Horacio Rodriguez Collaborates with Past and Present at Finch Lane 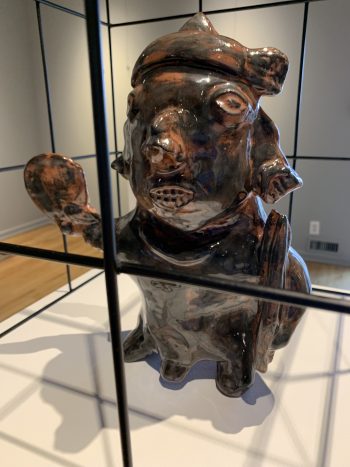 A family of three sculpted figures sits atop a pedestal. Ceramic renderings of pre-Columbian figures, the parents are separated from their child, who is encased in a cage. Sadly, we’ve grown accustomed to seeing tragic images of despair and suffering at the U.S.-Mexico border. Emblematic of President Donald Trump’s ill-fated family separation policy, which lasted from April to June of 2018 before being suspended via executive order, numerous reports indicated that the children separated from their parents were held in literal cages. The mere suggestion, let alone imagery, of this policy horrified millions of Americans and led to a public outcry.

Now, Horacio Rodriguez, professor of ceramics and a Raymond C. Morales Post-MFA Teaching Fellow at the University of Utah, has crafted a timely and thought-provoking exhibition centering on themes of immigration and cultural identity. His work, which deftly blends the old with the new, invites us to ponder the importance of visual culture in shaping our perception of class and national identity.

After graduating from Montana State University with his MFA in 2016, Rodriguez began his teaching fellowship at the U, where he began using the rather inventive process of recasting pre-Columbian art objects into ceramics using a 3D printer. As a culmination of the work done during his fellowship, his new show at Finch Lane, (Un)invited Collaborations with my Ancestors, aims to ignite conversations about art’s role in shaping and complicating our national identity. 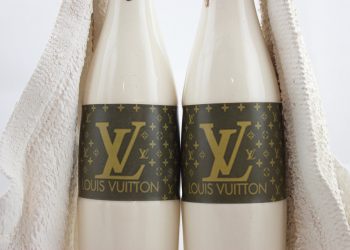 Rodriguez relishes the act of appropriation, his “1% Molotov Cocktails” series a keen example. Here, the eye-catching Louis Vuitton symbol is emblazoned across a series of crisp bottles with accompanying rags at their top. When placed in visual form, the union of highbrow capitalism and revolution appears instantly ridiculous. In others, Rodriquez uses a ceramic detail printer to place images such as the border wall and religious deities onto a ceramic surface.

In the past year, he’s applied a new focus to this practice of appropriation. “I’ve always been fascinated with pre-Columbian artifacts and their significance to my culture,” he says, referring to his Puerto Rican mother and Mexican father. After co-teaching a course with the architecture department, he became fascinated by the possibilities of re-creating pre-Columbian art objects with 3D printers. After scanning items within his own collection, he approached the Utah Museum of Fine Arts. In all, he scanned six artifacts from their collection. After making the scans, Rodriguez makes prints, which then form molds for his ceramic casts. Though copied in form from earlier originals, to Rodriguez, the slick, ceramic surfaces are now fresh canvases upon which to experiment in radically new ways. 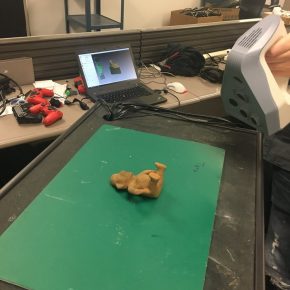 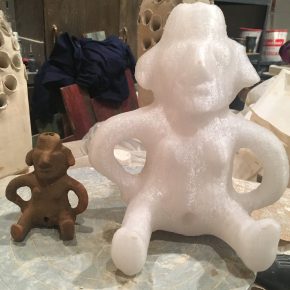 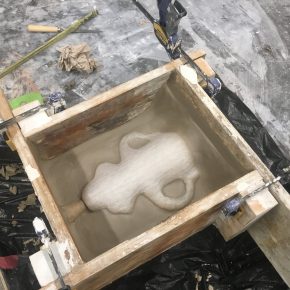 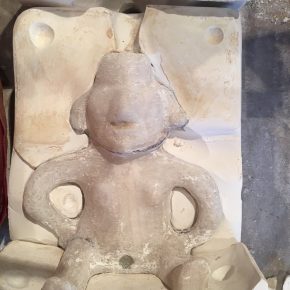 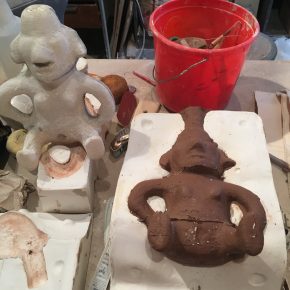 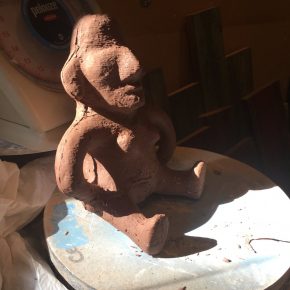 “I really like appropriating symbols,” says Rodriguez. “Of course, there are ethical dilemmas related to appropriating objects found in Mexican tombs,” he says. Many works in his upcoming exhibition are pre-Columbian heads that were discovered in the shaft tombs of western Mexico and later made their way into museum collections. Rodriguez noticed something interesting about them — a shape atop their heads resembled hats. This ignited another clever opportunity for multicultural appropriation. In Rodriguez’s ceramic reimagining of these works, entitled “Brown Boys for 45,” the figures wear Trump’s infamous Make America Great Again (MAGA) hats, a famously divisive symbol within modern American iconography. There’s something subversive about this act, which for Rodriguez came as a reaction to the trend of second- or third-generation Mexican-Americans who, decades after arriving in America, effectively embraced the Trump-era immigration policy.

While Rodriguez’s work presents a captivating fusion of old and new — forcing viewers to confront preconceived notions of art and culture—his work also challenges the role of the museum and gallery space as a seemingly neutral arbiter between the two. His satirical works are commanding; yet for anyone tormented by America’s political woes, they impart a palpable sadness. As our nation attempts to navigate a national identity in the face of extreme divisiveness, for many, the ability to look outside our own biases is elusive. As uncomfortable as this may be, Rodriguez’s work forces this upon us.