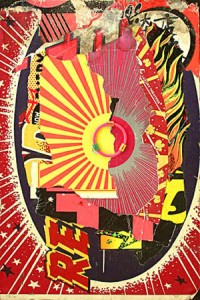 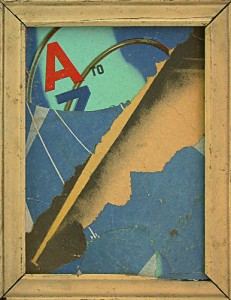 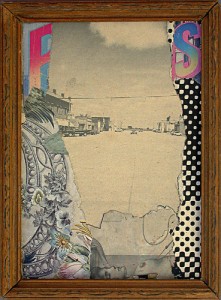 Sometimes life is stranger than fiction; something happens in our lives that we never could have imagined beforehand. In 2000, when I first met my cousin, Lee Worden, at a mutual cousin’s wedding, I knew little about his father, Adam, nor Adam’s partner Bhavani, or their children Lee and Anandi. I had heard the family had an herbal business in California, and that Adam was a very quiet, withdrawn man, but little else. I was excited to finally meet Lee, and to learn more about this part of the family. Being a professional artist myself, I was shocked and thrilled to find out that my uncle Adam had been a Beat Generation collage artist. Lee showed me a few fuzzy photos of his father’s collages, and gave a web address where he had posted some of the collages. I felt saddened that I would never meet my uncle, who had died the previous year.

On visiting the website, I was enchanted by the works’ gentle poetry, humor, and rich blend of patterns and materials. I saw that my uncle had a thorough grasp of collage, a sophisticated visual vocabulary, and a highly personal voice. Lee told me that Adam had been a self-taught artist; to educate himself he visited gallery and museum exhibits regularly and subscribed to art magazines. I knew I wanted to travel to San Francisco to meet my other cousin, Anandi, to see the work first hand, and to learn more about my uncle the artist.

In November 2002, I made the trip to San Francisco. On a sunny, still day Lee, Anandi and I pulled the boxes out of the storage unit onto the asphalt outside. Collage after collage, I was astonished at the work I saw. His juxtapositions of humor and tragedy, macro and micro, sacred and mundane, Eastern and Western – in striking compositions, colors, and spatial shifts – were genius. I saw that Adam did all this using scraps from everyday life such as comic books, wallpaper, candy wrappers, fireworks posters, paperback covers, and magazines. 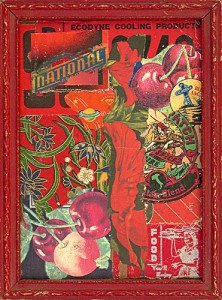 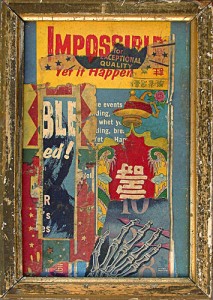 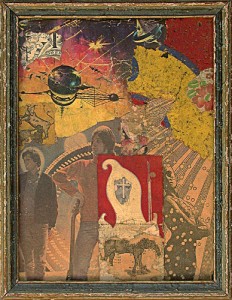 The Beat Generation visual artists took inspiration from the new surge of media and culture surrounding them. They valued immediacy and authenticity, uniting art and life by including materials and objects from their own lives into their collages and sculptures (“assemblages”). Collage expressed their urban experience of the simultaneity and melding of cultures. My uncle clearly was a virtuoso of this medium.

What began with my initial meeting of cousin Lee in 2000 resulted in two trips to San Francisco to see the work and photograph the collection. My effort, combined with the efforts of the Salt Lake Art Center and Lee and Anandi Worden, has now culminated in an exhibit which opened April 15 at the Salt Lake Art Center, entitled “Adam Worden: Collages.”

Here is what Jim Edwards, Curator of Exhibitions, Salt Lake Art Center, has to say in the exhibit brochure:

When Adam Worden died in San Francisco in 1999 at the age of 63, his entire life’s work as a collagist could fit in a half a dozen suitcases. Remarkably, in his quarter of a century obsession of creating mostly diminutive scaled collages, he never bothered to date, title, or sign them. It was as if he wanted his entire creative life’s enterprise to be seen as one continuous work, each collage a portrayal of a dream-like moment, ramified into a collective journey of mystical connections and widely diverse associations. Equally remarkable, considering the large number of collage works that he created, is the fact they were never exhibited publicly. This exhibition at the Salt Lake Art Center . . . represents the first ever public exhibition of Worden’s art.

Worden’s threadbare collages are the result of scavenging for inexpensive materials. They are exquisitely composed compositions and derived from a wide variety of material and sources. He was able to combine a funky Beat aesthetics with the utopian visions of the Hippie culture. One of the most distinctive features of his collages are their diminutive size, the smallest of which are affixed to business cards and measuring a mere 3 1/2 x 2 inches. . . . . His largest collage works are still modestly scaled, averaging 24 x 15 inches and fashioned from day-glo papers salvaged from billboards and fireworks stands. Worden tended to work in sets or series of related subjects or compositions. These included framed collages that feature apocalyptic visions, such as goddesses and bodhissattvas confronting characters from popular culture sources. In his unframed “ Diamonds” and “ Ovals ”, flowery wallpaper samples are mixed with magazine illustrations, snapped into a sense of balance through their beautiful articulations of color, image, and shape. . . .

Worden developed a very personal form of expression in his collage work. His place is idiosyncratically situated somewhere between Eduardo Paolozzi’s late 1940’s scrapbook of collages adapted from American magazine advertisements, and Joseph Cornell’s metaphysical box constructions. Worden’s life work in collage was the purist of pursuits, unadulterated by any demands imposed by an inattentive “professional” art world. 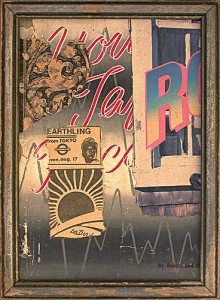 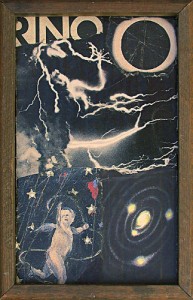 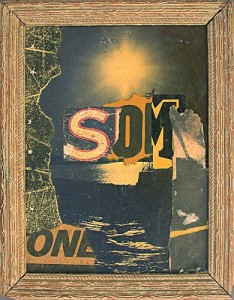 John (Adam) Worden was born in Lewistown, Montana, in 1936. He was raised in Lewiston, Idaho, the youngest of four children of the town’s mayor. He earned a bachelor’s degree in Mathematics from Whitman College, a private school in Walla Walla, Washington in 1959. After college, Worden moved to New York City to pursue theater, becoming involved in experimental theater and happenings, and immersing himself in the Beat culture. In 1964, he moved to San Francisco, where he began doing collages and assemblages, and met his partner, Bhavani, an herbalist and nutritionist. In 1969, they had Lee. Five years later the family moved north of the city to the Sonoma County, and that same year had a daughter, Anandi. In 1976, Worden began referring to himself as Adam. Bhavani died in 1986, and when his children left home in the early ‘90s, Adam returned to the city to be closer to the art world with its opportunities and exhibitions. He died in 1999, at the age of 63. 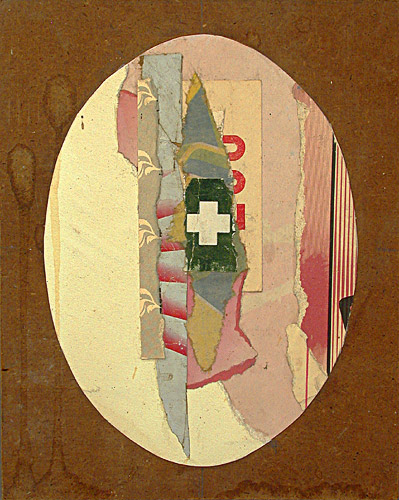 I still find all of this hard to believe – it seems surreal to me. Among relatives beyond his immediate family, only my aunt Judy knew what her brother Adam was up to, and it never occurred to her to connect the two artists in the extended family with each other. While I am deeply saddened that I never met my uncle, I am moved by his commitment to his work in isolation with no recognition from the art world. I am grateful for the privilege of seeing this work and playing a role in bringing it to the Salt Lake community. Many thanks to the Salt Lake Art Center for its commitment in curating and hosting this exhibit, and to Andy Hoffmann for all his work in helping create the book “ORBIT.” On a personal note, I am grateful for getting to know my cousins Lee and Anandi, and for their willingness to share their father’s work with me and with the world. 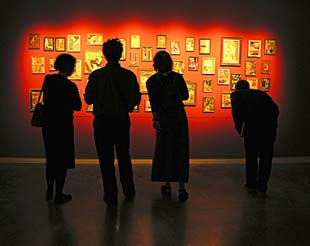 In conjunction with this show, Elik Press, Salt Lake City, is publishing a book with responses by poets across the country to Worden’s collages. “ORBIT: Collages by Adam Worden with Poems in Response,” will include 23 collages in full color. The book is $10 and can be purchased t the Salt Lake Art Center bookstore, or by calling Andy Hoffmann at 533-0197 or by email: ahoffmann@sisna.com.

The exhibit runs from April 15 – June 9 at the Salt Lake Art Center, in the Street Level Gallery.