Hidden Among the Bluffs: The Art of J.R. Lancaster 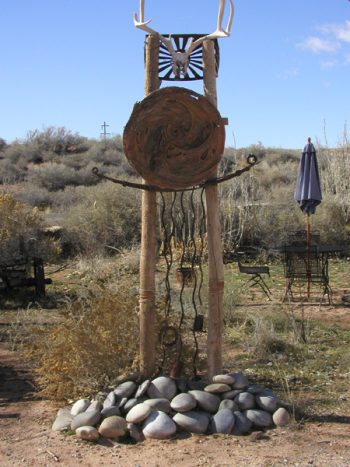 The first thing I noticed when I came through the well-aged door of Bluff’s Comb Ridge Coffee earlier this year (see May edition) was one of J.R. Lancaster’s assemblage paintings. Two rocks, one crescent shaped, the other resembling a distorted bell, appeared to be hanging just inches away from the painting, suspended by separate strings. I had to draw in closer to see if I was really looking at rocks or if this was refined trompe l’oeil work. I assure you, they were real rocks. In addition to the hanging rocks, other found objects — embedded in the thickly crackled work — seemed to be making an innocuous effort to stop, or maybe just disrupt, the flow of the image, which resembled an eroding land formation. 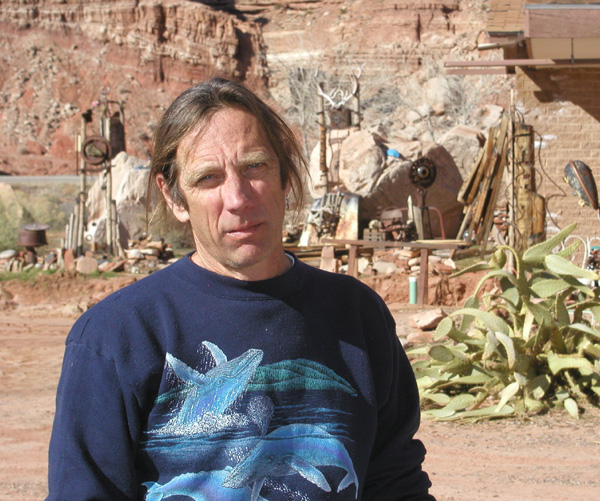 I left Comb Ridge Coffee with directions to find Lancaster. I discovered him at the other end of this small, remote town in the corner of southeastern Utah. He was working in his sculpture yard, a bare expanse that lies beneath 300 foot-high cliffs. Lancaster’s home/studio sits at the pivotal junction of routes 191 and 163, the two major highways etched into the desert landscape around the San Juan river. Lancaster likes to make his own playful mark on the landscape, though his are more easily removed than the asphalt snakes that serve as Bluff’s travel arteries. Look closely at the photograph of Lancaster in his sculpture yard and you’ll see a curious blue seal reclining on a rock just over his shoulder. The cliffs above Lancaster’s studio home are studded with found objects he has placed there, like the big blue Buddha that he has tucked 50 feet up and out of reach. The wedge of land where Lancaster lives and works is a visual playground, a vast outdoor assemblage of landscape and found objects that calls to mind the portable assemblages Lancaster enjoys creating when he isn’t inside painting or teaching photography workshops in the ever-eroding comb ridge canyons. 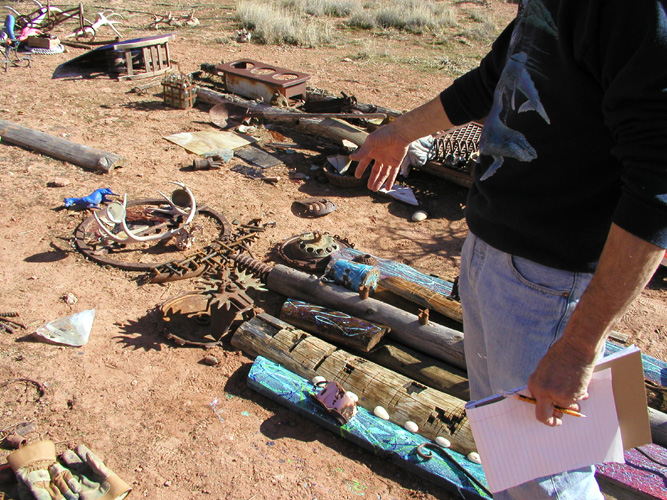 Lancaster points to work at his home/studio

Lancaster’s outdoor installation pieces and mixed media paintings include objects he finds and brings home from the old Navajo and Ute dumps. Disparate desert items such as old chains and pistons, deer antlers and pieces of glass lie around him in neat piles. He works to “give them another life” in his artwork using them as symbols that infuse his work with meaning. His current interest explores the familiar spiral image that is often found in prehistoric drawings painted on the surrounding cliffs. Lancaster describes the spiral as being an integral “part of the cosmos, the stars,” it is “about the movement of energy in all directions equally.”

Lancaster came to Bluff fourteen years ago after working on the Navajo reservation at Chinlee, Arizona. His assignment there was to take documentary photographs of medicinal native plants and prehistoric sacred sites in order to document the Navajo Long Walk for the local school district. The result is a booklet used to teach the children their history. Lancaster’s experience taking the photographs, “bouncing around the reservation, putting about 300 miles on the old four wheel drive truck, taking 3-4000 photographs,” developed his interest in pre-historic cultures and art, honed his photography skills and motivated his use of found object pieces gathered out in the desert to make something he calls a “visual story board.” 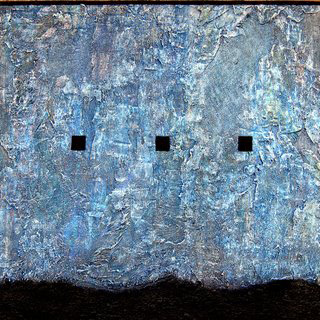 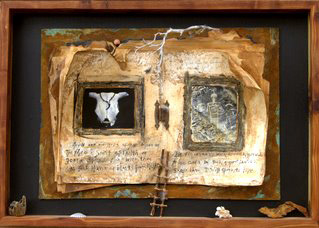 Before coming out West, Lancaster worked for eleven years as a petro-chemical engineer in Louisiana and still has the remnants of a charming southern drawl. He is very concerned about the number of people coming to this pristine and sensitive area of delicate land formations since the reopening of the area’s various mines. When he first arrived here, ten eighteen-wheelers might come through every day. Now that number is 500. Lancaster feels that the oil field exploration “has gone totally insane out here and nobody is watching.” It reminds him of Oklahoma and the East Texas oil fields — “there’s that many trucks and people . . . But what can we do, we drive the cars and trucks, we need the oil.”

His collective experiences motivate Lancaster to make art that includes a political statement and references prehistoric cultures. Rust is Lancaster’s favorite color, a fact evident in what he calls his “outdoor installation pieces,” found object sculptures that his collectors have been known to turn into water fountains. One of these distinct pieces stands at the west side of the parking lot at Comb Ridge Coffee, where he works as the gallery director and gathers his photography students before taking off into the area badlands. Lancaster’s art work has been exhibited nationally in over sixty galleries and museums, is part of the MOMA permanent collection, and appears in a number of corporate and private collections worldwide. But you don’t have to go that far to see it. A summer trip to this area of majestic buttes bordering the Navajo Nation will suffice. To find out more about his art or photography workshops, go to the Comb Ridge Coffee website.