Downy Doxey-Marshall has a tough time making up her mind. Lately, for example, she’s been signing her paintings “Downy,” but for years she fluctuated between “Downy Doxey” and “Downy Doxey-Marshall.” (She thinks maybe she’s back to “Downy Doxey.” Or not.) And while the youngest Marshall child has the name Brynn on her birth certificate, she is always called Bronwyn by her parents — the name Downy decided she preferred when her daughter turned 5. “I always liked both names and just couldn’t make up my mind.”

One thing Downy never dithered about, however, was her love for Todd Marshall. They met in 1985 during a six-month BYU Study Abroad in London. Downy, born (1964) and raised in Salt Lake City, the daughter of Roger Doxey, a real estate developer and Jewel Doxey, a professional homemaker and mother to five daughters, had been at the University of Utah since 1983. She was in London to study watercolor under Robert L. Marshall, Todd’s father, who variously had chaired the art department at Brigham Young University and directed its study abroad program in Madrid and London. Todd, born (1969) and raised in Springville, and not yet in high school (“I was a bit older,” Downy acknowledges with a smile), was also in London as a student along with his family that included his mother, Janice Marshall, four brothers and a sister. “He was so smart,” recalls Downy. 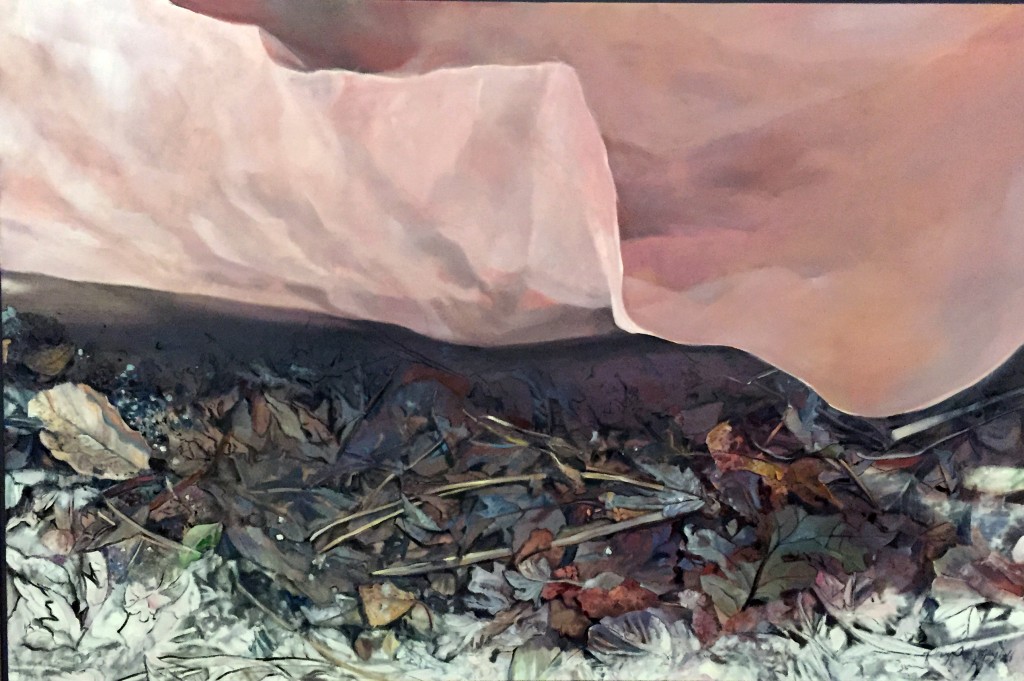 As Todd remembers: “I had seen a lot of great painters in my short life before I met Downy, but I hadn’t seen a better painter than she was. Never had I seen paint like that. I am a painter’s son. My father loved paint and loved to talk about paint. I watched him paint large watercolors in the 1970s and 1980s, late nights while watching M*A*S*H after the news and then staying up to see such beautiful marks and washes.” Todd spent many years in the studio cleaning and helping prepare canvas and frames and, when he was older, using the tools available there. “It seems like I have always been in an art studio,” he says. “I like paint.” His father “loved to teach as much as he loved to paint” and about every five years the family would accompany him on one of those lengthy BYU study abroad experiences. “Some people are called Army brats; I guess I’m a BYU brat,” says Todd. “There was Madrid in 1975; London in 1980; London in 1985, when I met Downy; and London again in 1995, with Downy teaching.” 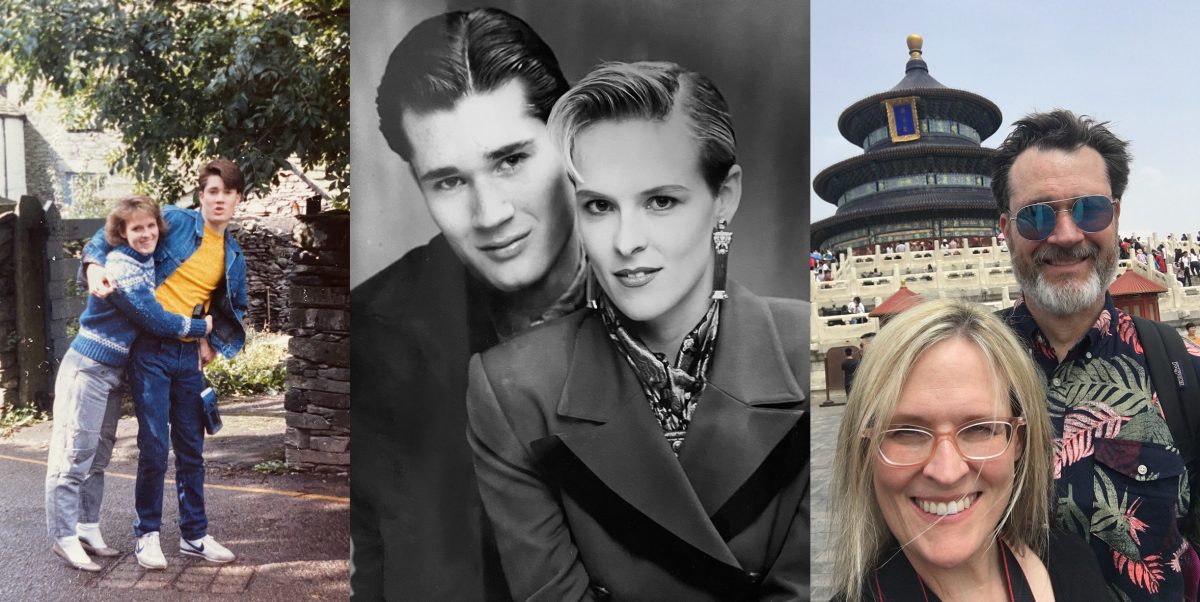 That fateful 1985 he was enrolled in classes “with my father teaching, and Downy was an exchange student from the U of U with a number of others. We started dating within a few weeks of meeting.” One afternoon, Downy cut the hair of his elder brother, Brent, and Todd asked her to give him a haircut, too. “When he sat down in front of me, I looked into those beautiful green eyes and I thought he had definite boyfriend possibility,” she says. “We spent many days exploring London, going to record stores and concerts. We had so much in common, we loved the same English ‘80s bands, spent many days in art galleries — the Tate was our favorite. We were always hanging out with a group, so it was easy to get to know each other as friends. Todd would watch as I painted and understood my artist heart.” On their first “official” date, she remembers, they walked through Hyde Park to the Royal Albert Hall to hear Tchaikovsky’s “The Seasons.” They discovered their seats were not together, so left at intermission to walk about the city. And Todd gradually became her best friend. 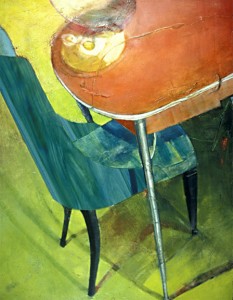 “Sunny Side Up” by Downy Doxey

They dated in London and did some “long-distance” dating on their return to Utah. “I knew it was a long time to wait for Todd,” Downy says. “We had a large phone bill because we talked every day.” (Back in the days when you paid big bucks to talk long-distance on landlines.) In 1988, Todd moved to Salt Lake City the day after graduating high school to attend the University of Utah where he studied film and sculpture; Downy graduated from the U that same year with her BFA in painting and drawing and began working for ZCMI designing windows and doing other visual merchandising. The couple wed in 1989. 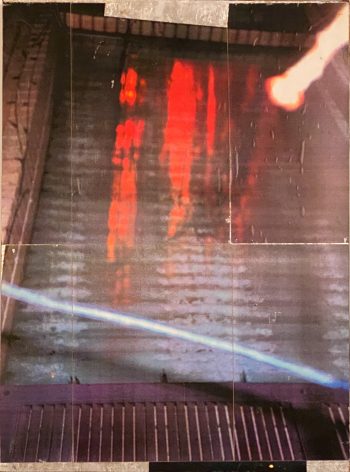 They lived downtown where they could stay in close touch with the art scene and were completely immersed in creating art and films. Todd built canvases for Downy and played records while she painted. They frequented The Tower Theatre and rented movies (that were blocked out by director, Todd remembers fondly: “Peter Greenaway, Atom Egoyan …” There is a huge yellow neon sign in their downstairs studio from Egoyan’s “Exotica.” Todd says, “Kids today say, ‘I just have the Janus channel.’ It’s not the same experience. I learned more about movies going through those films by directors …”). Downy had her first exhibit at the old Grunts and Postures store; her next, a one-person show at the Egyptian Theatre of enormous large-scale works of eight individuals from Park City miners’ families, children and adults, done from tiny photographs she found in antique stores in the resort town. You may be able to see them soon in the Park City Library Auditorium: stay tuned.

“We truly thought we could have it all,” says Downy. “We commuted to BYU while living in Salt Lake City. Todd was getting his undergraduate degree [BFA in sculpture, 1997] and creating multimedia installations [both partners were making creditable films together, some funded by BYU, and Todd was doing installations at the Springville Museum and elsewhere] and I was pursuing my graduate degree [MFA, 1996]. We took turns watching our babies [they had two boys by then] and attending classes. Todd is a fabulous cook and takes care of so many things so I can paint.” 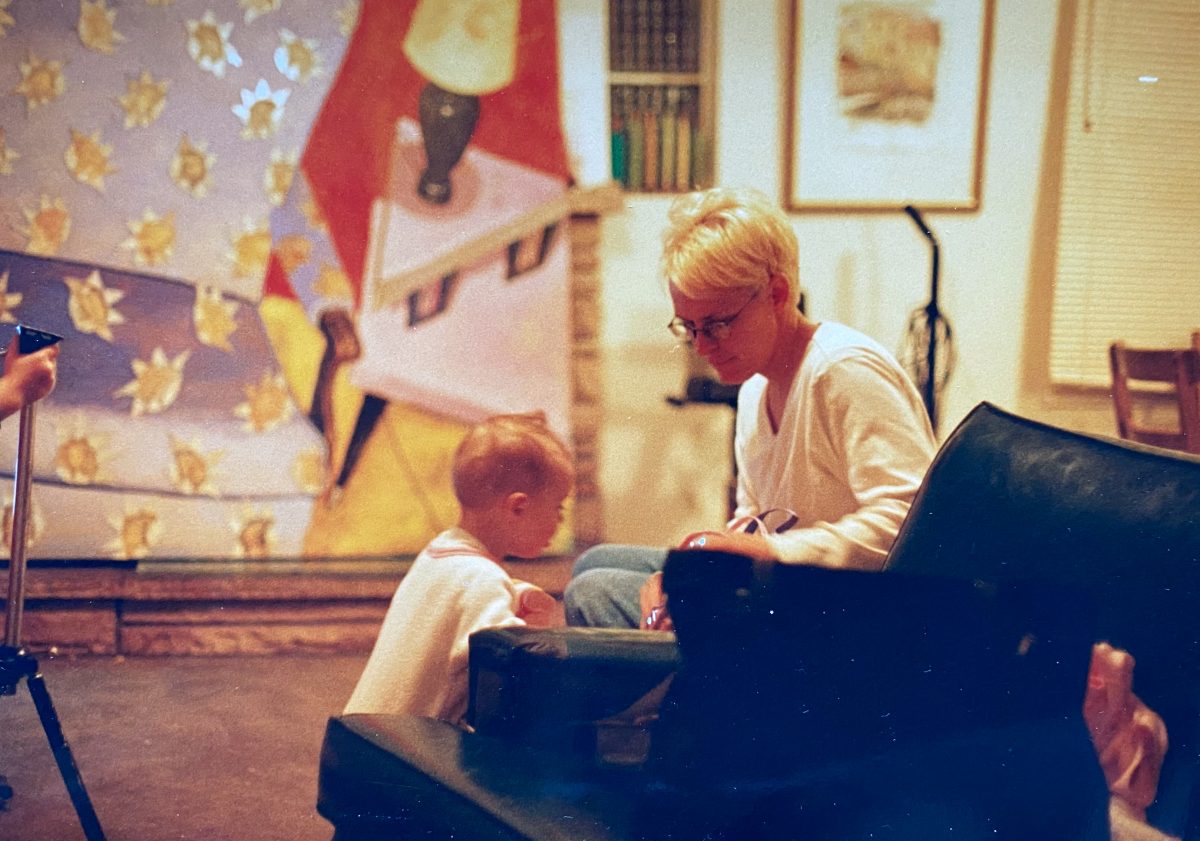 And paint she has, with a successful career including solo exhibitions from North Carolina to Las Vegas and a stint codesigning and painting the interior of the Provo City Center Temple (dedicated in 2015; other painters were Gary Ernest Smith, David Linn, Robert Marshall, James Christensen, Cassandra Christensen Barney and Emily Christensen McPhie) and inclusion in numerous private and public collections. Her vitae runs four pages — single spaced. She continues as adjunct faculty at BYU today and her work resembles that of Todd’s father, her teacher for so many years, to an eerie degree in both subject matter (the landscape) and close attention to fine detail. But the work is shifting, becoming looser and more abstracted. Her goal: “I want to paint these paintings where when you first walk in they look photographic but as you get closer they just disintegrate to marks, thick paint, stains, drips — so when you’re in front of it you just don’t know what you are looking at. You feel like you’re the artist, you feel like you just picked up a brush. You have all those marks and then you stand back and it all comes together. It’s about how distance affects your perspective. That’s my goal for 2020.” 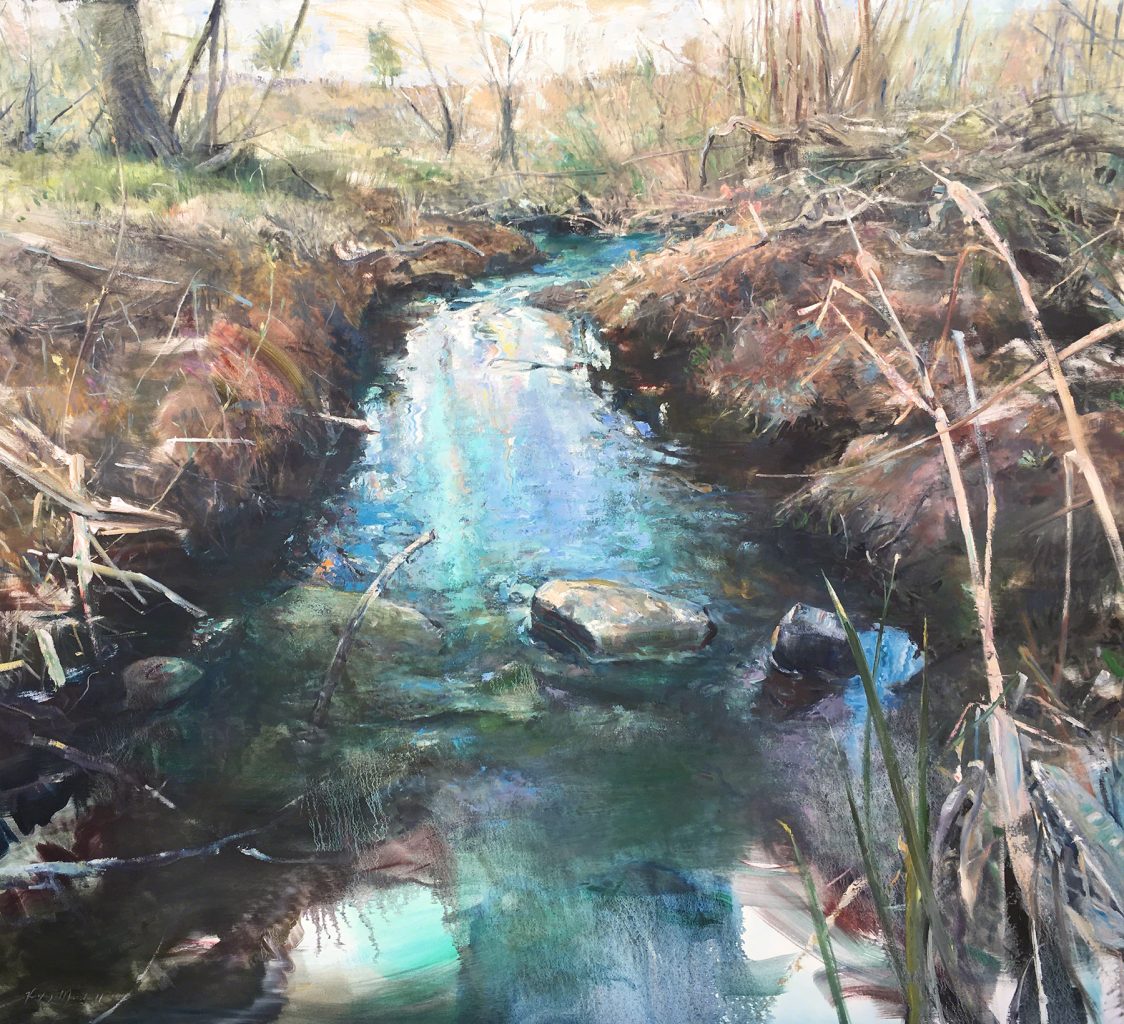 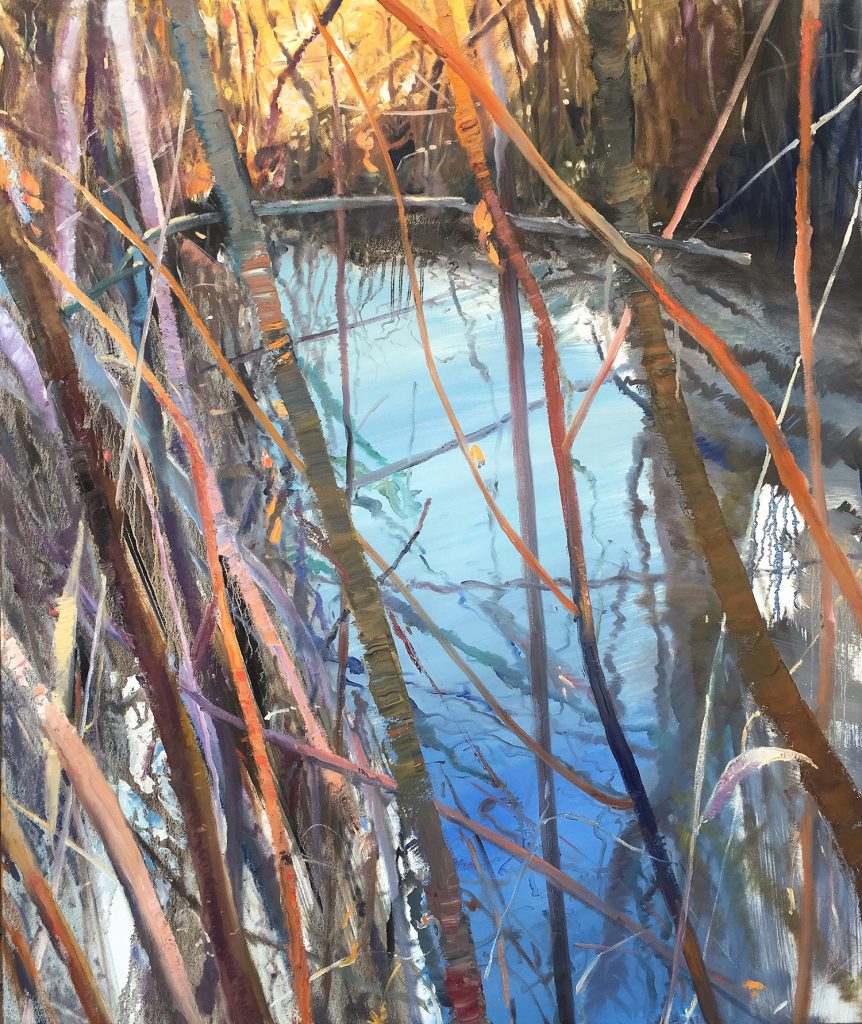 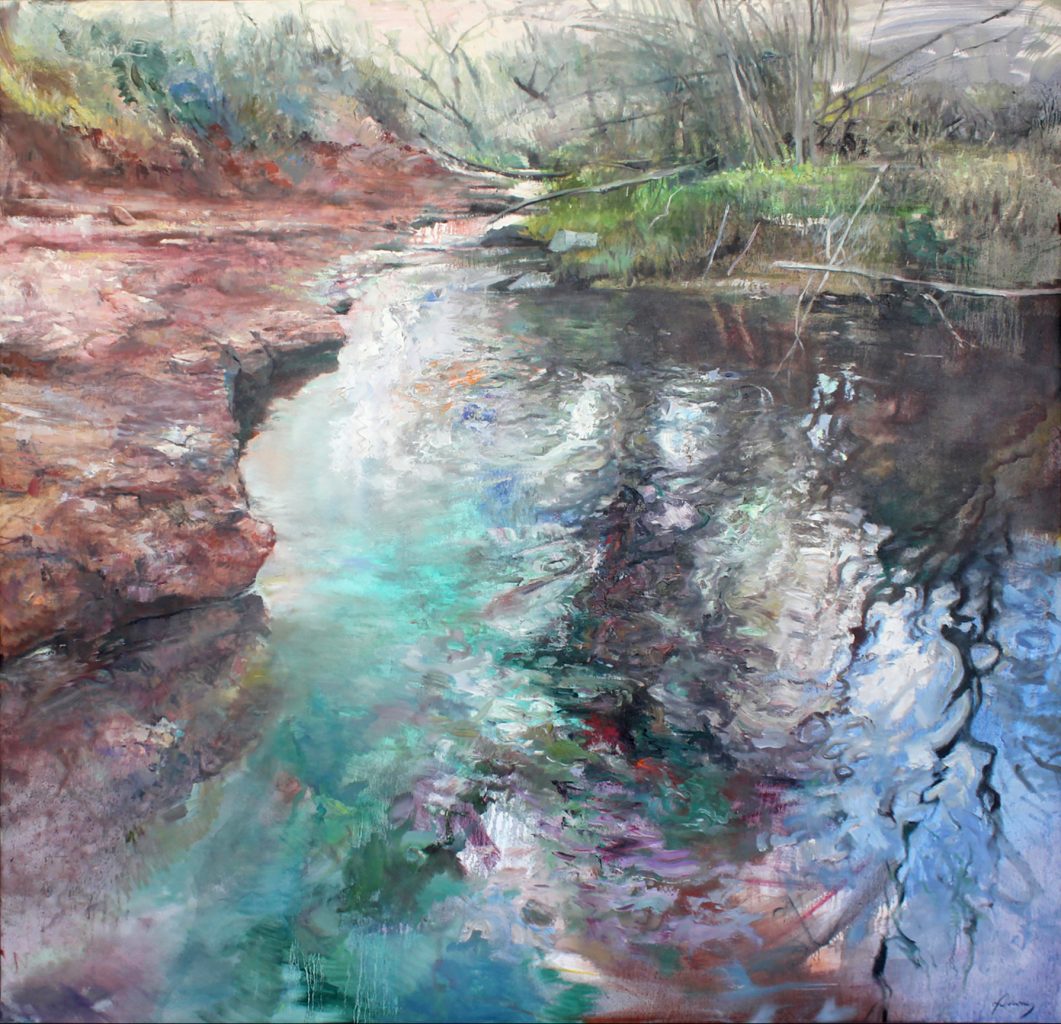 Todd’s path was different. Money was tight for the young family, so he began promoting Downy’s work and representing other artists on the side. With his brother, Eric, an attorney, he started Marshall Arts (now Todd Marshall Contemporary) and went on the road “hustling art out of the back of our van.” Hard work led to moving to Arizona and opening The Marshall Gallery in Scottsdale 20 years ago with partner DeeAn Gillespie Strub, representing mostly Utah and Arizona artists (Salt Lake City’s Jeff Juhlin is represented there today). Todd also worked for other galleries during their years there, including a contemporary art and Asian antique gallery that gave him the opportunity to curate exhibitions including work by Picasso, de Kooning, Reynolds, Rosenquist, Avery, Hatcher and others. They returned to Salt Lake City in 2002 to be with family, opened Marshall Studios and started printing and framing for artists including Gary E. Smith, Frank McEntire, and Eric Dowdle. “We ran Marshall Studios for three years in Springville and three in Salt Lake City until I went on the road for 11 years in sales … Sometimes you have to make some money, and art sales don’t always pay the bills. It got a lot harder for Downy to paint with me gone all the time and still picking up odd graphic design or film projects along the way.” 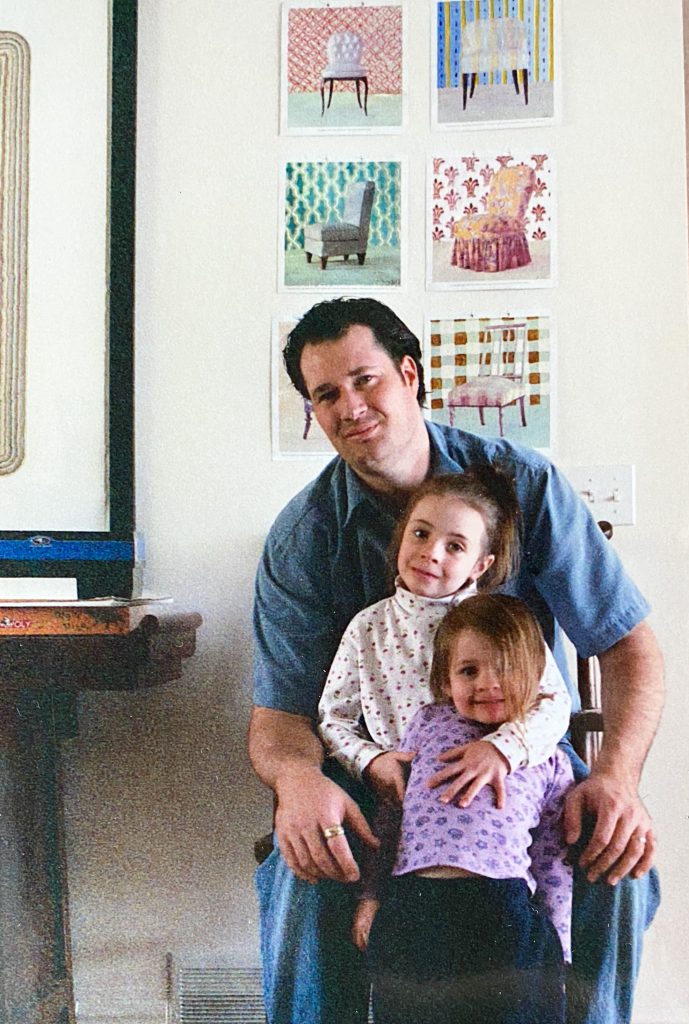 Life downtown lost much of its charm and was traded for cleaner air and better vistas nearer the mountains (practically bumping up against them, in fact). Todd has been able to work fine art sales from home and spends less time on the road now. In addition to encouraging him, Downy feels like she supports her husband by making a documentary about his life and work in photograph and film: “It’s an ongoing project,” she says. “But it explains what he does, how hard he works, and just how cool he is.” Todd has been acting in films, as well, and Downy has been encouraging that new direction in his life. 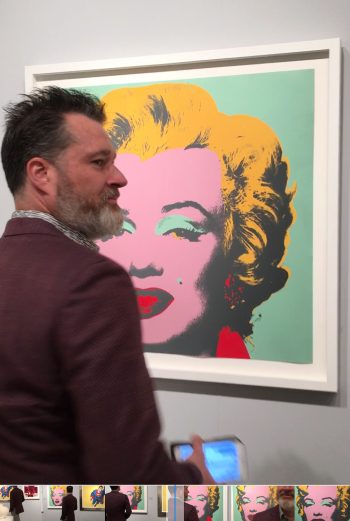 In 2009, the couple started CreekRoad Studios in Cottonwood Heights, specializing in fine-art printing, publishing and graphic design. And in 2018, Todd started Todd Marshall Contemporary, curating private and corporate art collections. He encourages the collection of art with a direction in mind. He also has owned The Memory Keepers, a digital transfer service that does scanning and DVD duplication, for a decade.

As their four kids have moved out, the couple have taken over their bedrooms for studio space: Music, film, paint are the priorities, just as when they first got together. Their home is filled with work by Utah artists, some of it sculpture, several breathtaking paintings by Robert Marshall, and work by Downy through the years: early egg tempera pieces; her furniture series; stitching pieces; oils; portraits; landscapes (including one of a series she did from the carpool window driving her daughters to Ballet West rehearsals from the canyon for 10 years) and a painting she is doing for a temple interior. A beautician’s chair with acrylic dryer hood attached sits in the living room — part of a collection that the artist painted some time ago. Parakeets chirp madly before a window. 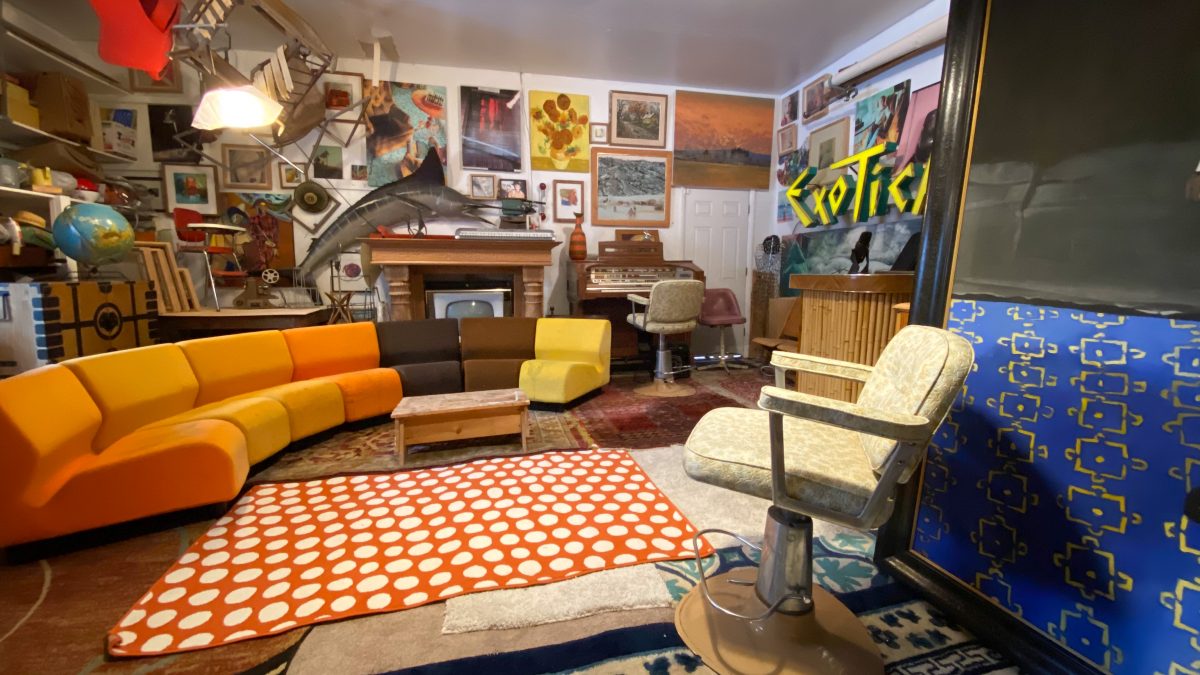 They even have a garage band now that the kids are gone — a guitarist, Mark Williams, vocalist Sue Thorup, and a classically trained organist, Susanna Graff Karrington, who hails from their romantic 1985 BYU Study Abroad days. (Susanna married Blake Karrington, both from their old London group.)

The Marshalls don’t play an instrument themselves; they’ve just always wanted to have a garage band. Now, it seems Downy and Todd truly do have it all. 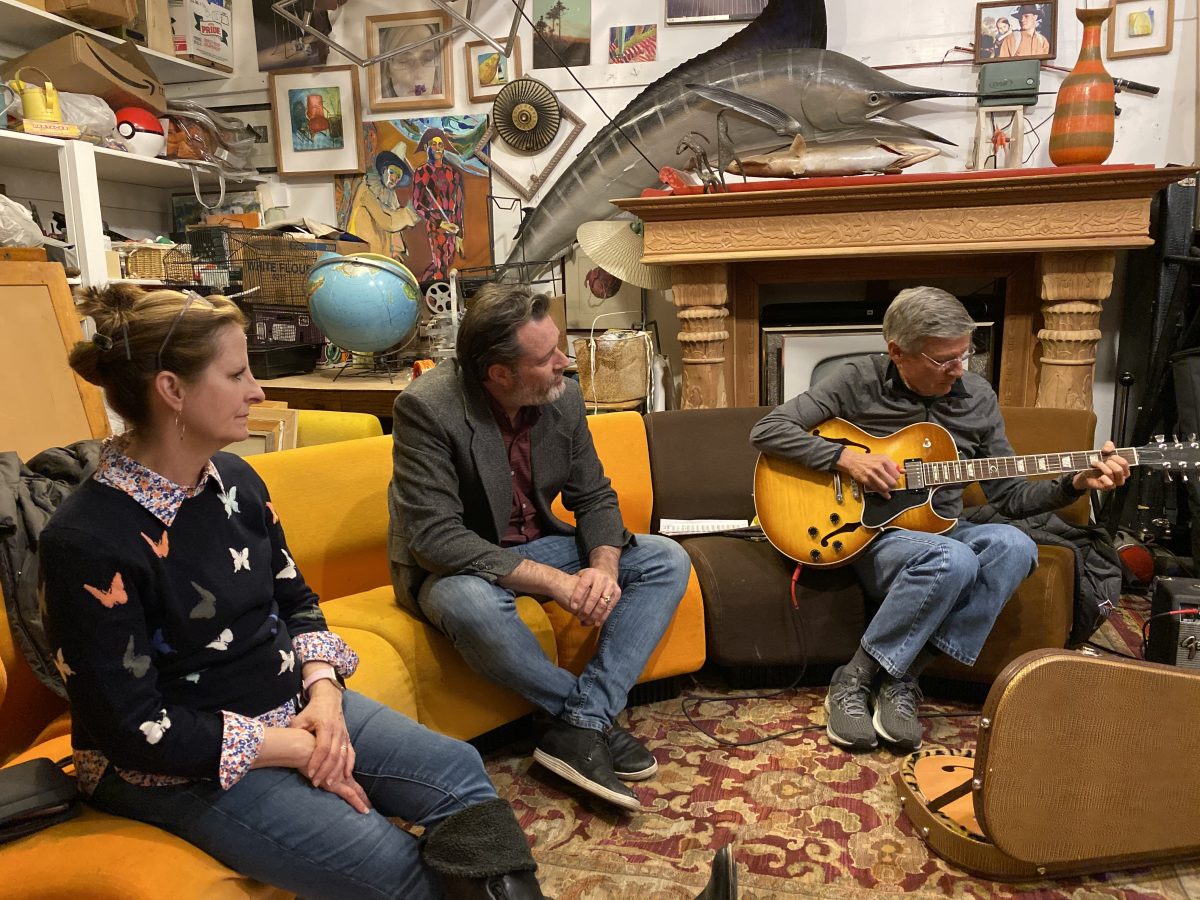