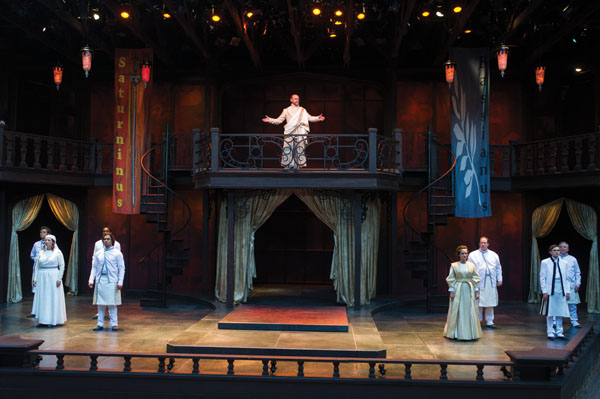 Gang rape, murder, cannibalism; the chopping of heads, hands and tongue; the unjustified stabbing by a father of both a son and a daughter. Titus Andronicus is not an easy play to watch. Staging it is no less difficult (which may explain why, in its fifty-one year history, the Utah Shakespeare Festival has only done it once before).

One of Shakespeare’s earliest plays, Titus is by far his most violent. Murder is common enough in his tragedies and histories, but no where else does so much of it happen onstage and with so little reflection. From start to finish Titus Andronicus is an unrelenting revenge play, with few sublplots or comic interludes to alleviate the unforgiving and bloody march through cyclical violence.  Any theatrical team that decides to stage the play (and what option does a festival that has promised to put on all 38 plays in 12 years have?) must decide how. Whether to do it straight or slanted. The first is difficult, since Shakespeare’s somewhat disjointed plot, outlandish action, and mostly undeveloped characters, provide shaky ground for a serious tragedy (plus, when the onstage maimings and murder have been played realistically, blood flying, audiences have been nauseated and even stormed out). But play Titus slanted and different problems ensue. Treat this gory and harrowing study of vengeance and madness lightly and you risk making life as cheap in our hearts as it seems in the play.

In Shakespeare’s tragedy, triumphant general Titus Andronicus returns to Rome bearing the spoils of war: the defeated Goth queen, Tamora, her consort, Aaron the Moor, and her three sons, are all his captives. To appease the people of Rome, Titus sacrifices the eldest Goth prince, despite the pleas of Tamora. He then becomes kingmaker when he names Saturninus, one of two contending brothers, emperor. But made-king and kingmaker are soon divided by implacable enmity. The emperor, who has been given the captives as a gift, frees Tamora and make her his queen. She, with her two remaining sons and consort, secretly plans revenge on the Andronicus family – Titus aiding them when he kills his own son, who, he feels, has dishonored him. After two more sons and a son-in-law are killed, his daughter Lavinia raped and her tongue and hands cut off, and Titus himself tricked into cutting of his own hand, it is the Andronichae’s turn for revenge. The plot ends in a cannibalistic feast and a pile of bodies that includes the Goths, the emperor, Titus and Lavinia.  This then, is the story of Titus that must be staged.

We usually remember a performance in terms of its actors, but the members of the artistic team that don’t appear on stage – the director and designers —  are always important to any performance, and here their roles become paramount, as the slant of the staging becomes an unsettling and unsettled visual narrative. The props of the play are a mix. To the relief of weaker stomachs, the bloody stumps of Lavinia and Titus are symbolically suggested by red tissue, as is the blood the two Goth princes cough up when their throats are cut. But the blood staining the bags holding severed heads and a severed hand (the last of which Lavinia is told to hold between her teeth) looks real enough. The costumes, designed by Kevin Copenhaver, also seem to play two angles. They are an anachronistic hybrid, loosely associated with their Roman setting, and deployed in a purposeful manner to reveal character traits. Chaste Lavinia, is clothed from wrist to neck in a dress that a Victorian matron would feel comfortable in, while the sensual and spiteful Tamora goes sleeveless. Titus begins in dusty but solemn attire befitting a general, but as he and brother Marcus, mad and distraught after the defiling of Lavinia, fight over the killing of a fly (a poignant but disturbingly comic moment) their casual wear calls to mind straight-jackets. But the costumes also hint that they might have been sewn with tongue in cheek. Playing on our contemporary connotation of the word, the Goths are dressed in black, feathers and incontinent eye makeup. The Andronicus sons, with their pajama-like leggings tucked in black boots, appear something like Marvel super heroes playing Roman soldier.

The most stunning visuals of the performance are reserved for Lavinia. When, in the final scene of the second act, Lavinia is revealed, newly ravished, her bloody and bandaged body slung between the Goth princes like a taught slingshot, the image is as frightening as it is pathetic. Her white dress/bandage, almost feather-like, gives the impression she has been flayed. The way she gasps and sucks for breath through the bandaged bloody hole of her mouth, and is reduced to swinging her useless, bloody stumps, is wholly unsettling. And Melisa Pereyra, as Lavinia, in one of the staging’s strongest performances, continues to unsettle throughout the play, as she pitiably sobs and hugs her father, or flays about near her frightened cousin. 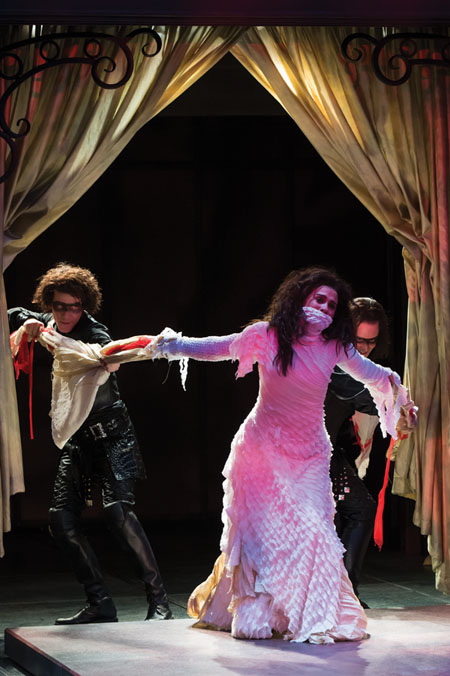 As they witnessed this scene in the first half of the play, the audience was rendered as mute as Lavinia. Appropriate to the pathos of the moment, and despite the prim nature of the symbolic presentation, they held their breath, some putting hand to mouth in an eerily mimetic gesture. Only after intermission, when the fly-swatting scene stirred relieving laughter, did this change. And the play itself had changed. With the help of her uncle Marcus, Lavinia discovers a way to communicate, and reveals the source of her tragedy, setting in motion a second cycle of revenge. And what seemed only hinted at in the play’s stylized costumes, a slight irreverence,  becomes more evident and pathos turns to bathos.

In Act IV, when Tamara and her sons come, as the text demands, disguised in an attempt to fool mad Titus, they have become ridiculous. The boys wear oversized heads that look like bloated versions of the Anonymous masks. Possibly they are meant to nod at the ridiculousness of the scene itself – the three Goths think they can fool the supposedly mad Titus into thinking they are the actual incarnation of Murder, Rape and Revenge.

And while, in the first half of the play, the audience remained silent at the pitiable sight of Lavinia, when she rises on to the stage in Act V –- where  the two Goth princes are now held prisoners by her father — the audience’s response is anything but mute. When, dressed in sleek, powerful red, Lavinia turns to reveal the large blades attached to her stumps, they let out a cheer. And their revenge lust is rewarded, as Lavinia (not her father, as Shakespeare’s script would have it) cuts the throats of her abusers.

One scene remains to make revenge complete. Here Lavinia is dressed in a crimson outfit that calls to mind the wardrobe of Star Wars’ Queen Amadala; and her father, who is serving up the bodies of the butchered princes as pies to the Emperor and Emperess, is in a cook’s outfit of matching red, and one feels as if we have entered a scene from Sweeney Todd. And appropriately enough, the murder continues:  with her consent, Titus kills Lavinia (to hide the shame of her disgrace) before dispatching his dinner guests, dying himself in the fight. His remaining son is declared emperor, and the play closes — in a slight shift from the actual text — with Marcus challenging the Roman masses with the refrain, “Have we done aught amiss?” And then, before the curtain falls, the actors make a funereal march across the stage, concluding with an orchestrated stomp of the feet and cock of the head, a gestural wink as if to say, “Wasn’t this fun?”

Marcus’ play-ending question might be that of the director, Henry Woronicz, to his audience. In the staging of the play, have we done aught amiss? If an audience gives itself over to the seriousness of this tragic story, should they feel cheated if it is played as camp?

And if that is what Woronicz has done, is he to blame? Had it been played straight, could anyone stomach the misery, or the gore? And is there anything else to be done with what the playwright has given us?

Considering the canon, Titus Andronicus is an intriguing play — it carries the germs of themes, images and characters that will come to fruition in some of Shakespeare’s best plays (look to Cedar City this fall for a much more powerful musing on revenge, Hamlet). But as a play, it is not completely satisfying. The tenor of the words and the action are hard to untangle.  Maybe that is because the play, as some have suggested, is the young Shakespeare’s fulfillment on a bet to outdo the bloody theatrics of his times.

Trepidatious about the sensibilities of a more refined, modern audience, scholars have made much ado about bloody Titus needing to be understood as a product of its time: when Senecan revenge plays were the staple of the Elizabethean theatre. But as this production suggests, we have no less an appetite for revenge-ploitation today (How else do you explain the success of the Stieg Larsson trilogy?). A contemporary audience nursed on the movies of Quentin Tarantino or Robert Rodriguez will find the stylized artistry of revenge in the Utah Shakespeare’s Festival’s Titus Andronicus readily familiar.

The Utah Shakespeare Festival continues through the summer. For more information on times and tickets visit www.bard.org