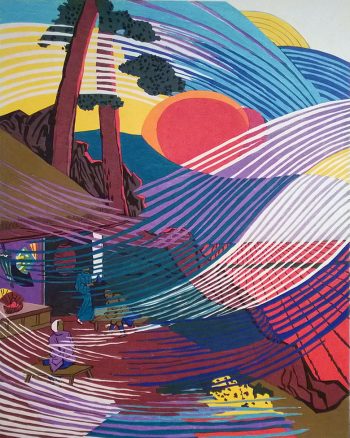 Stanton MacDonald-Wright’s Haiga Portfolio, 1965-1966, is an example of the artist’s most pronounced blending of Eastern and Western influences. Seventy-five years old when he did them they meld innovations of Western modern art with Japan’s greatest poetry. The term haiga refers to a style of Japanese painting done by haiku poets. Haiku poems are known for their extreme brevity and simplicity.  Each of the ten prints that compose the Haiga Portfolio have a corresponding haiku written by one of Japan’s most important poets.

In 1913 Stanton MacDonald-Wright and Morgan Russell cofounded the early 20th century modernist movement Synchromism. Synchromism sought to arrange color in the same way that sound is composed in music and is considered the first American avant-guard movement to be accepted internationally.

Instead of using the subtle spare painting style of haiga artists MacDonald-Wright employs the use of energetic swirling shapes coupled with dense vivid colors orchestrated in the modernist style and rhythm of Synchromism.