Hadley Rampton Paints Her Way Through the Pandemic 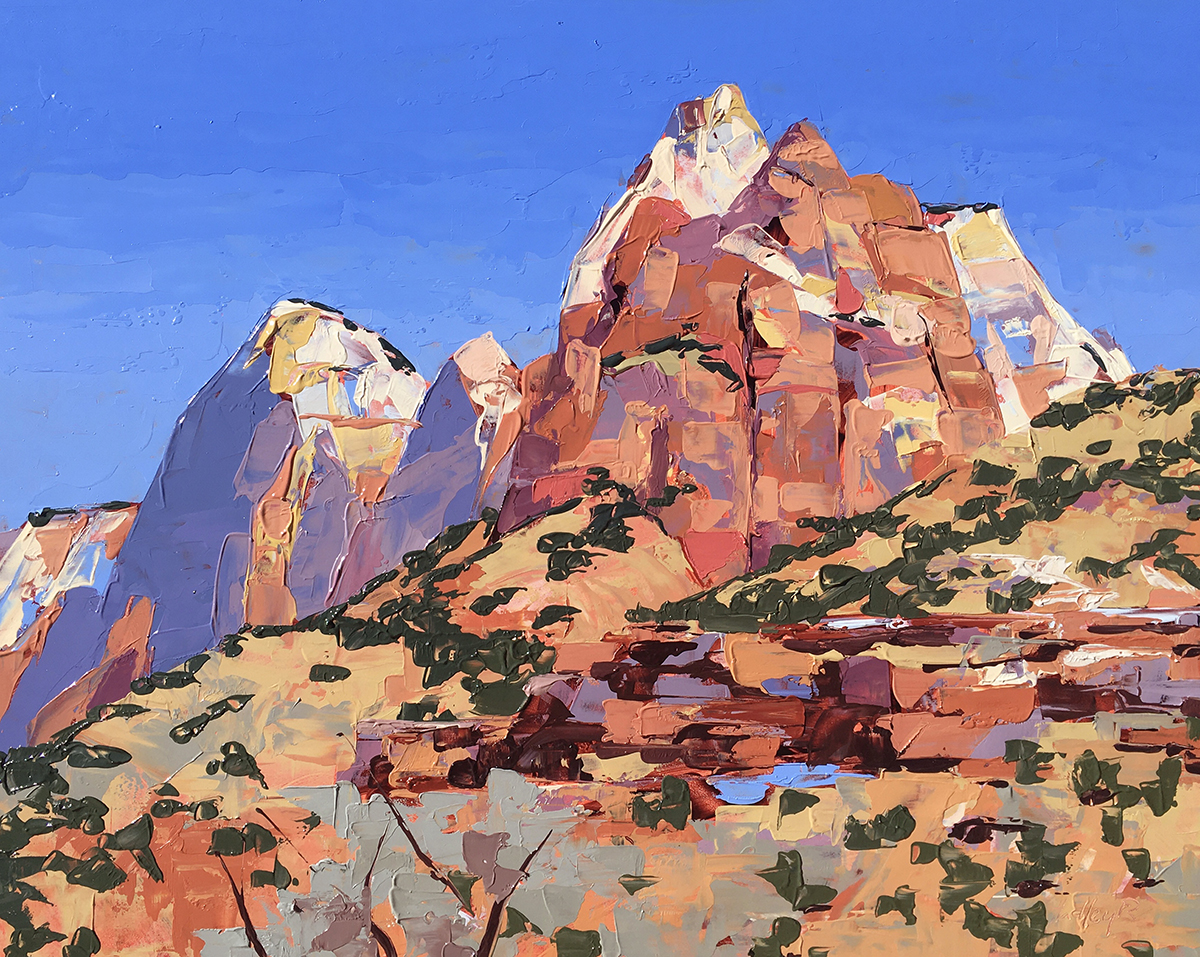 Hadley Rampton, who paints en plein air accompanied by her dog, Phoebe, primarily in the Rocky Mountain wilderness she loves but also (sans dog) in town squares and picturesque alleyways around the world, learned a couple new lessons about (and from) Utah’s scenic backcountry during the Pandemic: that a little abstraction adds a deft touch to an otherwise perfectly painterly vista drenched in realism; that she can loosen up a tad without losing control – something she says she has worked toward much of her professional life (probably not, however, since the age of 9 — which is when this artist began formal art studies. But, certainly, for some 22 years of setting up easel, canvas, palette and paints out of doors.) She has gotten bold and authoritative with her palette knife – digging deep with a surprising energy and focus that seems more an immediate response to what lies before her than a considered mark-making technique. It serves her well. She says when she paints rocks on Masonite and applies her knife it feels like she is sculpting them with clay. 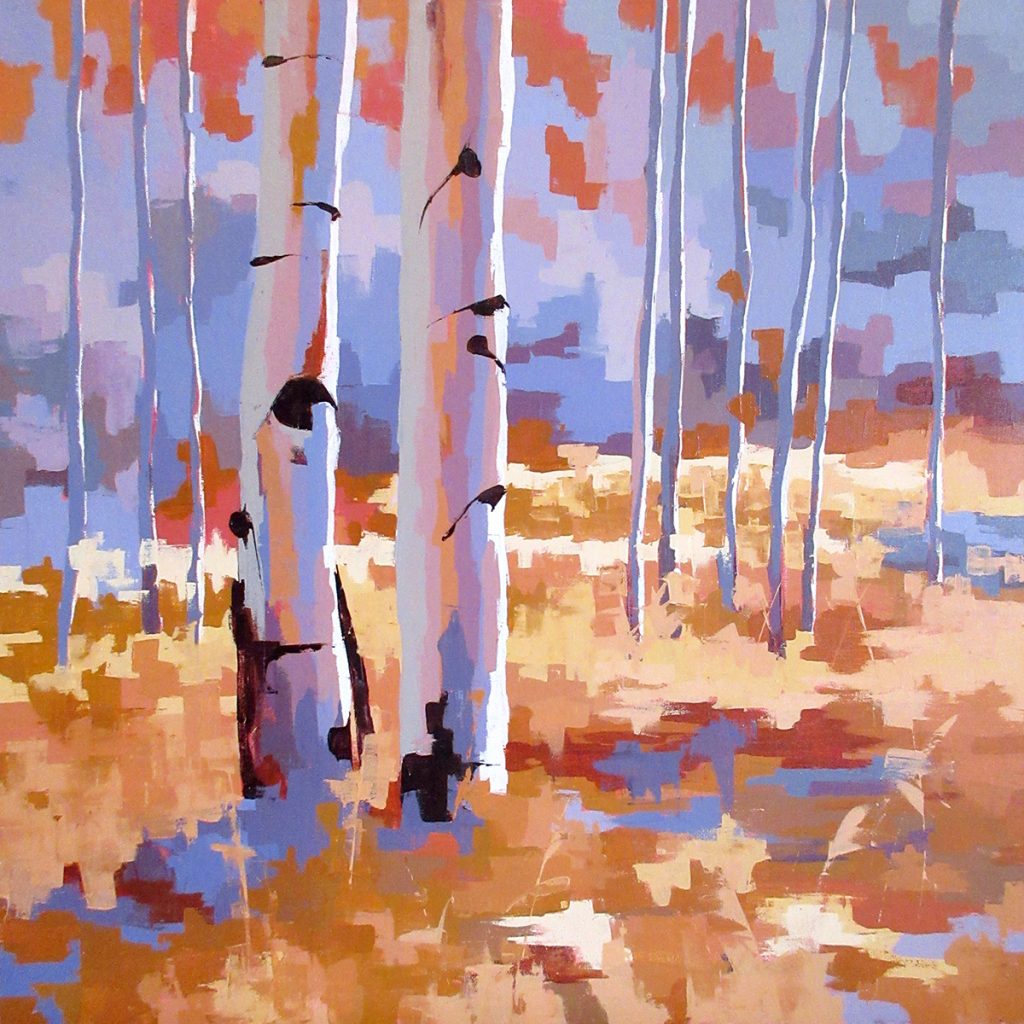 There is an electricity to this current body of work of Rampton’s now at Phillips Gallery (paired with Edward Bateman’s reimagining of Utah mountains).  It’s deep and fresh with very little that comes across as “done before” although the subject matter has necessarily remained much the same. (Someone commented on the similarity of her colors, but her palette surely is limited by what she can carry; also, perhaps, by choice.)

Her work has lost a bit of the mannerly, “just-so” quality that distinguished it; it has become less cluttered, simplified in subject matter as well as brushstroke. Her near-perfect painting of two aspens (hanging behind the desk), or of three of the trees in the east gallery instead of a grove of them helps prove the point. They sparkle. This brilliant artist is finding her path, giving authority to her voice, letting her emotions, rather than her brain take the lead. (Rampton once told our late critic Ehren Clark that she couldn’t decide whether to “give authority” to realism or to abstraction in her work – that “their juxtaposition was intriguing” to her.) These days she seems to be putting less thought and more emotion into her process. She doesn’t stress over tools and blending strokes (or not), but rather just lays it out in a considered manner that trusts her considerable training and fine instincts to get it right. 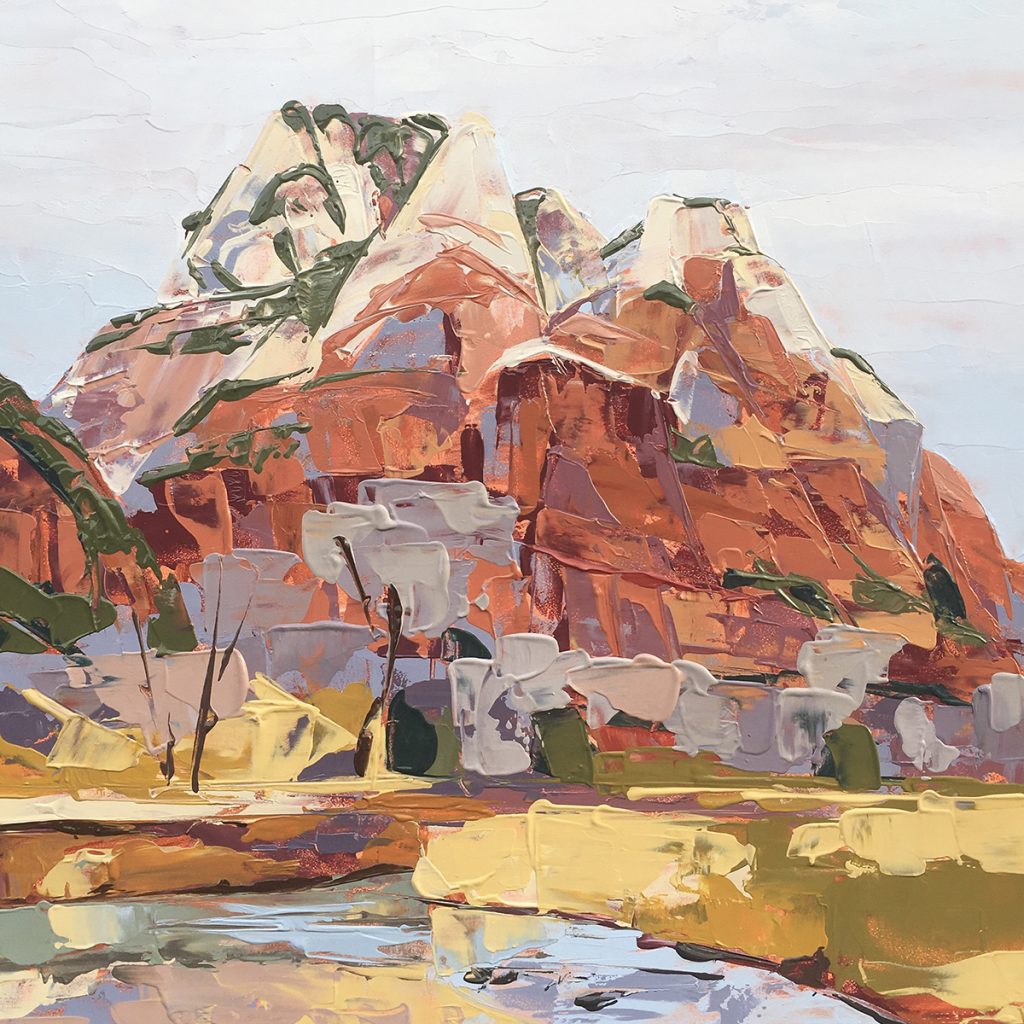 Rampton’s strong 12 x 16” travel sketches, done mostly on-site in watercolor and ink in locales around the world have always proved intriguing. Because Rampton has a fascination with history and a curiosity about and sympathy for our less-fortunate global neighbors, her focus is on such places as Trinidad, Cuba; Zanzibar; Slovenia; Firenze; Morocco; Santiago; Kosovo; Macedonia; Armenia; Budapest and elsewhere and the people who inhabit them (she does such telling figure work). Some of these were painted with a difference, though. When Phillips Gallery, where Rampton works as well as sells her work, shut down during the Covid crisis, the artist went into something between a tailspin and depression. Freeze Creek in Emigration Canyon has always been her refuge and painting it was therapy, she says. “It gave me purpose,” she explains. That led to the work in this show on Masonite. Come winter, when she couldn’t get to the mountains, and couldn’t journey outside the country either, she turned to her journals and photos covering 20 years of travels. “It was really moving because I not only went back to the moments of time in these pieces [hanging on the gallery wall] but to where I was in my life.” She talks about arriving in Rome in 2010 after helping a friend with a school project in Tanzania, “at the time, the poorest place in the world” and Rampton’s first experience in a Third World country. She found herself reflecting on that experience, on Western privilege and wealth, and believes other people gave thought to these things as well during the global Pandemic. 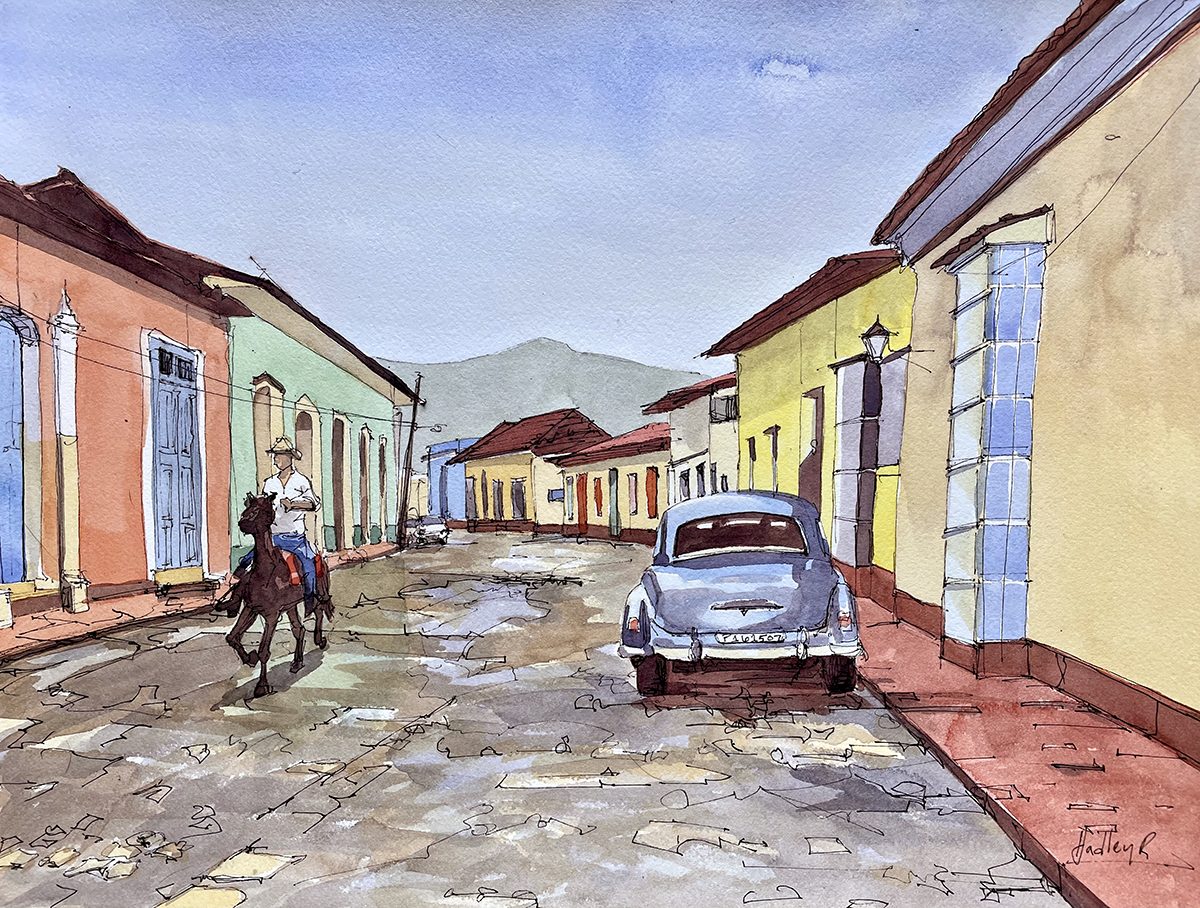