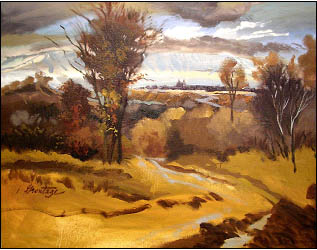 The Groutage Gallery opened in March of 2005 as a way to showcase the work of Groutage as well as a number of other artists connected to the Utah State University professor. Though Groutage is well known in Utah, especially through his long relationship with USU, before the opening of Groutage Gallery his works were hard to see in Salt Lake City. Consequently, the two exhibits of Groutage’s work held over the past year were great successes.

Now approaching 82, Groutage is inextricably linked to the Utah landscape through his work in watercolor, oil and acrylic. In the 1960s, as head of the art department at USU, Groutage formed a creative alliance with Alvin Gittins at the University of Utah and took art students from both schools to study and paint in San Miguel de Allende, Mexico. It was the beginning of a lifelong fascination with Mexico for Groutage. But it is the Utah landscape Grout loves. His moody northern Utah skies and stately interpretations of the redrocks of southern Utah have become the standard by which Utah landscape painting is measured. He has worked from studios in Hurricane and Logan for more than 50 years and As It Was will include never before exhibited pieces from the artist’s private collection that will be offered to the public for the first time.

“The challenges of the forms, colors and climate of the Utah landscape offer an unending supply of interesting subjects,” Groutage said in a recent interview.

Groutage Gallery has offered a range of traditional oil and watercolor landscapes, as well as a variety of contemporary styles and mediums. Over the past six months, Groutage Gallery owners Dee Malan and Kim Larkin began to branch out from the original concept of a gallery showcasing works by Groutage and his students or artists otherwise connected to him. The gallery, which is located in Sugar House next door to the Rockwood Studios, has recently been home to exhibits of art brut, contemporary found object assemblage and contemporary photography. To date, shows have included work by Paul Butler, Adrian Van Suchtelen, Steve Kropp, Brad Whalquist, Steve Rasmussen, Darryl Erdmann, as well as a variety of ceramicists and emerging artists. 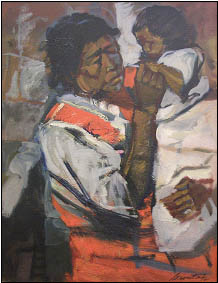 Despite the commercial and critical success of the gallery, Malan and Larkin have decided to close the gallery so that both can pursue other interests out of state. Before doing so, however, they have returned to the roots of the gallery for one last exhibit of Harrison Groutage.

“This is a very important show for Harrison Groutage Gallery; it could be the last opportunity the public has to view and collect his paintings,” said Malan.