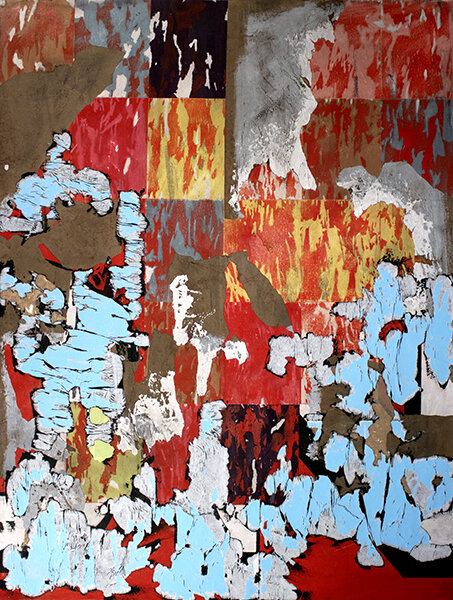 The puzzle throb in the work by painter Steven Stradley at “A” Gallery is asking for solution, and, at the same time, for no solution but gravity. You feel drop from North to South, continual ambitious crossing from East to West. And back. And, unraveledness, exasperation.

Through them all there is the even, reassuring pulse of woven things, the artist’s mental loom; the horizontals and verticals in these paintings, the longitude and latitude, are bass rhythm. Strong. You could swear there’s fabric in these paintings, or the imprint of fabrics, of mummy wrap or even discarded spacesuit-fiber technologies.

When you see the languorous, graceful shapes of flames in these collage-and-acrylic paintings, in works like “Dissolve with the Intent to Rebuild” and “Sometimes it Feels Like Hell,” you feel both alarmed and reassured. Flame as anger? Flame as purifying curative, as cauterizing? Or flames threatening, the flames of vast swaths, whole states even, sparking into flame during a wildfire season; the flames of crematories? This work emerged, according to the artist’s statement which accompanies the show, “in relation to the past year (of) upheavals … the work moves between the processes of being built and excavated …” 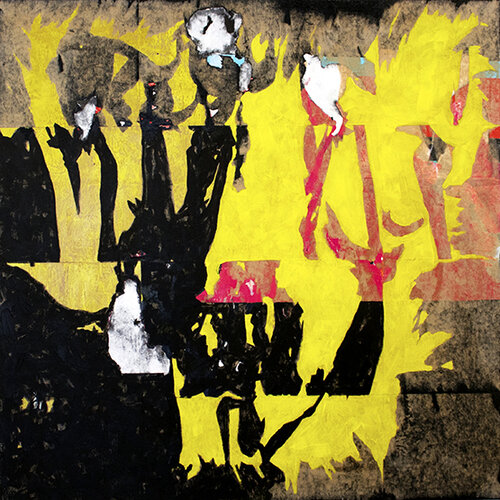 The title for this group of work is “Current State” and that title, too, is laden. Current, yes, suggesting now; but also, current drawn from power (political power, in question, in flux?). Current state could express a dormant wish to change one’s geographical state; or status of an electrically charged vehicle, charged amply or non-amply; or a self-diagnosis of peril, or hope, or doubt. Or a seaman’s assessment of how strong waves or currents are in water; whether you will catch many fish, or make it home.

Stradley’s paintings with black edging into them, and through them, are the strongest ones in this group. When his land-mapping looks edgy, merging and remerging, it is because black is behind them, making them look like continents which were not simply surrounded in random patterns by water — but as if they have swum up from the deep, earning themselves. 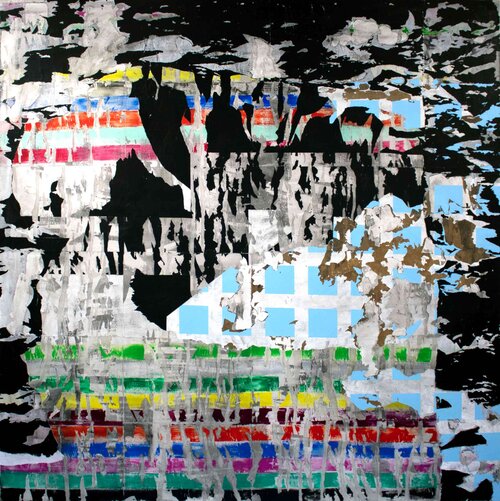 When black surrounds them, as in what may be the strongest (and largest, 72 x 72 inches) paintings here, “Perpetual Struggle” and “Dismantling the Oligarchy,” you sharply feel the dark deathiness of ocean, your gratitude for land. Air, breathing, oxygen equal our life. Yet, this black is also the ocean darkness for those Americans who were carried across, by force, home lost to them forever. The color of very deep, unlit water at night. Even those who chose to go to America, must have wondered, looking over dark water, if they were fools to choose a re-start of fate.

And black is the color, of course, of carbon, the carbon strangling our planet and our air, tilting us into flames, global warming, danger. And black is also just black, an enriching, and dramatic color: an artist knows it makes tangerine oranges, flame oranges, cardboard-box browns, dirty golds, berry colors, mottled whites, mustards, Pacific blues, even the neon colors of text highlighter pens — all colors Stradley has used here — more. 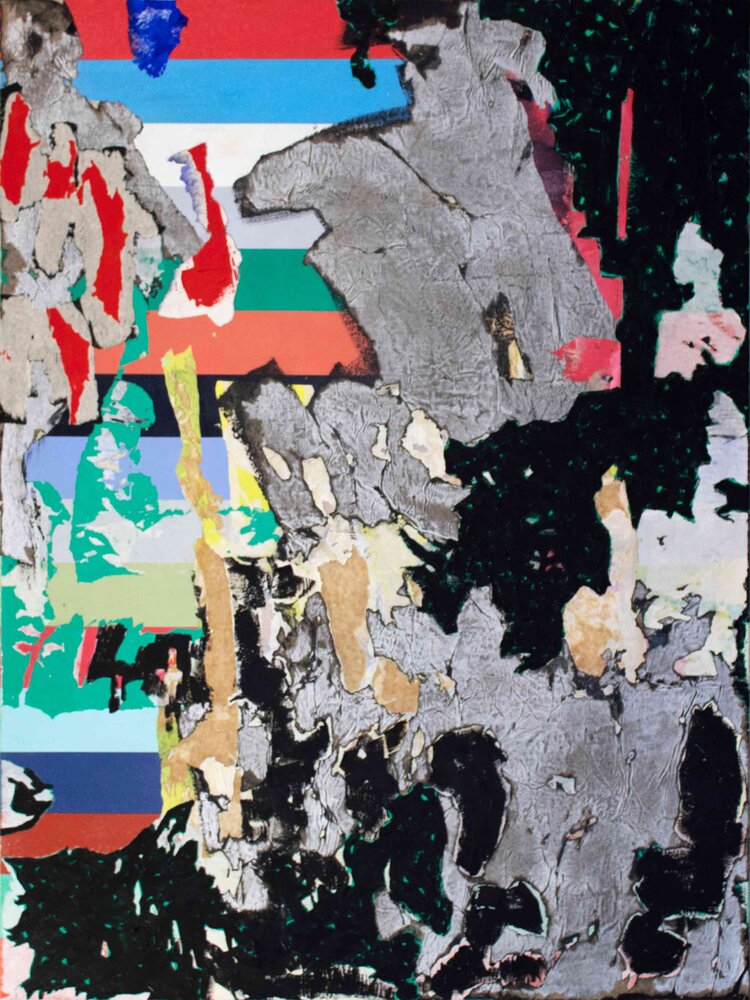 It’s interesting how the shapes, over and over, of great lakes, continent edges, dull boxy state outlines, the charged magic and charged constrictions of fate/geography, cry out for the shape of a human, not just their strong, implied likelihood of being there. These, all told, do seem almost the fevered dream of an ocean castaway. And so in the “A” Gallery, a carved marble bust of a woman, by Ryoichi Szuki, called “Tide,” is lovely, dreamlike, comfortable, in front of Stradley’s “Restructuring the Status Quo”: it looks as if she is dreaming the painting.

“Restructuring of the Status Quo,” despite its title, despite its intense, true reds, is almost peaceful; it’s much less turmoiled than, say, “Trying to Break Down Barriers,” which invokes a double-colored cross-grid, similar to over-grids also used by Stradley in “Perpetual Struggle” and “Finding Reality,” the grids as vociferous as cries of “Objection!” in court. The warm grays which fill portions of “Status Quo,” filling the warmly gray, fat, broad shapes of nations or savannahs or deserts, have the actual ridginess, and shading, of elephant hide. 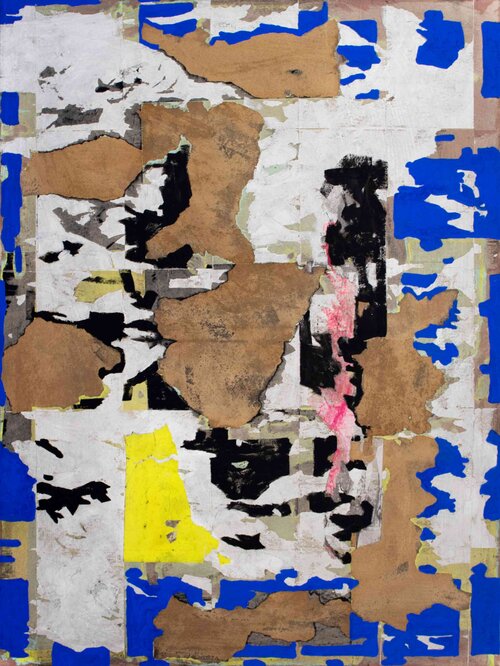 “Raw, Again,” also, despite its title, conveys peace, promise. Its cobalt blue is mixed with browns and soft, soft greens, and there is a lack of clamor in its arrangement, a feeling of settlement, despite wound-pink striations appearing like a depiction of a significant flood, and another area, like a separate nation within a nation, expressing itself as brightly discordant, neon yellow, as if its mission is to prevent false sweetness.

Land-shapes are the color of mature brie in “Dismantling the Oligarchy.” A brie-gold which even holds calmly holds up to glistens, abrasions, tackinesses, penned circles, the look of flowing smooth liquids which have dried, erasures; sandings, the look of rough history, and tough newness.

We are durable, say these paintings. Give us (almost) anything. Give us liberty, give us death. Give us anything. We, America, must/may/will find a way.

Tagged as: "A" Gallery, Steven Stradley