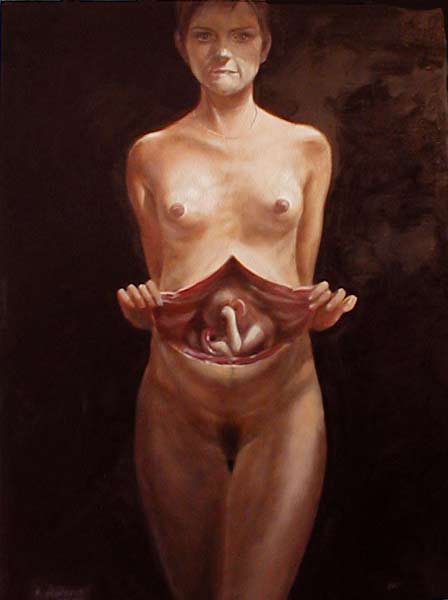 With galleries all over town exhibiting group shows full of small works for tonight’s Gallery Stroll, it will be hard to determine what to go see. There’s just so much work out there. One piece you won’t want to miss, though, is Nathan Florence’s “Gravitas” at Slusser Gallery.  The painting, which is being exhibited for the first time in Salt Lake, was recently the centerpiece of a controversial court case — Florence v. Shurtleff.

In 2005, then-Governor Jon Huntsman signed H.B. 260, a bill that would restrict access to online material that was considered “harmful to minors.” The law empowered the Attorney General’s office to create a list of websites with material deemed inappropriate. It also required websites to have ratings similar to movies. Many parties saw the bill as vague and problematic, fearing that the inexact science of Internet filtering might block artistic nudes, as well as bookstores that sold The Joy of Sex (not to mention media outlets like ours that reported on either). The American Civil Liberties Union (ACLU) of Utah joined the fight because they were concerned H.B. 260 would limit free speech.

Nathan Florence became involved in the litigation when a friend of his invited him to join the fight. “They were interested in having an artist who could be part of this case who was a more traditional, figurative artist,” he says. The case stretched out for seven years, and during that time “Gravitas” made an appearance in court. Florence laughs when he says the painting was selected, “to represent my depraved nature and to demonstrate the kind of thing children would be subjected to. Which is ironic because of all my pieces, this is the most referential to art history.”

When he began painting “Gravitas” Florence had recently returned from London, where he’d been inspired by Leonardo da Vinci and other classical artists who paid tribute to the human form. His wife Marian was pregnant at the time and he decided to celebrate his growing family while expressing the anxieties of being an expectant parent. “Doing the piece was very therapeutic,” he said, noting that her expression is meant to be tentative.

The work depicts the artist’s wife fully nude, and Florence wanted to have the freedom to show the image on his website without fear of having it blocked. “Viewing art, like listening to music, is changing so much because of all this access. You’re not limited to a brick and mortar building anymore. I would guess there are more artists today who are surviving as artists because they can sell their work online,” Florence says. He was joined in the suit by the American Booksellers Foundation for Free Expression; the ACLU of Utah; the Association of American Publishers, Inc.; the Comic Book Legal Defense Fund; Computer Solutions International, Inc; the Freedom to Read Foundation; The King’s English Bookshop; W. Andrew McCullough; Mountain Wireless Group, Inc.; the National Association of Recording Merchandisers; the Publishers Marketing Association; Sam Weller’s Bookstore; the Sexual Health Network, Inc.; and the Utah Progressive Network.

In May of this year, U.S. District Judge Dee Benson ruled against the bill and in favor of freedom of speech. As a result, website owners will not have to rate the content they post.  “In our culture we have these ideas of what’s moral and immoral. We’ll show kids thousands of murders on television and not think twice about it,” Florence says. “But we’re horrified by the naked body and I feel it should be the opposite.”