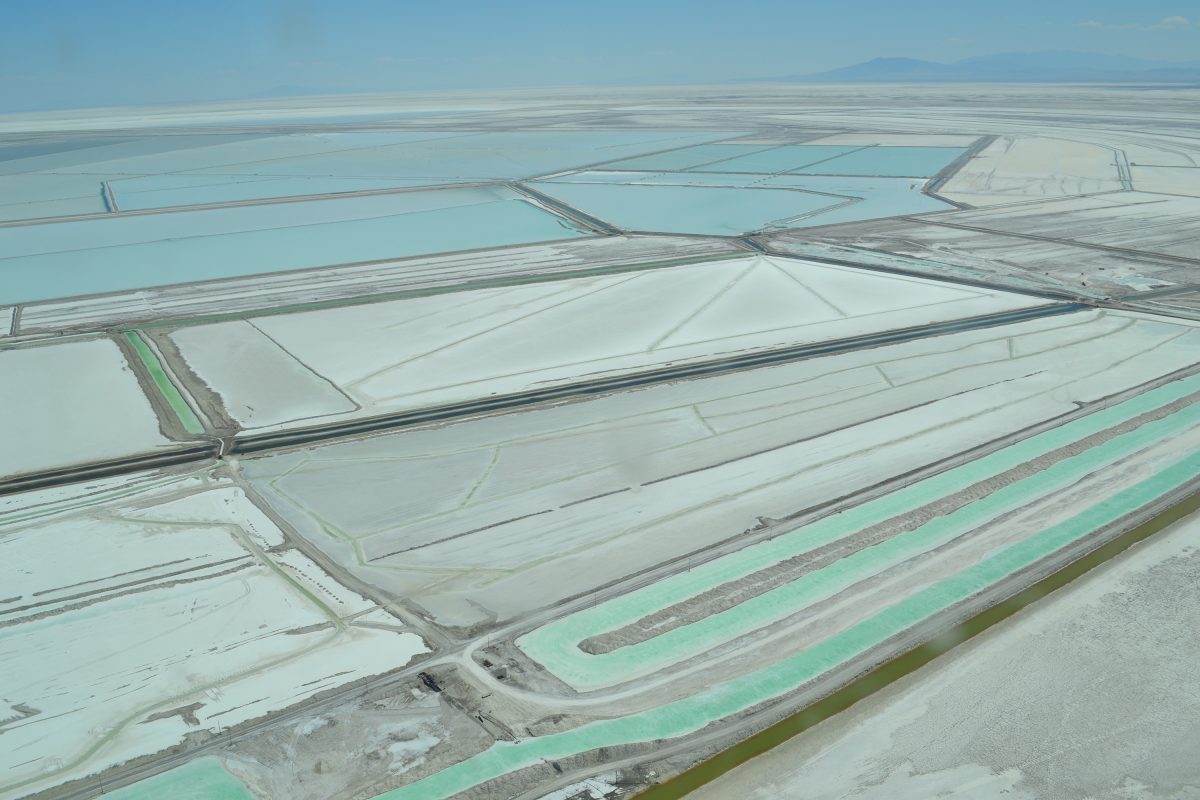 There is an art to science, and science in art; the two are not enemies, but different aspects of the whole.

Collaboration is at the heart of Granary Arts’ current exhibit, Evaporated: Explorations in Art, Science, and Salt. Conceived and executed by visual artist Wendy Wischer and geoscientist Brenda Bowen, the exhibit focuses on Bonneville Salt Flats and unfolds through multimedia layers of art and science. The whole they portray from their unique vantage points is a compelling look at a specific space and the myriad threads that have formed and changed it.

Bonneville Salt Flats is a forty square mile area located west of Great Salt Lake, each a remnant of the Pleistocene Lake Bonneville. Under the jurisdiction of the Bureau of Land Management, it is perhaps best known as the space of speed racing. The flat, thick, hard salt crust was found in the early twentieth century to be an ideal surface to set land speed records, eventually leading to this region’s use in untold number of car commercials. The thickness of the salt crust has been deteriorating for years, though, leading to canceled annual races and increased studies as to why this environment is changing.

Bowen has studied Bonneville Salt Flats since 2013 to better understand these changes, working with the land speed racing community and regional land and industry managers. Wischer began her work at the Salt Flats in 2018, translating place through an artistic lens with her adept focus on the region’s environmental issues. In a joint statement, they describe their partnership: “Our collaboration started with a friendship through the Global Change and Sustainability Center at the University of Utah; [we] quickly realized we shared common interest in environmental change and the role of humans in our ecological environments. In 2016, [we] began to join each other on field excursions, the first one being to the Bonneville Salt Flats to collect dust data from the dust traps Brenda’s team set [which] included an aerial view through a plane flyover.”

The result of their work illustrates the mutually beneficial nature of interdisciplinary studies. Multimedia presentations meld scientific facts and artistic interpretations, divided into thematic areas: “The Bonneville Salt Flats calls to dreamers and innovators, daring them to push the limits of human speed,;” “Environmental measurements reveal the processes driving change,” “Without water, there is no salt;” “Salt and shorelines: the 20,000 year old footprint of Lake Bonneville;” “Life thrives in extreme environments;” “Salt is a necessity of life.” Within each section, visitors are greeted with an array of text, video, artifacts, and art to digest the collaborators’ massive undertaking as they portray the complexity of both the salt flats and their work. 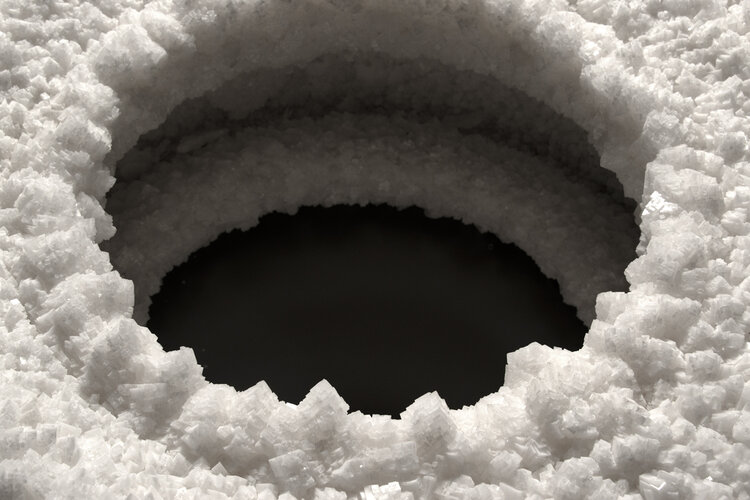 The installations of salt are formally striking, and in one brilliant move, highly interactive. Visitors are provided with earbuds, and when plugged into one pedestal, can hear the sounds that salt crystals emit, belying the belief that the inorganic is dead to us. This is just one example that engages us to consider the environment in a new way, one that is alive through the multitude of its matter. The installation of art and artifacts find their roots in Minimalist art. Mirrors on the floor expand the spaces of both exterior landscapes and the interior gallery. The tire encased in salt is a formalist’s dream: the perfection of the circle is enhanced by the angular shapes of crystalline growth.

The scientific information and data presents a clear and compelling need to understand place through multiple levels of understanding. Graphs and charts present visual data on life cycles (microbial communities) found in this extreme environment. In one wall label, we learn about carbon dioxide and the daily intake the salt crust performs during the day, and the crust’s emission at night: “the salt flats are breathing, but each ‘breath’ lasts an entire day.” In another wall label, we read Bowen and her team created a map of the salt flats’ loss of salt over a fifty year span. QR codes (mounted as wall labels) are linked to real-time cameras positioned at the Bonneville Salt Flats (BFLAT) weather station, where images are taken every five minutes of the crust’s surface correlated to atmospheric phenomena.

Granary Arts executive director Amy Jorgensen recently explained that this exhibit is a departure for the exhibition space: by presenting both art and scientific data, visitors gain a new understanding of how place can be seen, processed, and defined. There is data to be found and it’s worth the time to study what this team presents. Exhibits such as this will become increasingly common: the Anthropocene era we created and inhabit calls for information and action through the lenses of art to mitigate the climate crisis we currently find ourselves in. Executive director of Friends of Great Salt Lake Lynn de Freitas (Bowen is currently on the board of FoGSL) commended each artist “for not just sharing the continuing beauty and enchantment Lake Bonneville provides, but for reminding us about the continuing relevance it has to our 21st-century world in the Great Basin West where temperature, water, and landscape give us the continuing science of discovery not just about our sense of place, but about our future as well.”

The now and the future are about connecting the threads of our environments and their usage to create a more sustainable whole. Be on the watch for an artists’ talk and in the future, a collaborative article that expands on the excellent work Bowen and Wischer are creating.