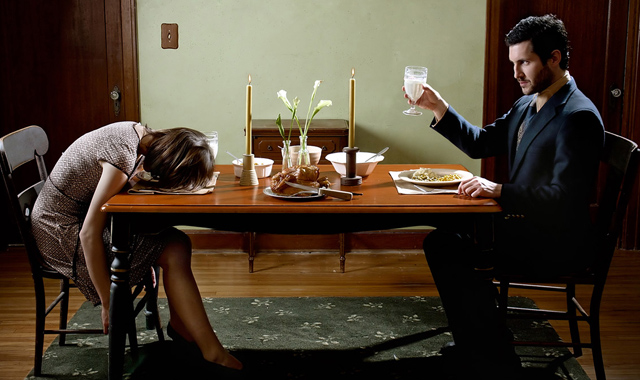 The word cinematic most commonly makes reference to a relationship with, a suggestion of or being suitable for motion pictures. Yet, the diversity of media in CUAC’s most recent exhibition Cinematic makes evident that filmic culture has far reaching effects that spill well beyond its original parameters: it informs and influences photography (of course), like Matt Glass’ haunting depictions of suburban life and Rosi Hayes’ interactive digital footage; but the cinematic also has presence in surprisingly more traditional media like painting, as in the case of Justin Nelson-Carruth, Jeff Larsen, and John Bell, and even drawing, as with UMOCA artist-in-residence Mary Toscano.

In her article, “Idea of Genre in American Cinema,” Nancy Bascombe writes, “Constant exposure to a previous succession of film genres has led the audience to recognize certain formal elements as charged with an accretion of meaning.” These repetitive formal elements not only cue the viewer to quickly recognize a western or film noir device by simply appropriating certain stylized conventions, but also serve to endow a work with a specific heritage. As such, the style is a foil or, perhaps better stated, a clue that what one is about to see is informed by the conventions that have gone before it.

This framing is particularly useful when thinking about Matt Glass’s photographs “Laundry” and “Dinner,” both completed in 2010. For instance, in “Dinner,” a man ironically offers a toast with a champagne glass full of (virtuous) milk, while his female companion is slumped over, seemingly lifeless, in her chair.|1| Did he cause the harm to her? Why is he so seemingly disconnected? So isolated? So unaware? Functioning as a filmic snapshot, the man’s smug pleasure at the moment of horror reads like a stereotypical narrative that makes reference to the absurdly mysterious and disturbingly uncanny David Lynch. That Glass’s “horror film” only exists in a single frame doesn’t negate the narrative, because as Bascombe explains, by referencing genre conventions, meaning is made within the style itself.

Indeed, the cheap suburban 1980s frames that encase Glass’s photographs mirror the genre they reference and continue the idea of the suburban made strange, made scary. In these pieces appropriation is not only limited to film, as Glass’s photographs directly quote Gregory Crewdson, whose significantly large-scale, staged photographs reference both film and suburban terror in similar, if not, grander ways. In fact, referencing Crewdson’s Twilight series, Jeff Dietch calls Crewdson’s suburbia “a bad horror movie about itself.”

But horror film quotations are certainly not what is at stake in Rosi’s Hayes’s “House,” 2012, which is five small screens of digital footage playing in separate windows open on a Mac computer.|2| These moving images can be stopped and started individually by the viewer, allowing the audience to alter the narrative, to stop, to start, to edit, and to become a co-creator in the process. As such, the work feels informed by pop culture main-stays such as American Idol, where the context is rhizomatic and determined by outside forces rather than directorial pronouncements.

While Hayes’s media is a moving picture, pictorially the images read like loose paintings in motion. They aren’t so much about a linear narrative as about the form in general. As such, her work mirrors the well-known words of director Josef von Sternberg who, according to Laura Mulvey, once said, he would “welcome his films being projected upside down so that story and character involvement would not interfere with the spectator’s undiluted appreciation of the screen image.”

Painting seems to be the meta-narrative of the exhibition because it dominates the show in terms of media. In some ways, it’s absurd to use such a traditional medium to index the cinematic because technologically speaking, it’s moving backwards. In fact, in the 19th century, it was the invention of the camera and other more slick modes of documenting life that really started to break down the centrality of narrative painting. And yet, here is narrative painting in the 21st century being used to index film. It’s an interesting and beautiful looking back, looking forward, with the two mediums continuing a long and complicated conversation.

Take Justin Nelson-Carruth’s “Space for Time,” which is a film still vis-a-vis a large-scale painting. Traditionally, large-scale canvases were reserved for only for what was then considered the most important subjects: biblical, mythological or historical.|3|

But Carruth’s painting is inspired by Andrei Tarkovsky’s film Stalker, a film celebrated for its emphasis on cinematography and the pictorial. And yet, the scene isn’t an exact replication of the film. Rather, Carruth took filmic and narrative elements harvested from Stalker and created an environment beyond the film that exists outside of the camera lens. His practice not only pays tribute to the film itself but enacts the practice of stalking by voyeuristically watching the film over and over again, and then reinterpreting what is seen by taking parts and pieces and reordering them.

John Bell’s “JMB” makes reference to the famed neo-expressionist painter Jean-Michel Basquiat. But rather than using historic photographs of the artist as source material, Bell pulled from images of the actor Jeffery Wright, who performed the role of Basquiat in Julian Schnabal’s 1996 film. Such a slip makes manifest the constant fetishization of both art celebrities and Hollywood stars, where cult figure identities exist only in the form of the simulacra.

Jeff Larsen’s mostly black paintings from his series Insomnia function as strange filmic cross cuts.|4| One faintly makes out, posturing in the shadows, fragments of things: of people, feet, a necktie. But these paintings deny the viewer what one really enjoys about film, and that is the ability to look, or what Laura Mulvey describes as the visual pleasure in the narrative cinema. Not only can one not quite make out forms because of the overwhelming blackness but also crafting a narrative is made impossible for the viewer. Thus, Larsen’s paintings seem less cinematic (that is, quoting motion pictures) and more like the film reel of dreams, anxiously flipping through images that are fractured, disconnected and muddled in the subconscious.

But perhaps the strongest cinematic work of the show is Mary Toscano’s “5/16/1981,” a nostalgic (both in material and subject matter) animated drawing. In minimal form, Toscano depicts an isolated and stagnant father sitting in a fixed position, sketched out on cream-colored paper and mounted on the wall. Yet projected onto the drawing via a slide projector is the image of a ghost-like child whose faint figure moves restlessly around picture plane. With each click of the projector, the father’s immobility, distraction and inattention is glaring in relationship to the child; her constant movements are activated by the viewer who advances each new slide, creating each new movement, all of which yields, ever so painfully, no reaction.|5-8|

In an age of special-effects saturation, Toscano’s use of such outdated technology reminds us that what makes a great movie is not always high production but rather what the film mirrors in ourselves.

What in the end, are all of these works saying? Some seem to be invoking film, but by giving it ironic and subversive twists, like Bell, Carruth and Larsen. While others seem to be investigating the power of telling a story and the magic of narrative and how minimally you can do it, as with Toscano and Glass, reminding us, whether in still or moving images, it is great story telling that matters. 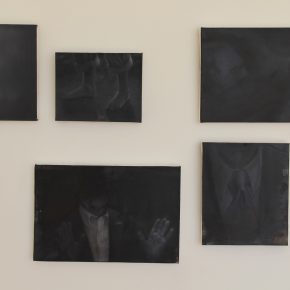 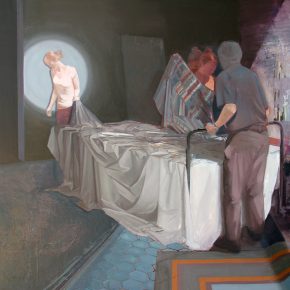 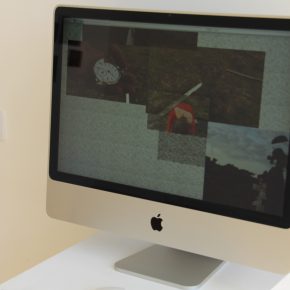 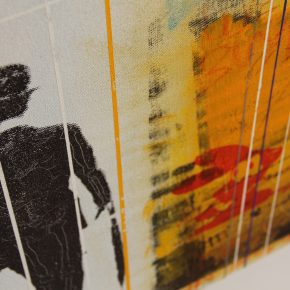 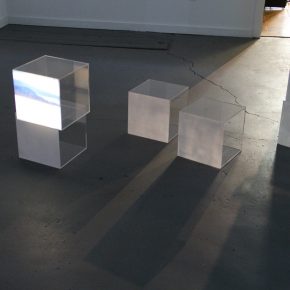 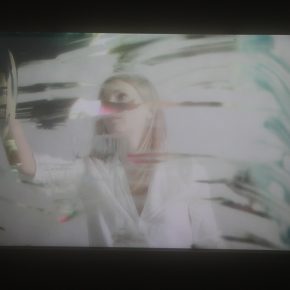 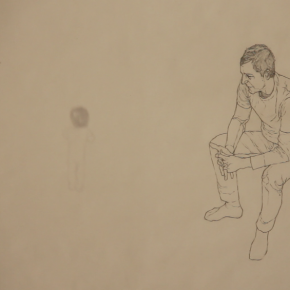 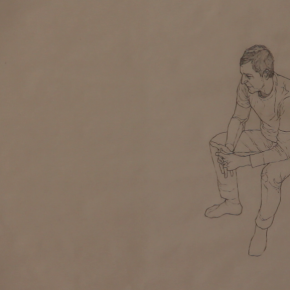 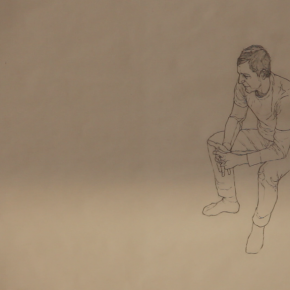 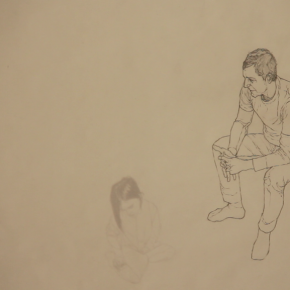 Cinematic, featuring the work of Jeff Larsen, John Bell, Justin Nelson-Carruth, Matt Glass, Mary Toscano and Rosi Hayes is at CUAC through May 4. CUAC is located at 175 E. 200 S. In April and May CUAC will feature a series of film screenings with works by Also Sisters, Jan Andrews and Matt Glass. Visit cuartcenter.org for more details.