What is exceptional about “Global Artists Living Locally,” an exhibit sponsored by the Utah Refugee Coalition now up in the atrium of Salt Lake’s Main Library, is that it does nothing to stigmatize the nature of the refugees it showcases – rather, it casts each artist in the proper light of their culture, with art work that exemplifies their traditions, their heritage, their past and their future.  It celebrates the diversity of the artist living locally and showcases this difference.

Says gallery attendant Alex Morgan, “One of the goals of the URC is to help the community realize how much refugees have to offer.  They have beautiful and powerful stories and they express them through their art.”

We first discussed the work of one of these artists, Emmanuel Makonga, in 2009. A political cartoonist who ran afoul of the authorities he pilloried, Makonga has established himself in Utah, where he continues to create graphic narratives as well as fine art landscapes.  His art feeds off of his home country, the Democratic Republic of Congo, and whether he is politically criticizing it with his famous cartoons or idealizing it with his watercolors, he is a talented artist with a great breadth of vision.

While Makonga looks outward toward the political and communal, Arash Armin’s vision seems more personal. Armin left his native Iran by hiding with smugglers and living for two years in Turkey before coming to the U.S. as a refugee. His “Dream Is Destiny” reveals a dark-haired beauty, a temptress of sorts, whose long hair falls in silky curls. She seems a fantasy. Her body, hair and face are exposed in a provocative manner — horizontally, crossing the picture plane — while a band of black lace covers her eyes. To the artist, surely she represents new frontiers for the women of his country. What a statement is this!  When many Iranian women expose only their eyes, this sultry woman hides her desires behind a ribbon of lace. 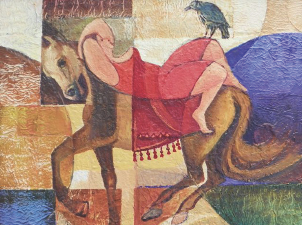 Ali Al Hammashi comes from neighboring Iraq, and he and his family have been in Utah since 2009. A former member of the country’s Ministry of Education, Hammashi is a sophisticated artist whose bold paintings are a blend of detailed realism and cubist abstraction. His paintings can be either acutely abstract, in a way that represents the heat and the angularity of much Middle Eastern dwelling, or refined evocations of the curving sensuality of a horse or female figure.

One of the so-called “Lost Boys” of Sudan, Atem Aleu fled his country at the age of eight. He learned his skills here (specifically BYU) but Africa remains at the heart of his art. His colorful, expressionistic canvases are full of poetry. “Traveled by Foot” has an alien-like quality, or one that is simply incredibly imaginative.  The fuchsia-pink sky is streaked with white.  The land below is mango orange.  At the base of a fractured and fragmented stump of a tree, the viewer’s attention is caught by the shadowy figure of a young boy, barely discernable, in blue with touches of the brush to create recognizable skin.  It is a haunting figure that is eerie when juxtaposed with the surreal landscape.  Who this boy is we have no idea.  What he is doing crouched beneath this stump we cannot say.  How he got there we do not know, and of where he is going we are equally clueless.  Why he is there is the most perplexing and disconcerting question and there is a sense of pathos felt for this waif-like figure of a boy, left to the elements in this wild and strange land.
Global Artists Living Locally is co-sponsored by the Utah Refugee Coalition and Art at the Main, and hosted by Art at the Main in the Atrium of the Salt Lake Main Library, 210 East 400 South. The exhibit runs through November 29.