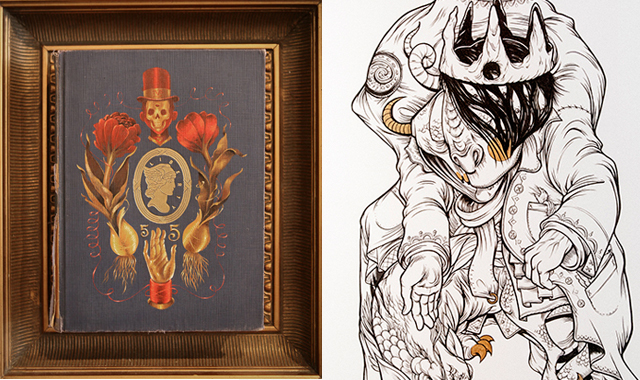 The popularity of religion as a topic in art can easily conceal the true nature of its appeal. Generally speaking, large portions of the human race care about spirituality, but plenty of other things that are equally popular, if not more so, never inspire the outpouring of art that religion has. Where is the great art about money? Why are so many paintings of food sermons against indulgence? If love makes the world go ‘round, why is Mona Lisa alone on her panel, and why is she typical of so many painted beauties?

There are two reasons why religiosity, whatever its importance to humanity in other ways, has made such a great subject for art. On the one hand, its visual surface, whether it’s the opulence of the papal display, the devotional craftsmanship of Temple Square (right down to the doorknobs and hinges), or the humility of a naked holy man standing on his head beside the great River Ganges, makes for compelling visuals. The most explicit erotic image pales quickly beside the power of a crucifixion or the last judgment. And then again, religion is like an iceberg: nine-tenths of what we believe is there is invisible, hidden beneath that surface. Go ahead and compare painted or sculpted objects to ones personally experienced. Go ahead and marvel at the skill, the presence of the reproduced thing. But whatever is given material form by religious art can be seen nowhere else.

If the two devoutly-to-be-wished consummations are magnificent visuals and the ability to render visible wonders that would otherwise be invisible, the holy grail (so to speak) of religious art combines the two in works that bestride the realms of realism and imagination. This month, two very different ways to this goal face each other across the narrow central space of Shilo Jackson’s Kayo Gallery.

Proskuneo
Though born in Oregon and raised in Idaho, David Habben fits comfortably in the Salt Lake community, whether recalling his mission to Australia or explaining the disparate spiritual possibilities layered within his sophisticated graphic designs. Often styling himself ‘Habbenink,’ the artist seems entirely in command of any style of visual representation he likes, from edgy comics to computer-generated logos. His signature stye, though, presents a unified, iconic figure with a bound perimeter. Whether a single individual or a group, the subject’s limbs, garments, and accessories will be arranged so that one heavy line’s visual meaning, its value, whether contour or silhouette, or trading off between the two, will resolve into a border, with all the subject within that border and nothing but open space outside. The result is a compact, solid, even sculptural-feeling portrayal that comes closest to visually representing the way we more-or-less experience our bodies — bound unambiguously by skin, so that there is nothing vague about whether something is part of us or not. Of course it’s only one way of feeling, and not necessarily the most interesting. But it’s a lot harder to capture than the blending of identities that comes so easily to two-dimensional art, and it allows Habbenink to start with an eloquent shape that he then fills in with a figure characterized by emotionally evocative distortions.

According to Habbenink,”Proskuneo” means “to express, by words or bowing down, profound and submissive respect or adoration.” The figures in this show, then, depict deities, but depart from expectations in two ways. Rather than borrow from any specific religious tradition, he began with seven qualities that are among those assigned to different deities by various types of disciples. Then he drew both the deity and the disciple, so there are two figures in each work: one very large and one very small. The postures of the two reveal their relationship in ways that amplify their individual characteristics.

Habbenink’s goal is to correct an imbalance in the way religious leaders usually depict their gods. Instead of proposing they pre-exist their worshippers and leaving it at that, Habbenink factors in the obvious: how a person perceives something is just as much a fact as is what that thing was before it was perceived. Given the importance he places on restoring a balanced perspective, he might have chosen less esoteric examples. ‘Solon’ and ‘Thales’ may be familiar to some viewers (though it’s not clear if the historical Solon or Thales have anything to do with these images), but Periander, Pittacus, and Cleobulus will set heads scratching. This is one of the common flaws of religious art — it often feels like secret code, like messages from one insider to another. Fortunately, one can enjoy the rich aesthetic pleasure provided by a genuinely talented draftsman, finding representational and narrative treasures scattered like Easter eggs throughout, and even take home, if not the entire cosmology Habbenink strives to make visible, at least his point about what we should think when one of us speaks of his god as if that were the only god, the god of us all.

Portrait of an American Fifty-fifth Degree Garment Architect in Full Dress
Where David Habben invents visual conventions and introduces anatomical distortions to add the otherwise invisible, spiritual dimension to his realistic figures, Dan Christofferson takes realism to an uncanny place, making flawlessly accurate reproductions of objects that have no actual correlates in the real world. Those who enjoy the artifacts of esoteric knowledge — badges, costumes, iconic tools, and symbolic weapons reserved for use in clandestine rituals — will find much here to admire, to be tickled by or engaged with. Christofferson draws on the lore of any number of secret societies, as well as the skills of a host of craftsmen and women, in creating this theoretical estate of a highly-honored gentleman, and the echoes in the mind of such degrees of extraordinary status and their unique, strange-yet-familiar forms of recognition will set off a variety of charmed reactions, reflections, and reminiscences in the mind of any viewer.

It begins, of course, with the elevation of a once-universal, now almost extinct craft to the status of mastery, like happened with masons when their skills formed a conceptual bridge between the architecture of buildings and god’s supreme creation of the universe. The tailor may have always seemed an intrinsically more humble individual than the builder of temples and monuments, but that way of thinking ignores the greater intimacy and universal application of his services. Although recently architects, led by the example of Frank Gehry, have begun to truly conceive in three dimension, the ‘garment architect’ long ago faced up to the challenge of fashioning two-dimensional membranes into freely-imagined three-dimensional structures — and of taking a high level of responsibility for the vulnerable ego of the client in the process. Tailors figure in mythology, folk-tales, and vernacular wisdom, so why shouldn’t sewing be as valid a route to enlightenment as any other human craft? One could even give the story a modern twist: why, if most sewing is done by women, is this just another enterprise where the top honors accrue to men?

But in this case the top honors do go to the anonymous and obscure gent whose apotheosis is celebrated here in sublime examples of design and craftsmanship. This ‘Portrait’ required fashioning not only those designs and artifacts, but fashioning the narrative that calls them into being. Like a modern marketer, Christofferson has spun off subsidiary products as well: prints executed in metallic inks suggest the larger audience, their lower status reflected in the mass-produced counterparts to the uniquely valuable gold tools and hand-sewn banners presented to the Master, who would have counted themselves privileged just to share the banquet hall where He was honored.

If there is art in Portrait of an American Fifty-fifth Degree Garment Architect in Full Dress, it doesn’t lie so much in the objects displayed, which in any event were, like the works of Andy Warhol, fabricated by others under the artist’s supervision. Like an installation — like an assemblage that required completely transforming the found objects and, even more, the found concepts and gestures-of-homage that comprise its raw material — this portrait is as much an idea as a collection of things. What it delivers, in the gallery and on later reflection, is the closest the artist can come to the light bulb appearing over the head of the creative thinker — the ah-ha! moment when a whole lot of disconnected stars in the firmament of ones mind suddenly form a constellation. After this, there can be no going back.

Certain specific impulses in the mind are like the appetites that lead us to choose to eat food instead of things useless to our bodies. Meant to keep us safe, if fooled they can just as easily lead us into danger. Habbenink and Christofferson allow viewers to witness some of the power, some of the dangers, and most importantly the ubiquitous and protean character of the religious impulse. Reflecting on recent world history, their messages could hardly be more timely. Habbenink quotes Anne Lamott, who saw the dilemma coming years ago, and wrote: ‘You can safely assume you’ve created God in your own image when it turns out God hates all the same people you do.’ The search for certainty in a necessarily uncertain, threatening world is itself a threat. Yet the same impulses, harnessed by self-awareness, can be as engaging, as entertaining, and as enlightening as this, as a visit to Kayo will readily show. 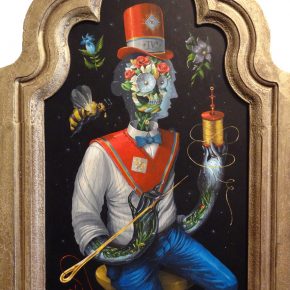 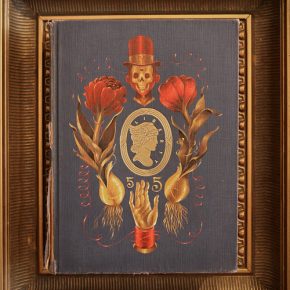 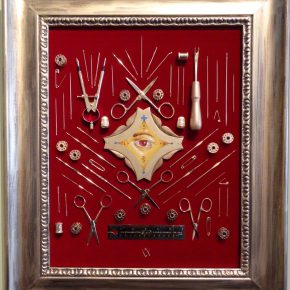 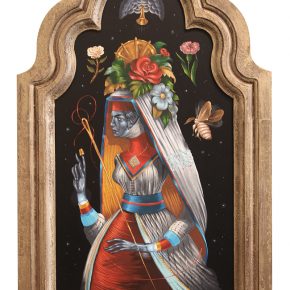 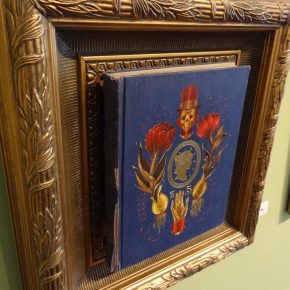 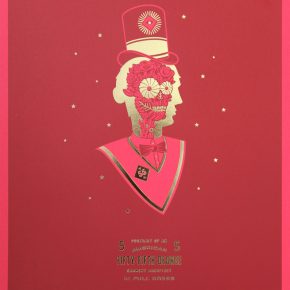 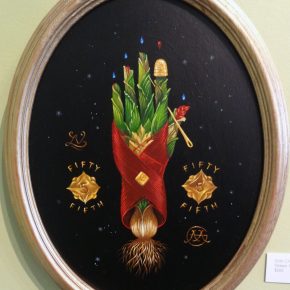 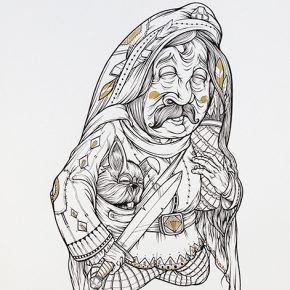 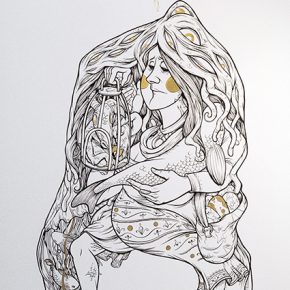 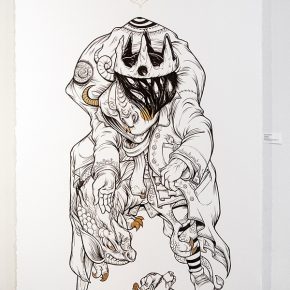 Proskuneo, featuring new works by David Habben, and Portrait of an American Fifty-fifth Degree Garment Architect in Full Dress, new works by Dan Christofferson is at Salt Lake’s Kayo Gallery through May 10th.