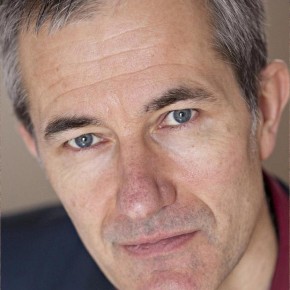 On January 14, British author Geoff Dyer went public with the story of his obsession for vacationing in Utah. He did so in the Financial Times, a London newspaper read by people who live in the world’s most expensive city, where they probably pay more for their daily accommodations than we pay for our vacations. His generosity is of the most useful sort: no matter how dubious one may feel about filling up our vast scenic spaces with the homes of immigrants, the money spent by tourists is the one universally accepted argument for preserving the vistas they come to see. But who is Geoff Dyer, and why should we care what an Englishman is telling his countrymen about us?

To call Dyer an “author” is to take the easy way out. Like many of today’s writers, his techniques vary, rather like a painter who also makes videos or a lawyer who grows gourmet potatoes for local restaurants. He has written four novels, including last year’s Jeff in Venice, Death in Varanasi, part of which is set at the Venice Biennale, but his other books are harder to categorize.Booksellers generally put a book in whatever section of their stock the publisher dictates, but even Dyer’s publishers aren’t sure what to call some of his work. Imagine, on the basis of their titles, trying to decide what kind of book is called The Color of Memory, But Beautiful, or Out of Sheer Rage. A man comes into a bookstore and asks for “your non-fiction section.” The young lady at the counter points to a few paltry shelves. “Those,” she says, “are novels. Everything else,” she continues, waving at the vast shelves and tables piled high with tomes of every size and color, “are non-fiction.” Can you call a book about a religion you consider a joke “non-fiction.” And what about jokes, which strictly speaking are never true: fiction or non–? When we have the answers, we might be ready to tackle Dyer’s most memorable title: Yoga For People Who Can’t Be Bothered To Do It.

Some Utahans will be offended by the assertions Dyer starts from. He begins five years ago, at the point when he and his wife were on the verge of giving up the splendor of what had become their favorite destination: Utah landscapes. Magnificent days, yes, but not magnificent enough to compensate for evenings spent in dreary motels, eating food prepared for, and often by, folks for whom it’s still considered little more than fuel. But that’s not a criticism of how residents live. It’s not an accusation: it’s an honest admission that many places lack any alternative—something for someone who wants to eat a meal that complements appetite the way sunset at Delicate Arch complements vision.

The Financial Time piece tells the story of how they solved this dilemma. Dyer offers plenty of proof that he isn’t just spinning off advertising copy. Phrases like “sheer scale,” “a new topographical category of the sublime,” and “terrain that, until recently, basked in the confident belief it would only ever be traversed by foot or paw” lead to encounters with Secret Canyon and Arches. At one point he promises two hikes and, in case that sounds inadequate, reminds us that nothing here is so feckless as to happen the same way twice:

Two doesn’t sound like much but bear in mind the way that the changing light and weather mean that the colours are all the time flaring up, fading, glowing and shifting, and it’s unlikely you could ever be sated or bored. Everyone wants to see the Northern Lights but the western lights are hard to beat. I don’t think I’ve ever seen so many colours as on the Hoodoo Trail, at sunrise and sunset. There was sky in every direction and every way you looked it was doing something different: pink and pretty one way, pandemonium in another, a dark slab of cloud overhead, and a blue haze everywhere else. Incredibly, the moon – last seen the night before in the east – was only now coming to the end of its shift, emerging from a bank of clouds, sinking like a silver sun in the west while the real sun was clearing the mountains in the east.

There is more to Utah than the Redrock Country, and there is more to Geoff Dyer than travel writing. We’ll hopefully be taking a closer look at this Utah enthusiast in the future. For now, those whose feelings for the land we call ours do not include a reflexive rejection of the opinions of an admitted outsider can check out the rest of what he has to say here.

More Dyer:
Otherwise Known as the Human Condition, Geoff Dyer’s newest collection of essays and reviews – mostly on literature – will be published on March 29 by Graywolf Press.

The visual art-minded might check out Dyer’s 2005 The Ongoing Moment, Dyer’s unique look at the history of photography published by Pantheon, or his 2010 collection of cultural essays Working the Room.