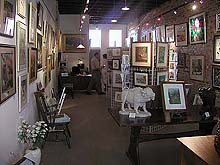 Ogden’s Gallery 25 is both an attempt to help revitalize a town as well as an opportunity for artists who have known and work together for many years to also be able to show and sell together. It was started in August of 2002.

Dubbed “A Northern Utah Artists Cooperative, ” Gallery 25 was begun in August of 2002. Located on the north side of Ogden’s historic 25th street, the gallery came about as part of the general revitalization of the many old buildings that line the street. When a local merchant purchased the building in which the gallery is located to open a frame shop, he realized that he would not need the complete space. To share the space with a gallery seemed a natural fit. Nancy Clark and Joe D’Agnillo, two of the Co-ops artists, got together and found seven other friends to create Gallery 25.

The frame shop has recently closed and a new owner has taken over the building, but the area remains an “Art spot” for the town. It is surrounded by a number of antique stores, cafes, and soon an art supply store will be going in across the street. 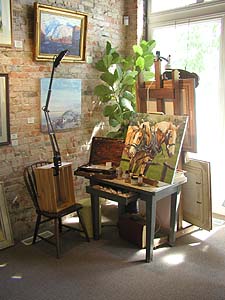 When we stopped in to see the gallery, we met Mac Stevenson, one of the nine artists, all of which share time to man the store. He is happy about what is going on along 25th Street and his experience with the gallery. “25th street is the upcoming part of town. Everything else seems to be declining,” he says.

The artists have found that a lot of their business has actually been from tourism, people coming to town and staying at the hotels for conventions and other activities. “There’s a few local people [who patronize us],” Stevenson say, “though the majority of them, especially in the summer months — when things begin to pick up — are people that come from out of town.” He points out that Ogden is mostly a middle class town and so lacks the type of money that would normally be necessary to sustain a lively visual arts experience.

The cooperative group that makes up Gallery 25 consists of artists living from Kaysville to North Ogden, working in a variety of media, including oil, watercolor, lithograph and pencil. Most of them are more mature artists, having known each other before from such associations as Ogden’s Palette Club. 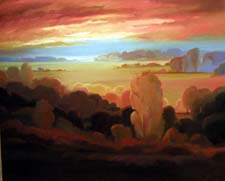 Stevenson himself has found the venture profitable and he believes everyone else has as well. Each co-op member pays a small fee to be part of the gallery, to cover rent and other expenses. A small portion of the selling price of the work goes back to the gallery, to develop it, and any profit at the end of the year will be going back to the artists. When they formed in August of 2002, the artists agreed to try the experiment for a year, but Stevenson doesn’anticipate anyone leaving at the end of the summer.

In the meantime, all nine artists hang their work on the main floor gallery. The gallery also features a lower area that allows customers to view additional works and gives many of the artists much needed storage. The gallery always has pieces hanging from each artist. Once a quarter the front of the gallery will feature a thematic show from the nine artists — last month’s featured scenes from Ogden and this month the theme is animals.