By Listings on May 3, 2005 • ( Leave a comment )
Exhibition Spotlight: Salt Lake City
From a Printmaker’s Perspective 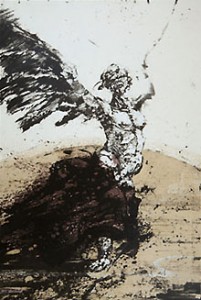 I love being a printmaker and being surrounded by other printmakers for two reasons. First, printers are fine art craftsmen who for several hundred years have taken advantage of (glommed onto) every new technical dohinky from Guttenberg’s press to cameras and computers. With each modern invention, printers have advanced both technically and contextually the complexity of their images. Of course being easily distracted by each new shiny tool kept us grounded in a craft profession which often brought labels from others that printmaking was a “lesser” art form. But ever since Albrecht Durer, printmakers have continued to challenge that perspective with more than enough technical skill and talent.

Secondly, printmakers make multiples. And the best thing about multiples is that you can share them with more than one other person at a time. (We are not talking about so called “Limited Editions” where the original art is commercially reproduced to create 10,000 images. — Hands on! A printmaker is intimately involved in each and every pass of the print through the press. It’s my hands that cut and etch each matrix, mix and roll the inks, and tear each sheet of paper.) With multiples, printmakers can swap prints on a regular basis. We call this swap a print portfolio or print exchange. A central theme is proposed and each printmaker responds to the issue presented. Now, we’ve got a dialogue. Several views and subtle layers to each issue reveal themselves in this visual exchange of images.

I invite you to Saltgrass Printmakers for an exhibit of prints by Justin Diggle and Steve Lockett, “Two Printmakers, Two Perspectives” along with our first ever open print exchange, “When Cultures Collide” on display now through June 10th. Diggle, a printmaking professor at the University of Utah, introduces a sense of the surreal and theatrical by combining absurd objects in unique screen prints. Lockett, a graduate student at the University of Utah and a printmaking instructor, works primarily in monotypes and lithographs. Melded in classical architecture and mythical forms, Lockett’s figures portray passions, desires and pain in a struggle to take flight.

Drop by Saltgrass Printmakers and surround yourself in the fine art prints and visual dialogues that printmakers are uniquely capable of presenting.