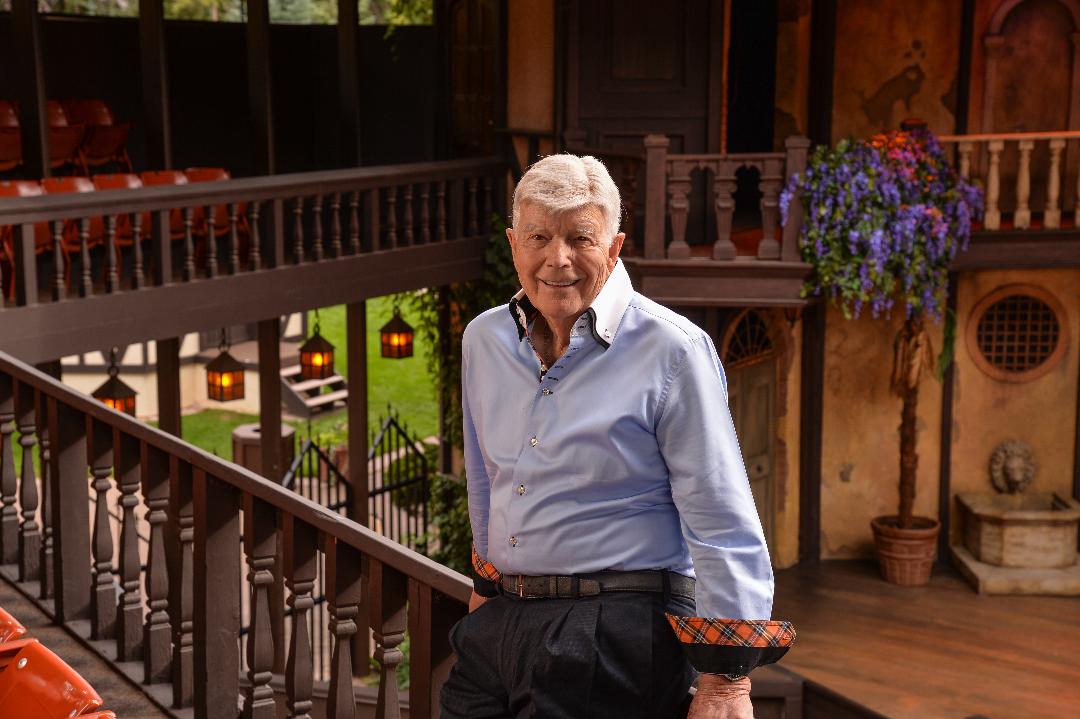 Friends hoped Fred Adams would go on forever. Not in order to keep having grandiose ideas like that of founding a world-class Shakespearean festival in the middle of the Utah desert (and then bringing that dream to fruition in a big, Tony- and Emmy-award-winning way), but just to kick back and enjoy the fruits of his endeavors while they enjoyed his most-enjoyable company. But Adams wasn’t a kick-back kind of guy. And, his work done, he died early Thursday morning, Feb. 6, 2020, in the Cedar City Hospital at the age of 89.

“The state’s most prominent arts leader, Adams made a deep and lasting impact on everyone he met, and it is with a heavy heart that we say goodbye to our leader and friend,” the Utah Shakespeare Festival wrote in a press release.

His oldest and best friend, Cedar City Councilman R. Scott Phillips, was at his side in the hospital as he had been so often during the past 48 years. Phillips was Executive Director of the Utah Shakespeare Festival for a decade, only stepping down in 2016 to run for council office. He recalls that Adams was a reader of just about anything, but particularly loved English history: “Tudor history, anything relative to the time of Shakespeare. Anytime we would travel, he had a book he was sharing.” He read mysteries, too. “And political novels,” his friend recalls. “Tom Clancy. He also read “Time” magazine “and PEOPLE magazine for the scandal and drama,” says Phillips with a short laugh.

“He traveled because he just liked the adventure. He was truly a family man. He would be as comfortable on the stage at Carnegie as in the kitchen talking to his grandchildren. He loved travel because he found it educational: “Isn’t it remarkable that civilizations existed for millenniums before we ever did and that we have this to remember that?” Fred would say. “What we have to remember them is their art, architecture, and their literature. Not who was their mayor nor what political ordinances they passed.” These are observations Phillips clearly cherishes.

Born in Cedar City on Jan. 30, 1931, Adams moved to Delta as a child and graduated from Delta High School. He was in the U.S. Army from 1952-54 and then served an LDS mission to Finland from 1955-57. He holds bachelor’s and master’s degrees from Brigham Young University in theater arts and Russian and did pre-doctoral work at Catholic University in Washington, D.C., and the University of Utah. After two years of teaching theater at the College of Southern Utah (now Southern Utah University), Adams founded his Shakespearean organization in 1961 with then-girlfriend and soon-to-be-wife, the late Barbara Gaddie Adams (she died in 2008).

He wanted something similar to what Ashland, Ore., had in its Shakespeare Festival for his native Cedar City — so he first went to Oregon to check out their program; on his return, he got the local Lions Club to donate a thousand dollars and with students and others around town building sets and sewing costumes, the 1962 festival was up and selling tickets, entirely under his direction: “Hamlet,” “The Merchant of Venice,” and “The Taming of the Shrew” onstage with Barbara running the ever-popular Green Show that continues to entertain visitors before performances to this day. The annual budget is now more than $8 million (up from that initial donated $1,000) and boasts about a hundred thousand visitors.

Barbara and Fred Adams were a great team, Phillips believes, because she was funny and clever, but comfortable allowing him to be out front “while she was a lot of the genius behind him. She didn’t need the limelight and they were the perfect match in part because of that.”

“Fred was an amazing storyteller,” says Anne Cullimore Decker, who acted with the company and was a friend of Adams. “AMAZING. He was so good at it that frequently his imagination carried him beyond the historical facts. Because it was Fred Adams who said it, it had to be true! I think everyone, including scholars, forgave him for his embellishments. They captivated his audiences and they certainly did no harm to any living individuals. His preshow informative entertainment made everyone all the more eager to see and appreciate the shows,” says the Salt Lake City-based actor.

Another trait that she recalls: “There was no job too low for Fred. When I was in the company, I’d frequently see him with Scott [Phillips] riding on a cart either hanging or watering the beautiful flower baskets which adorned the area. It was a high and precarious reach to achieve either job. When I questioned him, he said, ‘Who else is going to take on this job?’ but you could see he also found a pleasure in it. I don’t think there was any job at the Festival that Fred hadn’t taken on at one time or another in his long career. We shall miss him terribly,” she adds.

One thing that has always been a puzzle for this writer is the why of it. Adams told a reporter on an undated video that he thought the people of Cedar City would respond to Shakespeare because of genealogy: their Welsh, Irish, and Scottish backgrounds. “Those early settlers loved Shakespeare,” he said.

More importantly, the county had just closed the iron mines west of town because, “Japanese steel was so cheap … That devastated this little community,” Adams recalled. “The miners, 700 of them, had to pick up their little families and move out. I presented to them a potential economic factor to bring people off the highway (there wasn’t a freeway then), spend a night or two and help the economy. So that was the genesis behind doing this. That’s how it started,” Adams said.

“Years and years ago, in the very early days,” says Phillips, “he told a service organization made up of bankers and others that ‘we can get more people if you have a good season.’ Fred was trying to pick up a few dollars in donations. The bankers didn’t seem to get it, but an upholstery guy in attendance said, ‘Do you mean if more people buy hamburgers, then the upholstery wears out faster and I get to replace it sooner?’ He got the fact that the trickledown effect could help not just the bankers but everybody,” Phillips explains.

And that’s the way the Utah Shakespeare Festival ultimately worked to help Cedar City. That was Fred Adams’ big picture, the why of it.

Later in life, Phillips tells us, Adams adopted two little Yorkies that were his constant companions: Maximus Minimus and Cinderella. (Max and Ella were at their standing two-week grooming appointment as we spoke on the phone.) “They are having a rough time now,” he observed.

One thing Phillips noticed is that as Fred Adams got older, he wanted the world to be kinder: the word “Civility” was stamped on a pin he wore nearly every day. “He sought a way to engage in conversation where one could maintain dignity. The man who fought so hard to create this mecca in this southwestern desert had learned there was a way to do things with civility. ‘What would Fred do?’ is what I ask on the city council as I sit there,” Phillips muses.

He reminds us of a few important things:

The Chesapeake Shakespeare Company in Baltimore had a moment of silence for Adams the other night, “and that is just one example. The director said, ‘His influence is widespread and will be felt across the country.’”

“Fred taught for 38 years. He has students spread across this country. At Disney, in the motion picture industry, in Los Angeles, Dallas, New York. He was an influential teacher and didn’t know how many lives he had touched,” Phillips says. “We are just now getting some idea.”

While serving on the Utah Arts Council, Adams was asked to speak to the Legislature for support for the arts in the state. He decided to do something different. There were 40 people in the room and Fred passed out 40 crisp dollar bills. “Look at that dollar: an artist designed that bill, an artist engraved it, an artist colored it. You need to invest in those artists.” They got their funding.

And on that undated video, Adams observes:

“I have full confidence that the festival will continue. I’m not going to be around to watch it, but I think it‘s in good hands, and I think it will get better.”

Fred Adams is survived by a brother, four children, 14 grandchildren, and a great-grandchild.