Frank McEntire’s “And No Birds Sing” is an Unflinching Reckoning 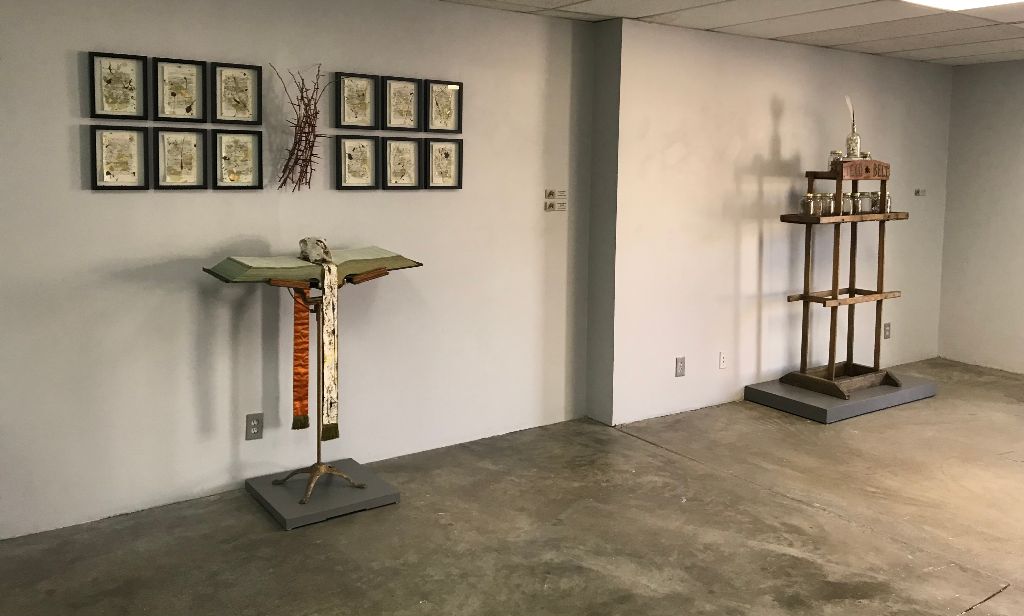 Installation view of “And No Birds Sing” at Nox Contemporary, including “Slaughterhouse Ledger” (left) and “Loss of Habitat” (right)

A small animal’s skeleton is visible from inside a domed sphere at the center of an elaborate golden frame. The adornment evokes the gilded macabre of a medieval Christian reliquary. Throughout And No Birds Sing at Nox Contemporary, one sees Frank McEntire’s love of interesting and unusual found objects, conjuring the Dadaist penchant for reappropriating the mundane into the remarkable. In aggregate, McEntire’s works are also reminiscent of the early modern “cabinet of curiosities,” assortments of scientific and cultural artifacts meant to showcase the collector’s knowledge and often worldly status. Yet McEntire is not an elite “collector” in the early Renaissance sense. Far from displaying his collection as tokens of far away travels, or as a boasting of scientific specimens, he crafts pairings that jolt us into an awakening of sorts — awakenings that invite us to contemplate the indelible mark of humankind on the rich landscape that has nourished us for all of time.

These “studio offerings” as the artist calls them, are items discovered in his travels within his beloved Utah deserts, as well as those brought to him by friends. So McEntire, with his voluminous collection of found and gifted offerings, is as much curator as he is creator.

This exhibition is connected to a larger installation, Silent Spring and the Anthropocene, which debuted at Brigham Young University in 2019. (The artist will craft a distinct iteration of both exhibitions at Snow College in September 2022.) McEntire says that with Silent Spring and the Anthropocene he is “happy to be able to bring everything together and address my concerns about the world we live in. Humankind, since the 18th century, has been making an imprint on the earth in a notable fashion, and not in a good way.”  The exhibit weaves together distinct threads within McEntire’s body of work — themes of war and peace and the environment — to showcase an impassioned concern for the world in which we live. “We are planetary stewards,” he says. “As artists, it’s our responsibility to use the tools given to us to create an entry point for people that have an affinity for the environment, to elicit a feeling of responsibility.” 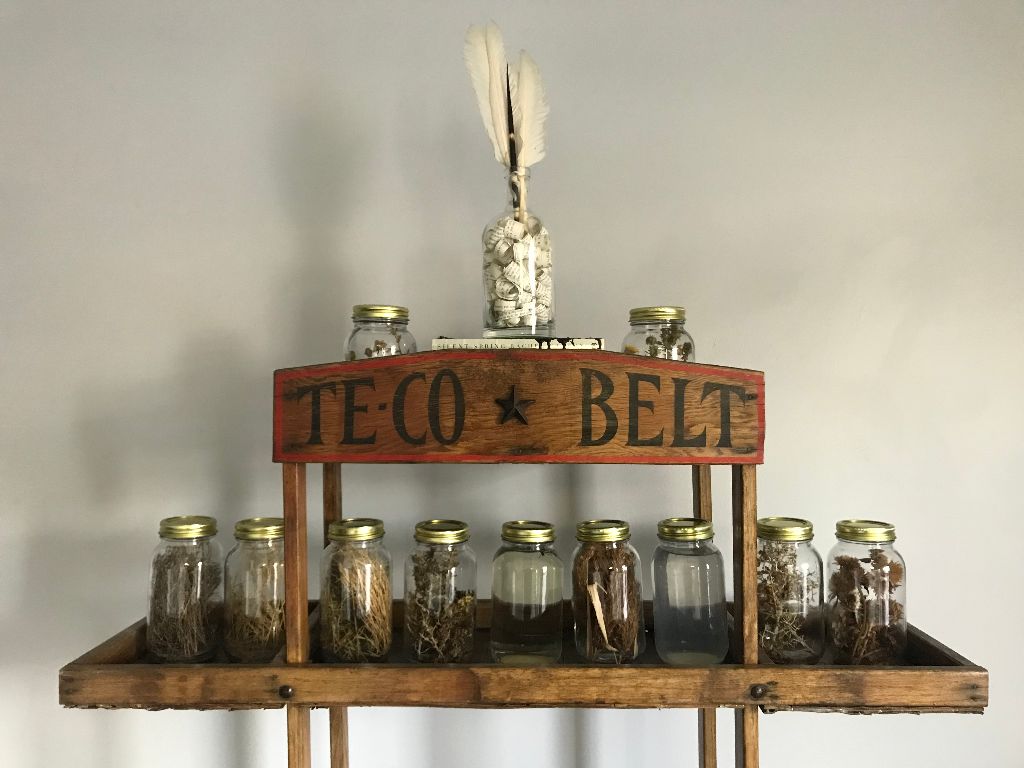 As one enters the gallery space, three large works compete for our attention. The first, “Loss of Habitat,” is a collection of specimens gathered from the Great Salt Lake marshlands. These specimens show but a few of the various types of vegetation near the Lake, the diverse habitat of which is quickly being threatened by corporate enterprise, including Utah’s wildly controversial inland port.

“Slaughterhouse Ledger,” as the title suggests, is an actual bound book replete with slaughterhouse livestock entries. McEntire discovered this extremely weighty item in a novelty shop in Idaho, a strange and tangible remnant of the scale of America’s meat trade. McEntire displays the ledger opened halfway with an animal skull placed at its center, forcing the confrontation of death laden on each page of the enormous book. Apart from any moral arguments one may have regarding the wholesale destruction of animal life due to contemporary factory farming, the environmental impact of such practices is also alarming — with soaring greenhouse gas emissions and water consumption among the factors contributing to climate change. 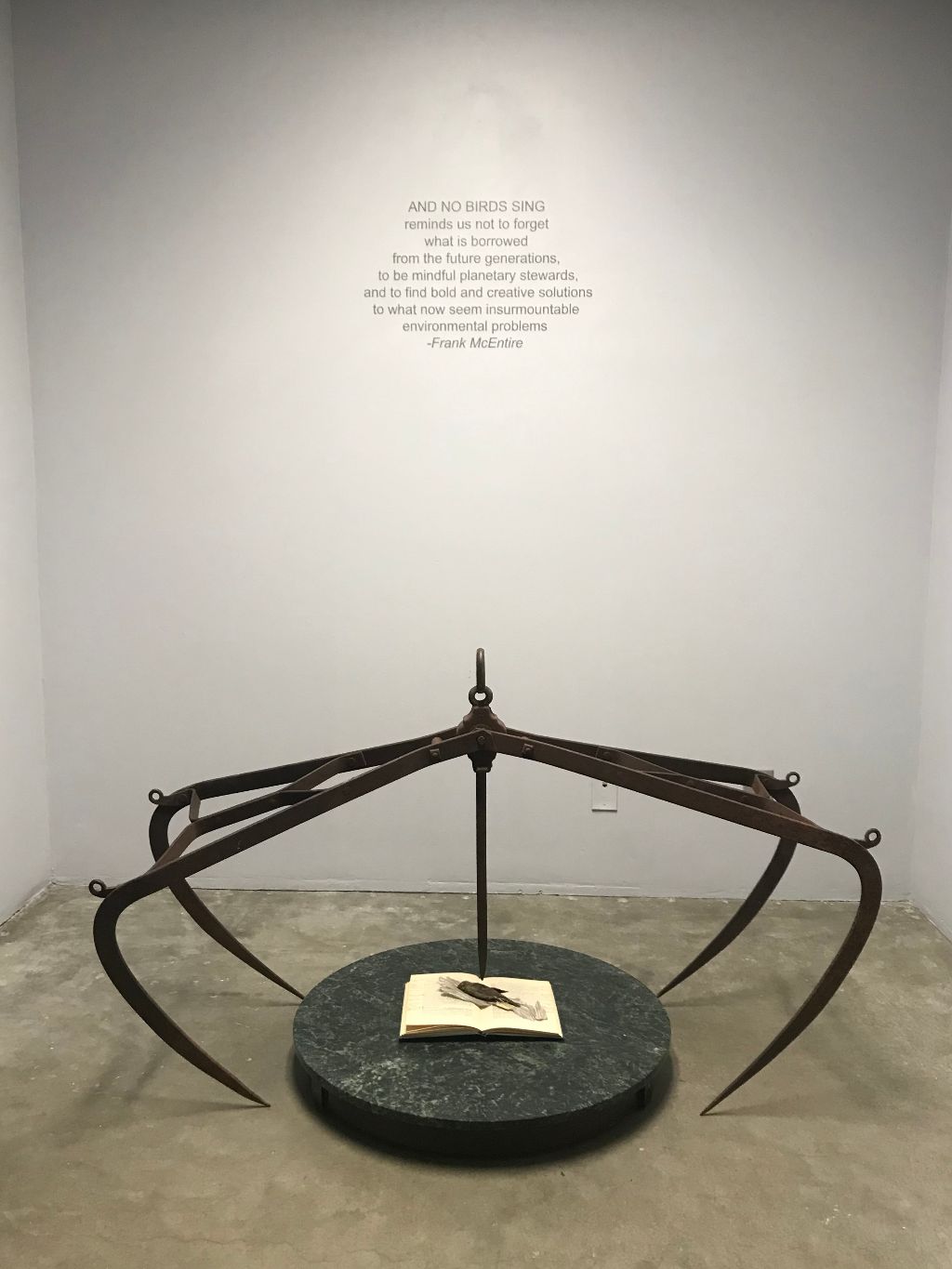 Frank McEntire, “And No Birds Sing: Their Return Not to be Taken for Granted”

“And No Birds Sing: Their Return Not to be Taken for Granted” is a round granite slab housing an open book with feathers on top. Encircling the slab is the spider-like mechanical arm of a rusted farm tool. “This piece deals with the impact of agriculture on the land. An enormous amount of our land mass is dedicated to feeding and cultivating livestock,” McEntire says. Not to mention that domesticated animals like cats kill millions of birds each year. This work highlights, in startling juxtaposition, the forces that contribute to our already fragile ecosystem, evidenced by interplay between the soft bird feather beneath the foreboding shape of the farm equipment.

In another small room in the gallery, lies an assortment of curiosities. Among them are: a dated can of insect repellant, a bird’s nest, red and white gravel collected near the Great Salt Lake, a rusted oil can, and a dainty wooden chair with Utah’s signature beehive carved within. 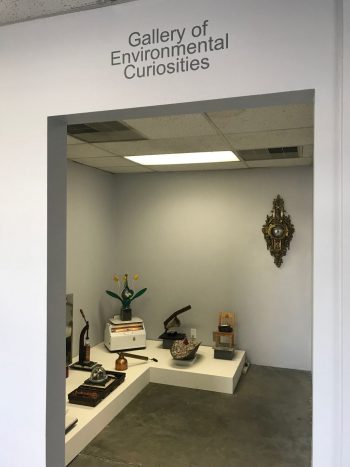 While art often illuminates the beautiful and divine, at its best it cajoles us from our complacency by forcing us to reckon with that which we may be apt to ignore. For McEntire this includes our mortality— or better yet our Earth’s possible demise and the role we’ve played as catalyst. As a staple of Utah’s art scene for several years, McEntire is never one to shy away from difficult subjects — for years he has constructed elaborate iterations of his moving Spontaneous Memorial to the victims of the September 11, 2001 terrorist attacks. He forces one to ponder and dissect rather than stroll breezily with wine and cheese in hand at your Friday evening gallery stroll.

Scientists have defined the “Anthropocene” in McEntire’s exhibition title as a new geological era in Earth’s long history, marked by the distinct impact of human intervention in the natural world. And the reality of human intervention is startling — foretold in Utah’s devastating drought, as well as global fluctuations in temperature and water levels. Astonishingly, the incontrovertible reality of climate change has become politicized, with critics aiming to distract from the startling evidence in front of our very eyes.

The exhibtion title also refers to and honors Rachel Carson’s 1962 book Silent Spring, an environmental landmark credited with the formation of the Environmental Protection Agency, as a particular source of inspiration. In Silent Spring, Carson elegantly states, “in nature nothing exists alone.” Indeed, just as each one of us makes our indelible mark on those we love, so too do we leave traces of our existence on this planet. McEntire’s work invites us to see the interconnectedness of our actions, the human interventions of past and present that coalesce into a rippling of sorts, at once injurious to the land that gives us life, but yes often beautiful as well.

And No Birds Sing (Silent Spring and the Anthropocene), Nox Contemporary, Salt Lake City, through Jan. 28, 2022.