You’ve been hearing “hit it out of the ballpark” a lot lately in the political arena so I hesitate to apply the phrase to an art show, but Frank McEntire really has done it with The God Particle at David Ericson Fine Art. It’s a gem of an exhibit in a jewel box of a setting and, even if you’ve seen Frank’s work before, you shouldn’t miss this. An old Victorian parlor proves, oddly, to be the perfect place to showcase his recent quirky and contemporary assemblage pieces orchestrated to a new and newsy scientific theme. It really took my breath away and I confess to being a friend who has seen and admired Frank’s work over a lot of years. This show is stellar. 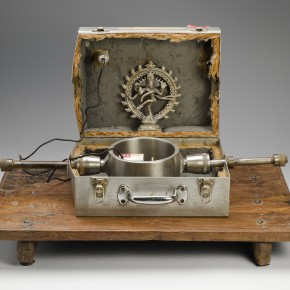 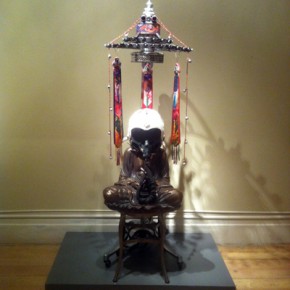 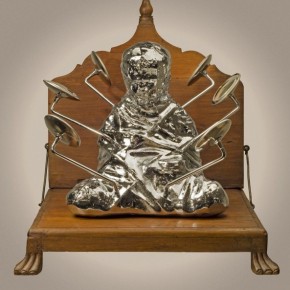 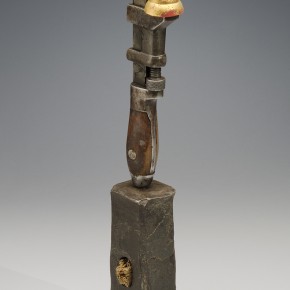 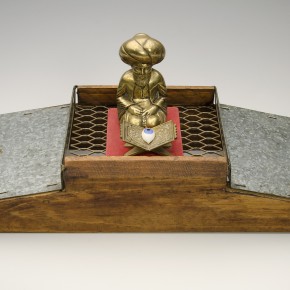 Memorial Prayer for the Sikh Six

Inspired by physics work in a lab near Geneva where scientists say they have discovered the particle that gives matter mass and holds the universe together and, coincidentally, acquisition of old lab equipment from a high school and an engineering department, McEntire set out to reconfigure what he “scavenges from small bits of [the] detritus” of science and theology.  Each piece relates closely to the god particle theme with a remarkable grace, with the exception of the poised fighter pilot Buddha, seated on a Tibetanesque dais made from a vintage electric hair-curling machine. More clunky than graceful, it’s a lot of fun.

The centerpiece, for me, is “The Six Perfections,” a simple seated Buddha form with six mirrors angled out from the body reflecting the silvered surface.  There’s “Monkey Wrench II,” a mixed-media miniature of his gold-leaf covered beehive installation outside Abravanal Hall (see page 2 of the September edition). An alcove holds several important small pieces including “Memorial Prayer for the Sikh Six,” a brass turbaned holy man contemplating a blue-and-white glass all-seeing God’s eye.