On April 20, Nox Contemporary opens an exhibition of new works by Frank McEntire, one of the 15 artists selected in 2013 as “Utah’s most influential artists.” McEntire certainly has not been resting on his laurels since receiving that honor, have exhibited in a number of locations in Utah since then, and recently having moved into a larger studio to accommodate his growing collection of assemblage works. This profile appeared in the 2014 publication Utah’s 15: The State’s Most Influential Artists.Artists of Utah recently announced the beginning of Round 2 of Utah’s 15, their project to celebrate Utah’s most influential artists (click here  to learn about Round 2 of Utah’s 15.). 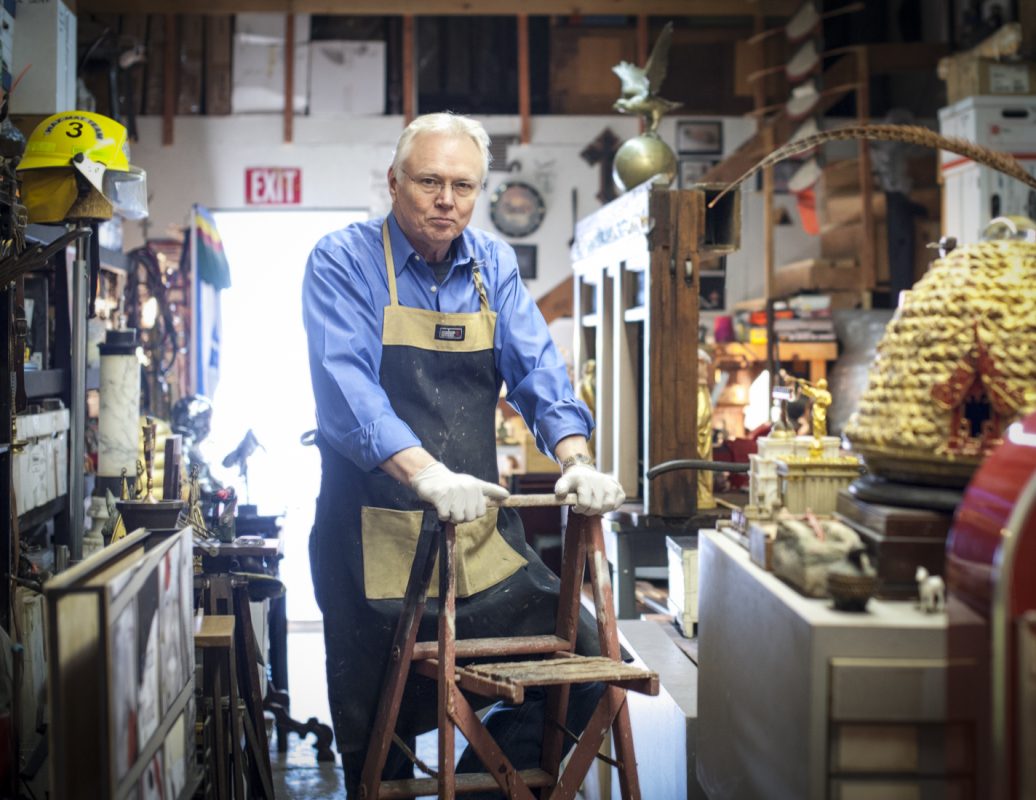 To say 2013 was a busy year for Frank McEntire would not exactly be accurate. Yes, his list of accomplishments this past year is long; the ways he created and presented his art expansive. He received several high-profile public awards. It would be easy to list McEntire’s numerous projects to impart a sense of this artist’s importance and reach, yet that would miss the point of what he continually strives to achieve and communicate. Through his interconnected roles as sculptor, curator, researcher, writer, and community leader, McEntire continually evolves through a life rich with creativity and active engagement. So 2013 may have been a busy year, but it fell into the continuum of past and future wherein one thing leads to the next.

The gamut of McEntire’s life includes the intersection of work and art, creation and contemplation. He is known in the regional art community as a former director of the Utah Arts Council (now the Utah Division of Arts & Museums), curator of numerous exhibitions for many of Utah’s museums, and author of many articles. He has been employed outside the arts community for most of the past 35 years in the nonprofit sector, most recently as a strategic planner for funding education and humanitarian causes.

His work within the not-for-profit sphere, whether in his employment or as a volunteer on boards of directors, has been to facilitate and organizationally assist people, fulfilling the role of problem-solver in his service to community. That process – be it with people or with art – has been a creative process where the lines between work and art run thin, as the end result is the same.

If the line between facets of life blur into each other for McEntire, it is due in no small part to his philosophy that the world is enriched by looking outwards; it is to be engaged on multiple levels with family and friends. Life is an assemblage – a gathering of disparate parts – that becomes harmonized through this engagement. McEntire’s art mirrors his life, his ability to use the process of assemblage to create a coherent, whole image that resonates with others beyond himself. His continued success stems from this ability to interconnect and engage.

“Frank McEntire’s iconic and iconographic sculpture reminds us to look at ourselves, particularly in the capital of a world religion, with some deeper sense of reverence and with an added grain of salt,” says longtime arts writer Ann Poore, who nominated him for the Utah’s 15 Award. “His explorations of Eastern and Western belief systems are compelling and often witty, utilizing found objects in unique ways to make us contemplate and ponder many aspects of spirituality. His powerful installation on 9/11, which changed and evolved each year until a decade after the tragedy, was a public service to us all.”

The continuation of his artistic practice within growing community-wide recognition of his outstanding leadership in the arts was also recognized in 2013 by the Salt Lake City Mayor’s Service to the Arts Award. Ruth Lubbers, former executive director of Art Access/VSA Utah and a longtime friend of McEntire recounted informing him of the award: “Frank, in his own quiet way, was pleased to hear that he was going to be the recipient of a Mayor’s Award. For as long as I’ve known him, Frank has promoted other artists and created projects that benefit other artists, so receiving this award was quite a change for him.” The publication of Final Light: The Life and Art of V. Douglas Snow by the University of Utah Press – based upon the simultaneous retrospective exhibitions McEntire curated of Snow’s work at the Utah Museum of Fine Arts and the Utah Museum of Contemporary Art – led to public talks for multiple audiences, including a coveted spot during the 2013 Utah Humanities Book Festival.

For each prize McEntire was awarded in 2013, his nominators highlighted his capacity to move across multiple roles while being fully engaged in his life and art. His ability to create sculptural work has continued unabated. There have been many recent opportunities to view McEntire’s visual art, most notably in the 2013 Snow College exhibition, Plurality: Frank McEntire in Retrospect. The 34 sculptural works on display provided us with the opportunity to encounter the plurality of his work over the span of 20 years, as multiple faiths and beings – through the sculptural process of assemblage – have been transformed into transcendent art, as alchemical states of being are created.

This sense of plurality is found in both material and meaning. Jim Edwards (curator, author, and professor) stated of McEntire’s work in the 2011 exhibition catalog Spontaneous Memorial: A Commemorative Installation: “I have come to think of Frank McEntire as one of our country’s most outstanding assemblage artists. He has joined the ranks of Ed and Nancy Kienholz and Betye Saar, American artists who have also devoted their art to issues dealing with social justice, politics, religion and spirituality.”

McEntire’s inspiration for his own art ranges across time and geography. From Medieval and Renaissance art, to Native American and Tibetan art, he is drawn to the formal aspect of many cultures’ work along with the spiritual domain they occupy. “Discarded religious objects from many faith’s traditions become ‘stand-ins’ for shared values in my work,” McEntire says. “My juxtapositions and configurations exploit religious imagery as commentary on contemporary is- sues, often with subtle humor. Although my assemblages and other works are personal explorations of societal issues and spirituality, they nonetheless challenge a viewer’s own beliefs and assumptions. In the process they, too, become participants in creative practice.” The work of the American artist Joseph Cornell comes to mind, with his intricately constructed worlds-within-boxes. McEntire’s respect for Keinholz’s work, mentioned above, ranges from subject to size as McEntire envisions creating his own assemblages and installations on a larger scale.

Inspiration comes across multiple wavelengths for McEntire as his curiosity appears boundless. He often wrestles with an artistic idea until the truth is shown and the material comes forth. Materiality becomes a manifestation of the artist’s self, as the work begins to form. It is a process of doing, of knowing, as Robert Frost wrote, “how way leads on to way.” McEntire’s curiosity stems from the numinous: “the glue that holds the human and environmental fabric together,” he says. Through his acknowledgment that we have the capacity to be both highly spiritual and also nonbelievers, he finds confirmation that to be able to question oneself is to be able to gain solid ground in an ever-shifting landscape. The artist is thus the conduit, the person able to create out of the ether “and through the discipline of doing,” McEntire says.

In October 2013, McEntire decided to forsake employment in the philanthropic industry and focus solely on his artistic practice. His 1,000 square feet of rented studio space will, his landlord obliging, double by the end of the year to accommodate a concept area along with expanded work space, and a small-works foundry. He will continue writing, conducting research, and creating art. McEntire is brimming with ideas, looking forward to collaborating with sculptors, museum staff, and publishers. One museum exhibition proposal involves taking a Buddhist, Hindu, and Christian piece from the venue’s permanent collection to use as “patron saints,” integrated among his own work related to those three great religious traditions. Another project, termed “Sacred Spaces in Found Urban Places,” will find McEntire turning small nooks and crannies within the public sphere into exhibition sites as he inserts his own work into these spaces. The creation of work within these grotto-like settings will result in both photo-documentation and altars cast for a future exhibition.

The past is present as McEntire hopes to revisit his 1992 curatorial triumph Dreams and Shields: Spiritual Dimensions in Contemporary Art (Salt Lake Art Center, now UMOCA) by asking the question, “How have those artists and their work shifted in the last two decades?” No small task in an exhibition that gathered the work of 40 artists from seven Western states. McEntire’s ability to ask the question, though, speaks volumes to his interest in the work of others and his place – through multiple ways of being – within their art and within the spiritual.

McEntire’s gaze continues outward in the knowledge that, as he says, “the divine is where you find it.” The evolving and continually interconnected spaces of his life and art caused McEntire to be considered, in 15 Bytes’ inaugural year, one of Utah’s first 15. We look forward to what the next 15 years will bring from this acclaimed and accomplished artist.