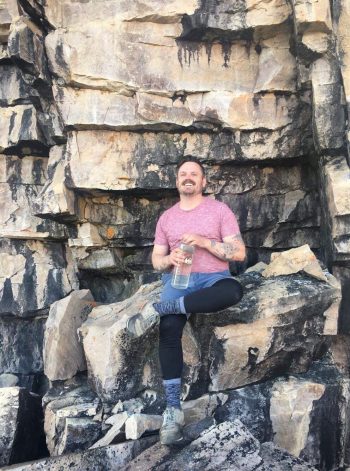 Happy National Poetry Month! For this issue of READ LOCAL First (the world’s premier archive of Utah-related writers), we introduce Gray Thomas from Salt Lake City, Utah. Thomas holds a BA in English from the University of Utah and a Masters in Strategic Communication from Westminster College.

His writing has appeared in Unshod Quills, Drunk In a Midnight Choir, enormous rooms, Button Poetry, and Write About Now (among other publications). His work is forthcoming in the Winter edition of Plainsong.

Two of his poems below, Birds  and The Scent of Black Tea, were part of a collection (This Is How Astronomers Look At The Earth) that the SLCC Writing Center selected as part of their 30/30 contest in 2019.

Gray is known for crumpling paper into balls and throwing them behind him. The papers contain love notes or apologies. “I have fallen in love and apologized so often,” he says.

birds flew out of her mouth

and flew around the room.

At first it was beautiful.

We all thought it was

a party trick. A nightingale

After the 7th bird

to become a bluebird.

He focused on turning his hair

into feathers, turning his voice

into chirps, his feet into tiny claws.

He gave up his career

in finance. One day

he just pecked at their shoes.

she spoke only of him.

There’s nothing to it

and that absorbs the shards in your belly

so the glass doesn’t cut up

the lining, but the risk is always there.

so that you don’t

The glasseater does not recommend

the fine china. Nor does he recommend glass figurines

his mother once owned.

The glasseater recommends that you avoid

his father’s coffee mugs as well.

The glasseater has several other

items you could consume.

The glasseater has the vase from 10 years ago.

His grandmother’s porcelain duck. She passed away a while ago,

so he assumes that it’s fine to eat.

that his ex left him.

The top is edible.

He doesn’t know what to do with the wooden legs.

The glasseater ate the salt and pepper shakers.

He didn’t mean to.

He was seasoning his plate of freshly prepared glass shards

Now he just keeps a pile of salt and pepper

on the center of the table.

Needless to say, the glasseater doesn’t have any windows.

The glasseater can throw all the rocks he wants.

tell me about how you are inexplicable.

I want to see how

the worker’s fingers are calloused in the

joints where he holds a hard

handle of a hammer, banging away against a bench

or a wall. How it soothes his joints when

he grasps his wife’s soft.

Don’t tell me the worker is lonely.

I want to hear about the laborer’s fingers

falling off after swinging the hammer

against a wall for reasons

he is unsure of and now

he has no finger to wipe away his

But when you show me I want

I want to like it, but not know why,

or the feel of glass medicine bottles.

Wives cry all the time when their

husband is a worker

who is missing his fingers,

but long for the ridges of fingerprints.

which is why she is fucking the foreman.

(Something something about the foreman’s wife,

but now we’re getting out of hand.)

(Now you’re showing me too much.)

Let’s just focus on the foreman.

This is also a labor. To push

another man inside you while

remembering the color of husband’s eyes.

This is also a form weeping.

while grinding out his eyes with a hammer.

The Scent of Black Tea

When Jason came back

from the war over there,

he was exactly the same

as when he left,

only a gut full of desert

that he couldn’t digest

and a hot sun that wouldn’t

As the days became tomorrows,

he kept being Jason

but one night at the bar,

I asked him what he remembered.

but the way the whisky slid

I could see someone

burning in his eyes.

He told the police

it was the scent

that made the holes in the wall,

that ripped the carpet from the floorboards,

that set off his service pistol,

that made his wife

remove all the glowinthedark stars

of their son’s bedroom.