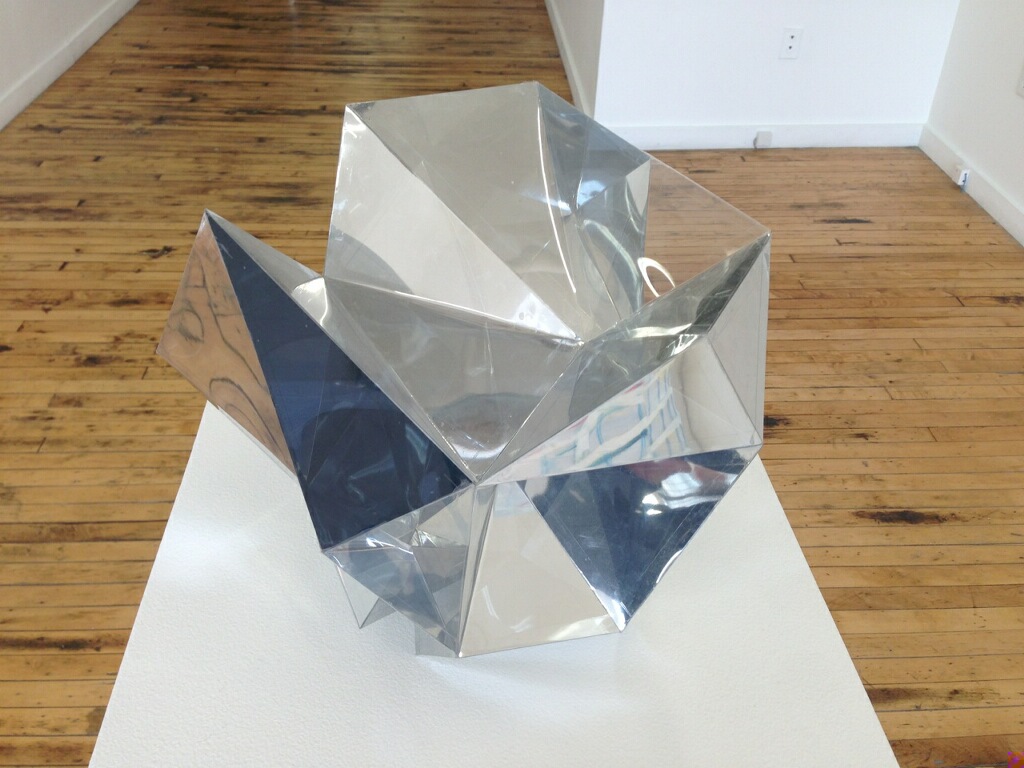 In a January 2014 article Catherine Craft reassessed a 1970 Whitney Museum exhibition by African American artist Melvin Edwards asserting, “A reconsideration of Edward’s exhibition reveals its seminal place in art of the period as both an incisive response to the most radical forms of sculpture and installation and as an uncommonly nuanced articulation of social and political issues.”

With a deliberate choice to ignore any context of “nuanced articulation of social and political issues,” Craft instead focuses the article exclusively on “response to the most radical forms of sculpture and installation.” Craft considers “The rigors of conceptual geometry underlying Edward’s configurations of barbed wire planes and the way he articulated the entire space of the Whitney gallery — ceiling, wall, corners and floors — take minimalism as a point of departure, while his enlistment of an unconventional material yielding undeniably expressive effects align these pieces with those of artists initially associated with the term ‘anti-form,’ who are today considered ‘Post-Minimalist.’”

Exactly one month shy of four years earlier, in the December edition of Art in America 2010, Alexander Gray also wrote on the subject of Melvin Edwards, saying  “Though Edwards’ work has long been seen as a product of African-American indignation and pride, today, we are able to recognize his sculptures as something more varied.  Shapes by no one exclusive concern documenting either content or form, they occupy a space between sociopolitical narrative and personal expression.”

Seeing the content of these two articles, considering the same artist by the same art publication, one might experience a telling example from the former of what is best expressed today as, “a return to formalism.”

Attending the current juried show at CUAC, “Utah Ties,” I purposefully sought a “tie” I was sure would be descriptive of “Utah Ties.” As I spoke with juror Adam Gildar, of Gildar Gallery in Denver, for forty-five minutes, based on my initial question — “What did you see, while judging the work (over 500 entries with 52 accepted entries) that seemed distinctive of Utah’s art?” — Gildar alluded to a concentration of works with subjects of advanced formalist composition.  Gildar found that a substantial number of the strongest juried entries had as their strength the bold use of formalism, often as subject.

What is most remarkable about Gildar’s observation, not recognizable by him, who knows very little of the art of Utah, as he associates it with global phenomena, is that  when considering the art of Utah, not only is there is no “return to formalism,” but we can say with boldness that we never left.

Ours is a tradition that discovered itself with its very roots in formalist abstraction, although not coinciding — this makes no difference.  This is strongly evident in the works of Minerva Teichert, whose work bear strong formal resemblances to the structural working of Cezanne.  Instead of using chiaroscuro for volume she implied it with shape of hue and tonality.  Maynard Dixon’s later Utah subjects were galvanized by both plein air impressionist formal technique and an articulation of color responding to light in given conditions and different environments, forever in flux, as it is in reality.  Also an accurate use of cubist structuralism suited the boldness of form he so desired.  The legacy of LeConte Stewart leaves a landscape tradition with an open door to an array of various post-impressionist formalist semi-abstract techniques for the sake of authenticity to realism in any given condition, at any given location.  With this tradition of formalism, abstracted landscape artists blossomed with the plein air style and a tradition of formalist abstraction, as is seen at CUAC presently.

What Utah had that other art centers lacked was a conservative establishment that demanded painting while the 1980s saw the “death of painting” universally.  Today, in a most healthy and vigorous environment of painting that is Utah and Salt Lake City, instead of an international scrambling to return to form, the sublime and mystifying beauty in the spirited landscapes of Mark Knudsen might be realized by the sensibilities, a total conceptual abstraction by one of the very most gifted of abstracted painters bar none, Darryl Erdmann’s work may be enjoyed for its intellectualism, or the metaphysical compositions of Paul Vincent Bernard — a penetrative and indefatigable journey through existential reality — can be appreciated for an unparalleled use of form so finite in exacting line, while so infinite in universal consciousness.

One piece that helps substantiate this Utah “tie” comes from the unique vantage point and quality of art of Sean Moyer.  Moyer has been a resident of Utah for 10 years, after graduating from outside of Chicago to attend the fine art program at Weber State.  Although only a senior in high school taking senior advanced art classes, he was aware enough of the goings on of the “art world” of Chicago to understand the already well-advanced trend of street art, something seemingly ever present in the ultra-urban inner-Chicago.

In Moyer’s studies at Weber State, he was inspired by a theory introduced by an art exhibition at the New Museum referred to as the “un-monumental.”  The theory of the “un-monumental” is a response to contemporary artists and their works of art, considered monumental — artists like Richard Serra, Marc Quinn, Jenny Holzer, Rachel Whiteread, and Robert Indiana representing the establishment of the contemporary mainstream.

Found placed centrally at “Utah Ties,” atop a plinth, Moyer’s hyperbolic paraboloid “Silver,” encountered as it were of Waterford Crystal, is an example of “un-monumentality.”  Upon close inspection, the precise angles, the exacting measurements, the tightly adhered planes, and the demanding articulation, is actually sheet plastic joined at each seam by cellophane tape, a structural irony to monumentality.  Furthermore, layering each plastic plane is “privacy tinting,” the stuff of windows of limousines and top-of-the-line Mercedes Benzes, this tinting to this already mocked-up crystalline form only furthers irony.  The artificiality of the celebrity and elitism of monumental artists seeing themselves as monumental, when in reality, we are all as fragmented as Moyer’s planes and cellophane.

A worthwhile departure to a second, even more descriptive piece exemplifying the possibilities of an artist’s maturity of formalism, parts to an abstract whole, but with an essential gravitas, is “Installation of Thirty Sculptures.”  This sculpture of upright twigs, wooden stakes, branches, nubs of sawed wood, even a concrete upright mass, when interconnected by barbed wire, nails, wire, and other metal filament, creates a most unique irony to the monumental establishment. 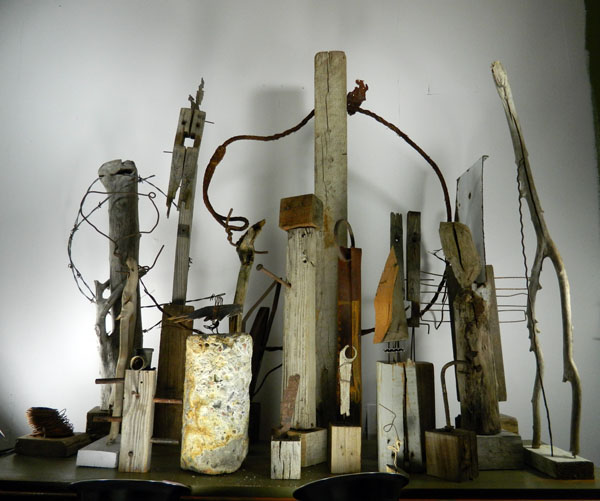 Meanwhile English artist Marc Quinn creates a life sized exacting replica of Kate Moss in an extreme yoga posture.  The structure is finely and smoothly articulated ceramic, with the face the very embodiment of Moss’s visage.

There is no comparison between these two sculptures of one’s beauty to the other.  One is a beauty that is intense, that is organic, that is fierce, to the core is honest, is pure, is massive, is sublime, and the other beauty, it is simply a beauty of complete absurdity.  Of course of the former I address Moyer’s magnificent sculpture in the raw, a sculpture with an outer and inner strength that looks, or to the sensibilities feels, as true, as right, as real as this sculpture actually is.  The Quinn is pure art bunk and insults the intelligence.  Thus a truly unique irony indeed manifested in a sculpture of such ingenuity that defies norms of taste.

Sandra Brunvand, Roland Thompson, Claire Wilson, Christine Baczec, Laura Sharp Wilson, David Wolske, Camilia Lund, Peter Everett, Jonathan Frioux, Kyle Jorgensen, and Cara Despain are just some of the exceptional artists whose formalist abstraction is most boldly perceptive as weight bearing.  These artists are not monumental, these artists are not “Pop,” or “Street,” or a “return” to anything.  These are unique artists using unique methodologies to creating unique art to perpetuate unique ideologies, vision, personality, individuality, emotion, consciousness, sensitivity, conviction, and being, from each unique expression, utilizing mature, unique form; the tie that binds.