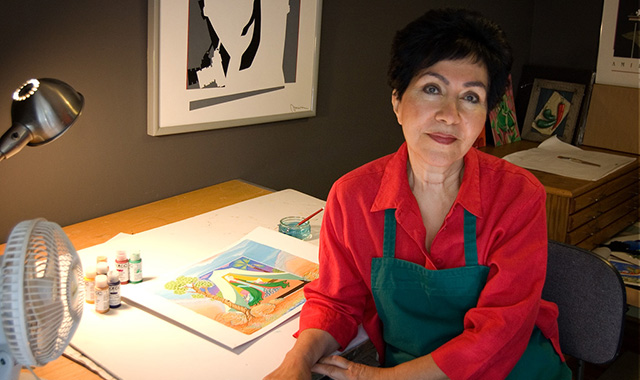 A passage can be something literal, a tangible progression from one place to another, or it can represent something metaphorical, a life journey of gained personal experience, and the personal development it manifests.  Utah artist Fahimeh Amiri, who is one of the featured artists in the Springville Museum of Art’s current show Passages and Pathways, has gone though both literal and figurative passages in a lifelong span of development.  An insatiable love of art — first discovered when she was 5 and her mother found her bedroom covered with artistic design and exclaimed “Fahimeh’s an artist!” — would take her from her native Iran, to Boston, and then Utah, and propel a career that has spanned Persian miniatures, poster design, children’s book illustrations, and stylized cubist-like geometric works. Amiri’s talents and abilities as an artist, and as a cultural liaison, span East and West, ancient and contemporary, traditional and progressive. Her evolution is a passage from one place to the next, and of one culture and artistic progression to the next in an ongoing formation and discovery of self, that through her art and teaching she has shared with many.

Amiri grew up in Tehran, an only child who was very artistically skilled at an early age. When she was 9, her mother took a drawing of hers to the famed painter Hossein Behzad. “He was the great Persian miniaturist at the time in Iran, and he would not accept any pupils. But when he saw my drawing, he said, ‘I’ll see her.’  So from that age, I was under his tutelage,” says Amiri.  Behzad worked in the traditional style of the early Persians. Traditional miniatures have a very flat application to all aspects of the composition — the primary subject, any secondary subjects, walls, floor, and even the sky and clouds.  They are lined with minuscule details — floral, graphic, and religious — that tell a story symbolically. While Amiri learned these techniques, master and pupil would sit on a Persian rug while Behzad smoked opium. Behzed’s work, marked by careful design, colorful compositions and a very human storytelling capacity, would have a strong influence on Amiri’s own. 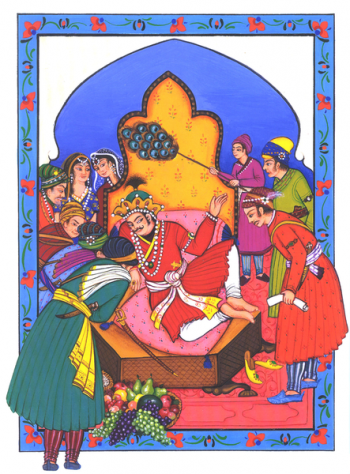 From Behzad’s studio, Amiri went to Tehran’s prestigious School of Fine Arts, which she attended for three years, from 1965 to 1968, becoming the first girl to earn the school’s highest honors. “I received national awards from the Ministry of Education and Queen Farah.  All of my valuable art learning took place with the intensive program of the Fine Arts School, where we had to cover everything from sculpture to graphic design, from old masters, artifacts, textile design, Persian Miniature, everything was in depth.”

In 1968, Amiri moved to Boston to continue her education at the Boston Museum of Fine Arts/Tufts University, where she graduated with a BFA in 1975. In Boston she married a fellow Iranian and began a family (she has three children). She also gained international attention with exhibitions of 13 original poster designs. These images are crisp compositions of cut-out shapes – furniture, animals, musical instruments — with powerful contrasts created by color arrangements and design elements that are never statically placed but use every corner of the picture plane to create shifting balances.  The stylization of these posters would find their way back into her current graphic style.

In 1989, she moved with her family to Salt Lake City, drawn here by the “striking geographical resemblance to my native city of Tehran, and my affinity for outdoor activities.” It was here that she embarked on a career in book illustration, a form at which her early master, Behzad, had excelled. Amiri’s book designs are imaginative and draw on the ancient culture of her country and her own personal ethics to share stories with children.  Amiri might use a boldly decorative scene of a colorful and energetic festival from days of ancient Iran to educate children on their past, or delight them with the fantastical and jubilant crowds occupying the streets in dance.

Her first book, Babri, was created around Amiri’s illustrations, for which author James S. Jacobs wrote the text, reversing the normal process for an illustrated book. Published by Kaysville, Utah’s Gibbs Smith, it’s the story of a curious young tiger who ventures into the jungle alone in search of answers and after a series of adventures is returned home to his anxious mother by an elephant. The images are saturated with color and sprinkled with intricate and playful design. 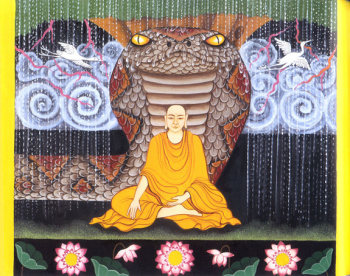 It was at this time that Amiri took up her Persian miniature style again and the theme of suppression of women would become paramount in these miniatures, as it would in later work. These later miniatures are refined with precision, and speak of the culture of Tehran, especially the role of women in that culture.  In “Beggar Woman,” a poor woman holding a child dressed in patched clothes reaches to receive alms from a man in a pinstripe suit. She resembles a classical “Pieta” but the commentary is very contemporary. In “Caged,” a woman tightly cloaked in a chador, is juxtaposed to a parrot kept in a gilded cage, each trapped in their own experience. By contrast, a work like “Drowning Her Sorrows” conveys the essence of deity in womanhood, be this an actual goddess, or a woman becoming at one with her goddess power. It is an evocation of the actual inner power and strength of the ancient tradition of Persian women.

In 1994, with the success of Babri, Amiri decided to return to Boston to be closer to the publishing world. In 1997, she illustrated The Monkey Bridge, a book by Rafe Martin that tells an ancient Indian story. Critics noted how well Amiri’s watercolor and gouache paintings effectively called to mind the ancient tradition of Indian and Persian miniature. In 2001 she illustrated another Indian story in “The Prince Who Ran Away: The Story of Gautama Buddha,” where the illustrations are both playful and refined, showing an artist capable of taking her style in any number of directions. 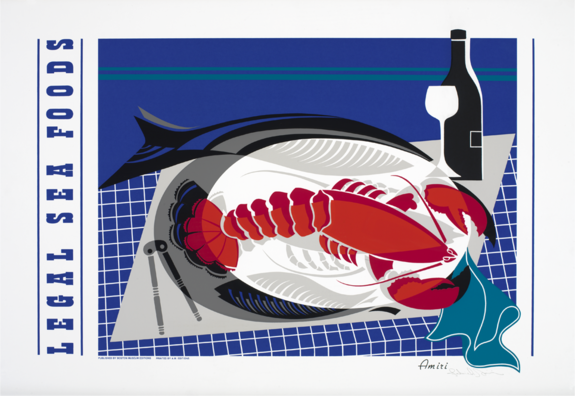 By 2004, when Amiri moved back to Salt Lake City, her work had changed from the miniature work she had been known for, to a geometric, graphic style reminiscent both of cubism and Islamic art. “At a point, I thought, ‘You can’t come up with the ancient Persian miniature to the full extent, today, you just can’t do it.  As a result, when I returned to Salt Lake for the second time, in 2004, I brought a geometric, Islamic quality.  I had been stuck, I did not know what to do, no room to grow, and I was puzzled.”

In Boston, Amiri had begun working with children and had illustrated some educational material for children. “After my art, children are my greatest passion I have in my life,” she says. She continues working with children, teaching 30-40 students at a time, in ages from 6 to 17. Working with children is what gave her the freedom to change her style. “The freedom that children use to express themselves influenced and helped me break away from the constituents; how a child sees, this was a breakthrough for me.  This freed me from Persian miniatures — everything has to be perfect.  With children there is no regulation, no limitation.” 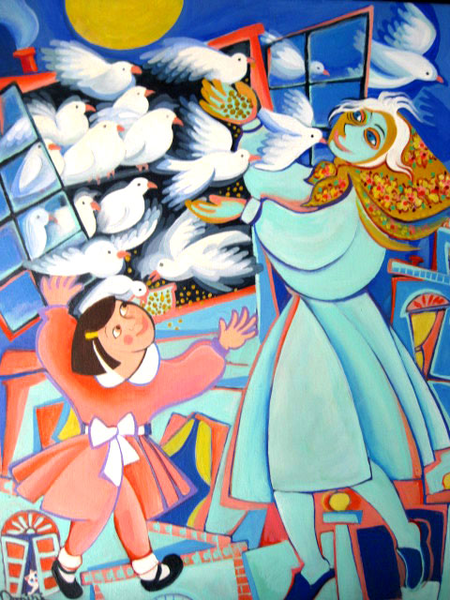 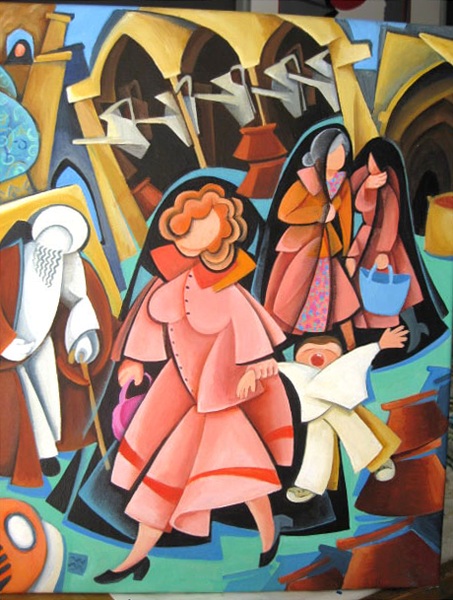 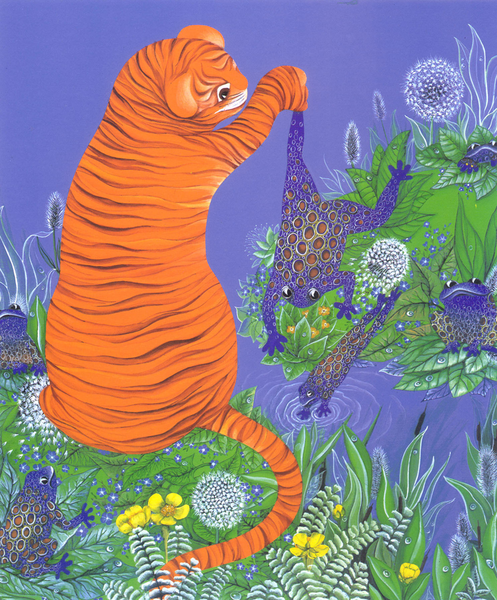 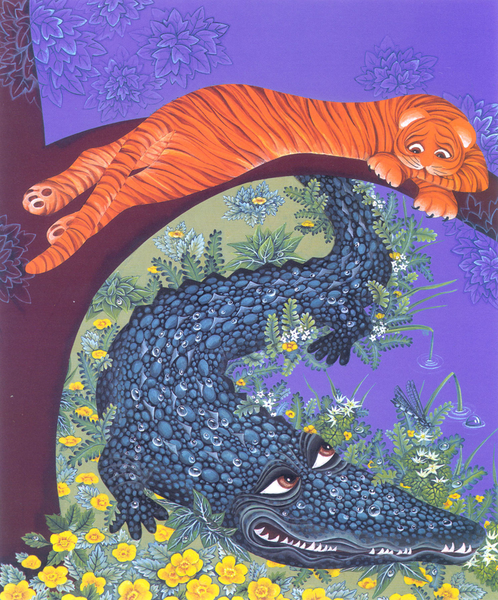 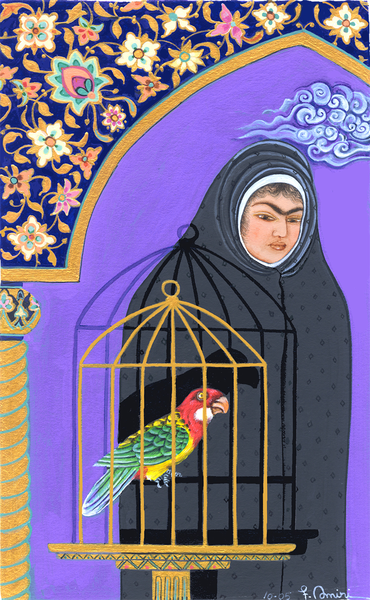 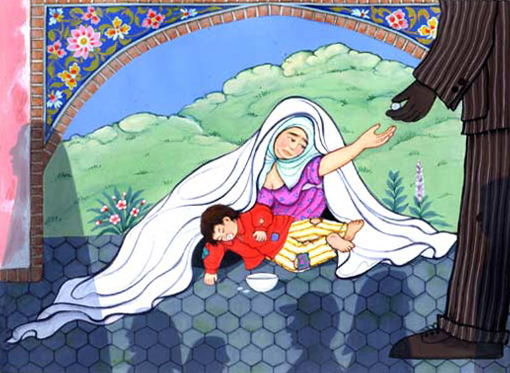 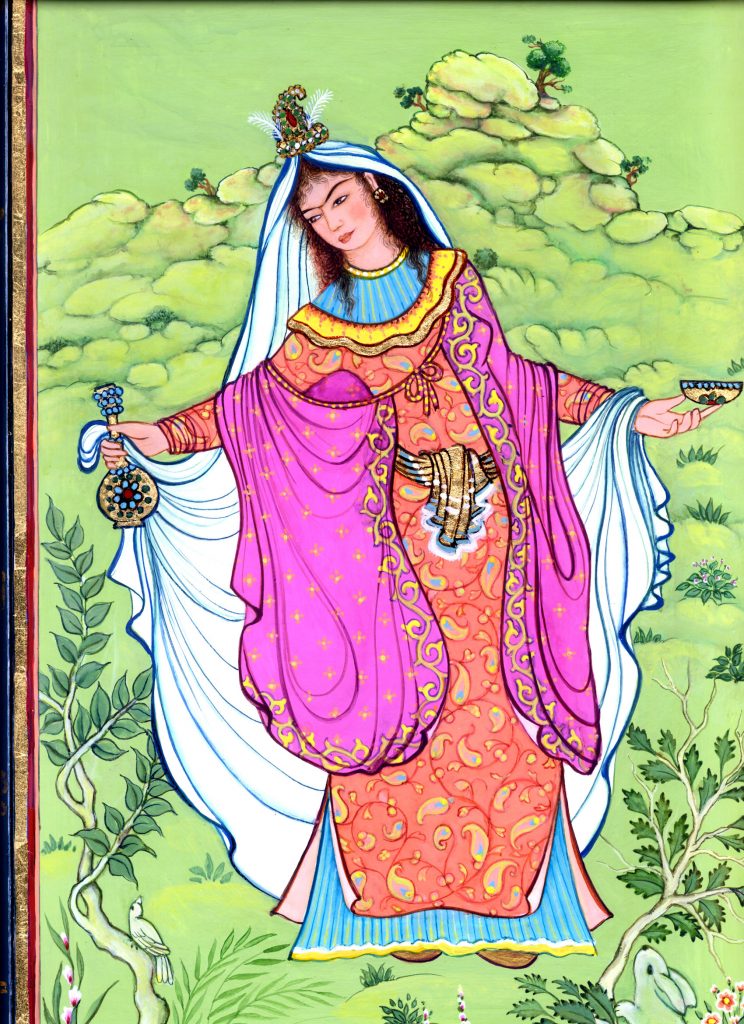 This license is translated in a decidedly bold and playful cubist influence in her contemporary work, a hybrid of her childlike freedom in form and the Iranian subjects that have appeared in much of her work. These compositions abound in line, shape, form, stylization, repetition, and stunning color, allowing the subject to shift between ancient and new, old and young, adapting to the different points of view found in the work such as the mighty and the repressed, the classical and the modern, the elated and the ethereal.

Many of the subjects are the same — mother and child, domestic interiors, arrangements of flowers and instruments. But Amiri’s newest mode allows for the plane to be broken up, in segments and various portions of the picture plane, providing advanced formal development and conceptual complexity within the picture, but also allowing for disparateness in place, idea, and utility, making a painting that is very much alive with the formal and thus elemental being.

“Bazaar” is one such emphatic painting, emphasizing the presence of the primary subject and the seeming reverberations around the subject caused by the structural distinctions.  Centered is a mother with a black cloak that opens to a rose pink frock, given a sturdy structure of unity even as the planes are divided into distinct folds, a defined top and a rigid collar.  Her hair is given a wave that is echoed in like planes of orange inward to outward, and she grasps a crying baby painted in its dress of four planes overlying the shadow of four darker planes.  This precision and structuring lends strength to the form and realism to the subject, whose parts are emphasized and galvanized in the whole — an implication of reality but also a compendium authentic to it.  Behind, an older bearded man with a like structural treatment, looks shocked in his space, while two women in the rear, hovering together in cloaks, are so close that their looking and whispering resonates as one form; and so they are, in essence.  This western approach to dress and the laissez-faire manner of the woman carrying the child rushedly through the open market, is apparently unacceptable to onlookers, yet Amiri is excellent at presenting the contemporary cultural situation in harmony with the past: the cubist-like articulation creates this tradition in a single manifestation. 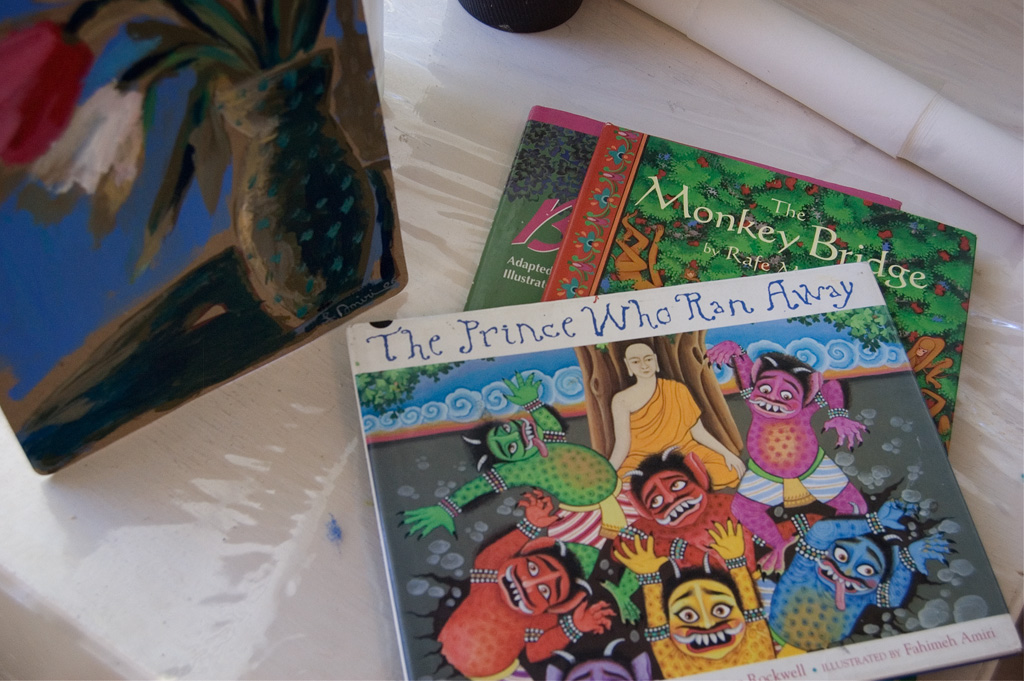 “Prayers” is a powerful and profound painting in Amiri’s new style. The articulation of the geometry shows women, each as if behind a brightly colored curtain, praying in a shrine.  Are they praying for their children, their ancestors, themselves, for what they have seen, for what they wish they had not, for the freedom they wish they had? We cannot know what they pray for in this abstracted use of form that displaces all sense of reason.

Another beautiful and joyful image in Amiri’s newer style is “Feeding Pigeons With My Grandmother.” This has the same cubist articulation that defines strength of form, individuality, sense of place and of being, and the mood and atmosphere of the painting.  The young girl and grandmother, are brought together in a synthetic-like cubist expression of bringing together,that animates their relation, gives a genuine pleasure in their being together, while above, white pigeons, or doves, fill the space jubilantly.

Building upon her past, with one area of strength building upon the next, Amiri’s mode of expression today is absolutely distinct, a current expression of her life’s passages and pathways, of her native culture and her own aesthetic development. Beginning with the Persian formal tradition, she has formulated a contemporary geometric style well-suited to her astute cultural critiques of her native Iran. While she has made America — where she has the freedom to explore these subjects — her home, her heart and her art remain ever intertwined with the women of her homeland. 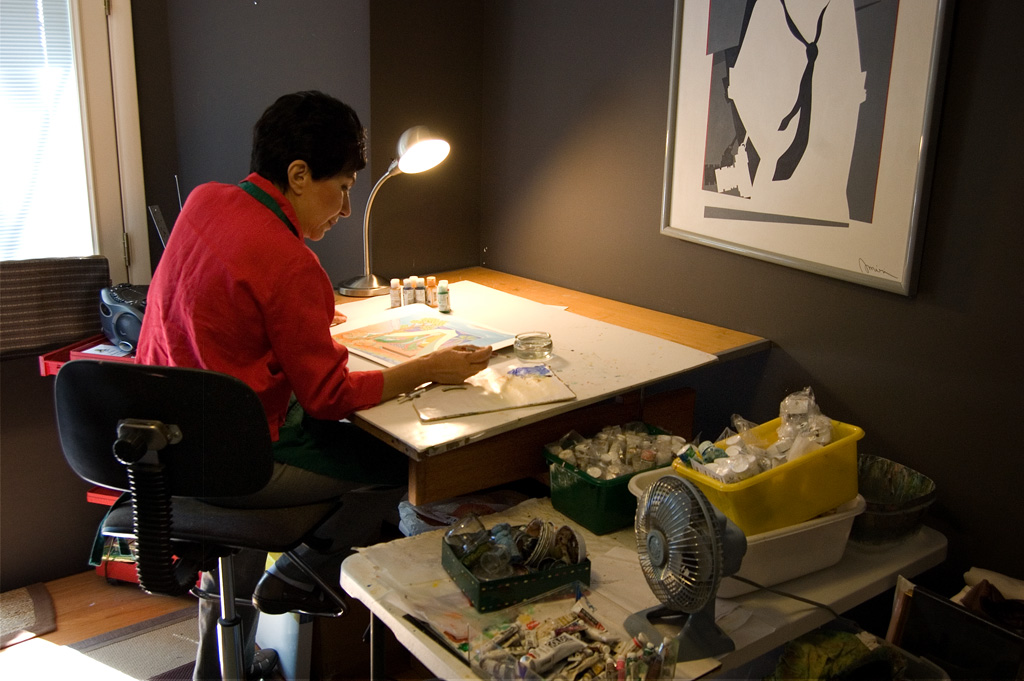 Fahimeh Amiri’s work will be part of the Springville Museum of Art’s exhibit Passages & Pathways, September 12 – November 1. You can view more of the artist’s work at amirifinearts.com.