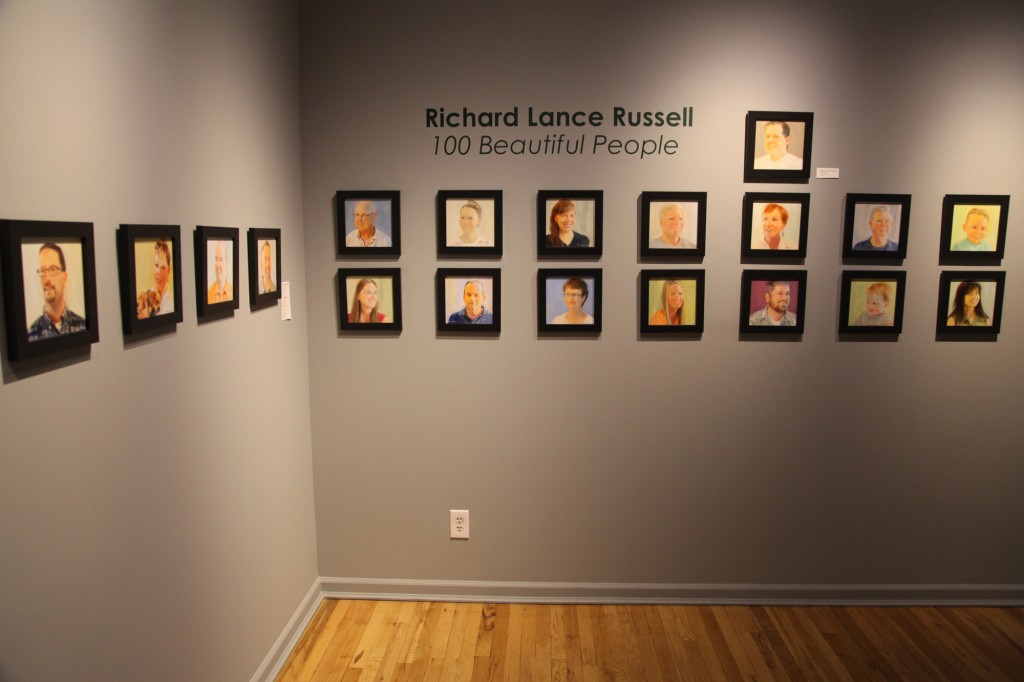 How one perceives the world, and how one is perceived by those in the world, constitutes much of one’s sense of being-in-the-world. One’s sense of reality can often be dependant on one’s inner states of being, determined by the physical, cognitive, emotional and spiritual self. At the same time, so much of who one is as being-in-the-world, is defined by who one isn’t, and by one’s relationship to the concept of the “other.” This reconciliation of the interior self with the external world is a central concern in our contemporary, individualized age, and one taken up by two divergent but complementary shows now at Finch Lane Gallery.

The first, in the west gallery, is 100 Beautiful People, Richard Lance Russell’s series of 100 small portraits of people from a variety of backgrounds and cultures, of different ages and genders, arranged in uniform, square frames. A title like “Poet” might give away something about the sitter with the shorn head and the intense gaze, but most of these portraits are context-less, open to the interpretive fancy of the viewer. “Mark” seems like a guy you could borrow a snow shovel from, or ask for help jumping your car. “Papa Jeff” might be a plein air artist, or a botanist; and “Kathy Jane” might be a costume designer, or a mother of eight. In his statement, Russell encourages the viewer to take a moment to engage with each portrait, and to “look for compassionate eyes, a mischievous tilt of the head, or a bold smile.” But the experience and assertion of the painter and the engagement by the viewer, in regards to these many works, might be dramatically different. Russell likely knows each of these subjects individually and responds to each on a personal level, while the average viewer may find him or herself surrounded by 100 nameless, unidentifiable faces, looking into the faces, with curiosity and wonderment, and looking past compassionate eyes, mischievous tilts of the head, or bold smiles. The viewer does not merely see, the viewer looks.

Surrounded by these portraits, the viewer may have an experience closer to the existential than the quotidian. Beyond simply “people-watching,” the viewer might experience a sense of commonality, of being at one with humanity. With this sense of commonality, there might be a feeling of comfort in the unification of people of every sort, varying in age, or in experience or culture. Such a feeling of being ensconced in “the walk of life,” or basking in the beauty of humanity united in a common purpose, may be a very reassuring thing — the security found in company and likeness.

However, the crowd, as Baudelaire so lucidly expressed in his 19th-century writings on Paris, can also be something disconcerting, disenfranchising, unsettling. When the crowd one finds oneself in is not particularly beautiful, familiar or lacks a perceived commonality, any comfort or feeling of unification disappears. The surrounding crowd increases one’s sense of difference, of alienation, of being “other.” Russell’s viewers might see beautiful or ordinary people, but might not feel beautiful nor ordinary themselves, not “like everybody else.” As a viewer is unable to reconcile the simple physicality of the many, the beautiful, the ordinary, with the uncertainty they themselves feel, a feeling of anxiety may ensue. So, while to some Russell’s 100 faces may be comforting, engaging, to others they may be equally alienating.

While Russell’s show confronts the viewer with a sense self-defined by the multitudinous and outside other, Rebecca Reese Jacoby’s exhibit, in the east gallery, takes on an interior exploration of the self, though still in relation to the other. “The exhibit is about the strength and powers which spring and bolt from our own inner spirit creating spontaneous gestures of the rituals of dance and generations of human connections,” says Jacoby in her artist statement. The energetic abstractions in Fire Dances Ancestral are a metaphysical contrast to Russell’s careful portraiture, with its specific sense of being and space. The paintings are inspired by the fire dances of the American Plains Indians, who relied on ritual dances they believed would bring the fire back after the solstice and ensure posterity for future generations. They incorporate abstract representations of Jacoby’s own ancestors and explore qualities of the primordial inner-self in its multiplicity of core nuances.

The “Fire Dance” series, primarily “Fire Dance 3 Beginning,” “Fire Dance 1 Confront,” and, “Fire Dance 2 Primordial,” captures “the strength and powers which spring and bolt from our own inner spirit.” The first, “Fire Dance 3,” evokes a mythical time of beginnings — of, in Jacoby’s words “primordial beasts, the motions of mythical human plight, and the conveyance of strong descendants” — with a web of fragile line and color conveying an act or a time of conception, realization, empowerment. The “confrontation” of the next piece, with its two primary figures in a dance of domination that is nevertheless fused with powerful beauty, is also an essence of human existence as there must be an ebb and flow in all things, in all experience. The “primordial” in the third, is a balance of matter, of bright color, of heavy darks and light lights, a reservoir of the nascence of human ethos.

Jacoby reaches a more literal expression of herself in “Rebecca Reese Jacoby.” On a large canvas, equal in scale to the others in the room, Jacoby has painted an abstract figure in dark red. This figure is bowed over and one assumes that this is the artist, something more of a representation. But after a coming to terms with her work, one gets the sense that the canvas does not limit the representation of herself to the red shape, but that all aspects of the canvas, in totality, are a representation of the artist’s being — a less tangible, more expressive evocation of the artist’s metaphysical self, conjoined with the primordial essences of dance, and abstractions of those who have come before.

Jacoby’s dance is a free-form exploration of the self, achieving a connectivity that comes from being untethered from the now and the space of place. It is a metaphysical construction, derived from the abstract qualities of human origins, the ebb and flow of life, and fundamental cores of humanness. Compare this with Russell’s very concrete rendering of humanity in the 100 faces, a multitudinous other with which a viewer might feel communion or disenfranchisement. Together, these exhibits form a holistic answer to the query of one’s contemporary present, of one’s “being-in-the-world,” the formation of the self and its relationship with the ever-present “other.”