For What It’s Worth: The Life and Art of Tony Smith 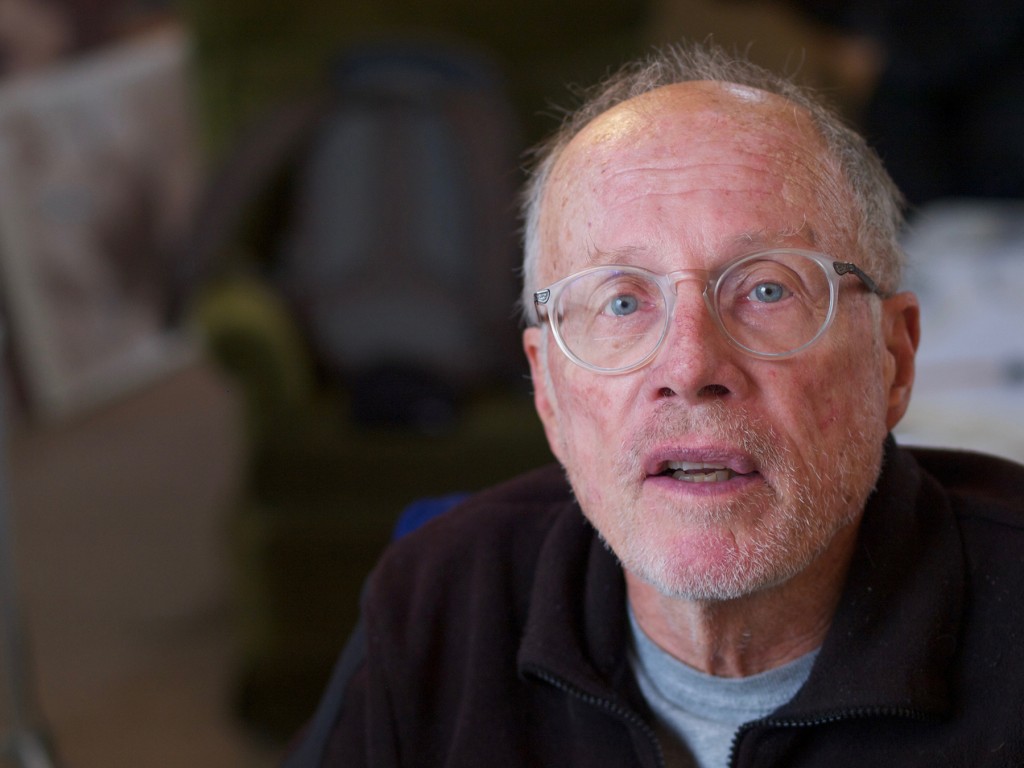 He’d rather show his work at Smith’s grocery store on the Avenues – galleries don’t agree much with Frank Anthony Smith anymore. But you can see his latest drawing, “The Big Tiny,” in a show opening January 16 in The Gallery at Library Square.

He told me last year during a studio visit that the library “kind of treats the drawing like a sacred papyrus. Which it kind of is to me, and answers the four main questions people always ask . . . How long did it take? How much is it worth? What does it mean? And, is it art?”

He looked forward to going down to the studio several days a week to work on the piece—then about the size of a card table and a half, as I recall. At 75 you can do whatever you want to do, he said. He has a few things in his daily life he needs to take care of, and he does, but the rest is drawing and his beloved golf. He started on “The Big Tiny” six months before I visited and planned to work on it until it was all filled in—another six months or the rest of his life, whatever it takes, he said. Smith explains that he is trying to do what the Cubists did and bring out the negative space in the drawing to the forefront.

Maybe someday someone will write a book on the famed painter who took up cartooning after he retired from a long teaching career. Oh, wait. Someone did . . . Tony! Titled Fuck You! FINALLY a Book About Me, the self-published effort is, as I wrote in a 2013 review for 15 Bytes, “irreverent, wicked, sly, laugh-out-loud funny . . . and an absorbing read about the development of an artist and a man” (yeah, I liked it a lot).

In the book, he describes drawing as a game he plays with himself, first setting up parameters like a crazy outline or tough angles, then going in with markers “and trying to make the whole thing feel dimensional and bumpy. In the process I discover imagery like guns, heads, genitalia, dirt holes, crosses, knives, oil lamps, faces, people doing weird things; it’s all like a kind of wakeful dreaming.” R. Crumb is a major influence on Smith’s cartooning; Chris Ware another, though he isn’t ever funny at all so doesn’t get Smith’s most enthusiastic vote of approval. Remember this stuff when you go to the library. 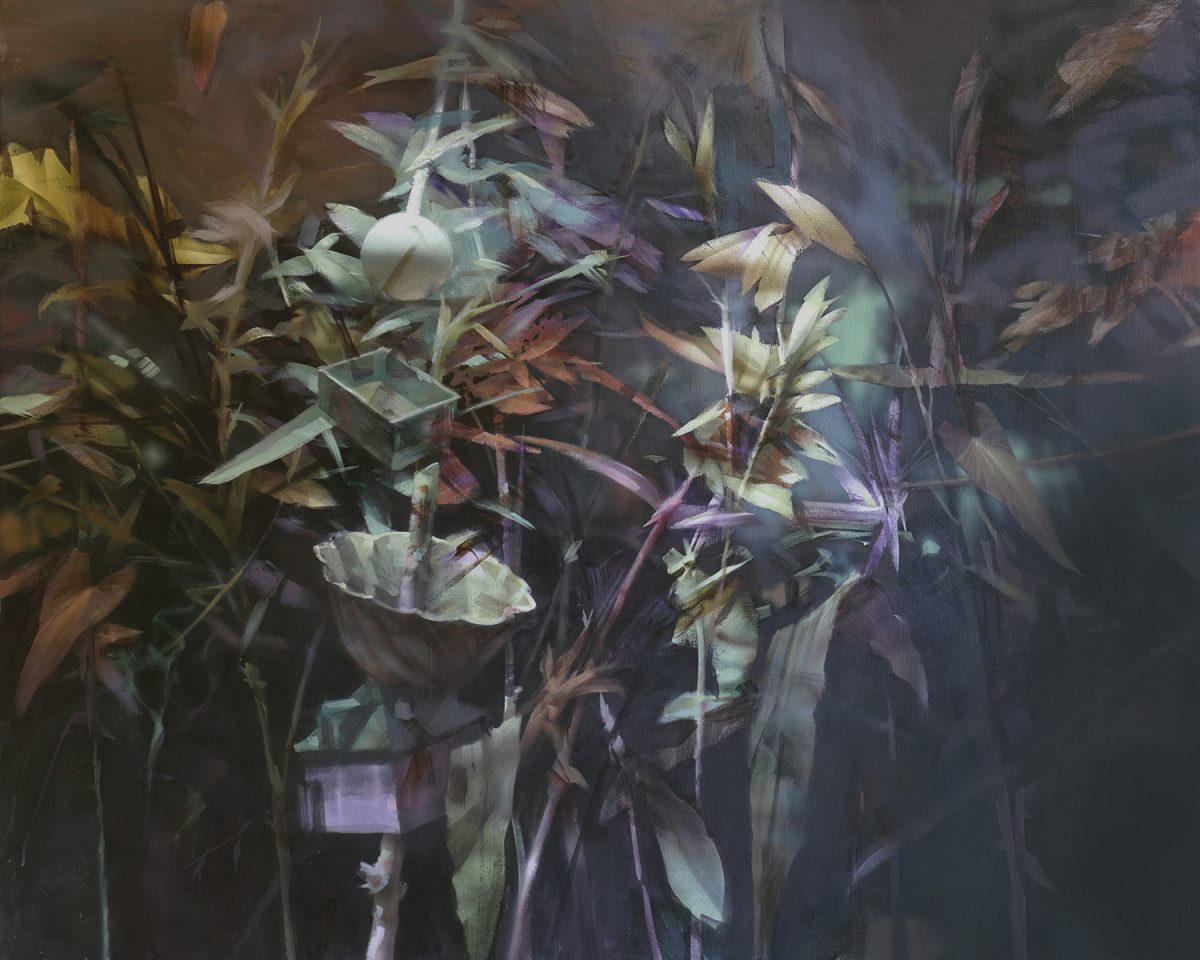 Smith earned a BFA at the U in 1961, an MFA in 1964 and began teaching there in 1966 after a stint at Wayne State University in Detroit. Fifty years ago, he was Phillips Gallery’s only sale for their first year in business on 9th and 9th and went on to become nationally known as one of the top illusionist artists working in the country. His work is in the collection of the Smithsonian American Art Museum; the National Collection of Fine Arts in Washington, D. C.; The Denver Art Museum; in Paris; Geneva; New York City; Salt Lake City (the UMFA, Utah State Collection, etc.) and elsewhere.

He quit his very lucrative painting career when he retired from the U. some 13 years ago because he felt like he was working in an auto body shop—all that masking and taping up of patterns that he cut out, and then using the air brush to get clean lines. “It made me a lot of money, and it made me famous, but at the end of the day it wasn’t very satisfying,” he recalls. 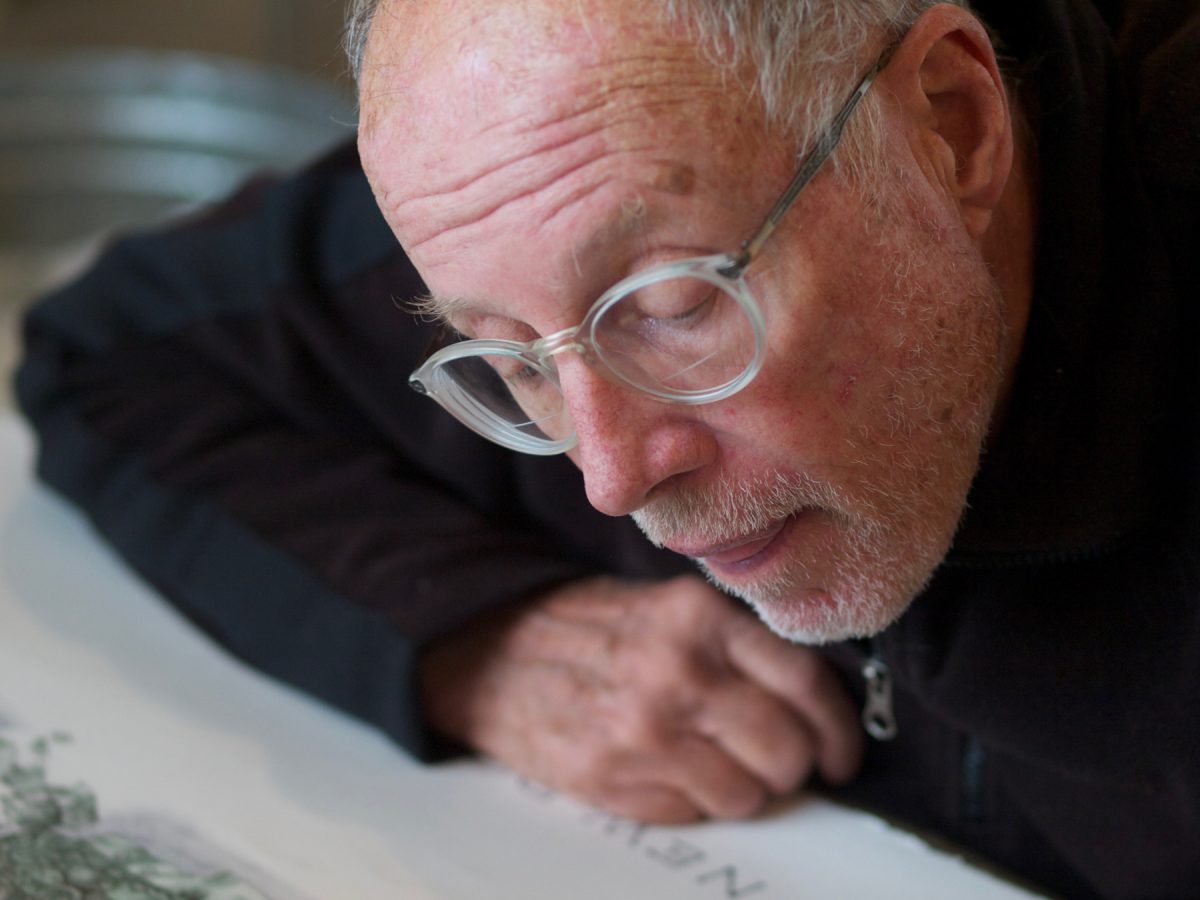 He remains inspired by his Down syndrome son Willie, however, and the world he inhabits, and still uses paint to depict that from many perspectives. Another son, Evan, teaches high school in Salt Lake City.

As a child himself, Smith was a “real pain in the ass” whose typical Catholic boyhood in Mormon country was interrupted by rheumatic fever at age 10. That gave him enough bored and lonely time to read the entire Encyclopaedia Britannica, listen to radio comedies and dramas, and develop the kind of imagination that led to his first drawing. He realized then that he could create a world of his own design. 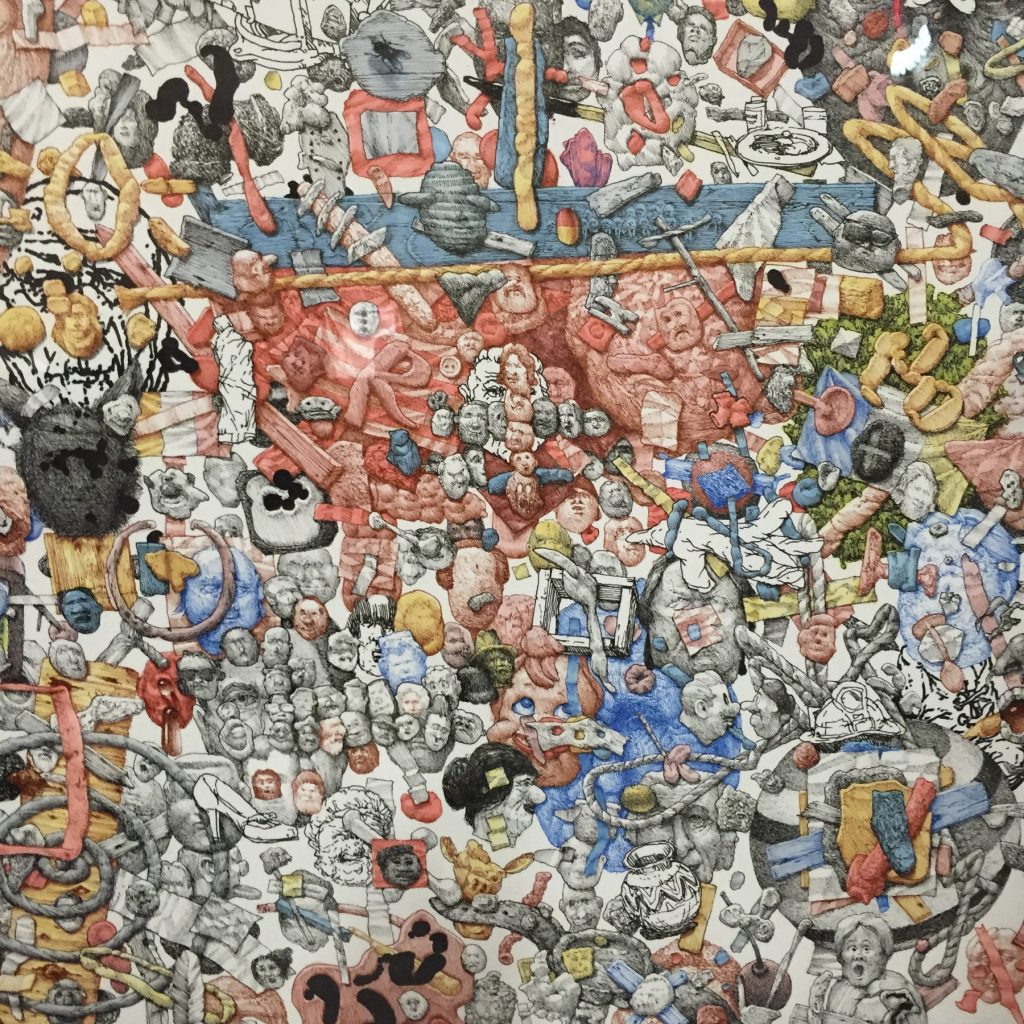 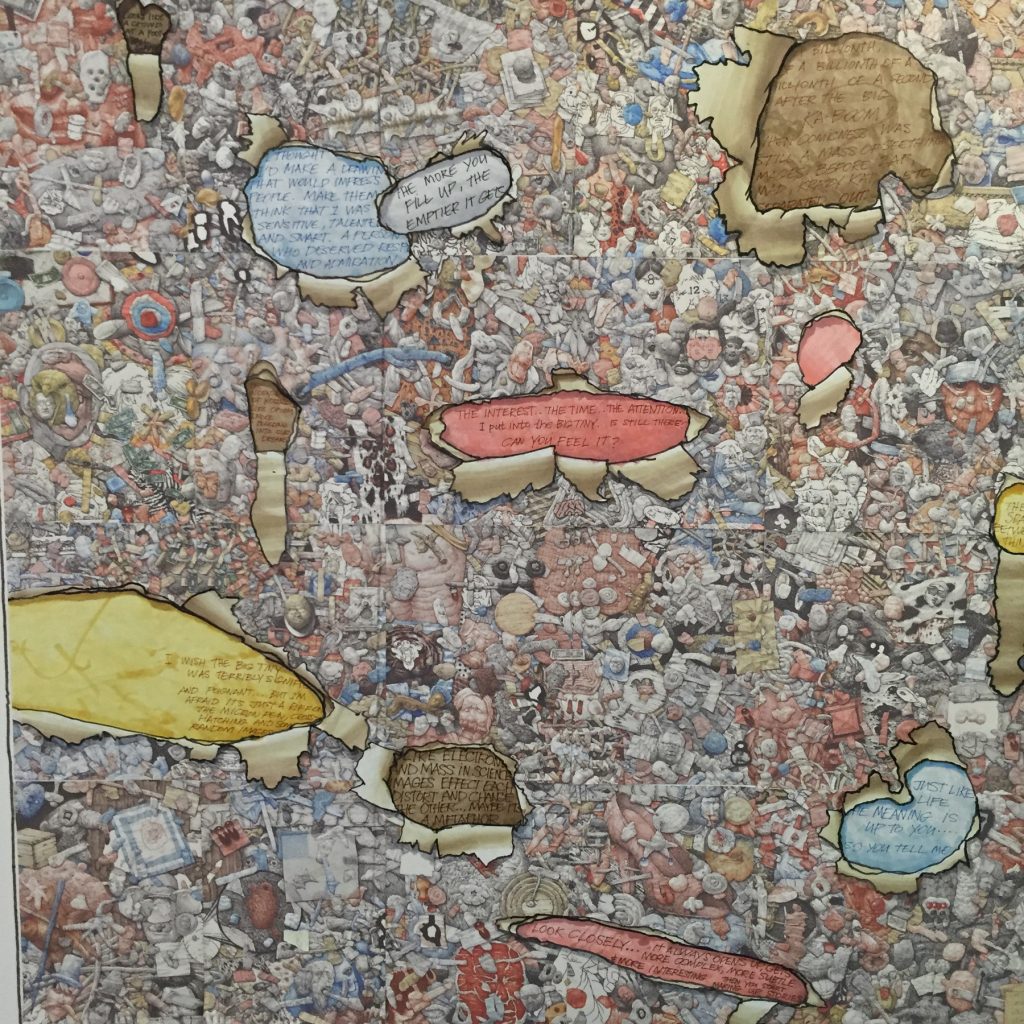 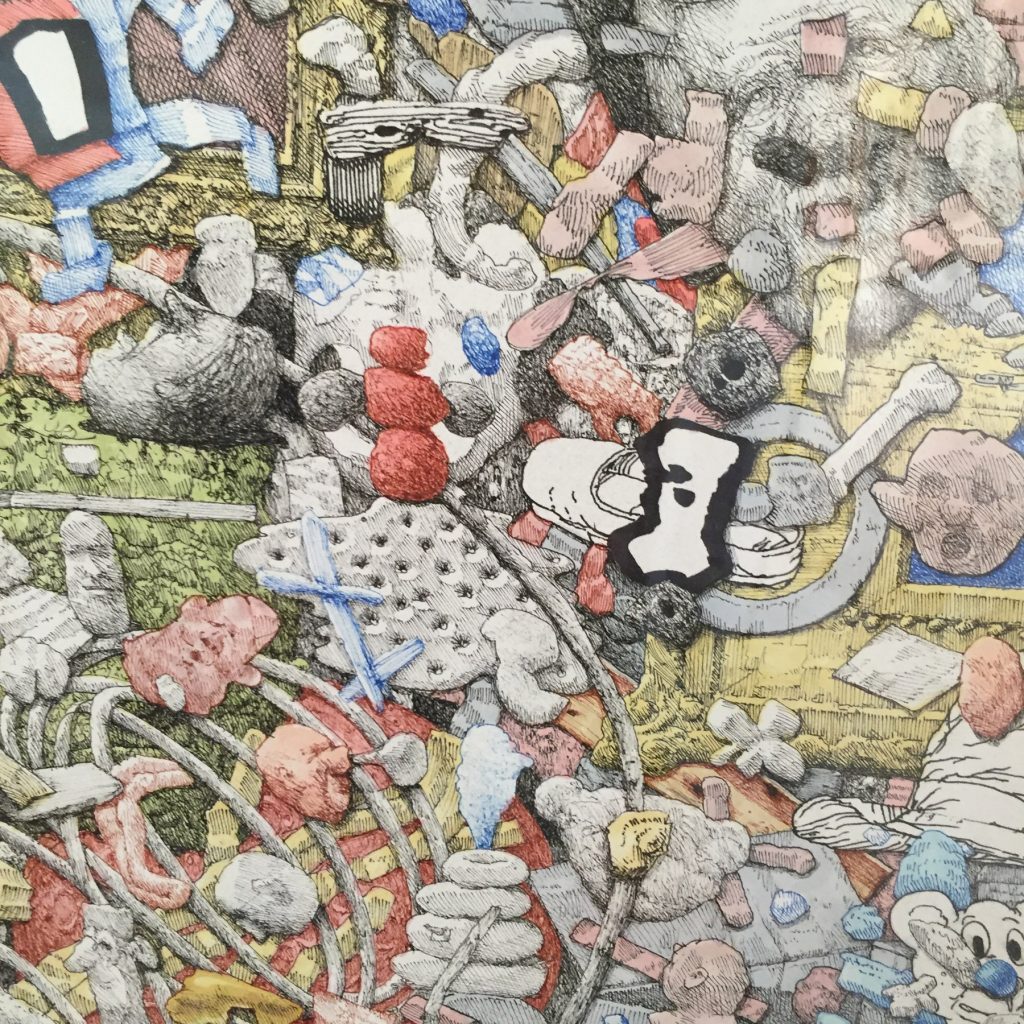 Later, he would attend parochial schools all the way through high school, serve as a medic in the Army, drop acid, lead protests against the Vietnam war, get a ticket near Springville in his hippie days for “littering” when he thought a fence in a field was much improved when hung with one of his paintings, hit a hole in one, take up smoking expensive cigars and work on the first Star Trek movie.

Some have it that Smith would arrive at class with a pan of white paint and a roller to cover up any portions of a student’s painting he didn’t like. Or that he would throw all someone’s stuff into the hallway when he didn’t think they were working hard enough, yelling, “Get OUT! I don’t want you in my class!” Someone even said he regretted being a mean sonofabitch. All legends, of course. 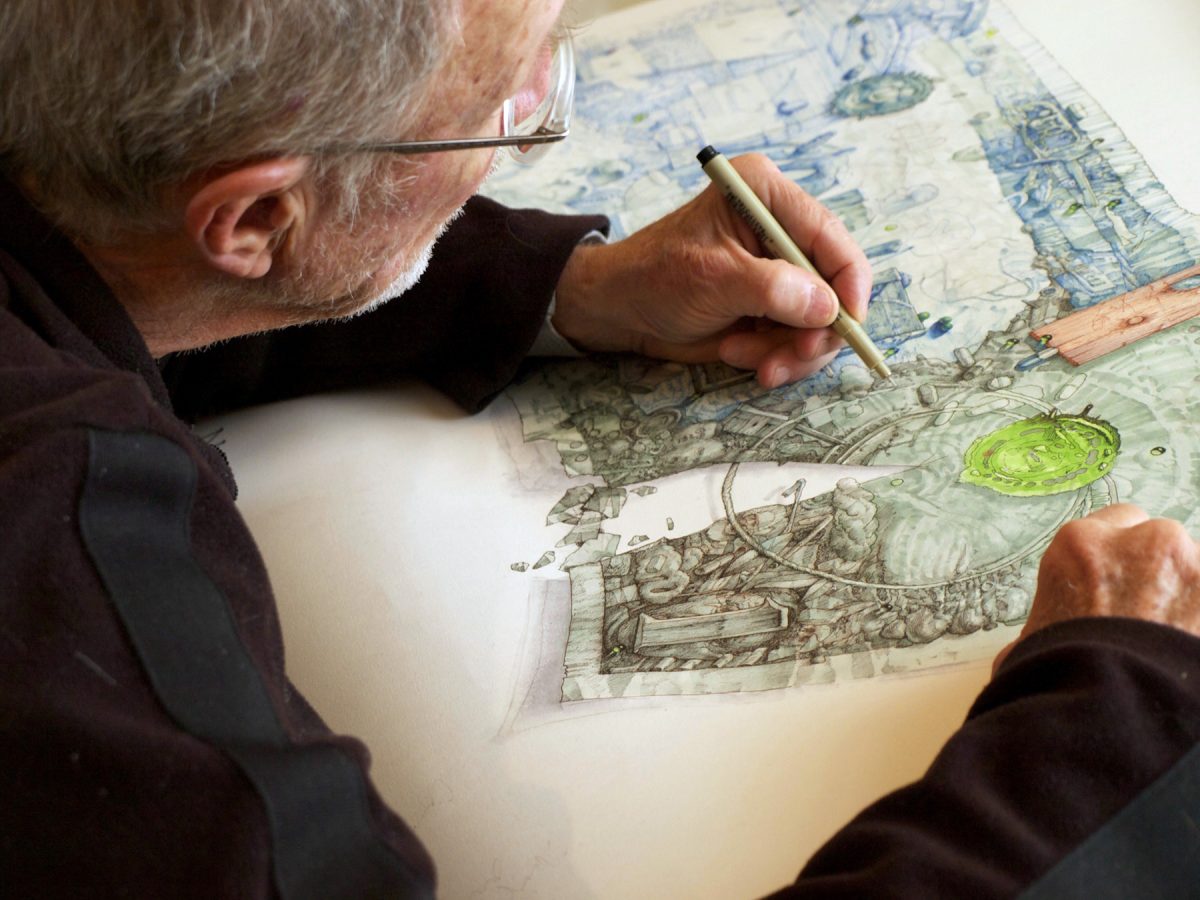 At one point, Smith decided to paint just like Norman Rockwell and Andrew Wyeth, and he did that, very handily—maybe twice.

He learned to paint landscapes because he was teaching landscape painting at the Helper workshops and figured if he was teaching the process he should probably know how to do it. Problem was, “They expect a tree to look like a fucking TREE!” he exclaims in some exasperation. “And I like to paint more the spirit of a tree. So that didn’t last.” In his 2013 spotlight on the artist in 15 Bytes, Shawn Rossiter reports that while teaching in Helper Smith, instead of giving the usual walk-by instructions, drove by, shouting out his window, “More alizarin,” or “too much ultramarine.” So he might not have lasted there, even if they had let the spirit move him.

And even if Tony Smith is a legend. 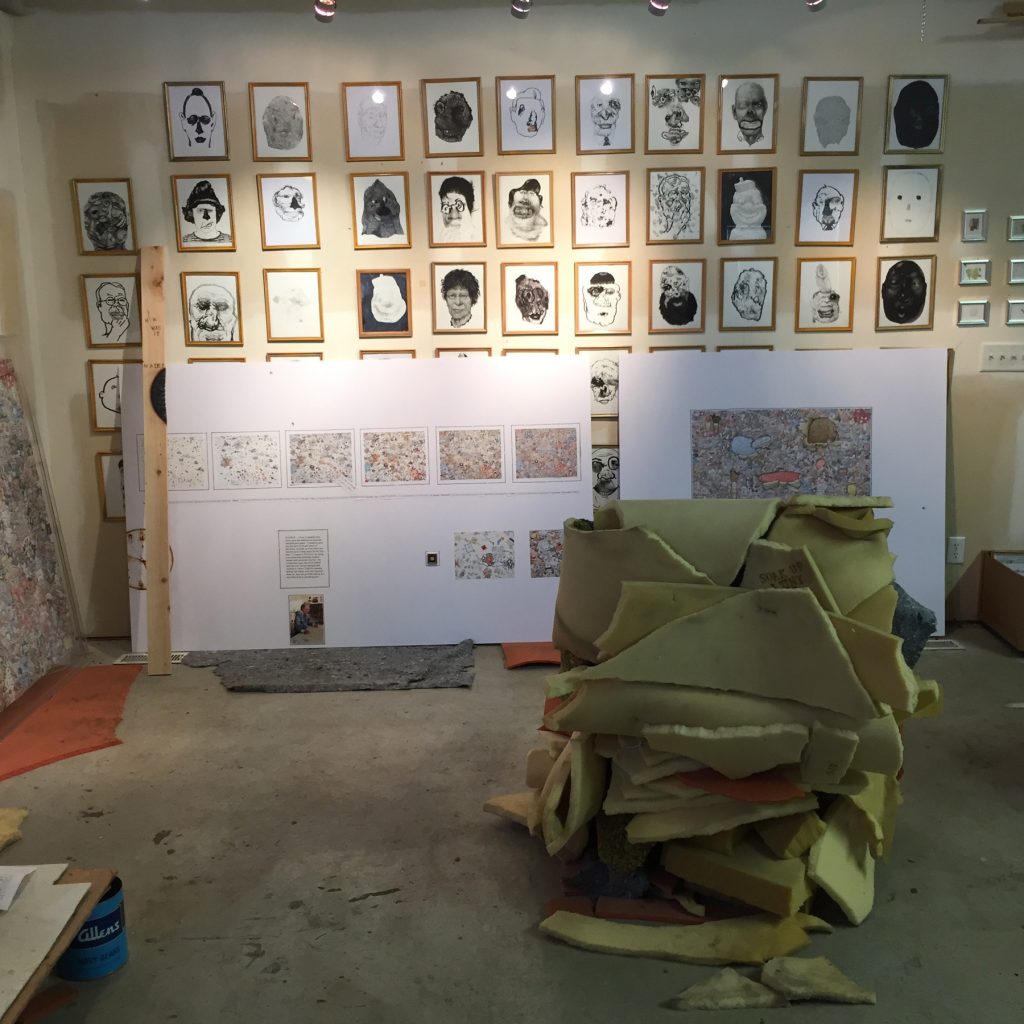 Tagged as: by Claudia Sisemore, by Portia Snow, Tony Smith