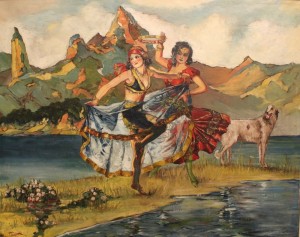 In our November 2011 edition of 15 Bytes Tom Alder took a look at the mystery of Florence Truelson, an eccentric Utah artist of the first half of the twentieth century. As Tom reported, the builder of a unique house on the west side of town – known as the House of the Seven Gables, and a tourist attraction – went missing twice. The last time was fatal, when she went missing from the State Hospital in Provo and her body was found months later by hikers.

The first time reported was in 1944, when she was feared missing after not picking up her assistance checks for two months. Police were forced to break into her ramshackle house – which had no front door – to look for her. They found a number of her fine works of art, but no trace of the artist.

We kept digging and have been able to at least solve this 1944 mystery. The same day the newspaper reported the search for the artist, Truelson was found safe in Los Angeles by the local police. On April 3, the Deseret News reported that Truelson was in an apartment in L.A. (it was possibly that of an uncle or cousins, who lived in the area) Reached by phone she said she, “often took vacations to California,” sometimes to paint. Meanwhile, police were posted outside her Salt Lake City home, as it was reported that some of the curious had tried to enter the building.

The house remained an object of interest. A year later, in August of 1945, three boys (16, 15, and 14) were arrested for breaking into the home. They broke through a seven-foot board fence surrounding what was described as a “rapidly disintegrating building” and stole two violins, a guitar and oil paintings.

Concerns that Truelson had gone missing and was in trouble were warranted, not only because of her eccentric behavior, but because of past experience. An instance in 1927 may indicate that the mental health issues that would ultimately confine her to the state hospital were a long-running problem. In the late summer of that year, when she was only 26, she was reported missing by her family and a detachment of the 3rd infantry, out of Fort Douglas, went looking for her. They found her at 3 0’clock in the afternoon, lying exhausted behind some bushes, her faithful St. Bernard looking over her. She wouldn’t let any of the soldier come near her until her father was called for and arrived.

And here are a few links for images:

Photograph of the Florence Truelson murals at the Mayflower Cafe.
A work from 1924 titled “The Kiss”

If you’d like to support this type of historical research you can make a tax-deductible donation to our Fall Fundraiser and direct it to “Historical Artists” by clicking the link below:
HISTORICAL ARTISTS