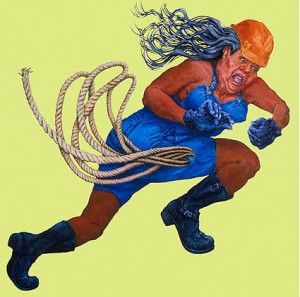 A joke popular in the mid 20th century went like this. Recovering from a near-death experience, a man tells the eager listeners crowded around his hospital bed what happened to him after he had, for all intents and purposes, died: “I went to heaven,” he tells them, “and I saw God. And first of all, She’s colored.”


V. Kim Martinez paints the sort of pictures that viewers may, on the basis of a photo or hearsay description, smile at briefly but refuse to take seriously as art. Others will reject these partial fantasies on sight because of choices she’s made about what to idealize and what to keep real. But these reactions are unfair to Martinez, who is both a serious artist and a very good painter, and will cheat viewers out of a deeper, transformative experience. The seventeen Mujeres de Colores on display at Art Access this month rewrite hegemonic history, incorporating myth, mass culture, and prevailing prejudice into an alternative vision that elevates the mundane even as it skewers illusions about status and illuminates social values. They walk adroitly through the surprisingly narrow space between deification and mockery. Hanging alongside, a dozen preparatory drawings provide a window into the artist’s technique that will dispel any doubts about how deeply her vision penetrates the bodies she paints. 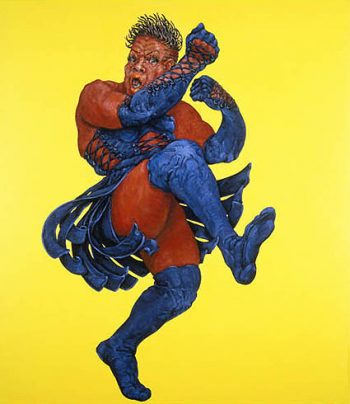 I have frequently argued in 15 Bytes that taste in art is universally retreating from the extreme abstraction of mid- to late-twentieth century formalism and moving toward a new engagement with subject matter. Furthermore, as content is reintroduced to form, Utah artists, thanks to an unbroken regional tradition of representational art, have an advantage over artists elsewhere who have yet to achieve a competent level of craft. Why else would Disney, Pixar, and other leading animators recruit so heavily from Utah art schools? A department like Snow College’s, with its emphasis on the twin development of drawing through observation and principles of good design, attracts students who seek the freedom and power that comes with the ability to create their own imagery: in essence to draw or make whatever they can imagine.

That doesn’t mean, though, that the art market is preparing to support a reheated version of nineteenth-century academic art, or that blandly realistic illustration of literary subjects is the coming avant-garde. The audience will still hunger for subjects and experiences that haven’t been represented before, and artists will still have to make the case, in a visual equivalent of rhetorical argument, for a connection between what they are doing and what preceded it, including not only academic art, but abstraction and the rest of Modernism’s legacy. 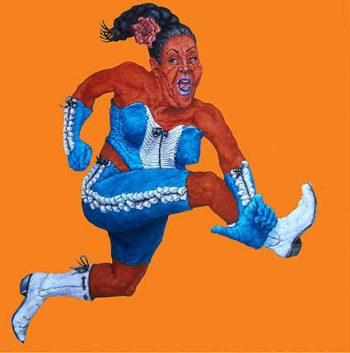 That’s where V. Kim Martinez’s combination of traditional and new approaches fits in. First, her technique is absolutely classical, right back to Leonardo, Michelangelo, and the High Renaissance. Where many of today’s artists are limited to photographing or downloading a model and modifying that image, Martinez uses her knowledge of anatomy and proportion to create and articulate original figures. She renders them believable through a sequence of drawings that explore the relation of skeleton and musculature to the skin and clothing they support. Then, using well-known genre conventions, she gives her figures the attributes of twenty-first-century fantasy heroes, complete with rippling muscles, exotic costumes, unique accessories, and dynamic poses. Finally, her command of oil painting technique allows her figures to appear as fully-realized, three-dimensional beings surrounded by open space. That they are isolated in that undefined space, curiously lacking either context or narrative predicament, means that while they make an indelible, mythic impression on the viewer’s imagination, they remain nervously ambivalent. Poised, ready for battle, they are all dressed up, but in spite of their power unsure where to go.

Three things lift these Mujeres de Colores from the ranks of comic book art and carry them into the gallery. First, there is their scale. They are close to life-sized, which lends their vitality a more palpable impact. Second, their subject matter is women of color. To paraphrase Neil Armstrong, it’s one small step for someone who was raised by an Hispanic nanny, cared for by a Filipina nurse, or protected by a Black police officer to elevate these women to something like the status and recognition they so rarely receive in our flawed attempt at egalitarian society. And it will be a great leap for mankind when we learn to value each other for the actual contribution we make, rather than rewarding looks and name recognition to the exclusion of actual merit. And third, Martinez manipulates all the elements of her paintings to make a unified statement that is instantly readable in spite of its being completely unfamiliar. 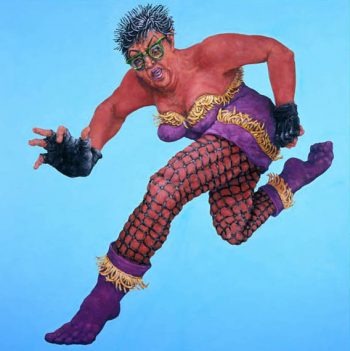 Achieving this effect begins before even a single brush stroke is applied. Martinez has chosen to paint on sheets of aluminum, rather than canvas or wooden panels. The difference may sound subtle, but the visual difference is not. A flat and smooth surface allows her to paint a background that the eye cannot readily locate in space. In this way Martinez reverses one of the key characteristics of most modern painting. Ever since Courbet “invented” Realism around 1850, followed by Impressionism, Expressionism, and most of the other — isms, painters have used the texture produced by paint application to call attention to their presence and their part in the process or to add their own visual commentary to it. Yet many noncanonical arts, including posters, album covers, illustrations, and spray-can graffiti — let alone photographs, films, and computer art — now prosper without such self-conscious reference to their distance from reality, and there is a strong argument here that if texture is a tool in the artist’s box, its lack is just as valid and useful.

Martinez’s women, instead of being located in a realistic setting, float in a light-filled space that lacks any specific reference to time or place, thus adding to their mythic status. The artist says she intends their lack of context to portray “repressed cultural memories and the imbalance of social and political power.” At the same time, the bodiless background colors are intended to create a sense of anxiety and to promote recognition of the women’s “impatience for social power structures to change.” Whether these qualities operate on a conscious or an allegorical level, or whether they percolate through to viewers at all, the color choices add to the visual contrast between the appearance of open space and the illusion of heavy, massive bodies to produce an overall effect that exemplifies the popular meaning of “graphic.” Within this context, a richly inventive array of decorative details — laces, fringe, stockings, garters, gloves, brassieres and their absence, jewelry, roller skates, eyeglasses, braids, helmets, beads, tattoos — combine with fully realized, individual features assembled out of the faces of women Martinez has known or glimpsed, and who have impressed her in one way or another, to create something like the fully-rounded characters found in literature. In a further act of necessary honesty, she makes them gnarly, lumpy, and aged: beautiful in a spiritual way, perhaps, but definitely not cosmetically. If they were easier to look at they might be easier to admire, but it would be for the wrong reason and a waste of paint. 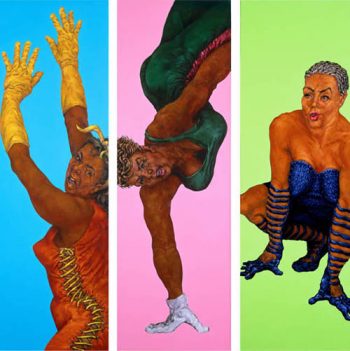 Finally, there are the poses and actions they appear to undertake. The lack of setting or context works both for and against these warriors. It works for them in that their efforts can be imaginatively projected into any scene the viewer wishes. What works against them is the absence of any particular crisis or enemy to attack or defend against. Anyone who has ever taken on a bureaucratic opponent can sympathize with the difficulty of resisting situational adversity. But what makes them heroic is their universally active poses. These women may not be sure whom they are going to be dealing with, but they are fully engaged. In the adolescent patois of our movies and television, they are locked and they are loaded. They stand (sit, crouch, leap) ready for whatever comes.

If their audience’s readiness to accept representation gives local artists an advantage, it comes with a price. In an era of unprecedented openness to representation of minorities and disadvantaged peoples, many Utah artists continue to focus on the stories of those who, while they were historically beset by adversity, are now the dominant culture and have been for over a century. It remains to be seen if this audience can shift its focus away from self-comforting and self-celebrating subjects and toward participation in the wider interests of an increasingly globalized art marketplace. One good indicator may be the reception the Mujeres de Colores of V. Kim Martinez receive. Partaking as they do of the attributes of modern, global, all-but universally popular culture, yet grounded as they are in an older, more specific cultural experience, their acceptance or rejection may tell us a lot about whether Utah’s taste is ready to evolve in order to capitalize on its strengths. 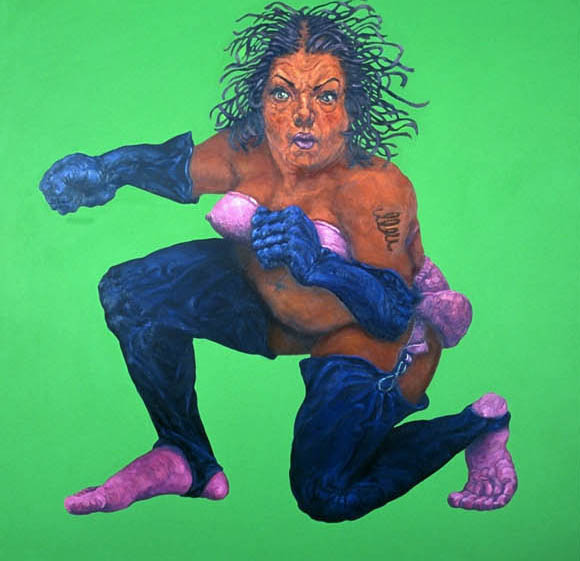