Finally, A Sense of Place 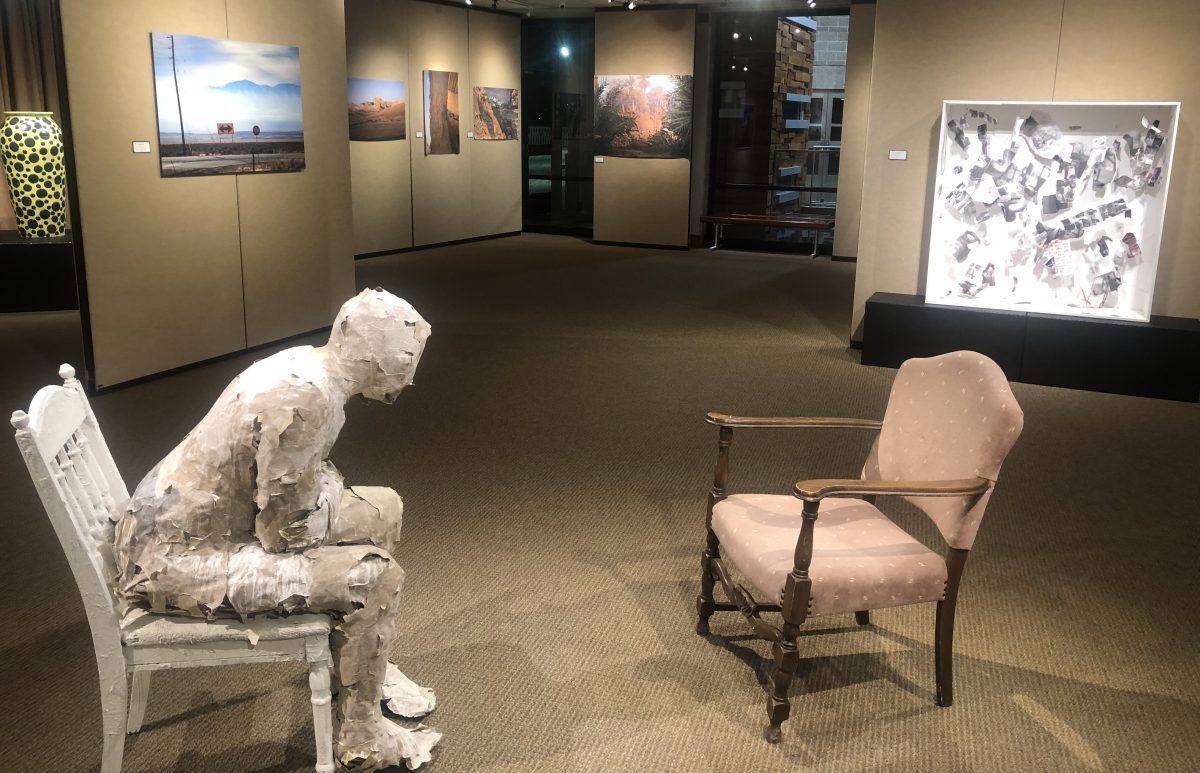 Installation view of “Sense of Place” at Utah Cultural Celebration Center with Bryce Billings’ “Unworthy, the miracle of shame” in the foreground (photo by Geoff Wichert)

If the word “pandemic” is spoken, it may bring many things to mind, like fear, anxiety, isolation, frustration, even shame: stories of mortality, the loss of several years of life, and the setbacks that may make that loss permanent. All these elements are on display right now at the Utah Cultural Celebration Center, all parts of the long-delayed final exhibition of a UMFA and Marriott Library collaboratively-funded class project. Sense of Place samples the work of eight graduate art students and their professor, who pledged to spend a term researching in the museum’s and the library’s archives and produce art based on what they found.

It’s the professor who is expected to lead by example, and Alison ‘Al’ Denyer, one of Utah’s busiest and most visible artists, deftly showed the way. Her research into the local topography led her to Howard Stansbury, who was placed in charge of an Army Corps of Topographical Engineers team charged with the first complete survey of Great Salt Lake and its environs, within five years after the Mormon settlement of the area. It was Stansbury’s report that identified the Lake as the remains of a giant inland sea, now called Lake Bonneville. Many of the familiar local features were named at this time, some after Stansbury and his officers. 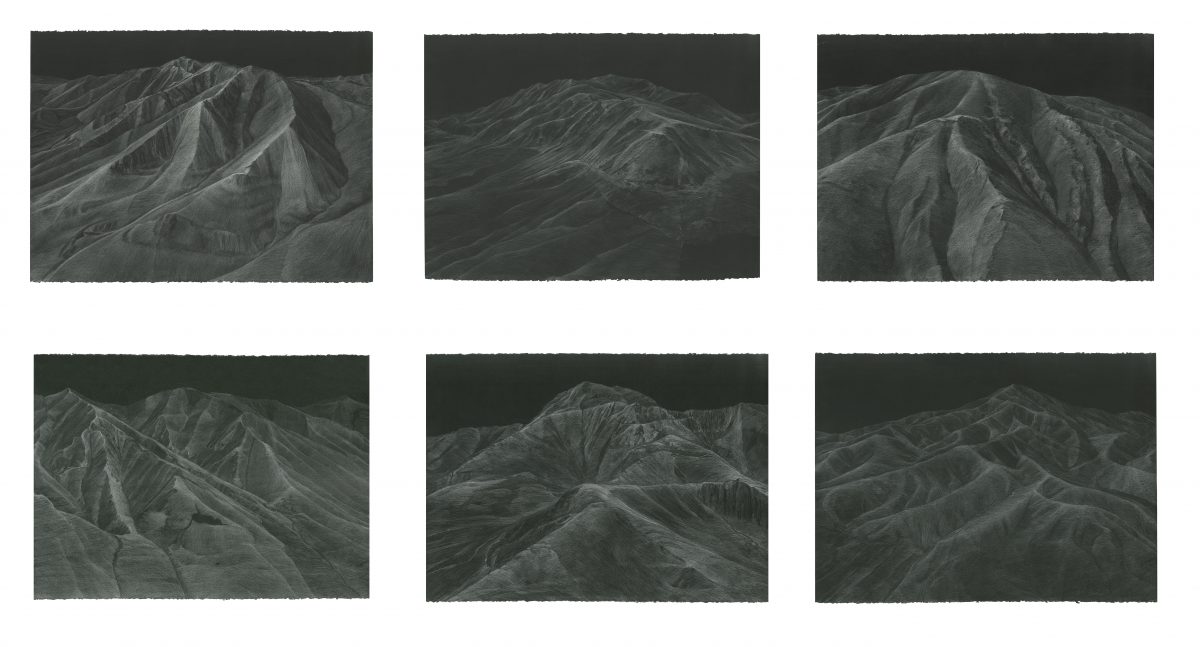 The survey technique they employed for the first time in history, triangulation, thereafter became the standard for locating and measuring features and is still used, though satellites have replaced mountains for most applications. The Corps was forced to carry huge timbers to their mountain tops for sighting, and because it’s not possible, with so many mountains in the area, to triangulate every spot from three positions, they needed six of them to complete the task. The chosen prominences were drawn by the cartographers, and their meticulous work, published in a small volume that Denyer found, were reimagined and drawn by her in large-format, using white charcoal on black paper. While this may sound like a simple inversion, it is anything but. A white support, be it paper or canvas, augmented frequently by lead or titanium dioxide, provides a luminously ground that reflects light back through the paint. Such an image will look largely the same regardless of ambient light. But a black support absorbs available light, so that only the medium will be visible, essentially floating independently in space, dependent on the light that strikes it to become visible. When pandemic-related closures prevented the originally planned final class exhibit, Denyer’s pieces were shown elsewhere, without adequate light, which left them looking rather vague in the dark. Here at UCCC, exhibitions director Michael Christensen worked closely with Denyer to provide the precise light needed to reveal her oft-praised, extraordinarily detailed and completely controlled drawing. Seen here for the first time, the result reveals the surface forms and textures of these six mountains and gives one the compelling tactile as well as visual feeling of seeing the truth about mountains for the first time.

Since the class they were taking was intended to round out their post-graduate work in anticipation of the Master of Fine Arts degree, the delay gave several of the students opportunities to show parts of their research responses in their thesis shows, which were held in the Alvin Gittins Gallery at the U under suitable restrictions. Hannah Nielsen, for example, filled the space with an installation titled “growing pains,” which included the typical dwelling of an imaginary student: bed, table and chairs, and incidental furniture. Even without Covid, life is complicated enough for a young adult who has graduated from high school and, rather than (or in addition to) getting married and starting a family, chooses to submit one more time to academic authority; who ends up vacillating before taking steps to emerge fully into life. Hannah Nielsen presented this as a kind of frozen metamorphosis, perhaps most clearly in a bedspread that seemed to absorb her subject into a quilt pattern in which she’s lost and found. Three parts of that installation are included at UCCC, where their truly experimental presence is on view. As Prof. Denyer recalled, realistic painting and environmental textiles have never really become partners, but these works meld them together well. Their loose, atmospheric blue fields are densely three-dimensional at the top, the parts overhanging the figures. Heavy stitching physically joins the painting to the backdrop, while separating it visually, but painted lines that emerge from the figures cross over this boundary and become a universe of sewn patterns. A possible reading compares the overall effect to a chrysalis, the figure, tucked high into metaphorical foliage, with the fate, the eventual fluttering path to be flown by the hatched-out butterfly, or moth, taken by gravity into a more mundane space. In this fabric context, the painted figures fit surprisingly well. 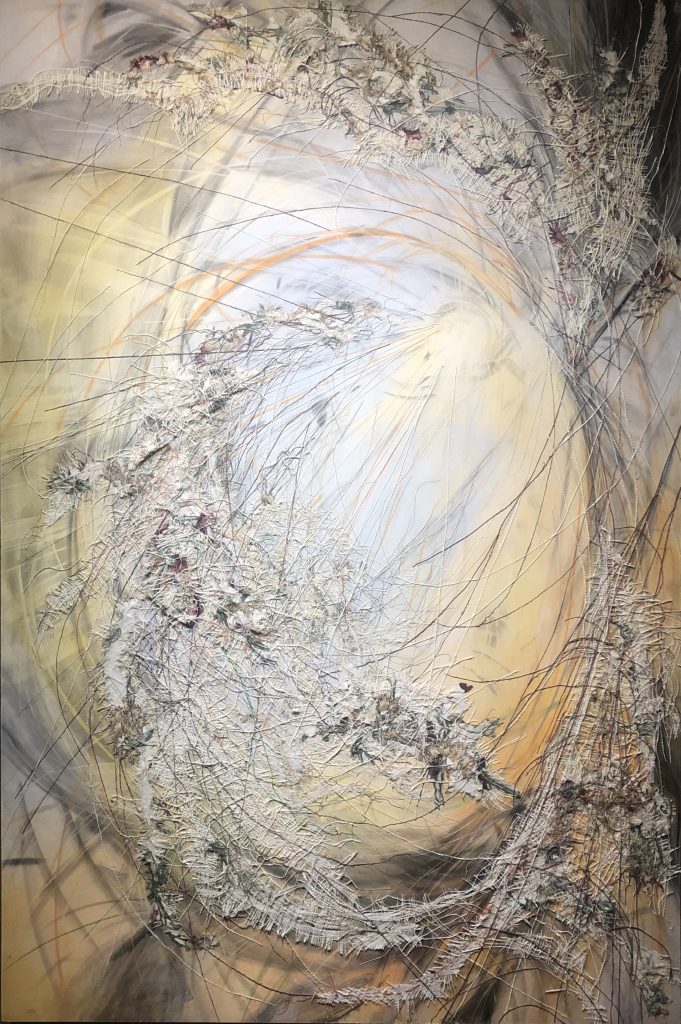 It’s not impossible that Hannah Nielsen’s success combining painting with fiber had something to do with Holly Parson Nielsen’s “Woven Women,” which boldly greets anyone entering the gallery. Known for energetic and light-filled, swirling abstraction done in very-much-mixed media, as well as a range of representational illustrations, including books, Holly Nielsen has focused in the past on motherhood and her experience with a premature birth in works that resemble this one, but “Woven Women” is a literally titled abstraction, in which acrylics and gesso adhere expressive structures of various fabrics, including dental floss, into a cornucopia from which light seems to explode as if on the first day of Creation. The woven bits, the women of the title, suggest one or more philosophical propositions about their relation to it, including roles as mothers who also suffer, nurses, survivors, record keepers, and through it all, unseen and unregarded, yet equal participants.

This might be a good time to recall that no matter how much of her own experience an artist uses in it, art is not autobiography. Actors are not the character they play, nor are artists inseparable from the portraits they create, even when they use themselves as models. The students whose work comprises this show are sophisticated adults who have earned terminal degrees at the U of U, not the fragile youths they may once have been and choose to recall in a more universal form. Further examples are shown by Bryce Billings, whose oil painting, “The View of the Fourth Wall,” employs a theater arts term for the imaginary partition that the actors in a play observe, while the audience sees right through it. By showing a self-portrait in progress in his studio, he reveals that it’s just another object among his many possessions: something he owns and not something that owns him. At the same time, nearby, his sculptural installation, “Unworthy, the miracle of shame,” represents what will presumably be a traumatic memory for far too many viewers: being interviewed by a powerful, older man who does not respect a vulnerable youth’s boundaries.

Sometimes, of course, an accomplished professional returns to school to further explore her field. Reilly Jensen is the Museum Field Services Coordinator at the Utah Division of Arts and Museums and an important archeologist in a state rich in as yet undiscovered artifacts that are too often prone to exploitation rather than exploration. It’s an absolute truth of her field that cameras are not the best way to capture the often subtle clues and distinctions that must, instead, be made by the eye. Research reported by those who locate and sometimes dig up the past always include crucial drawings, such as ones she has made of baskets of personal objects that a photograph would not do anywhere near as good a job of presenting. Curiously, her contributions to this show are photographs, but by so being they make a point. This is a show about place, and a found object, no matter how precious to its prior owner or to the scientist who finds it, is only a detail in the place where it is found. Jensen’s photos, one an overhead drone shot of a dig, another of a rugged mountain backdrop behind a desert scene revealing evidence of former land use, reveal the places where she works and tell us something about the former occupants their tools alone cannot.

Eric Robertson’s grand scale landscape photographs do something similar for our own times. The Kennecott Smelter or a community perched on the edge of a precipice are things their neighbors may see daily, yet if they were to disappear tomorrow most folks would struggle to recall them with any precision, especially if they were hard to see accurately to begin with. By using a variety of high-tech processes, like stitching together drone photos with a computer, Roberton shows his audience a place they may live in or pass through but never truly see. 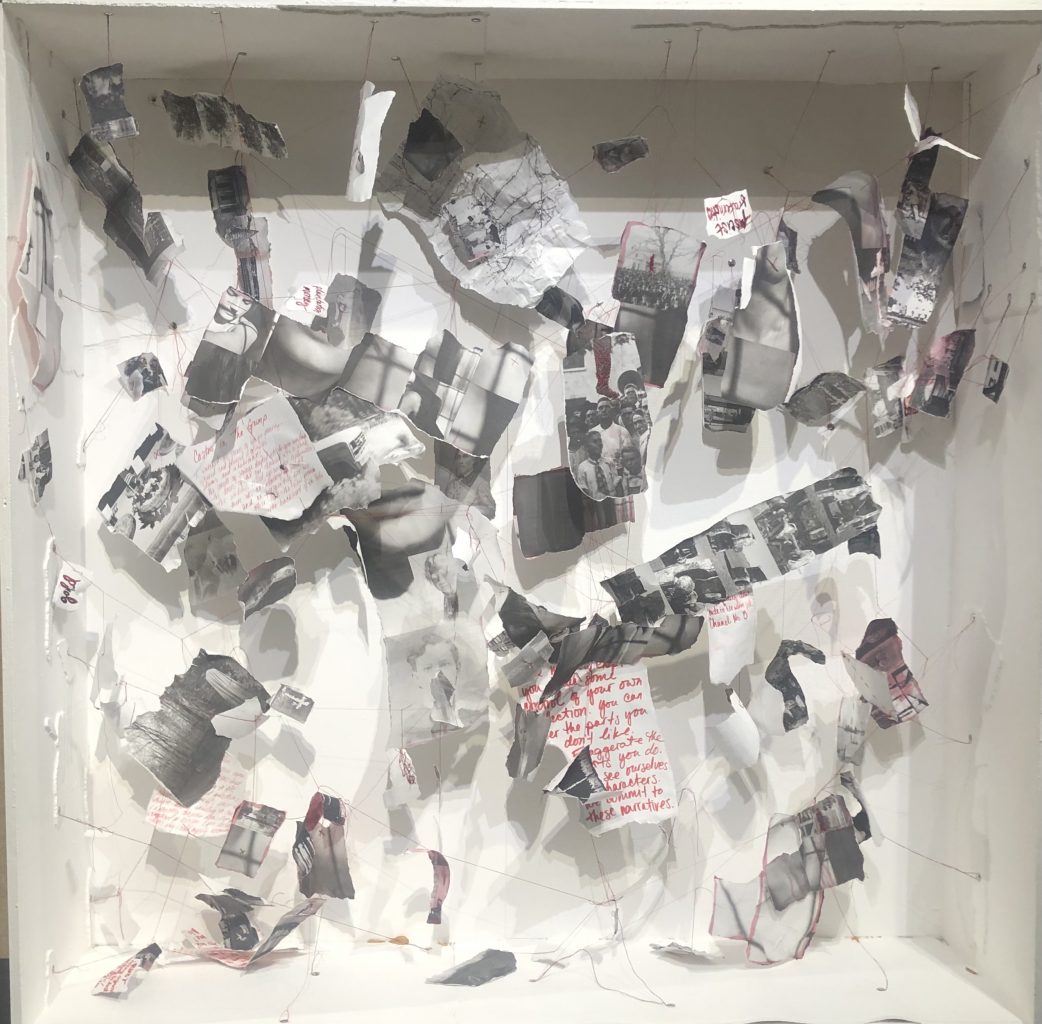 Candace Von Hoffman tells stories, often set in locations she creates using existing places, like a cemetery, that she adjusts for her purposes. She apparently looks at art from a similar point of view. “You can cover the parts you don’t like. Exaggerate the parts you do … we commit to these narratives.” These are words that can be made out scrawled on a fragment of paper in her “Shadow Box,” a crate in which are suspended picture shards that hang in the air as they might have frozen in the act of being blown by a whirlwind. We should think of them as the fragments of memory, like so much broken pottery, from which a storyteller — like an artist — might piece together a credible narrative tale.

Christina Riccio tells another kind of story, sculpted in clay into comedic form, often in a series with a title like “Moody Moment,” “The 8 Stages of Depression,” and “Labor Rights Series.” In the latter, ceramic versions of common hand tools are labeled with scrawls that proffer undying truths, like “UNSKILLED LABOR IS A MYTH.” Research with this class seems to have put her in a more serious, but no less creative mood. Her “Obsessive Tendencies #1” explores, among other things, how tall a pot she can successfully turn on a wheel and how many explanations can be found for what resemble polkadots on its surface. Given the Covid context, an urn was suggested. Its being so close to human in proportions led to some figurative ideas. Then given the emphasis some artists placed on isolation and exposure, eyes was another suggestion. It would be a mistake to dismiss it as commonplace or derivative: despite its familiar shape and decoration, and the possibility that those component parts turned up in Riccio’s research, it’s quite possible that it’s the only time all its elements have come together in a single object. 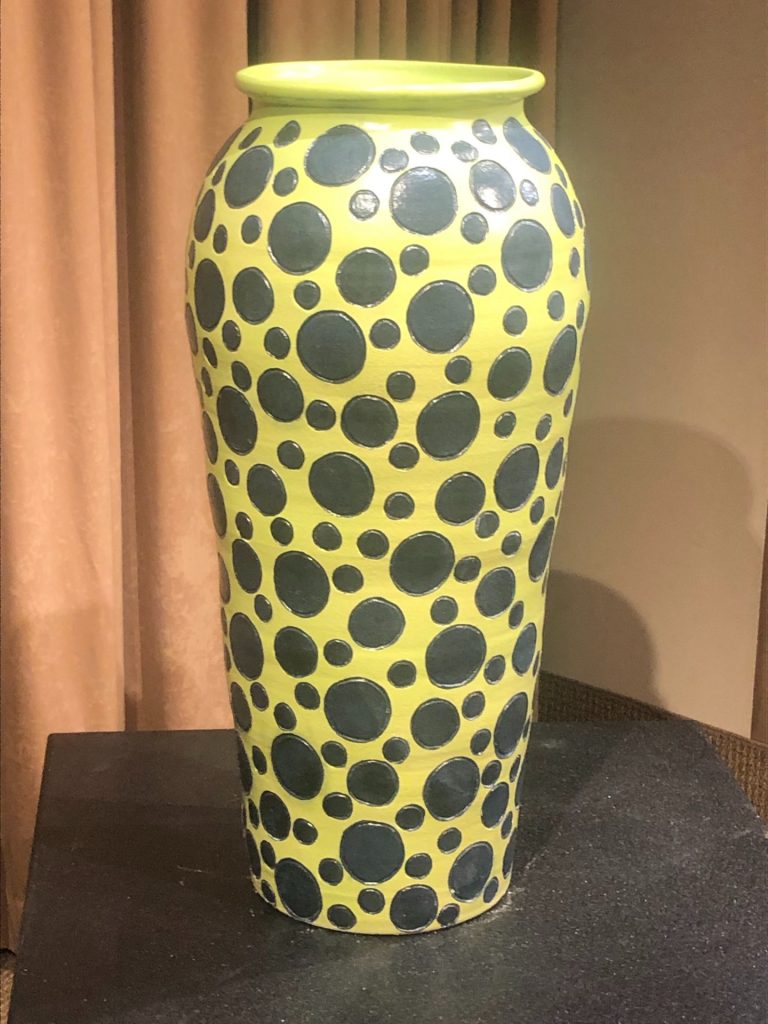 And that, of course, is the genius — the guiding spirit — that brought these artists together and created this unique collection of artworks. The vast and invaluable holdings of the UMFA and the Marriott Library contain a universe of suggestions they wait to whisper into the willing ears of inventors of all sorts. At what was presumably a late stage in their studies, these students found some new things which led them in original directions for what will become their next stages. 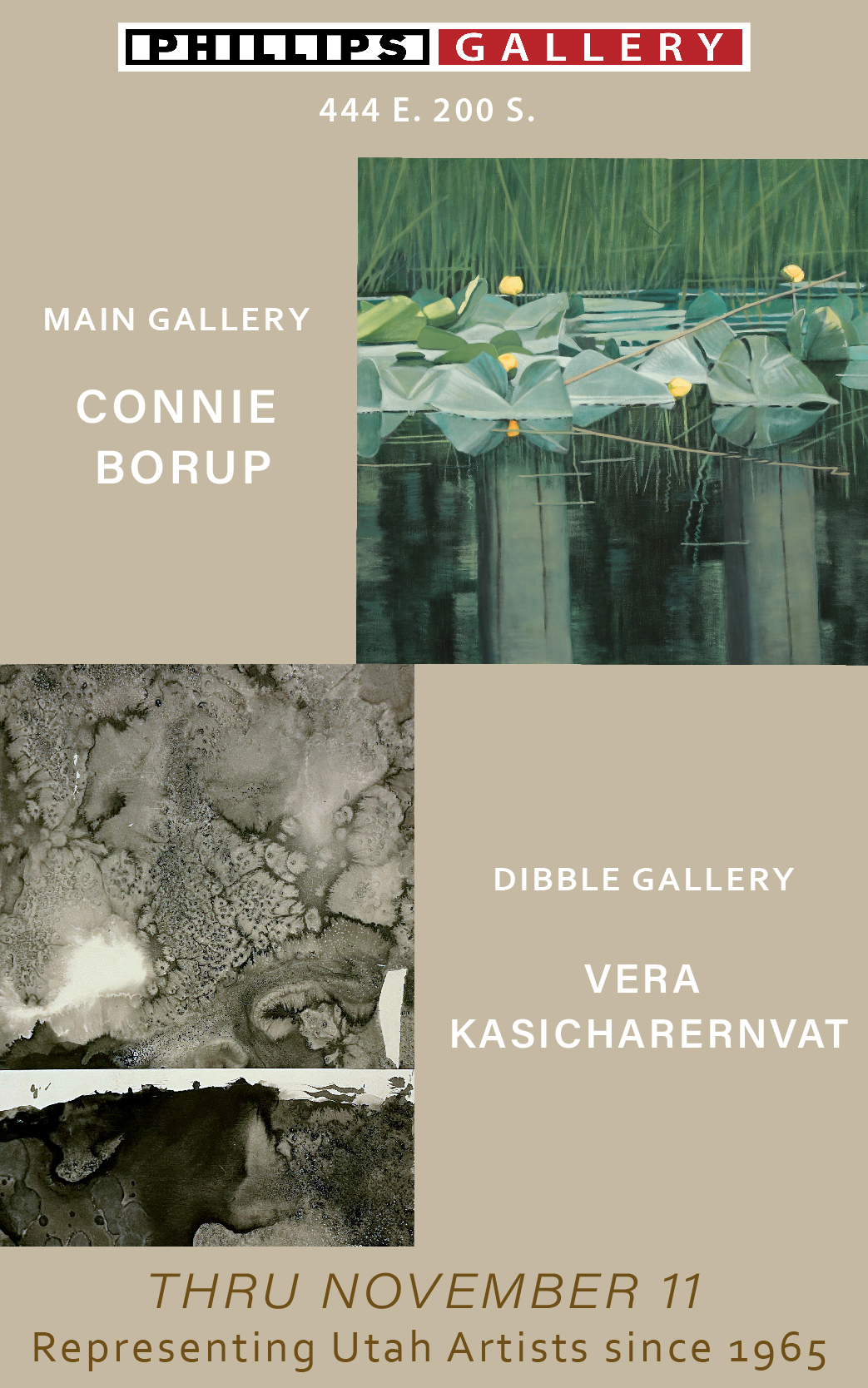