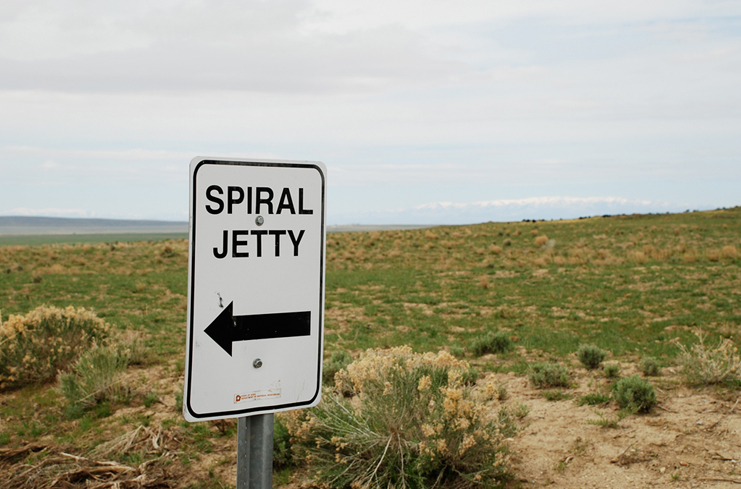 Time. The cycle of seasons, the rise and fall of water, the absence and presence of light, the space of time. Filmmaker James Benning’s 2007 film, casting a glance, is about time. More specifically, it is about how Robert Smithson’s earthwork, Spiral Jetty (1970) marks time in the shallow waters of Great Salt Lake. Time, of course, is one of the media that Smithson incorporated into his earthwork. He situated his 1,500 foot coil into a landscape with time written all over it: the nearby hills and mountains at the north end of the lake are etched with ancient gouges and lines marking Lake Bonneville’s descent; the basalt rocks are Tertiary period reminders of volcanic activity in the region. Even the pelicans that fly over Rozel Point — on their way from Gunnison Island to Bear River Migratory Bird Refuge — appear prehistoric. Daily, weekly, monthly, the lake’s water rises and falls; salt accumulates and washes away; the water changes color; the atmosphere alters from calm to storm and back again.

Smithson’s film Spiral Jetty (1970), shot in part while creating the earthwork, reinforces the element of time. It took time to make the earthwork, shown to us in a format that takes a discrete amount of time to watch. Spiral Jetty was one of the first films created as a work of art, about a work of art. The time span from filming to viewing was short, from the earthwork’s creation in the spring of 1970 to the film’s viewing at the Museum of Modern Art in the fall. Yet its impact is still palpable, notably in Benning’s artistic tribute to the earthwork made decades later.

Benning’s film runs approximately 80 minutes, a 16mm film compilation of footage he shot of Spiral Jetty between 2005 and 2007. These years marked the end of the seven year drought cycle that laid claim to much of the West, leaving the Spiral Jetty visible for long periods. Over the span of sixteen visits, Benning trained his camera on the earthwork, picking up variance and time in a work that, surprisingly, given the dynamic nature of the lake, has maintained its visual and structural integrity.

It seems important to state that, as I write this blog, I have yet to see Benning’s film. It was shown at the Sundance Film Festival in 2008 after having premiered the year before at Documenta 12 in Kassel, Germany. Mike Plante, writing on the film for Sundance, stated it was Benning’s “most hypnotic” film. Benning’s previous work documenting aspects of Utah and the West include the railroad in RR (2007), Great Salt Lake in 13 Lakes (2004), and Benning’s “read” of Utah’s history through New York Times articles in Deseret (1995). Our landscape appears time and again, storied through research and Benning’s visceral connection to industry, art, and environment.

For today’s screening of casting a glance at the University of Utah, I anticipate a visual feast of color and sound, a history of the Spiral Jetty filmed over the course of a year and a half that delves much deeper into the earthwork’s existence as its history unfolds and is retold from 1970 to 2007. Robert Smithson wrote in 1968 that “a great artist can make art simply by casting a glance.” James Benning shares his glance of Utah’s iconic earthwork in a film that, through time, continues to resonate.

James Benning will be on the University of Utah campus Monday, April 15, 7pm to present two of his acclaimed films. two cabins, a film that explores utopian and dystopian versions of social isolation through the replicas Benning built of Henry David Thoreau’s and Ted Kaczynski’s iconic cabins, will screen at 2:15 pm at the Utah Museum of Fine Arts and casting a glace will screen at 7pm in the University of Utah’s Film and Media Arts Auditorium. The films are presented as a collaboration of the Film and Media Arts Department (University of Utah), Utah Museum of Fine Arts (University of Utah), Dia Art Foundation, and the Great Salt Lake Institute (Westminster College).