Father, Son, and the End of the Road: Kirk Millson’s 9,000 Miles of Fatherhood, A True Story 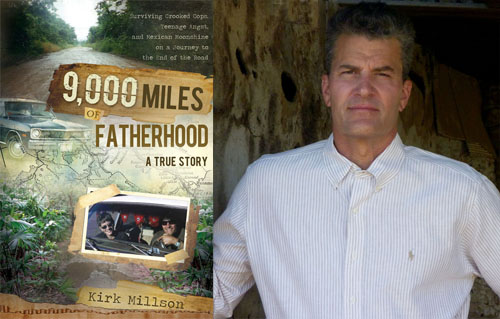 For a father, raising a son is fraught with missteps and reversals, aggravation and joy. I can say this with confidence having raised a couple of sons of my own and still working on a third. The hardest part is finding ways to relate. I’ve tried all the old standbys on this account with varying degrees of success. Kirk Millson, local Utah author and newspaper man, took an altogether fresh approach with his own son and wrote a memoir about it titled 9,000 Miles of Fatherhood.

Millson gassed up a thirty-year old Dodge Dart and loaded it to the headrests with dubious provisions and set off with his thirteen-year old son, Peter, on a 9,000 mile odyssey. Just the two of them. And the open road. And a ridiculously tight budget. And shaky Spanish language skills. And a goal, that no matter the setbacks and dangers, would be realized.

Roll down the Dart’s driver’s side window and throw in a pretty severe case of midlife crisis with the pimply, simpering hormones of an awkward teenager in a six-foot frame bent on his first scuba lesson and roll that window back up. Now drive south into ever hotter regions, and it’s like the fabled frog in the pot of water over low heat.

In 2002, Millson is forced to take a demotion from his position at a Salt Lake City newspaper. To assuage his wounded ego he negotiates a sabbatical and quickly concocts a four-month-long road trip to the terminus at the edge of the Darién Gap on the Isthmus of Panama. Instead of leaving his wife behind alone with their two children, he bargains and takes their son Peter along. Millson envisions a bonding opportunity that his long hours and attention to the job have robbed him of in recent years. He reminisces of a similar trip he and his buddies took in their college days, a trip that was a high watermark, and he feels some of that joy early on as he navigates the Dodge Dart out of their neighborhood and starts their journey south: “I was drunk on that wild brand of freedom known only by inmates who have made it over the wall.”

By the time they reach the north end of Nephi, at best only 100 miles ticked off of the odometer, the joy dissipates as quickly as the gas gauge drops toward empty in the overloaded car.

The reality of what Millson has gotten himself into surfaces after only a half-day’s drive into Mexico. “I was an unemployed, middle-aged man in a beater car with a kid I didn’t know how to relate to, and the road ahead, so recently shimmering with promise, just seemed long.” The book is written with lush description of the landscape and its inhabitants; in contrast, Millson’s dialogue is spare and fitting for the circumstances:

Peter hadn’t always been so withdrawn. He used to chatter non-stop on our many camping trips, which started when I stuffed the little two-year-old into the top of my backpack and hiked into Utah’s canyon country. He was also fearless then, nothing like the timid oddball who ducked behind me at the sight of Mexican strangers. … Of course, we hadn’t been camping in years. And come to think of it, we hadn’t really had what could be described as a conversation in…sheesh, I couldn’t remember.

“What?” Peter yelled above the wind.

“One second.” I wasn’t ready because I hadn’t thought about how to start. I searched the car for inspiration before settling on the one thing that no thirteen-year-old boy in his right mind would ever feel like talking about: a worn paperback version of Jonathan Livingston Seagull that his English teacher had sent along. I got what I had coming.

A restaurant mercifully appeared on the roadside, and I wheeled into the sandy parking lot.

Thinking that the old-model car with the added crucifix, medallions, and Mexican regalia hanging in the windshield will help them blend in with the locals, they only stand out the more, drawing unwanted attention to themselves everywhere they go. A motel manager barges in their room after a long hot day on the road to find Millson wrapped in a towel and his son on the bed “reclined in his Scooby-Doo boxers. Beer in hand and jaw on his chest…watching two nude dwarves and A Snow White look-alike cavort on a channel that was clearly not Disney.” The manager huffs and declares that Millson owes an additional 200 pesos as a perversion tax for entertaining a boy there in his classy motel room with mirrored ceiling, naked senoritas on the curtains, and a coin-operated condom machine screwed into the nightstand.

There is throughout the book an uneasy strain between Millson and Peter. They bicker, they laugh, they endure hours of silent brooding on opposite sides of the bench seat of the car as the warm air blasts through the open windows and the Dart bounces over topes, the perversely constructed speed bumps they encounter all along their way. The skinflint father wants to see the journey through. The boy just wants to take scuba lessons in the beautiful ocean. Slowly, a new confidence begins to make over Peter as they spend an extended few weeks in a mean little Mexican town and enroll in a Spanish language class. His father convinces him to do pushups, run sprints, and perform chin-up after chin-up, hanging under the stairs of the cheap apartment they’ve rented. Peter gains muscle and confidence. He begins walking on his own in the streets rather than at his father’s heels with chin down and shoulders slumped. The boy pushes closer to manhood. Millson’s mania for the End of the Road increases.

With expenses quickly depleting the budget they abandon the Dart with an iffy fellow who agrees to look after the car for twenty dollars, and they move south on crowded, filthy buses as they leave Mexico and move into the dangers of Central America. But their adventures don’t dissipate without the Dart. Having concealed $1,000 in American fifty-dollar bills in a leaking baggie slipped into a quart of motor oil, the cash strain is stretched as no one will accept the tainted bills. A San Salvadorian cabbie suggests rum as a way to launder the dirty money, and so the father and son set off as petty grifters to all the bars they can with an “I’ll have a rum and the boy will have a Coke” scam, wherein rum is spilled on the bill intended to pay the tab. And it works, more or less, to help restore solvency to their venture.

Unaccountably as they cross into Panama they encounter a respite of kindness and tranquility and spend some extended time at a cheap beach resort where languid boredom in the tropics almost overcomes them. That is until two “fetching fräuleins” in tiny bikinis on holiday lure them with siren song and a cooler of local beer. After two days of charming enticement and innocent lessons for Peter in how to open beer bottles and blow smoke rings while his father battles the magnetic pull of close female companionship after months of separation from his wife, Millson makes a quick decision and “fled up the dirt road away from what, in [his] opinion, had been the most dangerous portion of [their] trip.”

They do make it to the End of the Road in spite of mud, checkpoint guards asking why a father would take a son into such a place, and, above all, personal doubt. They make it, and so they turn back, retracing their journey toward home. Peter’s transformation from the trip seems to mostly affect young, dreamy-eyed senoritas who seem to suddenly pop out of the side streets and markets to boldly follow him with odd, misplaced sexual-fascination. Millson, for all the hardship, seems mostly to find satisfaction in his son’s emerging maturity.

But, then, maybe that is what it’s all about. A father’s trade is to bring his son to manhood. To convey him however clumsily there. Sometimes the route needs to take a detour and explore a different path. Take a chance and drive into the unknown, a place with crooked cops, malaria, and an errant scuba instructor who takes both father and son down under the dock into the murky depths for a pittance of the usual fee. And one comes up near-death and dejected, the other comes up out of the water renewed, sea foam dripping off a pimply-chin to say, “I know dad, I know. That was the coolest ten minutes of my life.”

About the Author
Born in Maryland, Kirk Millson moved seven times through six states between ages 6 and 13. A journalism graduate from the University of Utah, he learned the nuts and bolts of writing on the job at The Salt Lake Tribune and Atlanta Journal-Constitution.  He lives in Salt Lake City with his wife, Alison. They have two grown children, Peter and Hannah.