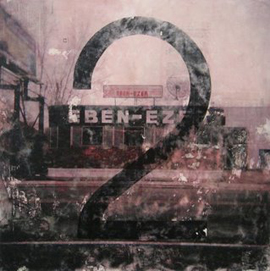 Are dreams so distinct from memories and are memories so distinct from dreams? Do we not ask ourselves, “Was that a dream?” or conversely, “Was I awake?” This month, Palmers Gallery explores the fantasy of dreams and what may or might not be fiction in memory with an exhibition of works by Monika Del Bosque and Justin Wheatley.Del Bosque depicts dream-states while Wheatley explores memory, but both artists bear traits that are fundamentally similar, and uncanny in their approach to what might be relegated to the realms of dream and the uncertain objectivity of memory.Del Bosque’s colors are fundamentally quixotic, her iconographic form loosely applied, and her canvases are entirely “dream-like.” There is nothing in her work that bears any trace of waking reality. Like a dream, one thought blends into an idea, which blends into a form. Like dreams these pieces are collages. The elements are connected by line and shape.

Wheatley’s striking and intense canvases are more structured, more classically ordered. They are darker and more recognizable as physical entities — such as the store front in “Eben-Ezer” — but like Del Bosque’s works they are layered in collage, symbol and pattern. They evoke memories, but also question what exactly a memory is. All sense of a “simple memory” is eradicated as Wheatley’s canvases are less about the central icon than that which convolutes it, betrays it.

Both of these artists’ bodies of works evoke a sense of what goes on behind the closed eyelid, the fantasy and fiction of memory and dream; ultimatley they leave one with an uncomfortable sensation and questioning of past, present and future.