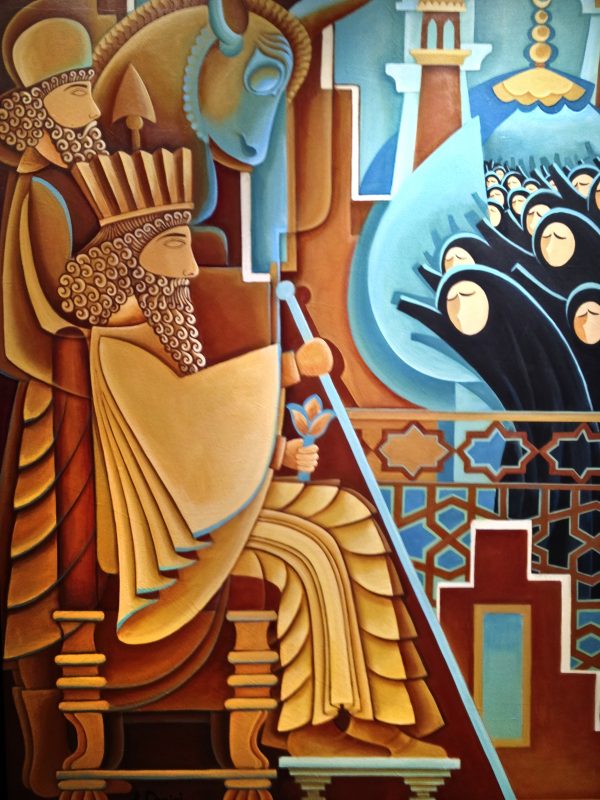 In Fahimeh Amiri’s “Reaching for Liberty,” Darius the Great, ruler of the Achaemenid Empire, is seated on his throne in Persepolis, the center of Persian power. He is represented in monumental scale, in the abstracted two-dimensional side view profile of much of the art of the ancient Near East, rendered not with illusionistic depth, but with a flattened geometric style that emphasizes his presence and stature. Above Darius is the personification of a god in the form of a bull. An attendant with a spear stands behind Darius with similarly imposing features. On the other side of this is a throng of women. But these are not the women of Darius’ day, a time of “freedom and power” for Persian women. Draped in black, they are the women of today’s Iran, reaching, the artist says, “to the ancient king to claim a freedom that once existed.” Unlike the abstracted traditional representation of Darius, these figures recede into a depth of space in the style of illusion synonymous with the new world. The blue face of Mithras, the bull-God, looks down on them, as if he is aware of and compassionate with their plight.Amiri’s current exhibit at Salt Lake’s Finch Lane Gallery features a number of similar works, inspired visually by the artist’s rigorous training in Persian miniature and a penchant for 20th-century cubism, and thematically by the struggles of women in her native country. One need only acquaint oneself with the historical subject to be completely at home with these approachable paintings and explore the wealth of symbolism and meaning embedded in these works of rich color and bold graphic detailing.

Finch Lane is lined with narratives like “Reaching for Liberty,” testaments to the dynamic history and tradition of the Iranian woman that celebrate her while invoking a sense of sympathy with her challenged role in society today. The title of the canvas “Allah Akbar” signifies “God is Great” and is a narrative of Amiri’s own invention. It is similar to “Reaching for Liberty,“ abstracted and geometric with a flattened and frontal visual plane. The iconography is distinctive: a peasant woman with a white shawl wrapped around her head reaches upwards, her mouth agape, her eye one large tear. Above, on a tier of clouds, rests an angel with wings spread. Unlike in the Western tradition, where heavenly beings bear a portentous presence and bestow divine favors, this angel is immune to the call of the woman, bored even; his eyes are closed and he does not hear her call of “God is Great.” 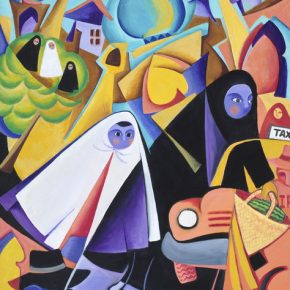 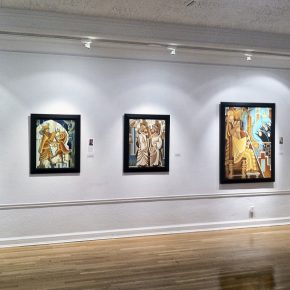 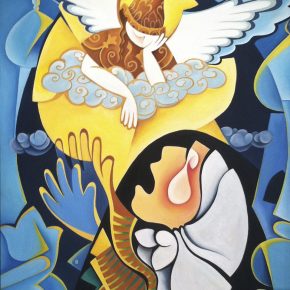 Showing concurrently with Amiri’s works are a series of mixed-media assemblages by artist Loné Vilnius. They can be meaningfully contemplative or simply witty. All, however, are masterfully rendered mixed-media sculpture.Vilnius’ “Peace?” is a contemplative assemblage that fits well with Amiri’s religiously charged paintings. It visually begs the question, “with a diversity and plurality of contrasting religions, is religious peace possible?” The names of a number of faiths and practices are placed on a placard and embedded within a carousel, which can be turned from the sides, aimlessly and without end. Above, the word “Peace,” spelled out in black with a red question mark toppled to its side, seemingly answers the question for us. 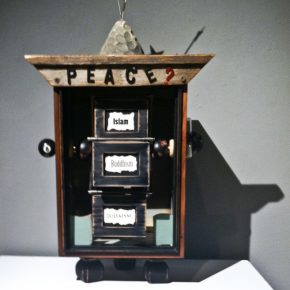 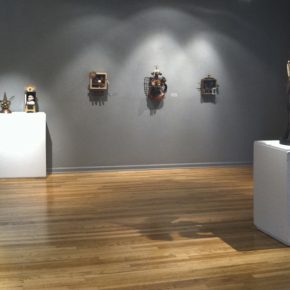 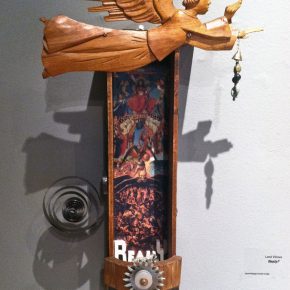 Vilnius’ religious critique is continued in “Really?” a tall box, atop which sits a carved wooden angel, the type that served in the 19th century as weather vanes. Inside the box a reproduction of Jan Van Eyck’s altarpiece “The Last Judgment,” serves as a backdrop. At the bottom sits a small lamb (a Christian symbol for Christ) and outside the box a spring mechanism suggests the gong is about to sound to herald the “end of days.” At the bottom of the box white letters, minus a question mark, spell out the work’s title, “Really?”

Polemical works like this are in the minority, however. Most of the assemblages in the show — such as “Think,” which features a baby doll’s head inside a wooden box with a piece of measuring tape — are simply witty and beautifully crafted and can be encountered and enjoyed for the sake of their broad aesthetic appeal and intrigue. 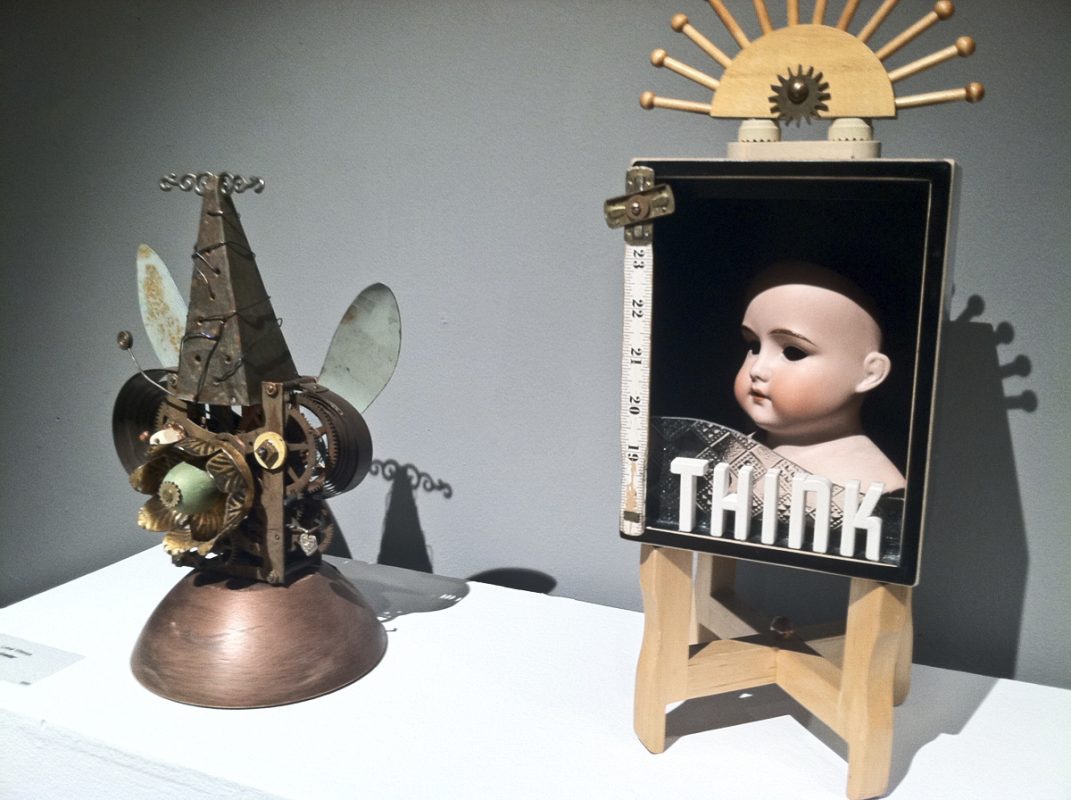 Fahimeh Amiri’s and Loné Vilnius’ work is at Finch Lane Gallery through March 2.