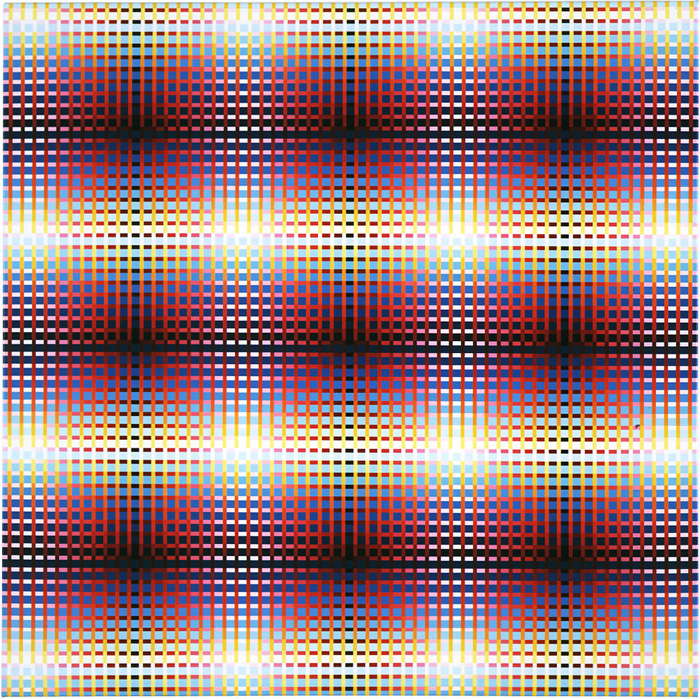 Over 20 years ago, philosopher and art critic Arthur C. Danto published his seminal essay reinterpreting the Hegelian concept of “the end of art” and introduced his notion of the “post-historical era.” Thirty years prior, another influential philosopher and shaper of aesthetic theory, Theodor Adorno, gave his own European interpretation of Hegel’s concept and suggested that “the extreme is demanded by artistic technology,” and the evolution of art would proceed along the lines of the “life process of human beings.” The Salt Lake Art Center’s new exhibition, Fab Ab, curated by Jay Heuman, explores the development of the “life process of human beings,” examining what may be considered a new era of art media, revitalizing what lies beyond “the end of art”; not only an era of new ideologies but new artistic possibility in form. In the exhibition at the Art Center, one may witness a flourishing of new approaches to an old and familiar theme.

20th century abstractionist movements — Abstract Expressionism, Post-painterly abstraction, Op art and other branches of pure abstraction — were limited to the artists’ usage of basic painterly devices used for millennia. Technological advances over the past 50 years, especially the development of acrylic paints, have provided artists with the type of new aesthetic possibilities for paint not seen since the Flemish development of oil painting in the 15th century. One may see this clearly and vividly in the works displayed now at the Art Center. Although each painting is so strikingly articulated that it may stand on its own, the exhibition as a whole becomes a testament to the power of technology in the hands of artists. These works deserve more than a passing glance, as their full vitality is discovered in the choices of each artist’s media and technique and their unique approaches to the use of acrylic. These abstract artists share some things in common with their predecessors, but the use of new materials, unavailable at the prime of the abstractionists’ movements in the 20th century, set them apart.

One might compare the work of Colin C. Smith, his multi layered “popish” compositions to an artist like Warhol 30 years before. The work of Jesse Simon and his ethereal acrylic and painted foam in graceful simplicity might be compared to Arp, whose works evoked the ease and tranquility of Simon’s, but did so with an arduous chisel. Seeing Prudencio Irazabal’s graceful panels of soft color, one might call to mind a Frankenthaler or a Lewis. Graham Peacock’s multimedia constructions are reminiscent of Rauschenberg. Works displayed by William Betts may be familiar to those who have seen paintings by Newman, as Joseph Drapell may bring to mind a Rothko. And one might be tempted to think of a Riley or a Vasserly when eying the impressive pieces of Susie Rosmarin. However, the differences separating these artists from their pioneering ancestors is prodigious. 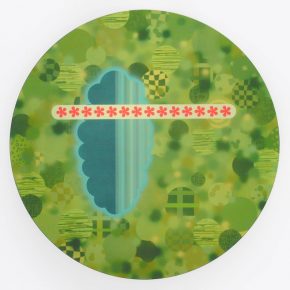 Colin C. Smith layers his canvas using pigmented resin and many coats of pattern stencils to an effect which is almost psychedelic. They are light and airy but also complex, and color is used to balance the composition. Such effects, as for example in Smith’s “Suburban Dynablob Conspiracy” (which is more precisely rendered than his title suggests) far surpass traditional screen printing methods used by those such as Warhol.

Jesse Simon uses foam-coated acrylic to create three dimensional paintings such as his “Claim.” He creates high sculptural relief, to an almost cloud-like effect, which, in their pastel coloring and inviting shapes, allow the mind to explore them. Simon is from California and these painting/sculptures are as soothing to the eye as a sunny day in Malibu. Each piece has a certain “personality,” an entity in and of itself that invites calm contemplation.

Prudencio Irazabal has achieved similar aims as the Post-Painterly Abstractionists, but one must see them head on to appreciate their full impact. Irazabal, in his “5N2” 2004, experiments with the pigment of paint, as did Frankenthaler, yet carries his project much further in his experimentation with his matt finishes and glosses. One must inspect his work closely to appreciate the glassy translucent effect that sets his work apart. The reflected light off the serenely smooth surface reacts well with his pigments and the effect is masterfully articulated and stunning to behold.

Graham Peacock, in works such as “Spiders Eyes” 2005, has the brazen, “found object” collage quality of Rauchenberg’s work, yet his paintings easily match the complexity of Rauchenberg’s more developed “combines.” These compositions are extreme, often overwhelming to look at in their psychological impact, due in part to the lucidity by which Peacock arranges his collage amid the surfaces of his hypnotic acrylic. Peacock uses his paint to harness the collage elements, layering them, and then drying and layering once more. The effect is astonishing and, like Simon, has a high degree of relief. 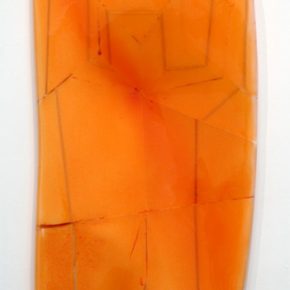 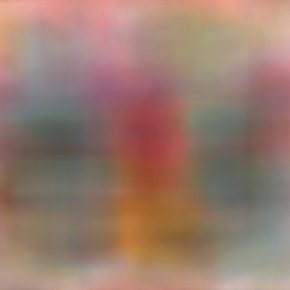 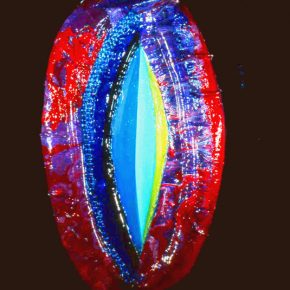 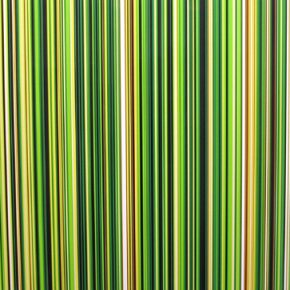 The works of William Betts may seem to be trailing in the era of Newman, yet the differences are significant. Newman used only paint to create his ground breaking “zips,” yet Betts’ work has an entirely different approach. In his “Canopy” 2000, the viewer may appreciate the technology that was utilized in these canvases. To the eye they are vivid, sharp and linear, a veritable bar code of thin verticals, all with a unity of color. Yet on learning of Betts’ technique, one finds his work is even more impressive. He has reused photographs and technically unified them via a computer, examining this motif in a way impossible to Newman.Like a Riley or a Vasserly, the neo-Op Art of Susie Rosmarin is easily categorized with the excellence in graphics that would put her at the top of the field. Yet, as in “(#312) Untitled,” Rosmarin proceeds with the Op Art past to explore new territories in graphic optics: color relationships, symmetry and illusion. Her works are highly refined and will satiate any appetite for Op Art. 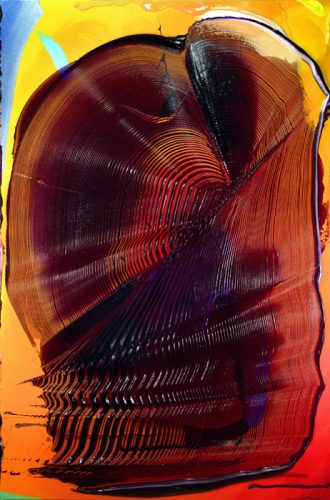 Joseph Drapell might be considered a post-modern Rothko. His work, as with a Rothko, invites contemplation, a synthesis of artist and viewer, using many layers of acrylic in contrasting hues to ignite the imagination. His “Black Magic” 2004, finds its viewers eye exploring the freedom of his painting immersed in the autonomy of his hand and the rhythm of his panels. It is a psychological invitation, like Rothko’s work 50 years previous.

No, painting is not dead. Painting is alive and flourishing, moving with “the life process of human beings.” The Fab Ab exhibition reveals this explicitly, revitalizing traditional themes in works with not only immediate gratification, but works which speak of and attest to new possibilities for painting, abstraction or otherwise. The exhibition investigates new possibilities that artists are utilizing, new technologies and advances in materials and methods by which art “after the end of art,” may be an open door to an optimistic future and innovation for art.