Evolution of a Sculptor: Jynja Calderon discovers the beauty of concrete

I don’t recall who suggested I become Jynja Calderon‘s“friend” on Facebook, but, like other suggestions or requests for would-be friends, I checked her out by going to her profile page and learning a bit about her. And, yes, I accepted the friend invitation because I was fascinated by her concrete and mosaic art.

One FB message led to another and before long I had signed up for a concrete sculpting workshop with Jynja. I wanted to make a planter for my garden. In Jynja’s home studio, high above the Capitol overlooking the Salt Lake Valle 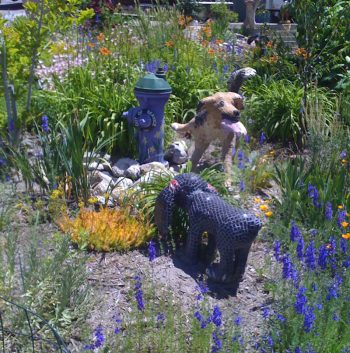 y, I spent about seven exciting, and sometimes-challenging, hours learning how to mix, pour, and carve concrete. Jynja worked on her own sculpture as I worked on mine, occasionally looking over my shoulder, making suggestions, showing me how and when to use a different tool, and cheering me on.

Though we were often in our own zones and oblivious to each other or the summer storm flashing lightning outside, we also had time to get acquainted and I asked her about her evolution as a sculptor and her dreams for the future.

From Rock Collecting to Hair Styling
Jynja believes her love of rocks and other earthen materials derives from her childhood with a father who was a metallurgical engineer. Family vacations were often spent exploring old mining sites. Jynja began collecting rocks, responding not just to the color and beauty but the feel of them.

Always interested in art, Jynja’s path into adulthood took her into hair styling. She worked in some of Salt Lake City’s most elite salons and still retains some of her longtime customers who come to the salon on the lower level of her home. Perhaps it’s her 30-year career working with the human head that inspires some of sculptures in the form of heads with nicely detailed hair. 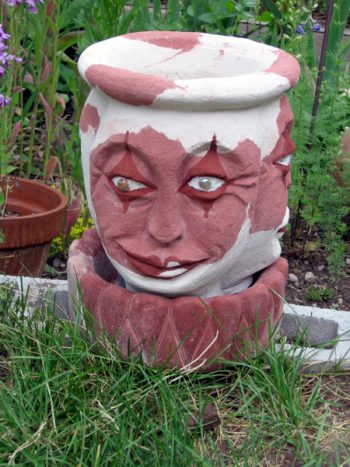 A Serendipitous Relationship
Though Jynja had also done some painting in her exploration of artistic expression, it was her life partner, a tile contractor who opened the door to mosaic and concrete work. “I went to a tile convention with him,” she explains, “and I was in awe of what I saw. I knew right then that somehow I wanted to learn that medium.”

Shortly after that, her partner went to California for a job, and finding herself with some spare time, Jynja signed up for a stone-carving workshop at Red Butte Garden. This both prepared her and whetted her appetite for further work in three dimensions.

Her partner returned from the California job with buckets of tile scraps that made Jynja’s imagination race. “Please may I play with these?” she asked, and he agreed.

Learning from Internet and the Master
Meanwhile, Jynja was browsing the Internet for anything and everything she could find about sculpture and mosaic art. She discovered wetcanvas.com and a conversation thread on “cement as a sculpture medium.” She became so excited by the information and experience shared on this site that she read the conversation all the way back to 2001. By the time she’d finished reading, she said, “I can do this!”

Through the Internet and books, Jynja also became acquainted with the work of concrete sculptor Elder Jones, whose work appears in several of the leading books on concrete sculpture. The Tennessee-based artist came to Utah last summer and conducted a workshop using Jynja’s studio. Working side-by-side with a master was inspiring and confidence-building. 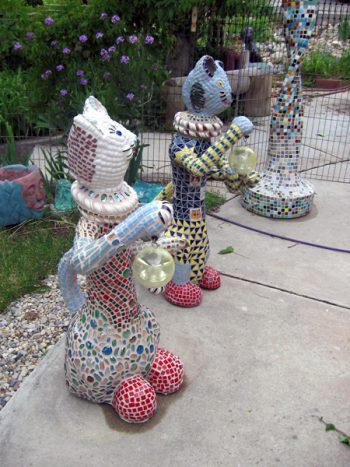 From Pet Memorials to Dinosaurs
Jynja’s garden is a sculpture gallery filled with colorful examples of her work. Her early pieces were memorials to dear departed pets, like “Butch” the dog, who, thanks to hidden plumbing, raises his leg and pees on a fire hydrant. Friends and clients have commissioned Jynja to similarly memorialize their own pets.

Last year, a client who works at the Museum of Natural History invited Jynja to contribute a sculpture to an auction to raise money for a new museum building. The museum’s theme was “DNA to Dinosaurs.”

“I researched dinosaurs on the Internet,” says Jynja, “and found the Dimetrodon, which predated dinosaurs by about 260 million years but has DNA closely related to that of humans.” She recalled having played with toy models of the Dimetrodon when she was a child and could easily imagine a Dimetrodon-shapped couch made of concrete and mosaic tiles.

She contracted the welding of a frame, then spent about three months building the couch-creature. The finished piece was auctioned for $6,500. In addition, Jynja created tall, spiral-shaped DNA strands of concrete and mosaic tile, one of which was purchased for $1,000.

Prices for her sculptures and mosaic pieces range from $200 to $15,000. You can see examples of her work on her web site.

Though Jynja loves the creatures she creates for her own and her clients’ yards, she aspires to create something monumental (think “Utah Tree” in the West Desert). She would like to see Utah set aside some land in the salt flats for a monumental sized sculpture garden, similar to one in Texas and many other places around the world. 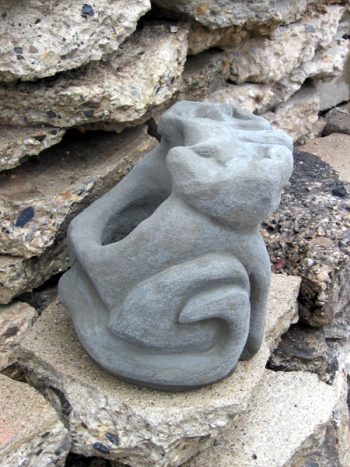 Want to Play in the Mud?
Thanks to Jynja’s instruction and encouragement, I was quite pleased with my first attempt at concrete carving. “Poo Cat,” a sculptural planter somewhat resembling a Mexican tribal artifact, graces my garden. Though scarred on his side where the sand and cement didn’t quite mix, Jynja insists, “The beauty is in the flaw.”