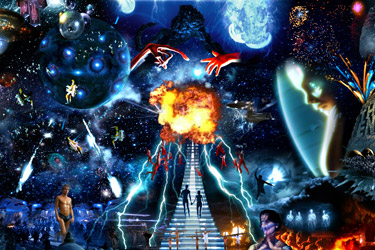 Context: from Friday, January 20 through Saturday, May 19, the Utah Museum of Contemporary Art (formerly the Salt Lake Art Center) will be presenting New Frontier 12, an extension of the Sundance Film Festival. During this time visitors will experience the best efforts of today’s video artists to overcome the passivity of too many of their contemporary viewers, in an effort to engage their audience in the kind of active viewing good art has always demanded.

One work in particular cannot wait. Here only for nine days—the duration of the Sundance Festival—Evolution (Megaplex) by Marco Brambillo distills the essential germ of modern cinematic imagination and the technology of digital 3-D to give a cinematic, parallel dimension to the feeling of universal peril created by immersion in the  24-hour news cycle. Brambillo has collaged together a seemingly infinite number of scenes from familiar apocalyptic conflicts, arranged not sequentially in time but simultaneously in space, stitching them together so that a figure in one strides across the abyss of another, while rivers flow and flaming men fall from one Hollywood extravaganza to another. In taking his audience into this phantasmagoria of colliding conflict, Brambillo has eliminated the drop-off that occurs after the imaginary breakthrough that inspired an adventure has passed, and produced a continuing collage remarkable in its veracity to the way simultaneous apocalyptic threats seem to menace those who dwell in the world of complete information.