Everyone Has a Guardian Angel in Ogden Spirituality and Religion Show 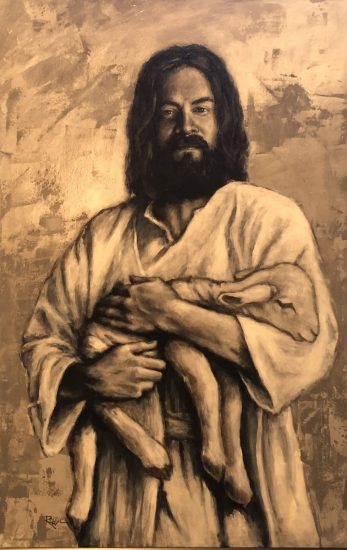 There are places in the world, some of them in the United States, where the “Religion and Spirituality” show, as it is fondly known in so many Utah galleries, would not be allowed. Once upon a time, that might have been because of institutional hostility to all religious belief. Today, it’s more likely to be intolerance of one sect for another, or for every other. So we should be thankful to live where faith is strong but toleration is even stronger. Many of the works in A Framework of Spirituality and World Religions, now showing at the Eccles Center in Ogden, express, as should be expected, their maker’s identification with the LDS faith, especially with its attributes. But about as many acknowledge some other faith, while as many celebrate the whole experience of spirituality.

An excellent place to start is with Mark Goodson’s First Place-winner, “The Lamb of God,” a work that, as the saying goes, ticks all the boxes. Although the title creature is present, zoologically correct, and showing a strong willingness to be comforted by the Shepherd, it’s clear that the compelling center of attention is that figure’s countenance. His expression perfectly captures the way we all must hope to be greeted by our creator. The overall sepia tone gives the portrait a sense of great age, but some modernistic touches, like the ambivalent treatment of the back wall, suggest the promise the paintings extends is as true today as it was in the distant time it was made. While the overall feeling is specific to Christianity, nothing about it suggests a narrow point of view. 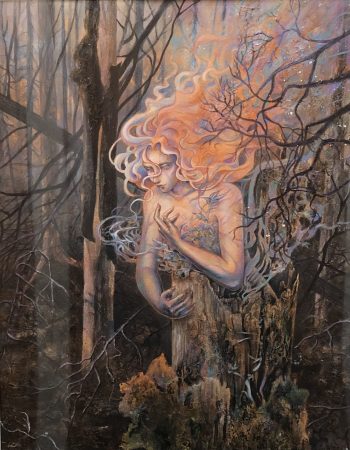 The truths of the spirit share in common a way of coming around just when they are most needed. So the relevance of McKenna Powell’s Pagan reference, in “Forest Fire: The Green Man,” to our current plight of drought and conflagration should surprise no one. The legend of the Green Man usually invokes rebirth, which makes it doubly relevant, both because of the danger of despair over lost forests, but also because of the relatively recent discovery that a well-regulated forest is made healthier by fire. Powell’s Green Man moves through the scene of disaster, caresses a burned out stump, and suggests that there are always forces behind the events that are witnessed, and their priorities may not be ours. 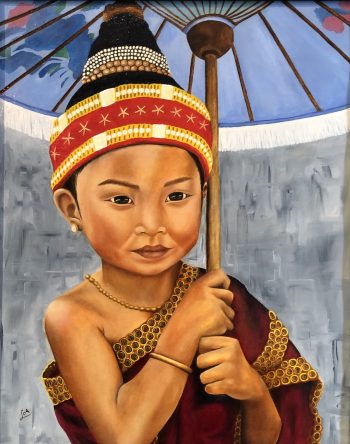 One work that reminds viewers that wisdom can come from unexpected sources is Loa Williams’ “Pchum Ben Festival,” which refers to a Cambodian celebration of the previous seven generations of ancestors. A revelatory moment in the festival comes when celebrators toss away balls of rice, a gesture meant to feed any lurking evil spirits. Everyone hopes this humane gesture will rebound to the credit of living relatives, but it seems equally applicable to the living, as well. Doing good to those who don’t seem to deserve it can lead to discoveries of both sides of the encounter. Williams’ choice to contrast the parts of the painting that represent material possessions, which she paints very loosely, with the flesh of the child, which she lavishes her skill on, makes this work worthy of the honorable mention it received. 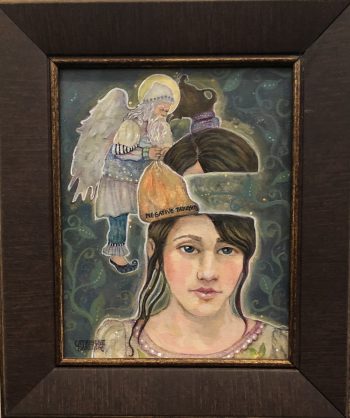 Humor is even more important in spiritual matters than in some less essential concerns: a good laugh is a godsend. Catherine Darling Hosteller’s “Taking Out the Mental Trash” makes her case with an antic presentation that uses fantasy to make the point. The winged, angel-like figure who carries the bag resembles Father Christmas, but instead of leaving gifts he is disposing of things unwanted. His dress and the appearance of the woman whose mental load is being lightened combine to suggest a Byzantine time frame, which somehow just fits.

Another piece that uses a light touch in response to a concern with which some may be wrestling is by Kara Koolmees. Her casual watercolor, really a sophisticated use of the technique, offers the reassurance that “Everyone Has a Guardian Angel,” and while the crowded Earth below warns that there might be too many sheep for the shepherd to handle, the relaxed character of the sociable angels, sitting casually in ranks above as they pass the time in idle conversation, offers a bit of reassurance that despite everything, creation is unfolding as it should. 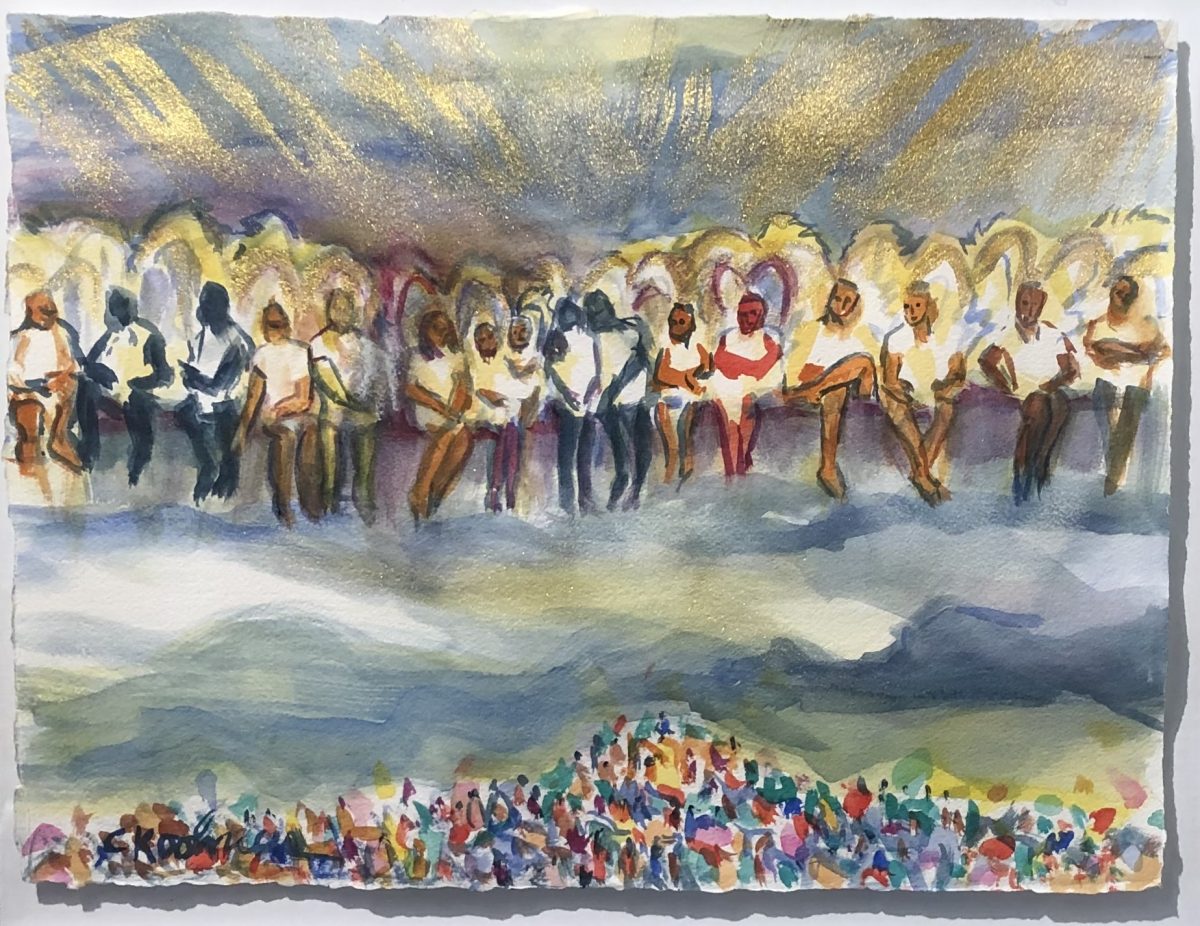 Kara Koolmees, “Everyone Has a Guardian Angel”

And then there are a number of experimental techniques in evidence. Ashley Moore’s “Living Water” combines wave-configured Plexiglas and alcohol ink to bring her image of water to life. Mac Stevenson uses wire, a glass lens cut in two, and stacked layers of painted plastic to suggest the translucence of spiritually accessible materials in “Urim and Thummin.” Particular charm attaches to “Vitae,” in which Jacquee Aird adapts the three-dimensional craft of leather working to a picture format to produce an image of a newborn elephant, who receives the gift of life from a tree spirit in the presence of its parents. All around, trees and shrubs burst into growth that spills over the frame and into the room with the viewer. Sometimes its the most naive-seeming works that speak the most eloquently.