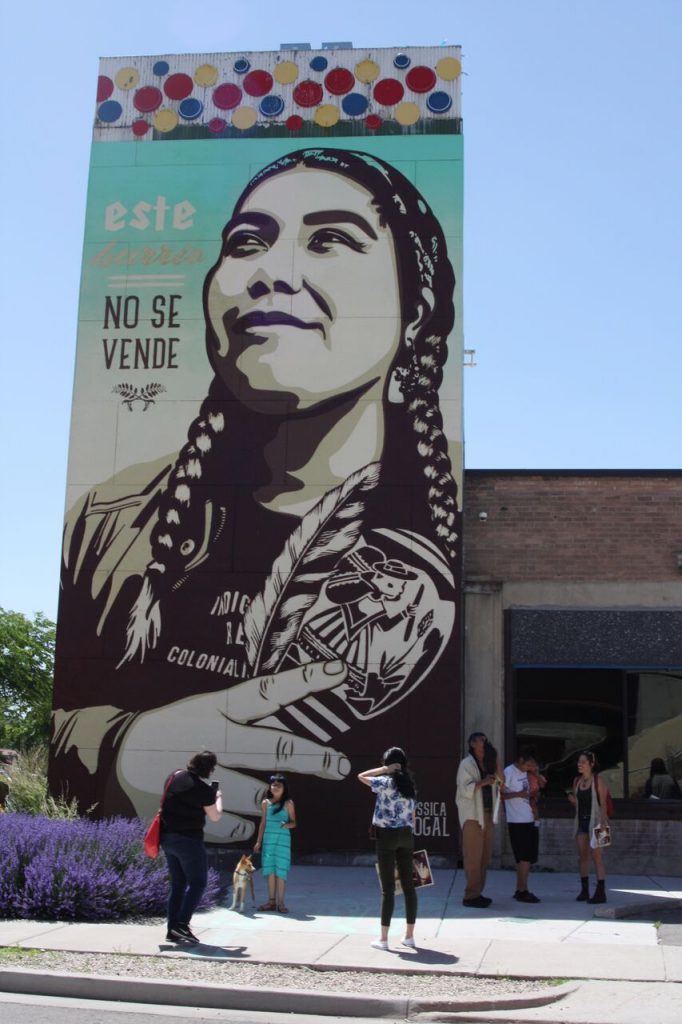 A new mural standing tall on the façade of the Furst Construction Company headquarters at 700 West and North Temple celebrates the resilience of the Salt Lake west-side community in its fight against gentrification. Created by first-generation Colombian American artist Jessica Sabogal, the mural features an image of community activist Ella Mendoza and the declaration, “Este Barrio No Se Vende” (“This Neighborhood is Not For Sale”).“It’s very intentional. We’re not for sale, you know?” says Mendoza. “We’re not leaving. This is the neighborhood that we’re fighting for and we deserve to have homes and we deserve to have good spaces.”Sabogal, a much-sought-out muralist, met Mendoza and other feminists of color when she came to Salt Lake City in March as the keynote guest for the 2018 Women’s Week event. The theme of the event was “Resilience: We are Powerful Because We Have Survived.” Listening to Mendoza speak about their experiences as an undocumented queer person in the community inspired Sabogal to create the mural.“I had never spoken to them but they created a safe space for me in a room full of white women. They made me feel safe. I thought immediately that if they made me feel safe how would it feel if Ella was on a 40-foot-tall billboard at the entrance to Rose Park?” says Sabogal.

Although a local activist and artist, Mendoza’s name, artwork and activism may not yet be known to most in the community. The 40-foot tall mural on a billboard at the entrance to the west-side community Rose Park may change that, but the image is meant to be more than just about Mendoza.

“Jessica and I talked about what it looks like to highlight the voices of people who usually don’t get highlighted. I think we usually talk about who gets to be honored—people who have done big things. But in this very big way and in this very humbling way she chose to honor something that I represent: my community—a lot of undocumented people who do belong here,” says Mendoza.

On the mural, Mendoza holds a maraca from their Peruvian homeland and an eagle feather. The maraca features an indigenous woman with a flute and a backpack, symbolizing labor — specifically showing how indigenous women have been the backbone of the workforce. The feather was a gift to Mendoza by Native American activists, symbolizing Mendoza and other indigenous people’s struggles to unite their nations and fight against pipelines, coal extraction, and the abuse of Mother Earth.

In addition to these concrete symbols, Mendoza’s body language in the mural is also significantly linked to the concept of their community. “I was asked to look out. [I was told] ‘When you look, think about what you’re looking toward.’ I thought about the future. I’m looking towards the future because we are the future, you know? People of color who are just trying to be really intentional about the way that we deserve to be here. We also deserve to have a neighborhood and to have homes and to have community. It’s a very intentional mural about what this community looks like and what real people from this community look like.”

Furst Construction Company was happy to provide a home for the mural. “Because our company headquarters is situated right at the entryway to Rose Park, I feel lucky to be in a position to provide a canvas where our community can be reflected and have a voice,” says owner Chris Furstenau.

The Office for Equity and Diversity and the Utah Museum of Fine Arts at the University of Utah held an event to unveil the mural from 2-4pm on Saturday, June 8. The event began with a circle ceremony lead by Shoshone tribal members.

“Our friends burned cedar and they opened up the space in that way which I feel is very important because we are on Shoshone land,” says Mendoza. “This is not our land. That’s the thing about murals—whatever you put up on the wall stays there. We’re trying to be respectful with whose land we’re on. Whose neighborhood we are on. How are we acting in community?”

For both Mendoza and Sabogal, the mural is about creating a conversation about how they want the community treated moving forward. This is especially relevant coming from people who have fought through and survived so much. They keep on fighting with resilience because it’s the only way they can continue to survive, grow, and keep their spaces.

For Sabogal, her murals are meant to push boundaries and represent aspects beyond aesthetic pleasure—they are political images meant to document and frame communities in danger of being exploited or pushed out; imbue communities with hope and courage to keep fighting.

Mendoza says the west-side community will keep fighting against gentrification for as long as it takes to be recognized and respected in the Salt Lake community and beyond. “When I think about the future, I hope this community can still have space to continue to grow and thrive rather than push people out. That’s what [this mural] is saying—this community is not for sale—money can buy a lot of things but it can’t buy community,” says Mendoza.

Scout Invie is studying English and art at Westminster College. She is also a writer and layout editor for Honorable Mention, Westminster Honors College’s biannual newsletter.