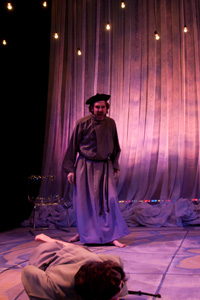 If you hear a riveting chorus of: “Brekekekex! Brekekekex! Ko-ax, ko-ax!” and you didn’t sign up for an evening of Aristophanes, you would be correct in thinking you are in store for another intelligent play from Plan-B Theatre Company.

Eric Samuelsen’s AMERIGO is a wicked mixture of “The Frogs,” 16th-century political humor, lessons in diplomacy from Niccolo Machiavelli, and lessons in humanity from a Mexican poet and playwright (who happens to be a 17th-century lesbian nun) all centering around a delightful argument between Christopher Columbus and Amerigo Vespucci about who really discovered the New World.

Oh, and this takes place in Purgatory. It keeps one on one’s mental toes, so to speak. And it’s LOL funny, except when Sor Juana Ines de la Cruz (the nun, played by the striking Deena Marie Manzanares) isn’t breaking your heart with truths about diseases (venereal and otherwise) that traveled to and from the continents, the rapes and beatings of women, mutilation and enslavement of Indians and so forth. Columbus likes to believe he was trafficking in religion, but both explorers, Sor Juana demonstrates with increasing passion, were trafficking in Commerce. Indians, for example, could be converted but not baptized because Christians could not be sold into slavery.

Anytime things become too heated, the genial Machiavelli, played ably by Kirt Bateman, breaks up the argument with another frog song.

The question of why Queen Isabella sponsored the Columbus expedition is central to one dispute. Machiavelli says it’s about power, who has it, who wields it, to what end. Columbus, played huffily by Mark Fossen, says it is all about discovery, and Amerigo, played nimbly by an always-appealing Matthew Ivan Bennett, says it is about profit. Columbus insists that he “settled the land, built forts and opened trade.” Amerigo, in one of the funniest lines in the play, replies, “I, at least, knew what land I was looking at.”

Under the direction of Jerry Rapier, the exchanges between Columbus and Amerigo are worth the price of admission. When Columbus insists that Ferdinand wouldn’t fund his voyage to Asia because his court was full of fools and sycophants, Amerigo points out that it lay thousands of miles to the west of what Columbus discovered. Ferdinand’s councilors, he says, “were better at math than you were.” Columbus maintains that he made landfall precisely where he said he would. Amerigo responds: “And you found people and you named them Indians and so they remain today. But you got it wrong all the same.”

Phillip R. Lowe’s costumes are perfect for purgatory or everyday 16th- or 17th-century wear. Randy Rasmussen’s set includes clear chairs that help expand the space and a knockout global rug that helps the characters explain their travels. Jesse Portillo’s lighting helps it all hang together: light bulbs in ever-changing colors hang from cords of varying lengths that look like talismans when unlit.

AMERIGO, one act, 90 minutes, runs through April 18 at the Rose Wagner. For tickets and more information go to www.planbtheatrecompany.org.