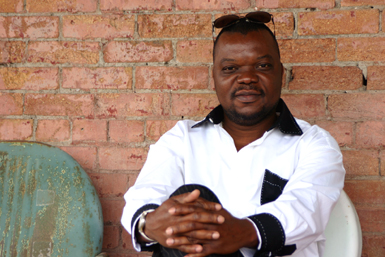 Emmanuel Makonga, whose paintings of village life in the Congo are now on view at Art Access Gallery, has lived a turbulent life. A Congolese comic book artist and political cartoonist, he knows well the struggle for democracy, has survived terror to challenge repression, has fought to conquer injustice and reached out to the world to plead for preservation of the environment. This type of activism in one of the most violent countries of Africa was not easy and led to an exile that eventually brought Makonga to the United States. His quiet and idyllic watercolors on exhibit at Art Access may seem a far cry from the political satire that took on one of the world’s bloodiest dictators, but they are still part of this artist’s interest in social concerns. Makonga, in his soft-spoken voice, conveys his faith in his country, saying that, “When people think of Africa they think of only war and disease and poverty, but we have something to give and to teach people. When you go to the village you find only peace.”Emmanuel Makonga grew up in Zaire, the name given to the former Belgian colony of the Congo (now the Democratic Republic of Congo) by its 30-year dictator, Mobutu Sese Seko. With the aid of the CIA, Mobutu came to power in 1960, two years before Makonga was born in a small Congolese village. By the time the artist was 6 his family had moved to the capital city, Kinshasa, where, in the ’70s, Mobutu fully consolidated his power and began forming the country in his own image. Children are innocent, unaware of the grand political battles happening around them, so the struggles Makonga faced growing up were much more local. Like many aspiring artists around the world he had to struggle with his parents, who wanted him to pursue a practical profession. After going to school for mechanics and also teaching, Makonga chose to explore what he had developed a love for as a very young child and, going against his parents’ wishes, began to study art.Makonga was trained in the graphic arts, and it was in this realm that he was propelled to the forefront of his country and achieved celebrity. He first came onto the national stage when, as a high school student, he designed an award-winning stamp, used in the fight against AIDS. His training had prepared him for a career painting the sides of buildings with advertising, the standard “billboard” in the Congo and its most prevalent form of marketing. His talent showed quickly and he began making money. When he purchased some expensive clothes for his mother she marveled at how much he made, saying, “Just for drawing on the wall?”

Makonga’s fame increased and he must have taken satisfaction in being able to show his parents that he had not been lost to the penurious world of art. He began drawing comic books, and appeared on television and on the radio, receiving visiting artists from France and other countries. 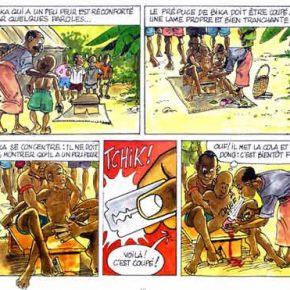 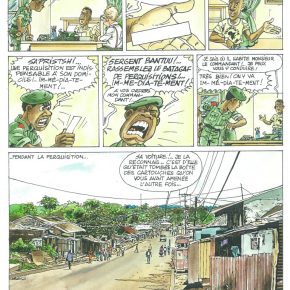 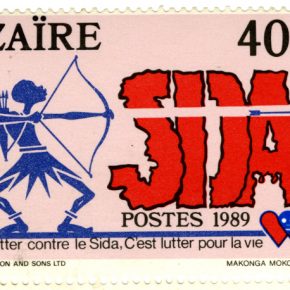 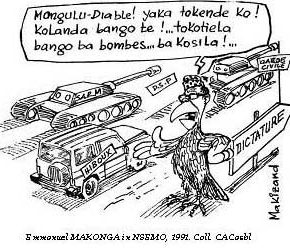 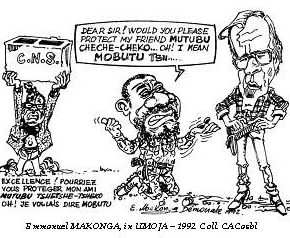 With the courage of a true artist, Makonga put all his hard-earned success at risk when he began drawing political cartoons in the late 1980s. As the Cold War waned so did U.S. support for the Mobutu regime. The world increasingly focused its attention on the violence and atrocities happening in the country, and to appease world opinion Mobutu loosened some political restrictions, including those on the press. Political satire, which had a long tradition in the Congo, resurfaced and the famished political public clamored for more and more newspapers. They wanted freedom and democracy. Makonga was among a handful of prominent cartoonists in the country and one of the first to openly satirize Mobutu. Looking back, he realizes what he was doing was dangerous – “People were still being killed,” he says – but he was young and courageous and wanted to fight for his country. His brother, who worked at the presidential offices, was worried. “He came to me and said ‘Why do you do this? Do you want us to be killed?’” His response was, “This is what I was taught to do. If it was illegal they shouldn’t teach it . . . If you don’t want me to do it then you give me your paycheck.”

Makonga was not completely insensitive to the danger he was creating for himself and his family. But he says that because the world was watching Zaire and the political discussions there, public figures like journalists were in a protected position. That didn’t mean that he didn’t have to escape and go into hiding for having spoken out against injustice, but his family was luckily left alone.

As a political cartoonist, Makonga was able to exercise that quality that makes a great artist, qualities that go deeper than paint and brush. Makonga was able to utilize his vision to generate hope for a people who had known only despair. He persuaded them that there could be an end to mass violence, solutions to the madness of the AIDS epidemic, and hope for the land. He continued drawing his cartoons at various papers and publishing his comic books until the political situation became unbearable. In 1993, while Mobutu was contending with a rival government set up by a conference of various political parties, Makonga left his homeland for Gabon, a French-speaking country on the coast west of Zaire. Because of the trouble he had in his native country Makonga wanted to quit drawing when he arrived in Gabon. But his friends and colleagues there naively assured him their country was different, that he wouldn’t have the same problems.

In Gabon, Makonga’s energies turned more and more toward larger societal and environmental issues. In 1996 the European Union published a collection of his cartoons called Les braconniers d’Afrique, which focused on the environment and is still used in classrooms for young students today. He also published a comic book exploring the life of the Bantu.

Makonga says he was relatively unmolested as a cartoonist, but when he became an editor and published his own newspaper, Le Nganga (the fortune teller), he ran into trouble with the Gabon government – which had its own long-term, corrupt president. He returned to his homeland, but what was now called the Democratic Republic of the Congo was suffering from years of Civil War and conflicts with neighboring countries, and it quickly became apparent Makonga couldn’t stay there either.

In 2002 Makonga emigrated to the United States, becoming an exile far from his native land living in a place where he didn’t speak the language. Here he had lost all of his celebrity. He wasn’t anyone to anybody. He tried to establish a career as an artist, but when he realized people were trying to take advantage of him he decided to wait until his English improved and he could better understand the system before relaunching his career here. After first living in Ohio, he came to Salt Lake City last year and that’s when he began showing his portfolio around town. 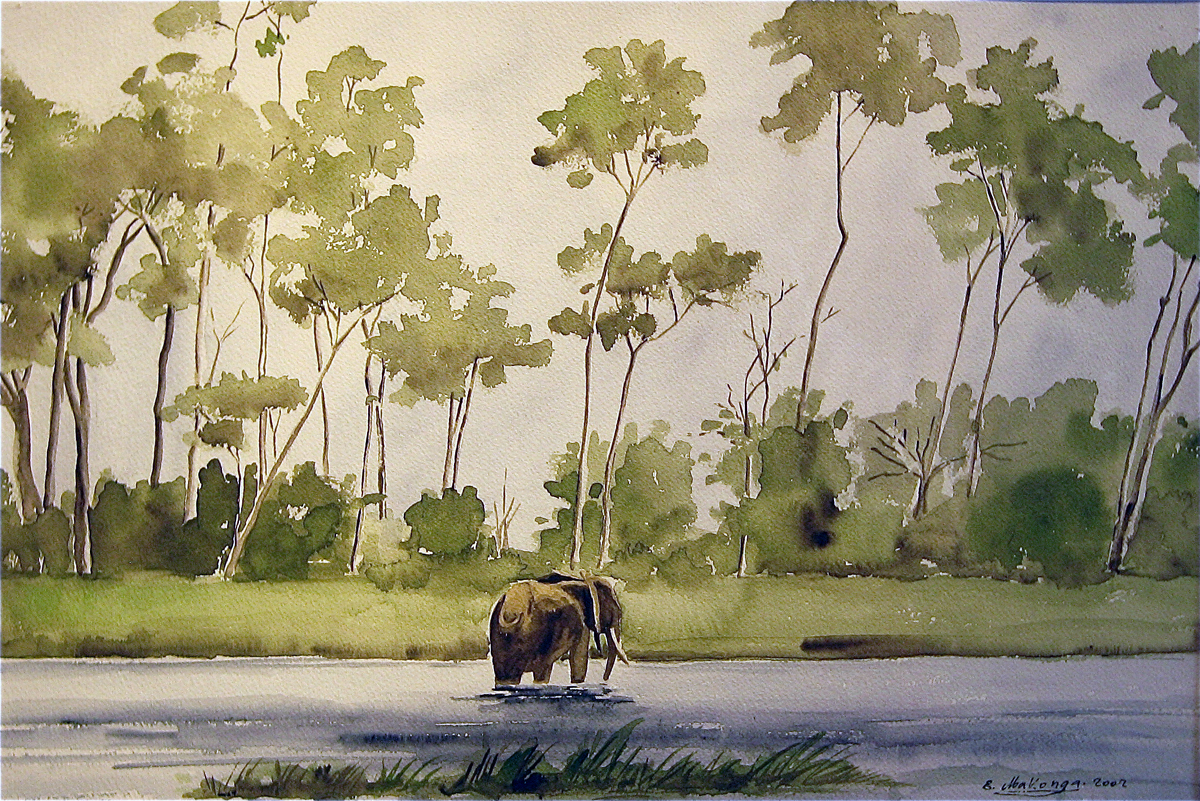 At Art Access II Gallery you’ll find none of the political activism that marked Makonga’s early career. What can be seen is a manifestation of the artist’s hopeful vision of another side of the Congo. The images incorporate the best of what Makonga knows to be true of his fellow Congolese and their land. Makonga paints market scenes where villagers gather, bringing fresh produce, and fish mongers who contribute with the catch of the day. He paints beautiful African woman in traditional Congolese costume washing clothing in a stream, enjoying the satisfaction that is the reward of hard work. He paints giraffes and elephants that can drink from the pond without fear of poachers. He paints children at play, groups of boats gathered in a cluster in the bay while their oarsmen chatter casually under the midday sun. He paints villages and huts which do not know time. In these watercolors Makonga seems to forget politics and the suffering he has witnessed and uses his vision to transcend all that has plagued his nation.

Makonga sees the village as a place of peace, endangered by encroaching modernization. He speaks of the joys of village life. He speaks of villagers in their ’90s who have never seen a hospital, whose medicine comes from the communal herbalist. His vision of his country is abundant with gifts from the land and giving back to the land, enjoying a natural world that is lush and pervasive. The village, he says, is disappearing. In his paintings he wants to “stop time” and preserve the village for the future generations before the bush is taken over by cities and cars. “It is a style of life that is really important. Really rich,” he says. 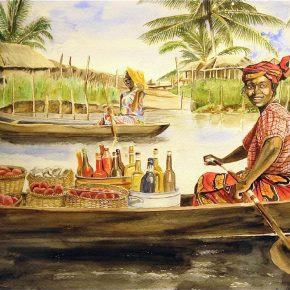 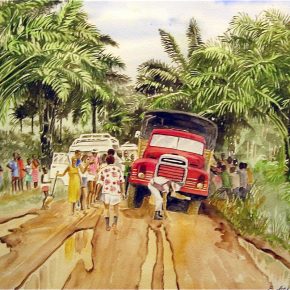 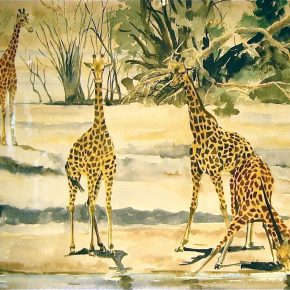 The exhibit at Art Access is only one aspect of the artist’s work. He is a talented artist who is exceptionally skilled in a variety of mediums and he doesn’t plan on restricting himself to just one part of his portfolio. In September, Makonga will be exhibiting his comic books at the Gallery at the main branch of the Salt Lake City library. They deal with our need to protect the environment. The story, he says, will be “in Africa, but it is the same story for all of us. . . It will be a universal book.”

He also plans on producing political cartoons in the future. He says the recent election in the United States inspired him, but he missed the opportunity to be involved.

Emmanuel Makonga’s young desire to become an artist manifested itself in ways he could not have foreseen or planned. His vision has made him not only a great artist but a great man: a leader, an activist, a role model, an educator, and especially a man of vision. By following his impulse to practice what he loves, he has been able to affect millions in the third largest country of Africa. Through Makonga’s artistic talent, his intellect and vision, many people have found relief through humor, and hope, without which nothing is possible. 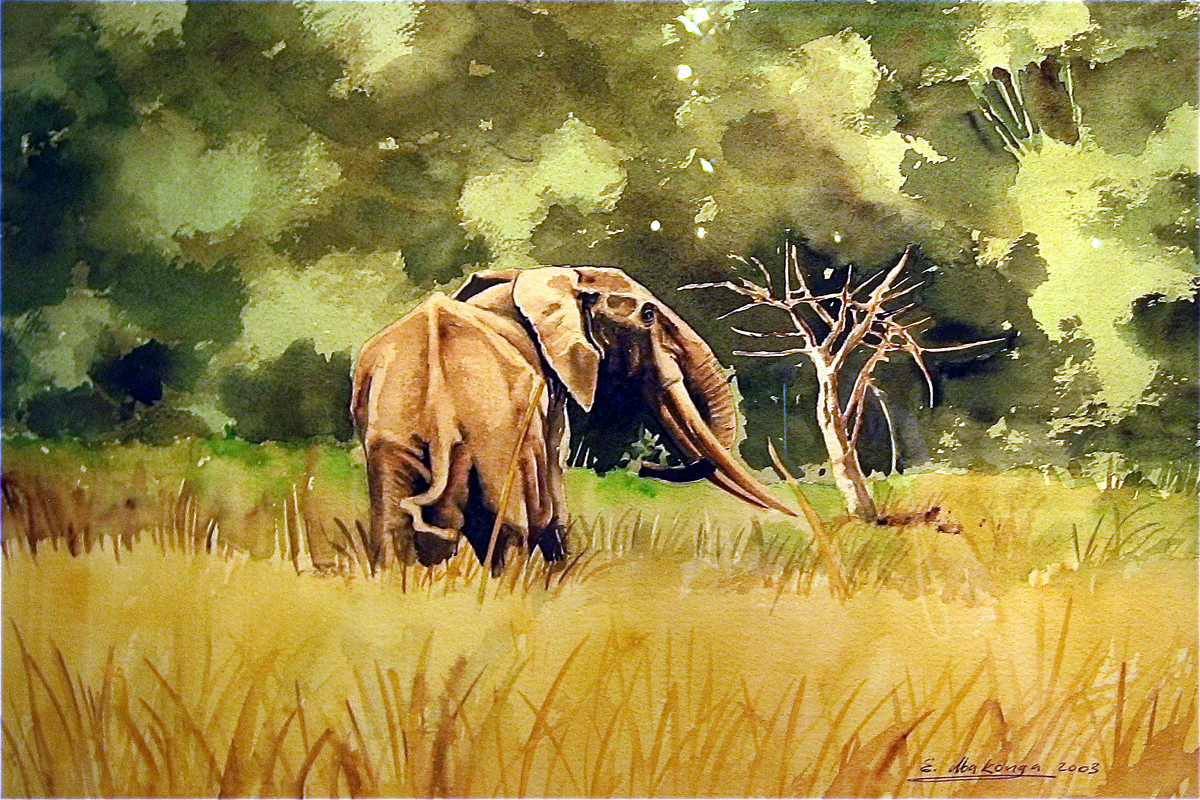 Emmanuel Makonga’s watercolors will be on exhibit at Art Access through May 9. You can view more of his work at www.makongart.com