Elpitha Tsoutsounakis Mines Ochre for Its Past and Present Possibilities 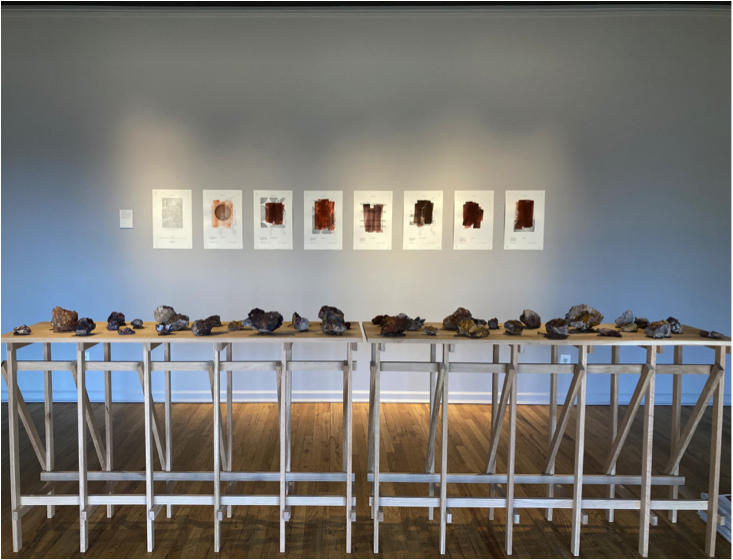 In Finch Lane’s west gallery, past Casey Lou Miller’s intricate wood cutouts of desert plants, Elpitha Tsoutsounakis’ exhibition, Unknown Prospect: Body, Pigment, Swatch, creates a space for the expansion of thoughts and ideas concerning earth. Throughout the space, Tsoutsounakis explores and ponders the multifaceted roles and forms of Ochre, a mixture of ferric oxide, clay and sand, and the oldest known pigment used by humans.

Elpitha Tsoutsounakis is an assistant professor in the Multi-disciplinary Design (MDD) program at the University of Utah. In the introduction of the show, Tsoutsounakis says, “I assemble raw materials, or ‘Ochre bodies,’ as design research practice in earth materiality and color.” Ochre connects to ancient practices and artistic uses as well as modern capitalist, extractive industries. Tsoutsounakis also connects the pigment to the human body through the iron found in Ochres and highlights how iron cycles through rock, dust and blood.

“Volume One: Body,” the first of three sections in this exhibition, consists of a 2D and 3D element. Seven maps printed on cotton rag and painted with different shades of Ochre pigments, show the East Tintic Mining District, in central Utah.  In front of these prints is a long wooden table with rocks, or Ochre bodies, that were collected from the mining district. 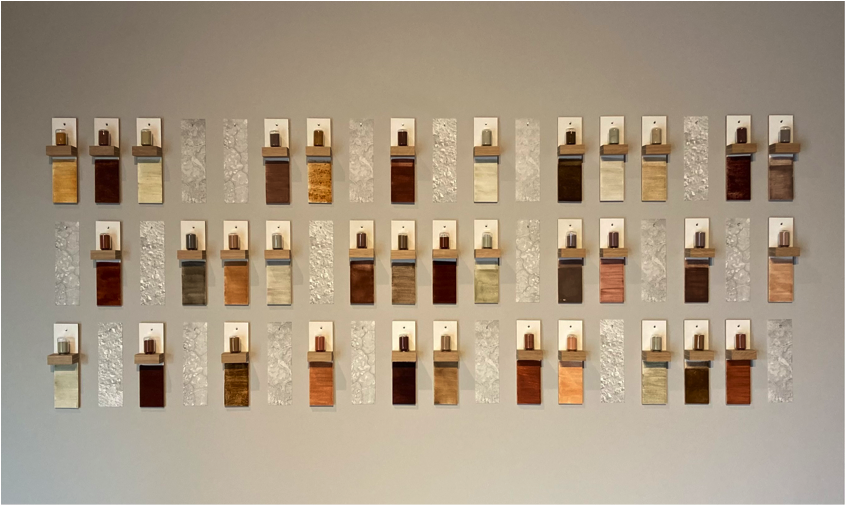 “Volume Two: Pigment” presents a wide range of the different colors Ochre pigments can create. The work itself features three rows of eight thin, rectangular blocks, the majority of which have a small shelf that sticks off the block. These shelves hold a small vial of raw pigment, and that pigment, combined with a binder, has been painted on the bottom of the block. Interspersed between these pigments are images of earth and rock, in black and white, that are the same shape as the blocks holding pigment. These pigments were assembled over nineteen different field visits and collected from mining sites throughout the Colorado Plateau. Tsoutsounakis also calls this work “Ochre Tamata” and explains that Tama are a form of votive offering to the gods and to supernatural forces since ancient times. Framing the work in this way may encourage the viewer to see these pigments and earth through a divine lens.

“Volume Three: Swatch” is dedicated to the San Rafael Swell, a large geological feature that includes Goblin Valley and the San Rafael Reef. The area is now known principally as a place of recreation, but “Volume Three: Swatch” uses an archived image, taken in 1918, of the historic mining district around Temple Mountain as its base. The image is reproduced forty-eight times in four rows of twelve. Each image has a small “x” swatched onto it. These swatches are Ochre pigments that were collected from this site and combined with gum arabic.

Throughout the gallery space, Tsoutsounakis explores and ponders the multifaceted role and forms that Ochre can take, from musing over mining districts, where humans undo millions of years of geologic formation and reshape the landscape of our planet, to the different pigments Ochre can become. The work is intriguing and thought-provoking. Ochre is a technology for communication, an agent for petition and promise, and a more-than-human substance that travels the universe transforming the face of the earth and the human body.