Elik Press: An Important Niche of the Heart 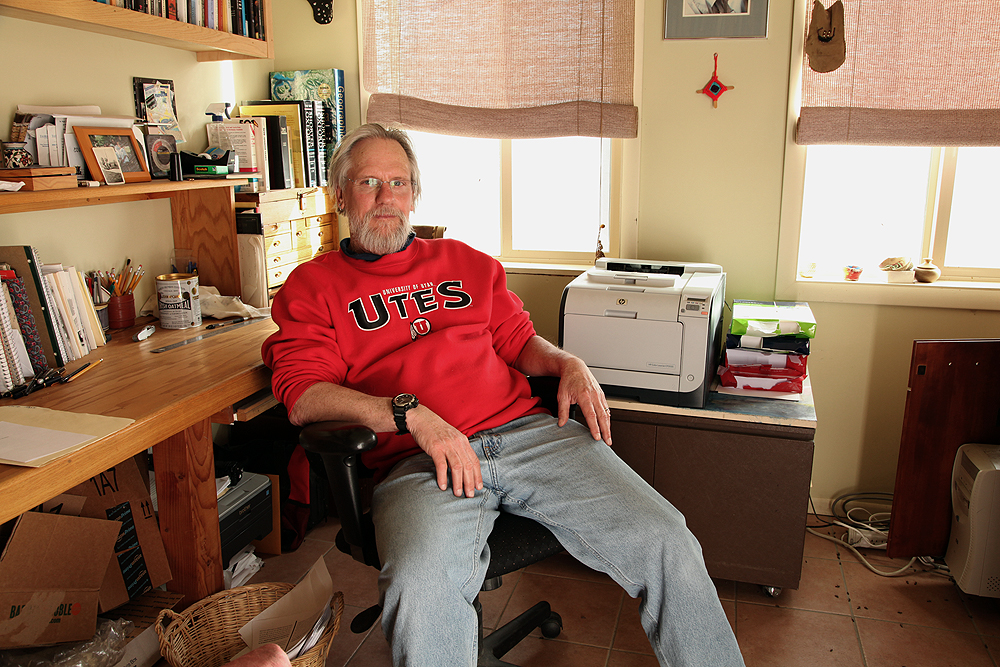 Andy Hoffman inside the offices of Elik Press, where an ink jet printer shares space with some out-of-date-but-still-functioning computer equipment and some dead box elder bugs.

As Salt Lake City-based publisher Andy Hoffmann will tell you, his Elik Press “is an entity that comes and goes with my energy for it.” That energy has been considerable over the years as the small–arguably “micro”–press has kicked out many a chapbook of many established and emerging writers, especially poets, from Utah and beyond.

Born out of political activism by Hoffmann and Michael Gills, both writers, the press was a personal project that, for Hoffmann, originally from Arizona, stemmed from his time in the mid-80s when he emerged from Naropa University in Boulder, Colorado. “One of the precepts [from Naropa] was to spend some part of life devoted to publishing others,” he says in an email exchange, “in whatever form that would take.” One of his mentors, Anne Waldman, a cultural/political activist and  member of the Outrider experimental poetry community, instilled in him that “to become the bridge between a writer and her audience is part of the vow to poetry that is essential if we want the language to live.”

After earning his Ph.D. at the University of Utah’s Creative Writing Program in the mid-90s, Hoffmann was in “work mode” when the controversial African-American poet and activist Amiri Baraka made an appearance in Utah and “shook things up.”  Appearing on a panel sponsored by the U of U and BYU departments of humanities, Baraka “proceeded to steal the room with his rant on the unjust shooting of innocent blacks by [the] NYPD,” he recalls. “Baraka made sense with his wail. Post 9/11 and we could see that Bush was pushing for a war that made no sense.”

Shortly after the encounter with Baraka, who died in 2014, Elik Press was founded. (Elik is Inuit for “one who has eyes.”) “The idea was that we would stick with nonfiction,” Hoffmann says of those early years, “and the more political, the better. Our first publications were essays of our own, along with a [Allen] Ginsberg interview we copped from a friend, and a [William S.] Burroughs tract that Waldman grabbed from Naropa’s archive.” The two publishers started creating monographs as chapbooks, which are, to this day, still the heart of the press. They published their own manifestos as well as interviews, including one with the brilliant Nicaraguan Catholic priest, poet and politician, Ernesto Cardenal, a liberation theologian and founder of the primitivist art community in the Solentiname Islands where he lived for more than 10 years. Submissions from all over started coming in to the press, especially when writers of a certain bent knew that Waldman was involved. 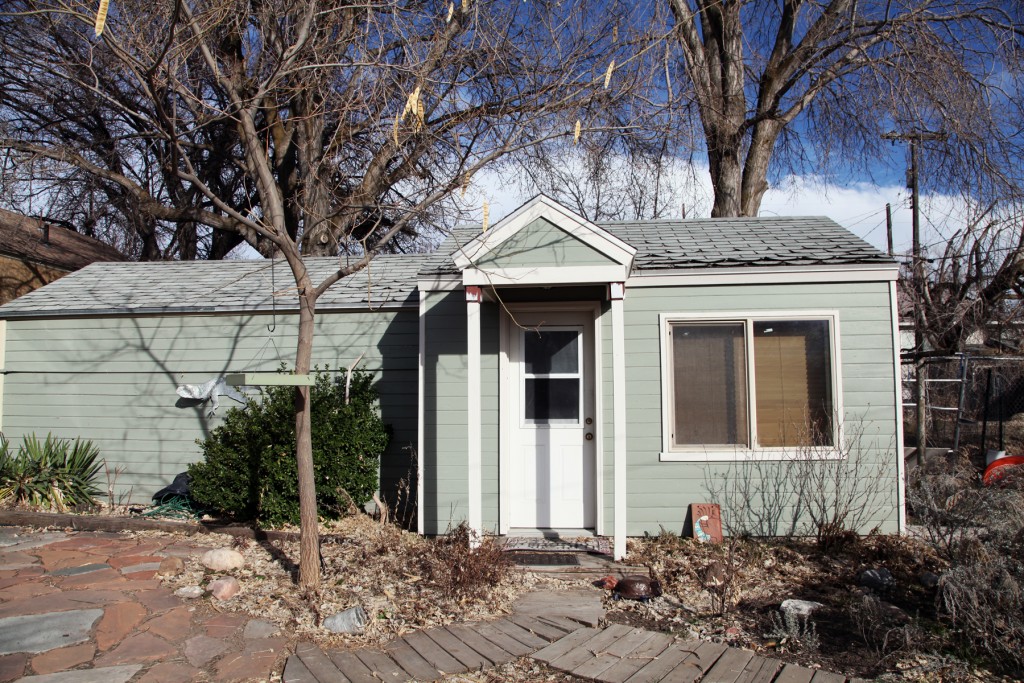 Only political prose was accepted until about 2006 when “publishing poetry,” says Hoffmann, “started to make sense.” For one thing there was suddenly a lack of political work being submitted that was also literary. Plus, Elik saw that poets just needed to get into print. “This was before the digital opportunities appeared,” he recalls. “I published Ira Cohen [the poet, publisher, photographer and filmmaker who died in 2011] who, as a younger man, published widely in small journals, but he hadn’t published a lot of books. He adored his Elik books. Even Paul West, [the British-born American writer] who had 20 books in print by major publishers, was delighted to create monographs [with us].”

The list of poets Elik has published is impressive: Alex Caldiero, Joel Long, Utah Poet Laureate Ken Brewer, Hector Ahumada and Melissa Bond, among many others. Of late the press has found that with print technology the way it is now, stapled wrapped chapbooks are not really that much less expensive to produce than traditional books bound with adhesive. In 2014 Elik published its first perfect-bound books, including Dark Music by Gordon Ball, a major figure in the Ginsberg group. The book, says Hoffmann, is “an amazing piece of Beat lit that hasn’t been paid attention to yet, but it’s interesting enough to matter in the long run.”  Another, Negative Spaces by Nate Liederbach, received some attention, including in the pages of 15 Bytes (read the review here), and is the first and only fiction Elik has published until now.  “It’s not necessarily practical printing books that don’t sell,” Hoffmann concedes, referring to small runs and the lack of a robust means of distribution (the bane of all small and micro publishers). “Even so, the joy that even the slightest publication brings to an author is worth being part of, and I believe now more than ever that small publishers fill an important niche of the heart…. I have a friend who works a letter press, printing a single poem by poets unknown on postcards in runs of 20. When I receive these postcards in the mail I feel the gift. I’m sure others feel the same.” 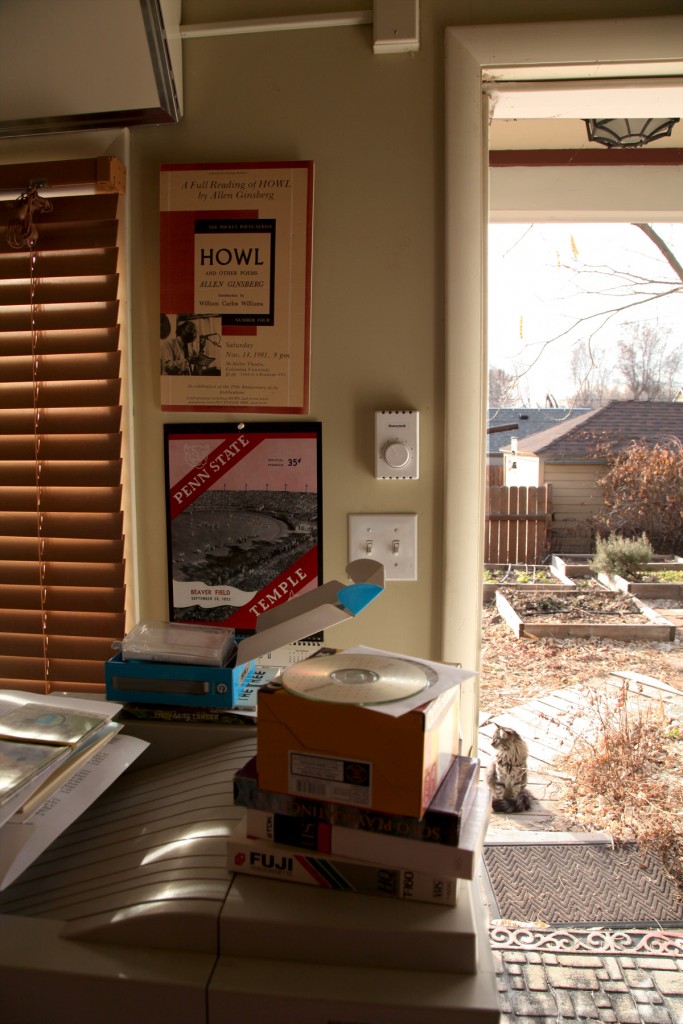 Political activism has arguably taken on a more measured role at Elik since poetry chaps have become standard publishing fare. Before Gills left the press in 2006 he conducted poetry workshops with imprisoned women as well as aging seniors at Salt Lake City’s Friendship Manor. Those works were published by Elik. That founding spirit is still present, says Hoffmann: “If somebody comes to me with a project where marginalized voices can be heard, I’m always willing to help.”

When asked if the social and political activism of Elik Press has paled because of the times, Hoffmann waxes philosophical.  “Critical race theory and gender/queer studies are still huge, and that’s where the activism has been all along. [It’s i]ronic that many postmodern thinkers in the U.S. completely missed the fact that [French, postmodernist philosophers Michel] Foucault and [Jacques] Derrida were critiquing both capitalism and communism of the late ’60s.” He continues, “And as much as the Frankfurt school was and is appreciated, seems like much of the postmodern angst got lost in obscure language and wordplay when it very well could have deconstructed institutional aggression and exploitation, etc.”

He cites those literary and cultural critics (e.g., Edward Said) who didn’t fall “into the language trap” as many did, including so many avant-garde poets to whom “theory became the chief tool of expression rather than the poetry itself….I do think as a whole, the postmodern humanities did little to energize or activate graduate students.” That said, Hoffmann still sees the small magazine, pamphlet or monograph–what Elik is known for–as critical players to the necessary subversion of the status quo.

Elik is releasing two perfect-bound books this spring. The first, Dear Carolyn: Letters from Carolyn Cassady to Jim Jones, is a collection of late-life letters from the former wife of Neal Cassady, a major figure in the Beat Generation and prominently featured as himself in the original “scroll” version of Jack Kerouac’s novel On the Road. The other, Bull Awakening, is a short collection of poems by Ed Tick, a well-known healer among the PTSD folks and author of another Elik title Wild Beasts and Wandering Souls: Shamanism and Post-traumatic Stress Disorder, which has over 1000 copies in print. “For Elik,” says Hoffmann, “that’s a big deal.” Another title, Ginsberg’s Don’t Fuck Up Your Revolution tops out at about 1,200 copies, while author Jim Jones, who edited Cassady’s letters, also published Kerouac in Seattle with Elik, a piece that, among other of the presses titles, is now a collectible.

Book arts is an important part of Elik’s signature. Hoffmann does all the printing at his house on Lowell Avenue, with aged printers—the only feasible way because of costs. The chaps have not increased in price ($5.00 each) since 2001. He’s considering going even more in the direction of handcrafted books, hand-cutting boards and making special runs of hard bounds. 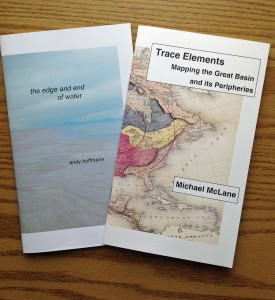 The publication of the recent chaps, Trace Elements by Michael McLane and Hoffmann’s own At the Edge and End of Water is, he says, “first a celebration of friends. I’ve known Michael since he was a teenager attending the Sawtooth Writing Conference, and I’ve followed his writing since. Trace Elements is just the beginning of Michael’s searching below (and above) the surface of the Great Basin and its toxicity.”  The respect is mutual. Says McLane, “For me, growing up as a young writer here in Salt Lake, Andy Hoffmann was one of the first ‘literary activists’ I encountered. For every effort he put into his own beautiful work, he put just as much, if not more, into editing, prompting, and promoting the work of others he believed in. Elik Press is just a culmination of this kind of advocacy and love. It’s a perfect example of the kind of small presses and publishers who are doing the dirty work of creating great literature and receiving far too little credit for doing so.”

McLane’s writing, like Hoffmann’s, is steeped in social and environmental justice. Currently, McLane is working on a much bigger Great Basin project. “I’d be willing to publish [it],” says Hoffman, “but Torrey House Press has better distribution, and they should grab that book in a second.” Hoffman’s own At the Edge is inspired by a trip to Argentina, the drying of the Great Salt Lake, and the work of Robert Smithson (of Spiral Jetty fame) who created in threes. To this reader, Hoffmann’s new chap  is a luminous meditation in both verse and prose on the dreamscape of human and environmental crossings.

Elik Press may be contingent upon the ebb and flow of Andy Hoffmann’s editorial and publishing energy, but his own crossings of the literary landscape seem indefatigably driven by a very personal sense of community and the value of giving voice to writers. That legacy of quality, small-scale, grass-roots publishing is a formative force in the flowering of what’s now being called the Utah Enlightenment, a renaissance of creative, thoughtful and critical work that speaks volumes . . . even (and perhaps especially) in a 24-page chapbook. 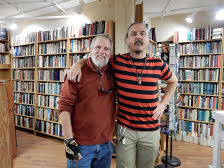 Andy Hoffmann and Michael McLane will read from their newly-published chapbooks, The Edge and End of Water and Trace Elements: Mapping the Great Basin and its Peripheries, respectively, at this week’s City Art Reading Series, Wednesday, March 2, at the Salt Lake City Library (downtown) at 7 pm.