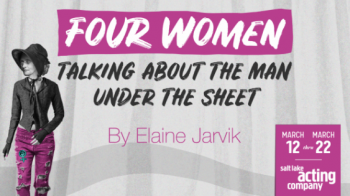 Salt Lake Acting Company proudly presents a world premiere from Utah’s own, Elaine Jarvik.
On the morning of February 21, 1895, the day after the great Frederick Douglass died, Susan B. Anthony shows up on his widow’s doorstep. She is there to grieve – but is she also feeling guilty? FOUR WOMEN TALKING ABOUT THE MAN UNDER THE SHEET is an exploration of feminism and race, asking “what compromises should you make in pursuit of a cause?”