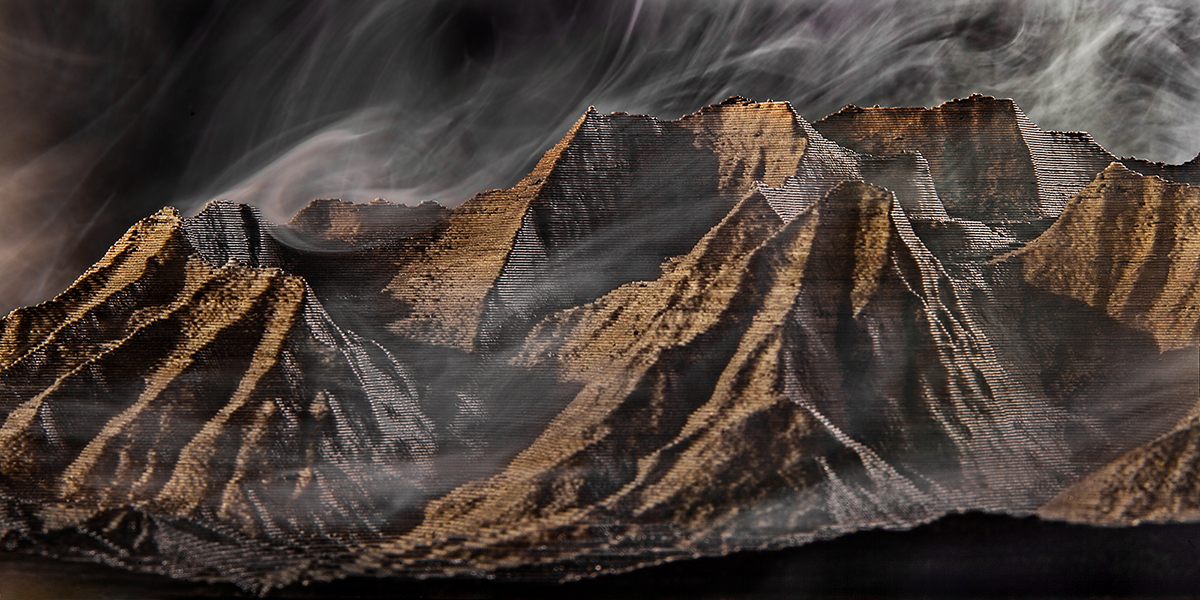 Edward Bateman’s latest work makes manifest the adage that one can create mountains out of molehills — molehills made from little bits of plastic and representing real-life Utah mountains.

“I think I’ve brought something new to landscape photography!” exclaims Edward Bateman, sporting a new-to-this-writer professorial beard vaguely reminiscent of Freud’s. The innovative artist is an associate professor in the Department of Art & Art History at the University of Utah, where he is head of the Photography and Digital Imaging area. 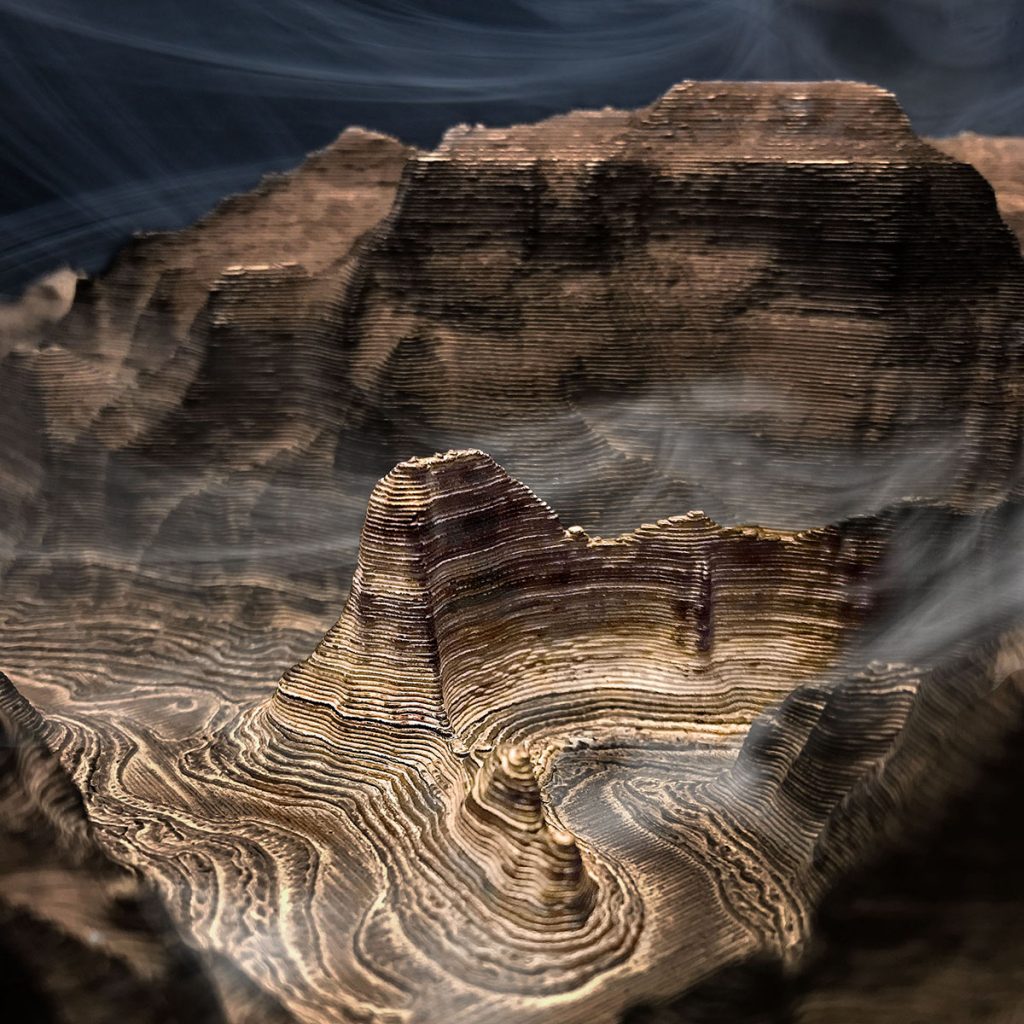 That something new came along during the Pandemic: with classes moved online and restricted travel, Bateman found himself sitting at his kitchen table, pondering. “Mountains have long been places of refuge,” Bateman muses. So he recreated them, on his kitchen table, using geographical data from the internet, a 3D printer and a small fog machine, “to try to capture something of the sublime in bits of plastic.” And while it appears to be classic photographic image-making, that’s not to say there isn’t a bit of legerdemain involved. Magic always seems to figure prominently in Bateman’s process as well as in the resulting artwork: here, the captivating photographs that are the point of all this.

Bateman insists that the images of Utah mountains at Phillips are pretty much what the camera saw. “I really didn’t do much that I wouldn’t do with a ‘normal’ landscape photograph. A little adjustment of contrast and color — so not much Photoshop magic needed,” says the artist. “And the cameras weren’t anything special either … just an extra attachment so I could get closer to the models. In many ways, I treated my models as though I was photographing the actual landscapes. Sometimes I would even have to wait for specific times of day when the light coming through the window onto the kitchen table was right.” 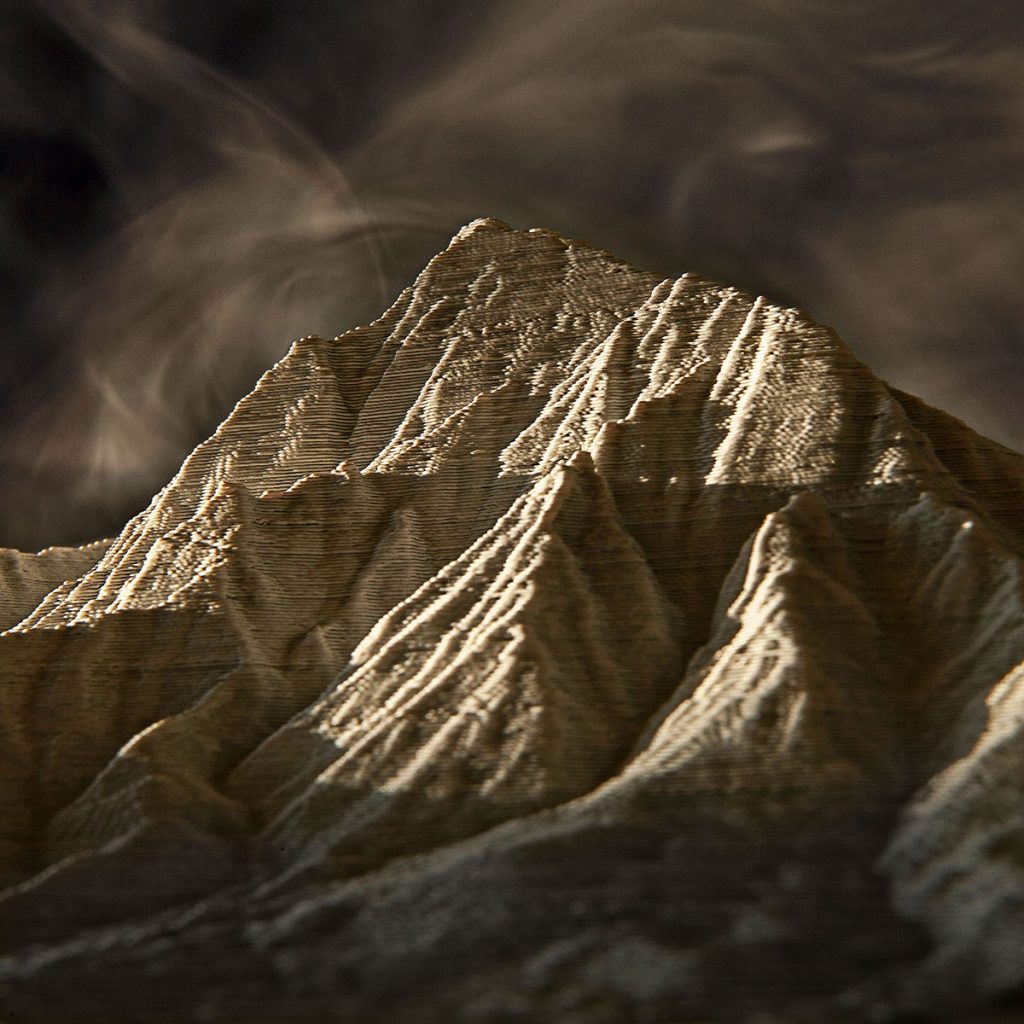 The first step for the photographer was to think of places that meant something to him – that had long been part of his environment. The first two models he printed were Mount Olympus and Antelope Island. “I knew where on the web that I could find the geographical landscape data I needed.  (Most of the original source of that topographical data is from the U.S. Geological Survey.) Some places were fairly easy to track down — others could take some time. It’s pretty easy to forget how vast the west is and how relatively small the landmarks are,” says the artist.

Using the topographic information found online, he created 3d computer models, turning them into instructions for his 3d printer. The plastic landmarks were created “one layer at a time — building up the terrain like the sandstone laid down over eons,” says the artist. “I printed my models at a slightly coarser resolution to make the elevation/contour lines more noticeable [like in maps] — I wasn’t trying to fool anyone that these were the real places,” he says with a smile. “They were printed out of PLA plastic — which is a bio-plastic … and can safely break down over time.  I sandblasted my models, mimicking (to a small degree) the natural process of erosion.” 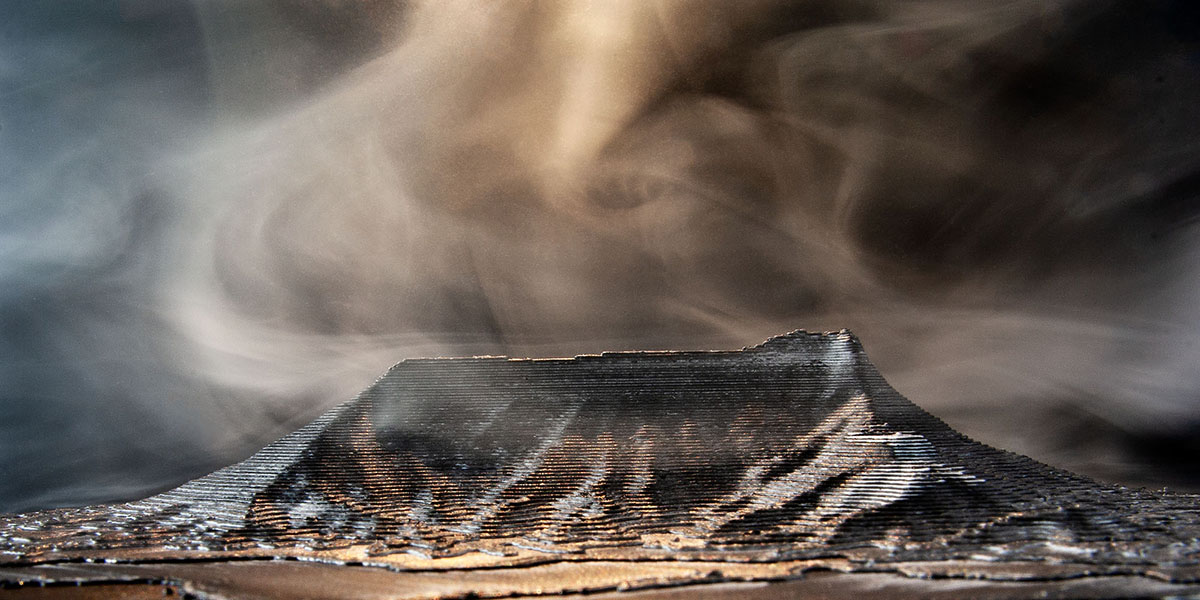 Bateman acquired a fog machine a few months before the Pandemic but didn’t get an opportunity to take it out of the box until school ended. He used it to provide atmosphere to his mountains. “The clouds it would make would change so quickly — that I would have to shoot hundreds of exposures. It was like time on that small scale was speeded up. Sometimes the clouds would be very surprising — when the air was calm, they would follow the contours of the mountains. And sometimes, as with real clouds, you could see shapes and figures in them. Because of the relative sizes, sometimes I couldn’t get my camera into a place that I wanted — but that could give me a different perspective. It is kind of interesting how we all have specific views that we expect for mountains — Mount Olympus is a good example of this. And of course, I could use artificial light — both flash and fiberoptic lights used for microscopy. In many ways, I had more control than traditional landscape photographers — and limitations too,” says the multi-talented photographer.

One of the subjects raised by this series is the place of the concept of The Sublime that became an important concept in landscape painting and photography in the 19 th century. “It can be a fairly nuanced concept – and is different from beauty,” says Bateman. “A quick, short description might be: That overwhelming feeling of grandeur and vastness when confronted with something greater than ourselves — such as can be experienced in nature. (There is often a sense of fearfulness attached to it.) So, I had to think about how that concept influenced this work and one of my first questions was, could the sublime be evoked from bits of plastic?” His answer? Yes, through the function of memory.

“In many ways,” Bateman observes, “I am most interested in the contradictions and questions this series brings up … I think that the more one thinks about this series, the stranger it becomes. While I (somewhat) don’t like to dictate a person’s experience with art, some questions include: Are my models any less real than a photograph? They are both made ‘from’ accurate data. Does that make my images more ‘real’ than any painting? What do we value in a landscape — accuracy? Real experience? Evoking our own memories — or even a sense of the sublime?  And scale? Are these works more like still lifes or landscapes? Landscapes are big and seen from a distance … mine are small and magnified up close. Do these models escape the ownership of the land? The mode of depiction is from the past — but the techniques (and actual subjects) are from the present … how do we reconcile this? The list of questions might possibly go on and on,” the artist says. “But hopefully, that too would be enjoyable and valuable … more than just a depiction of something (or somewhere) that we might recognize. The images I made felt somewhat like dreams to me. Which makes sense – they are certainly as much from my imagination as a real place on earth. I found that to be calming. In a time that has been so chaotic, it is nice to know that there are still a few things under my control that can give me joy, hope, and wonder.”

Edward Bateman was just included, for the third time, in the International Print Triennial in Kraków, one of the most important and longest-running events in printmaking. On June 26, he was honored as a laureate and was the recipient of a special prize. His work made specifically for this exhibition was similar with the work now showing at Phillips. 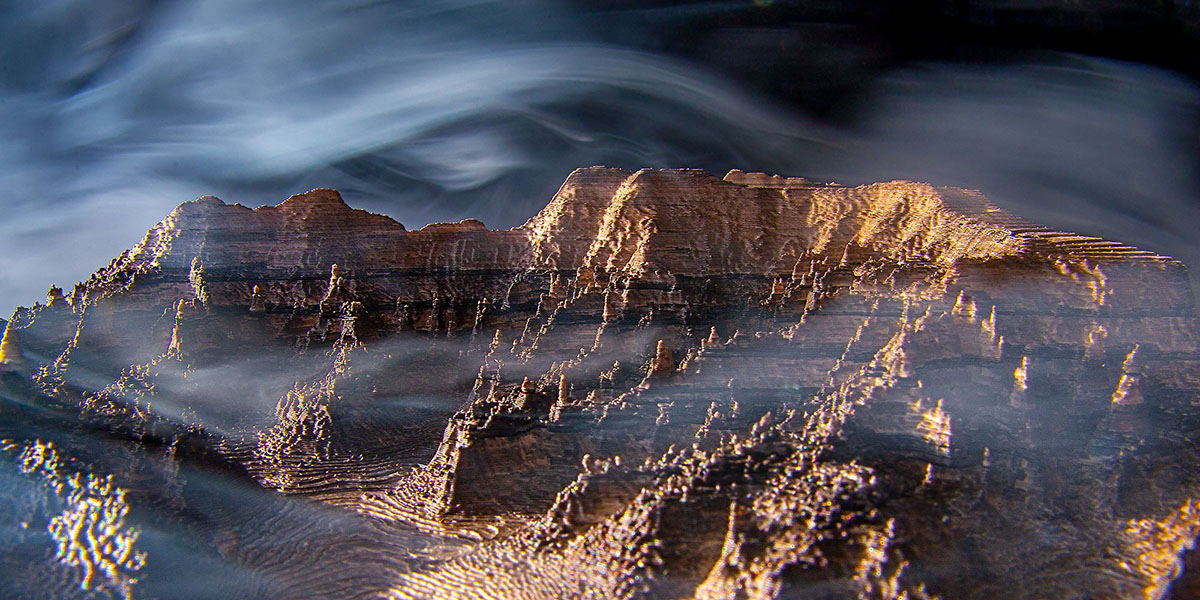