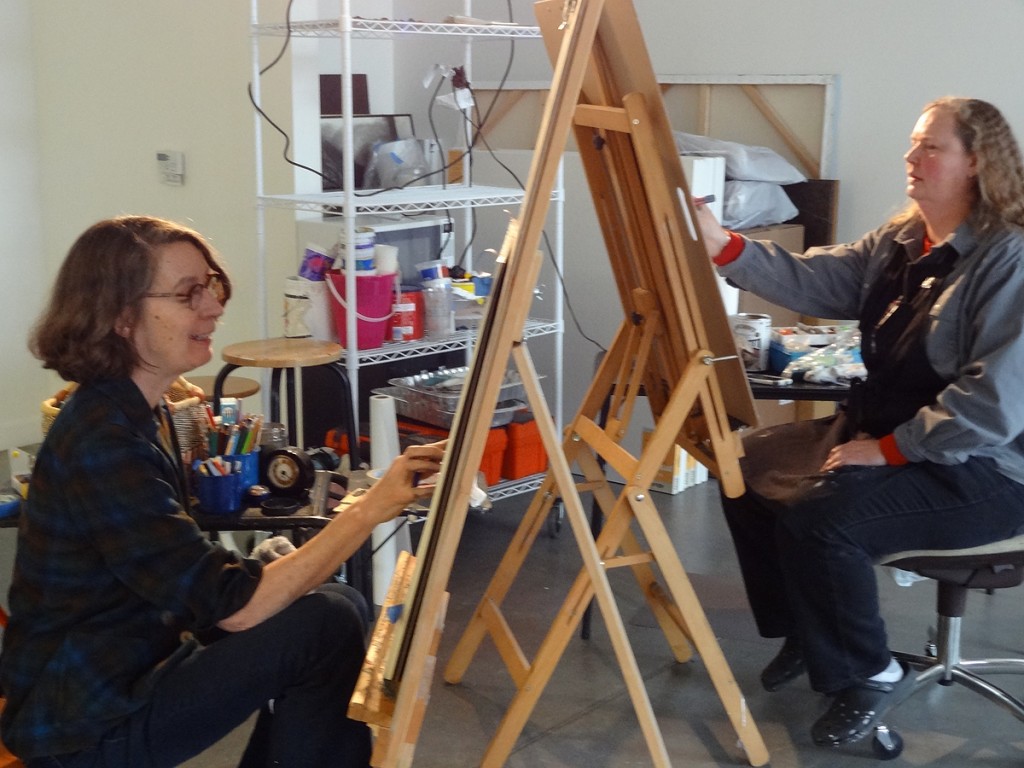 The performance by Kristina Lenzi and Gretchen Reynolds, scheduled to overlap with Gallery Stroll on Friday, March 21st, was called a ‘Durational Draw Out,’ a name that suggests a sporting event or an endurance contest. And why not? Who says art works better when it’s pretentious? Flexing their allegorical muscles is an apt metaphor for some of the many ways the entrance of women into art as the makers—not just the subjects—of art is meant to change the way the entire system works: how art is produced, who controls it, how it will (or will not) be marketed, who gets to enjoy it, what it means to the artist and her subject, and what it will mean over time.

In theory, all these changes were inherent in the first defiant breaks with the empire of art that were made early in the twentieth century. The middle of the nineteenth had seen wave upon wave of artists rebel against the official French academy: showing in alternate spaces and facing down powerful critics, like those artists whom critics called ‘Wild Beasts’—Fauves in French—or teased for their desire to ‘express’ by labeling them ‘Expressionists,’ and who then took those names and ran with them. In time, public opinion forced the government to set up alternative spaces to those annually displaying the official art. These were the Salons of the Refused, those rejected by the gatekeepers.

Anyone who thinks that battle ended in Paris in 1880 might be curious to discover that at Weber State, the judgments of the visual arts faculty as to what is or isn’t art has led to an informal, annual event wherein students whose works are rejected from the regular student show hang their works in the hallways of the studio buildings. Nor was the historical victory over the Academy—also, after all, a school—complete in any meaningful sense. As is so often the case, a political victory failed to end the economic serfdom of art, which continues to serve wealthy, powerful, conservative interests. Anyone who finds it frustrating that, a hundred and fifty years later, what constitutes acknowledged art, the art we are promised is the only art that matters and will last, is still determined by votes counted in dollars, will appreciate the alternate history that leads from Art Nouveau, the inheritors of that 19th century pan-European rebellion, down to today, and the corner of Eighth South and Fourth West.

Without doubt, the most important name in that history is Marcel Duchamp. His criticisms of established art are so extensive and sophisticated that we can hardly cover them here, but a survey of his creative responses might give an idea of the principles he sought to change. To name just one, while it took a man to signify in the male-dominated art world of his time, Duchamp—though elsewhere he demonstrated a predictably male gaze and an impulse to undress women—initiated one of his most fundamental changes by donning a woman’s clothes and appearing under a female name. Rrose Selavy (the last name is pronounced C’est la vie, French for ‘That’s Life!’) invited the audience to gaze on her, the ambiguous artist, as much as on her subject matter. But she didn’t stop there. Once Duchamp quit painting, or using any other conventional art method, what followed were not only alternative art forms, like Mixed Media and Performance, but new ways to show them, like Installation. And that brings us to that corner of 8th S and 4th W. 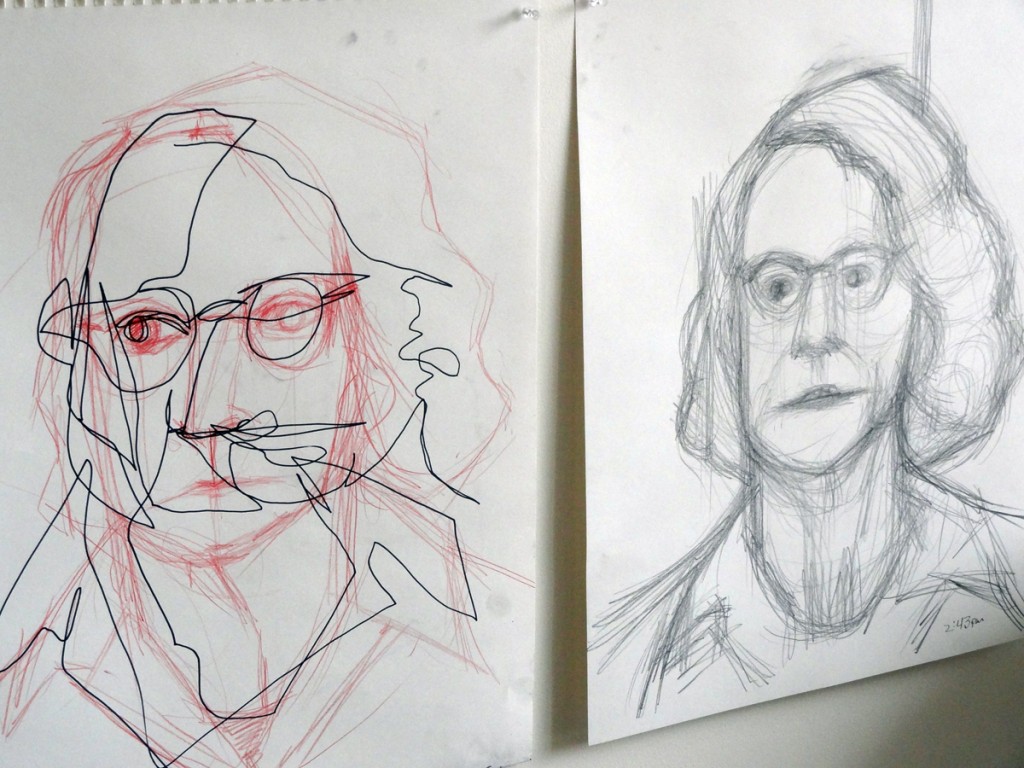 Kristina Lenzi has recently moved into a studio precisely on the southwest corner of that intersection, and she and her colleague Gretchen Reynolds chose to celebrate by facing off at a brace of large easels, set so the two artists could draw each other simultaneously. Then, for six-and-a-half hours, they drew nonstop, while the studio doors stood open and all comers were invited to watch as the walls filled up with variation after variation on the portrait, each marked with the precise time of its making. Lenzi, known locally for the ‘Abstract Political Cartoons’ she showed at Finch Lane Gallery, which were reviewed in 15 Bytes, is nationally recognized for performances that undermine assumptions about art so basic they go unnoticed, let alone unquestioned. Introjection, performed in Boston, saw her wrap her head in fabric, dip it in red paint, and draw using her entire body to query just where in the organism art originates. At the same time, Gretchen Reynolds has the courage, rare among art pedagogues, to teach art to students who have no intention of becoming artists, thereby

allowing her competitors for status in the art department to devalue her work. Both teach at Weber State, and one wonders how much they may have influenced the student body in support of those informal Salons de Refusés lining the corridors of power.

The bottom line in all this, to use the phrase correctly for once, has to do with the role of money in art. Whatever the material product may be of the Durational Draw Out, if there is one, there will be no fortune made, donated, or taxed. Works like these, like Lenzi’s performances and like Reynold encourages her students to make, want to exist outside the marketplace. This has been the goal of all the artists inspired by Duchamp and his allies, and it’s turned out to be a tougher challenge than at first appeared. Go to the Art Institute of Chicago or MOMA, attend the auctions at Sotheby’s or Christie’s, and you will see artworks once intended to resist commerce side by side with other precious objects. Other works, like those shown at UMFA during the Martha Wilson: Staging the Self exhibition in October last year, are rarely seen. Yet artists like Lenzi and Reynolds continue to . . . well, not to fight, but to live and work for the kind of uncontaminated process they believe best serves the human instinct to make art. 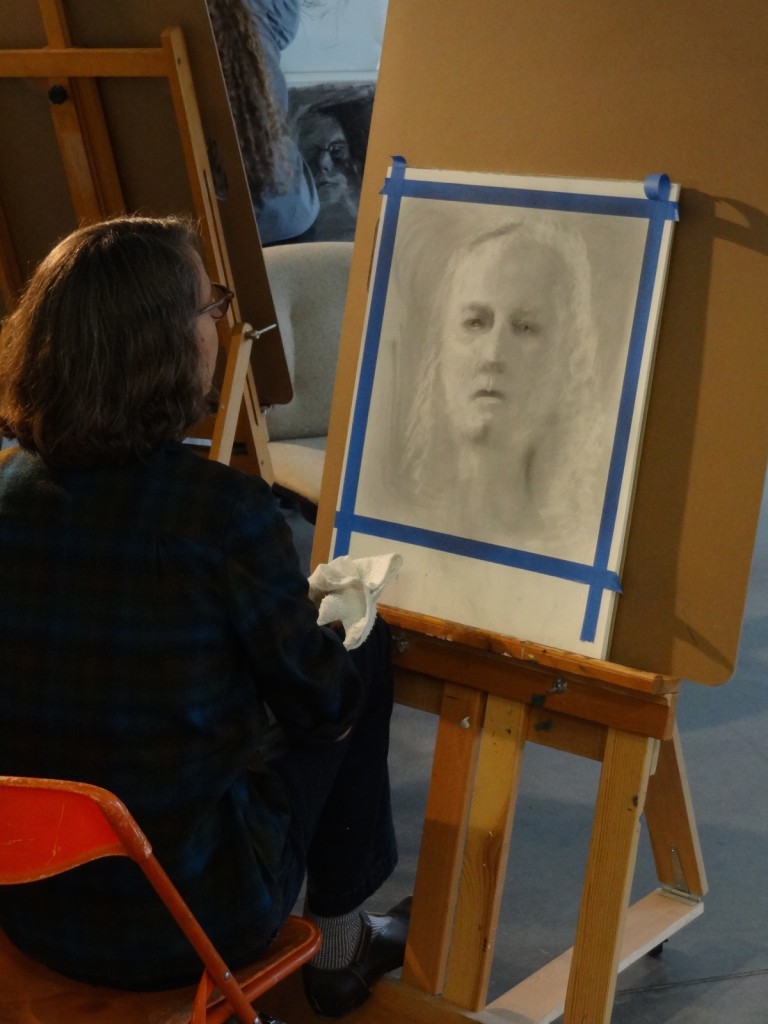 You can view Kristina Lenzi’s work at kristinalenzi.com.