Tonight, Gary Vlasic’s 48-hour performance at the Salt Lake Art Center — entitled “Dark Horse: Fallen Shadow” and promising continuous movement emphasizing the meditative process — will be sure to bring in a large and curious crowd (see below).

Before both of these was unravel, REVEALED, a twenty-four hour performance conceived and produced by visual artists Suzanne Simpson and Jim Frazer and choreographer Corinne Cappelletti in May of 2009. Scores of performers participated, transforming a small glassed-in alcove on the north side of Westminster College’s campus into a plein-air theatre that absorbed as audience both the dedicated viewers who came for hours at a time as well as the casual traffic along 1700 South.

To prepare the tweeted attention spans of our readers who might be attending the Art Center performance tonight, and to allow those who missed unravel, REVEALED a look at some of the powerful performance that filled an entire day last year, we’ve prepared a (relatively) short video clip from footage of the performance. 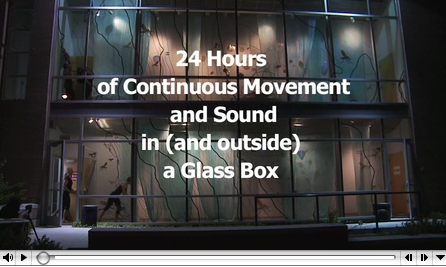 TONIGHT: Gary Vlasic’s Dark Horse/Fallen Shadows
is loosely based off the dance hall marathon craze during the Great Depression. The focus of the dance and theater performance, with a cast of more than 30 dancers, is the exploration of continual flow of motion and the human form, with an emphasis on the meditative process.

The event will begin at 6pm on Sept. 24th and end at 6pm on Sept. 26th, with special performances at 9pm on the 24th and 25th. The gallery will be open around the clock for the full 48 hours and guests are invited to join in the dancing at any time. Adventurous visitors who choose to visit the Art Center during the late night and early morning hours will be able to enjoy light hors d’oeuvres as part of the event. For more information go to www.slartcenter.org