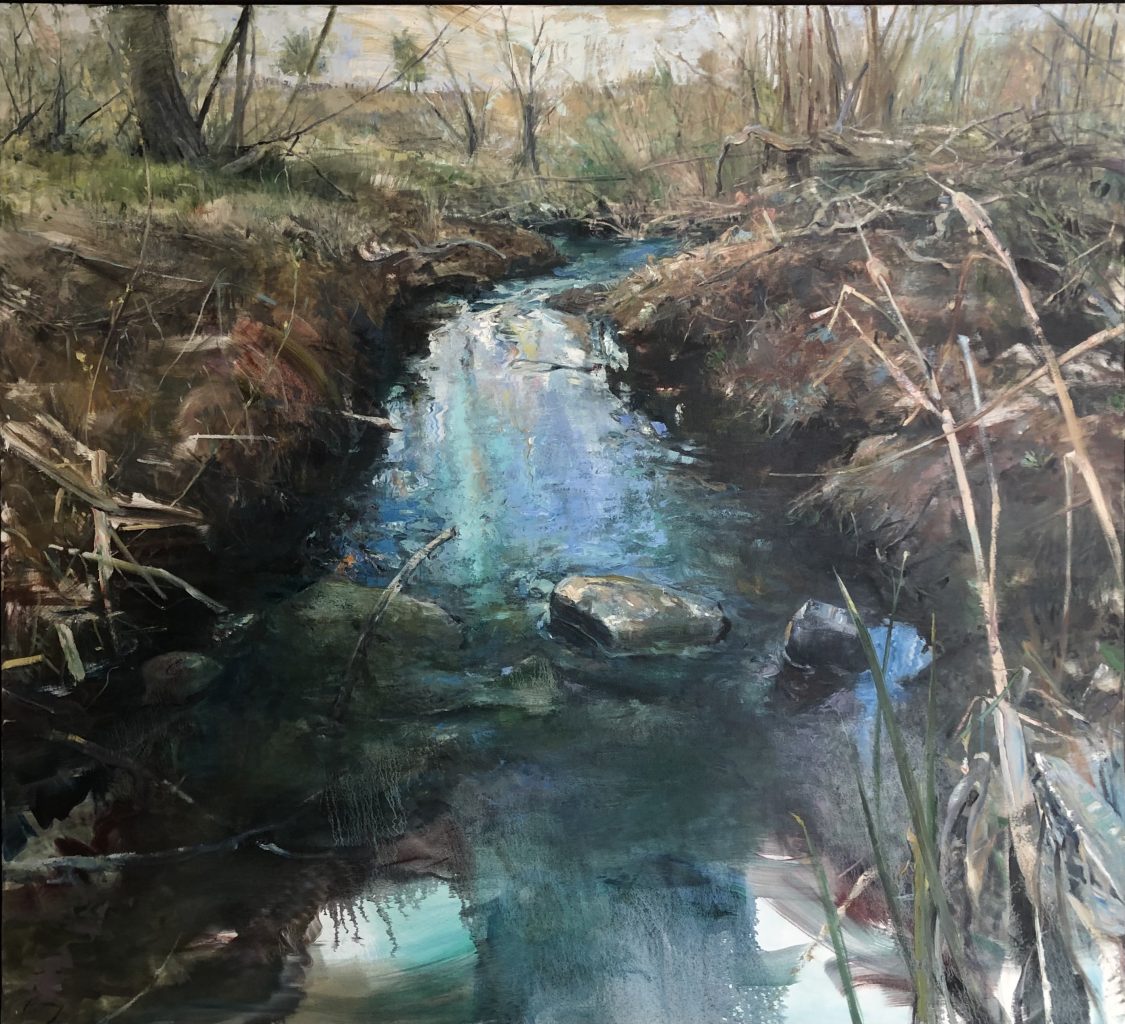 These must be some of the least iconic images of Utah ever to grace the walls of the State Capitol building. In place of, say, that monument to eons of slow erosion, Delicate Arch, an isolated monolith standing in a virtual sea of bare red rock, “Azure Stream” depicts a shaggy acre of dirt cut through by a lively, light-struck stretch of rapidly flowing water which, as its title makes clear, boasts a blue hue that overwhelms the browns and greens that surround it. Nearby, “Leaf Catcher” celebrates a ceaselessly active fluid engine that less alert observers might have mistakenly called a “dead” eddy. Looking for all the world like a pile of dry plant matter caught by a stray beam of light, it’s revealed on further examination to be leaves afloat on a swirling, circular current. Both these paintings, and the 14 others that together make up Downy Doxey-Marshall’s current exhibition, hanging among the marble ornaments of the capitol’s domed and vaulted fourth floor, show off the most recent achievements in this artist’s storied career.

If there is such a thing as a Royal Family of Utah Art, its current generation would surely include the Marshalls: Todd and Downy Doxey-. Anyone who doesn’t see why is encouraged to consult the dazzling profile written for 15 Bytes by the unsurpassable Ann Poore. And even though the artworks under review here were painted entirely by the artist currently known as Downy Doxey-Marshall, it would be futile to attempt to detract from them the contribution of her husband and collaborator, Todd Marshall. It’s commonplace to take for granted the wife’s part in her husband’s success, and that must change, but justice also means not simply reversing the original offense. So critical transparency is best served by acknowledging that behind what are arguably the best riverine nature-scapes to be found locally is one smooth-running and multi-talented partnership. 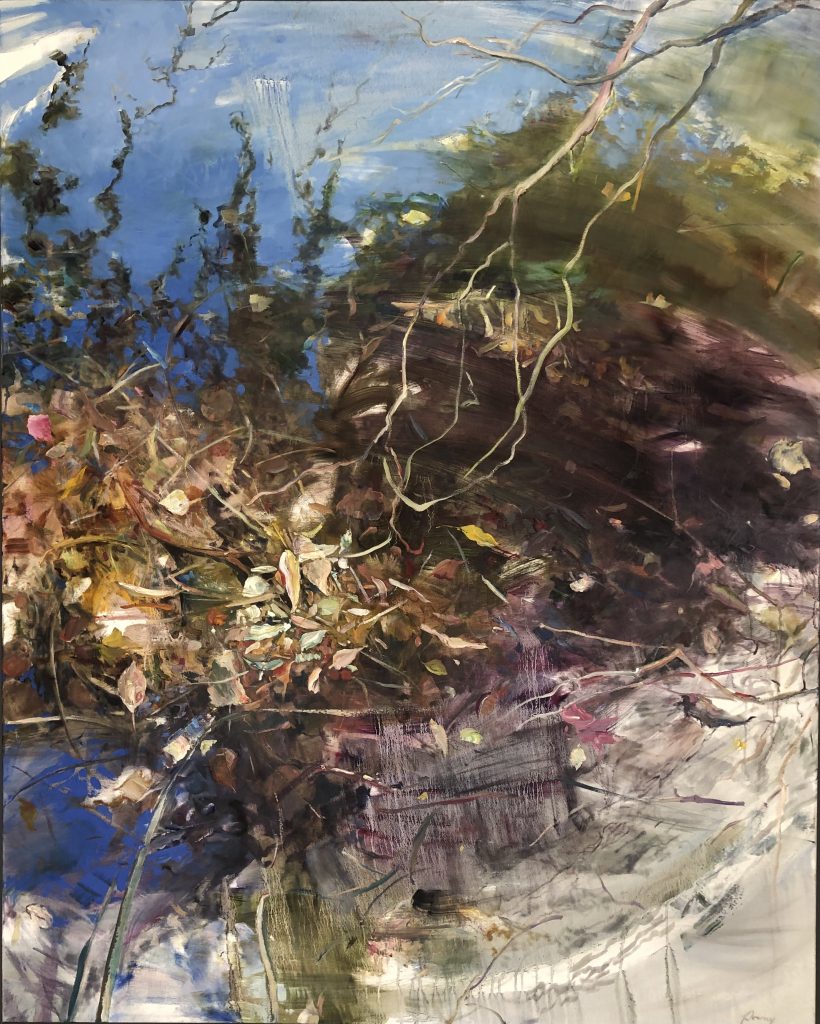 The art currently on display includes large oils drawn from Doxey-Marshall’s most recent period, or as she’s been known to style it, her latest “faze.” They represent a chronological survey of a project that began in 2017 and continues today. The first of them, “Paisley Pond,” isn’t present at the Capitol, but was accepted into the Statewide Annual Exhibition, UT ’17, which was reviewed in 15 Bytes. “Paisley Pond” stood out from the traditional Utah landscape in having no vast, ennobling view and no desert features. Instead, it features a body of water and the lush, overarching vegetation it makes possible. But even more, what made it remarkable was the way it was painted, which juxtaposed closely observed, realistic passages of nature with areas of abstract gestures that gave the overall scene a feeling of energetic, lively activity, rather than the stately, enduring, indeed immutable character expected of Southwest landscape.

That Doxey-Marshall recognized, consciously or otherwise, that she had found something new that could last is suggested by one of her next images: a self-portrait in which she stands out of sight on the bank of a ditch, only to be reflected back up from the surface of the water it contains. From then on, from canvas to canvas, she has explored, and made advances in, the effective rendering of water as seen through gaps in foliage, foliage seen through water, reflections of the sky above on water that hides or reveals what lies beneath, foliage mirrored in the water’s still surface, and so forth. That alone would be enough to keep a painter busy, comparing for example the effect of applied layers of white paint versus leaving exposed unpainted white canvas. But another inflection contributed something else. 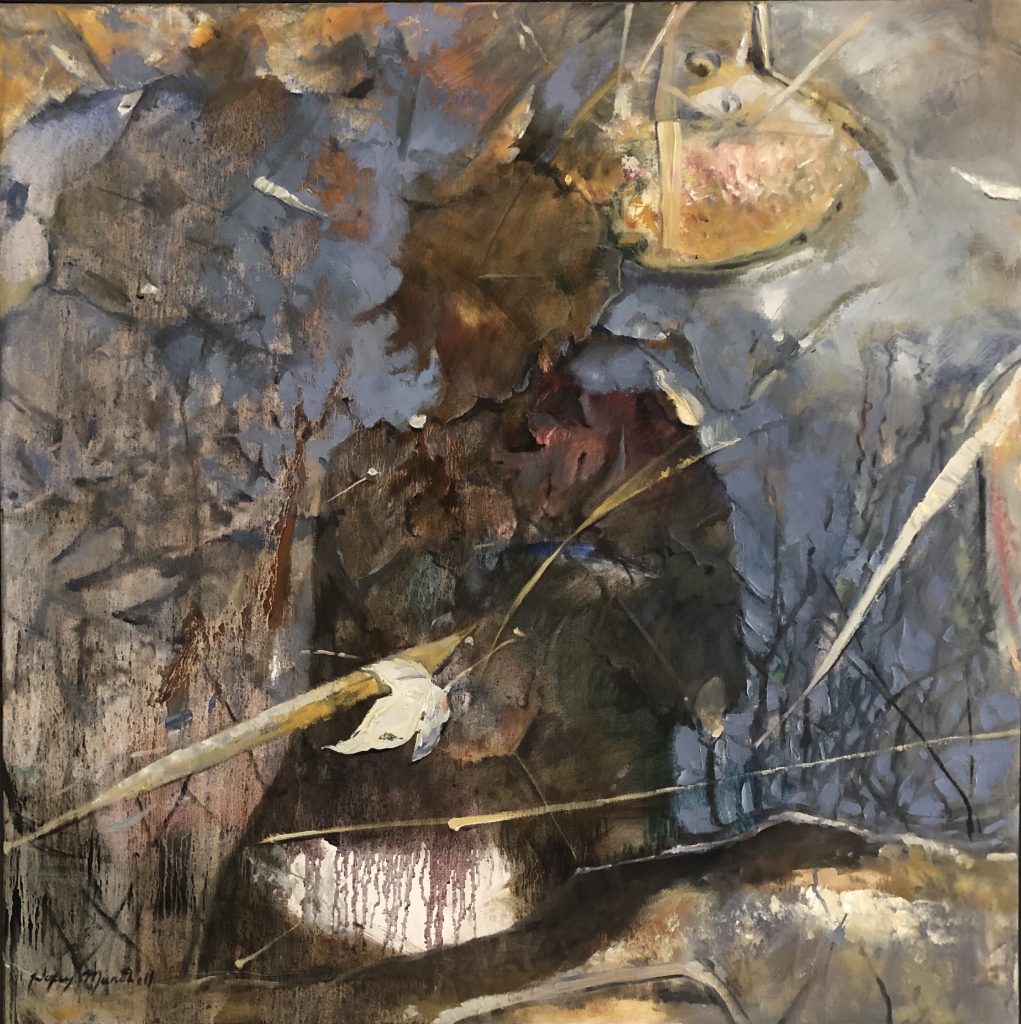 “Self-portrait from the Ditch Bank”

Ever since they met while she was studying art with his father in London, Downy and Todd have been inseparable, traveling extensively among the world’s sights and Utah’s scenic places. The sequence of her paintings inevitably came to reflect the succession of their travels. When standing before any of her water paintings, one or the other of them is almost certain to name the place in Utah where she gathered the elements that eventually gave rise to it. That’s different, of course, from saying “the place it shows.” In fact, these 16 images and all the other contemporary ones are, in essence, fictions — even more fictional than a deliberate copy of a specific view, though even that can never be more than an approximation, either. Once she gathers enough images, ideas, and memories of a specific place to get started, though, Doxey-Marshall surrenders what she knows to her imagination, and lets the parts of the painting call each other into being. 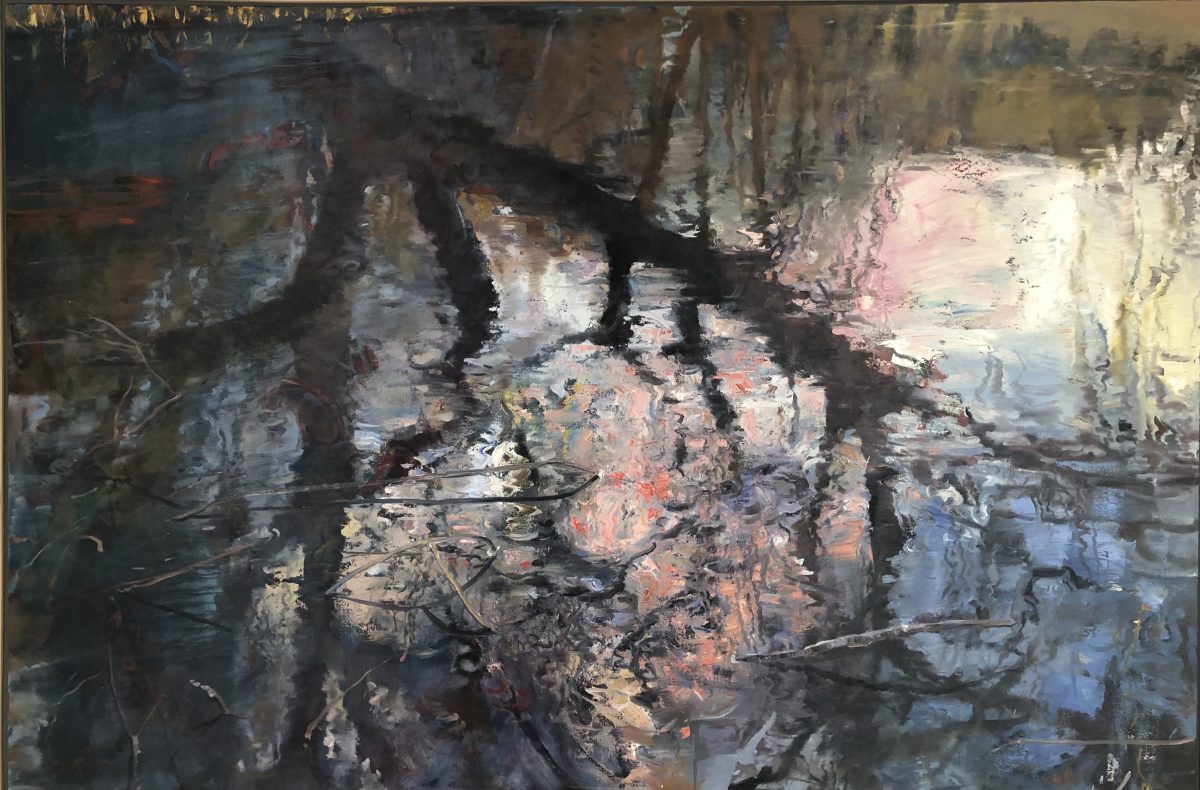 Painters have a more intimate relationship with their work than some other professions can boast. Pointing to a brilliant pink spot in the center of “Cotton Candy Swirl,” one of what must be thousands of square feet she’s painted in the last five years, Doxey-Marshall says, “Once I found out how to make that color, there was no turning back.” Of a passage in another painting, she adds, “That sort of thing reprograms your brain.” Nor does she mean only the artist’s. Another thing she shares with creative types that, like her, are both prolific and successful is her work ethic. Students are told to work every day in order to maintain their progress, and that’s vital advice for that stage, when waiting for inspiration is deadly. But Downy Doxey-Marshall works in response to certain stimuli that she knows well and has control over. Between the projects that provide her a reason to paint, she may stay completely away from the studio. Then, after a spell of gathering not only sources, but such mundane materials as stretched canvases, and imbued with the Todd’s constant presence, she becomes the dynamic, irresistible artist who signs her canvases Downy.

Perhaps it will happen that some of those who work in the capitol, or whose business regularly brings them here, will wander into this show and come away with a refreshed awareness of the ubiquity and indispensable role of water, from gullies and springs to creeks, rivers, and finally lakes, in the lives of all living things here in Utah. If something isn’t done soon, there will be no need for artists of any sort. But if enough of us take heed, the key role of Utah waters in the entire western hemisphere may still continue. 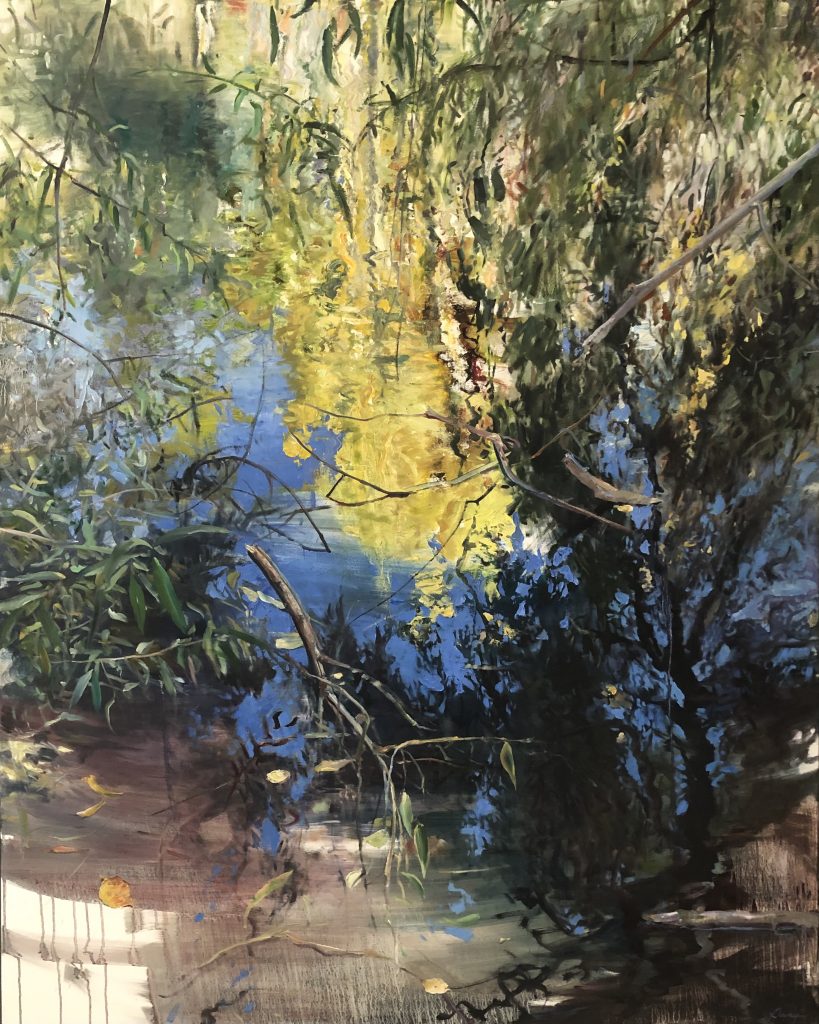