Downy Doxey-Marshall Explores the Hypnotic Freedom of Water in “Immerse” 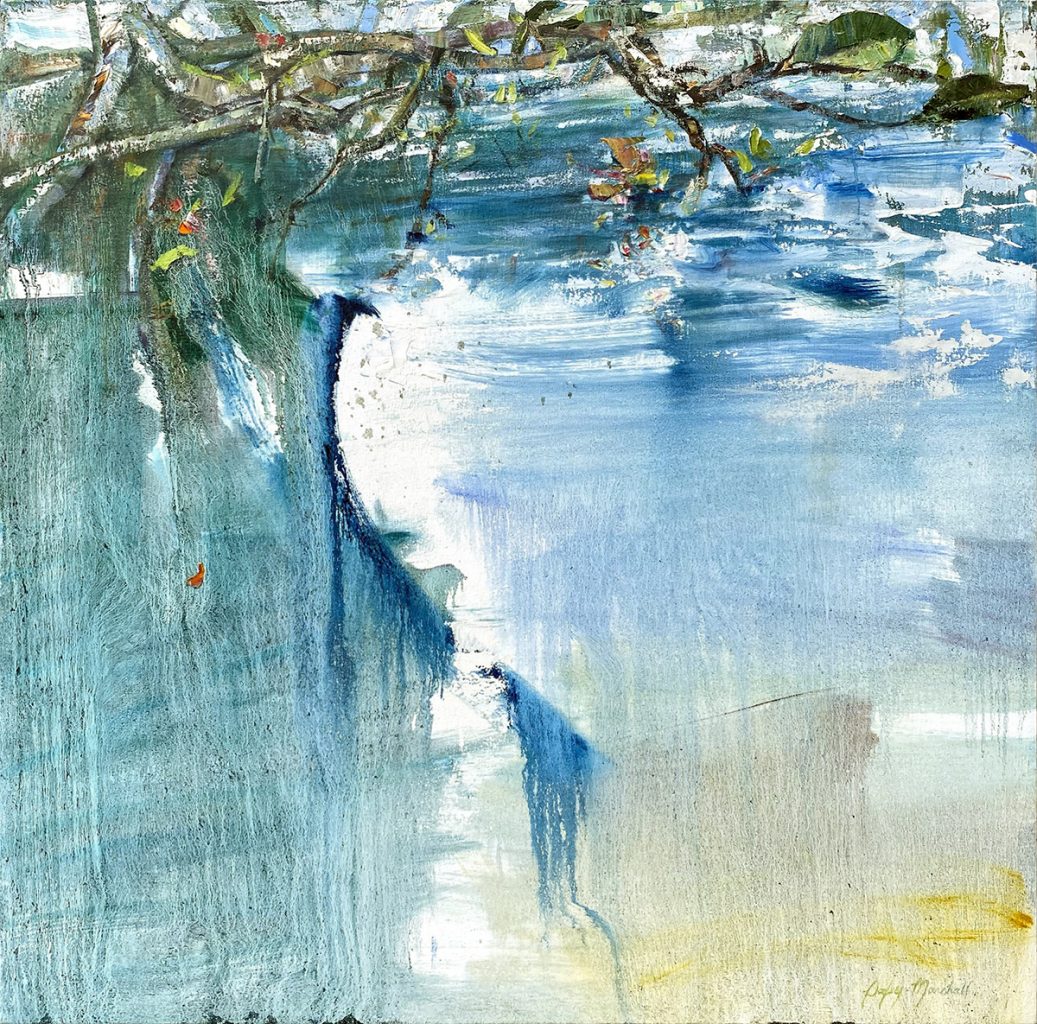 Downy Doxey-Marshall introduces the baker’s dozen large oil paintings in Immerse, her current show in the Phillips’ Dibble Gallery, with a twice-relevant quotation from Pablo Picasso:

The purpose of art is washing the dust of daily life off our souls.

The key here is “washing,” a word that invokes both the refreshing and restorative power of art and the subject matter of Doxey-Marshall’s luminous achievement: water, in its natural, fluid state. Whether in a pond, where she recalls dreaming of it and where she has often celebrated its essential connection to life, or as the original lens, gathering and scattering light, or captured in the bodies of a profusion of its primary beneficiaries, plants, water is the subject that has most captivated this artist and that she, in turn, has learned to beguile into paint. 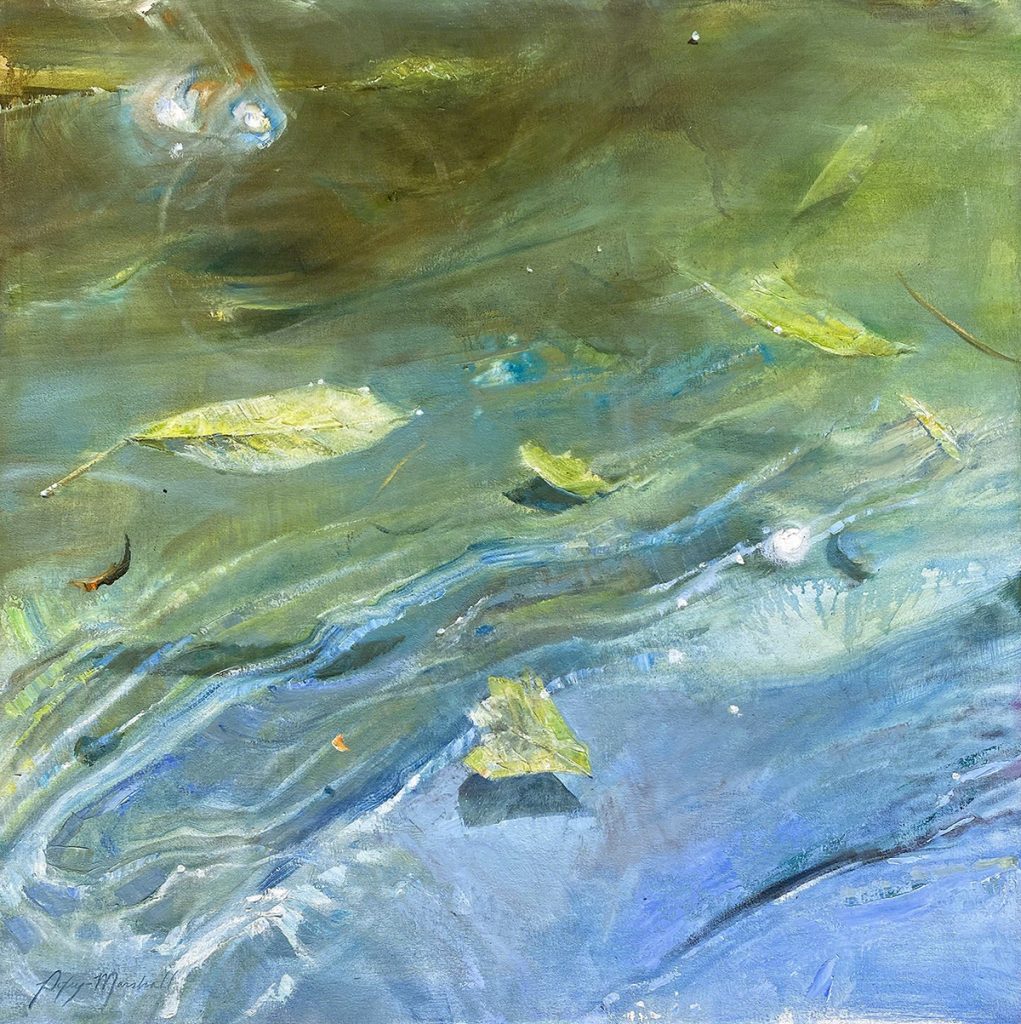 “Adrift” is probably the least appropriate adjective to describe the thirty-year, three state career of an artist who has worked in ink, oil, watercolor, tempera, textiles, and film, studied with some of Utah’s finest painters, earned fine arts degrees from BYU and U of U, taught, been collected widely, and collaborated on both painting a temple and exploring grand scale, immersive paintings. But “Adrift” is the perfect title for the first painting a visitor encounters in the Dibble Gallery, the one in which the virtual presence of invisible water brings it most perfectly to mind. What is adrift are half a dozen leaves and bits of organic jetsam, some floating on the water’s surface and some neutrally buoyant within it, while their cast shadows, along with a few radiant effects, provide the only proof that this is, indeed, a body of water. It’s not only about the optics of water, though: a corrugated bed that shades from mauve through blue and green to brown provides the eye a sensuously receding feeling of liquid space. 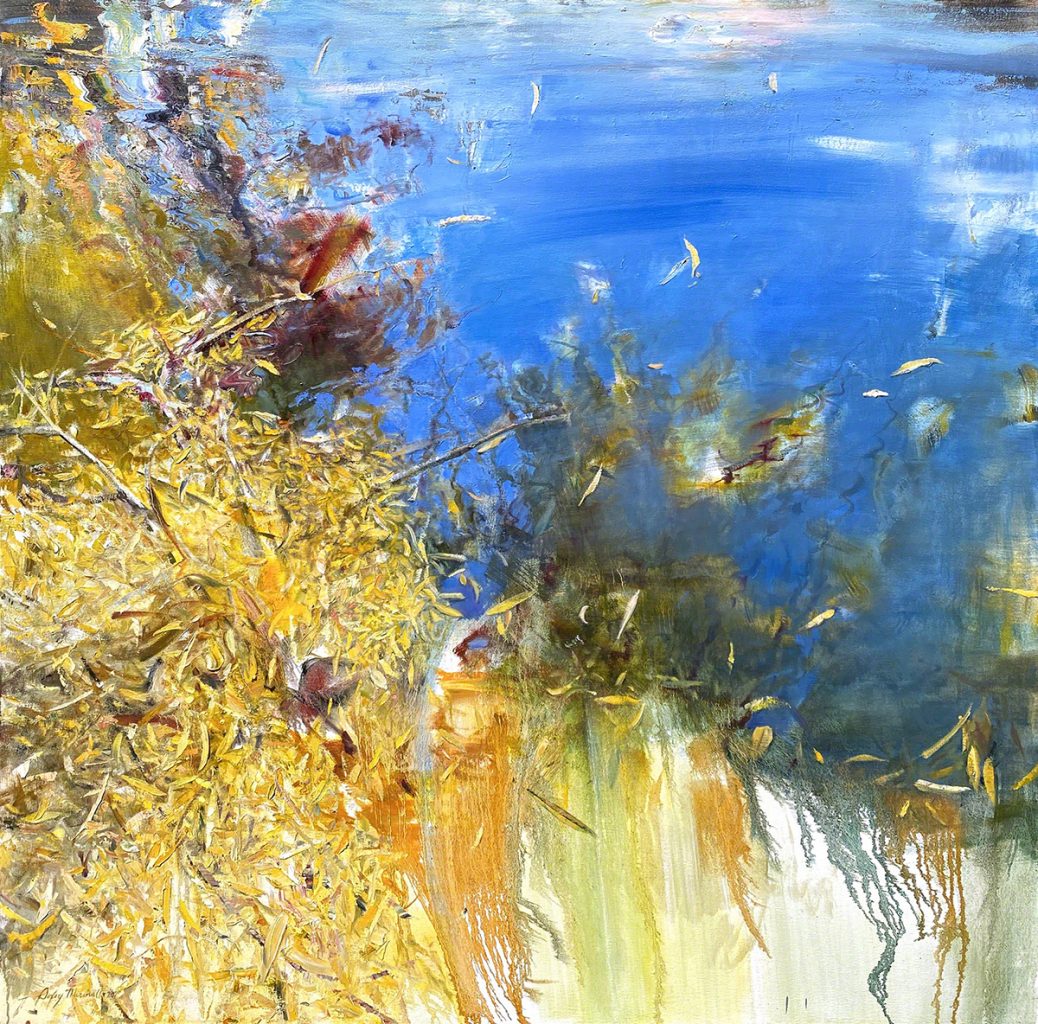 Representational painting fits onto a sliding scale. At one end, the painted image could be a photograph, or better yet a sheet of glass through which the subject is simply seen. On the other end, paint is dripped, smeared, sprayed, or brushed and looks just like itself. Individual artists locate themselves on that scale at different places: stand across the room and an image looks seductively real; walk closer to see how the magic is done and, at a certain point, it will dissolve into manipulated color and texture. With a given painter there is usually a point, or a narrow zone, where this happens. None of this, of course, is what the viewer is supposed to see; rather, it’s part of how the painter mysteriously controls what is seen. With Doxey-Marshall, though, there is often a continuity, with parts of the painting that open like a window into nature while others always look like paint. Consider the center of “Moon Gold,” where the pond’s surface reflects the tree branch extending above it so that it looks to be deep underwater, and compare that to “Beneath,” where not only the breadth of the brush but the length of the painter’s arm can be measured by the eye. 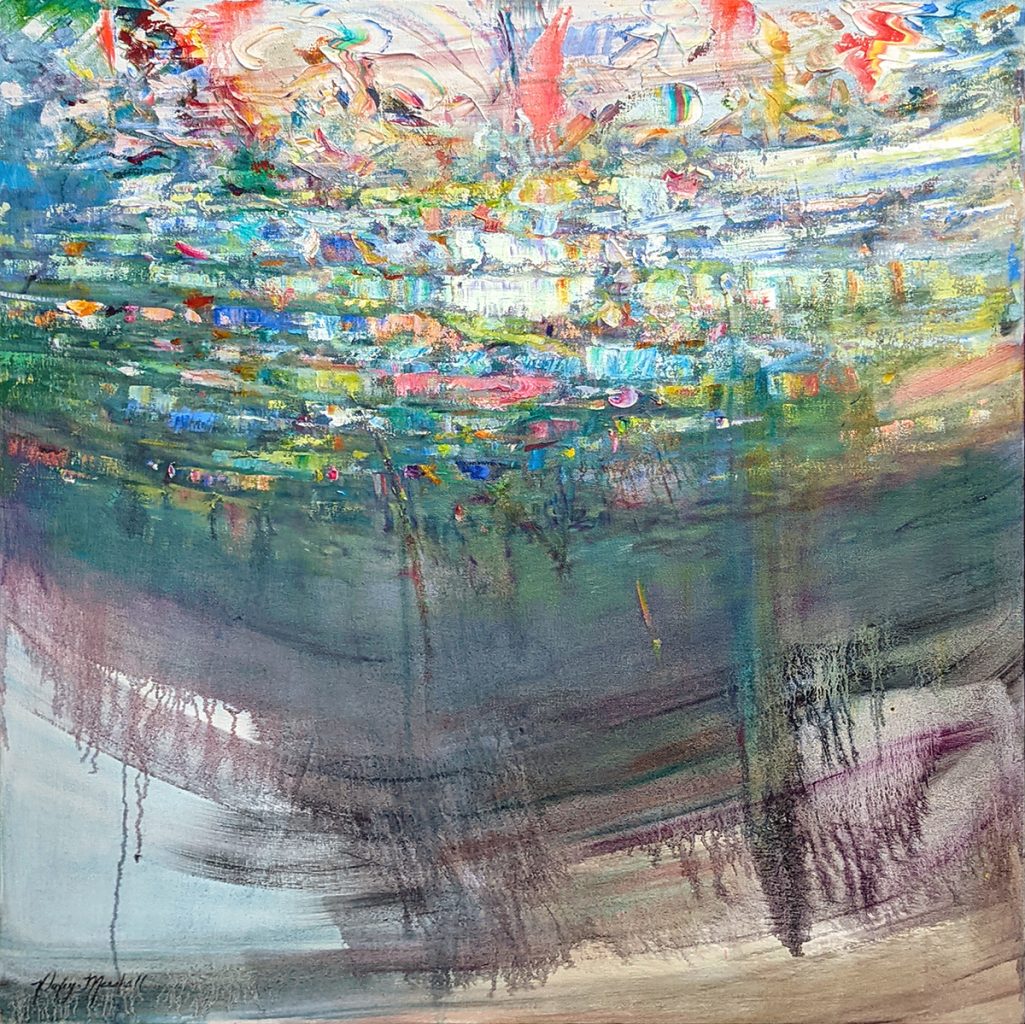 A frequent, remarkably fertile contribution in Immerse is made by the drips, sometimes singular but more often in shrub-like abundance. Some, like in “Water Curtain,” run straight down like their namesakes. Others twist and turn almost as if they were alive, while in “Light From Above” they dissolve as if some force — a strong wind, perhaps — had overcome gravity. Drips are among the most virtuosic syllables in Doxy-Marshall’s vocabulary, not least when it’s taken into account that they are both improvised and stochastic: single shot accidents she must control as they happen.

Two other effects are worth watching for here. One is what’s known to psychologists by the German word gestalt, which identifies a reversible pattern — baby blocks being a classic example — like the reflection and transparency of water. The other freezes the movement of water in such a way as to call it to mind. When the moon is reflected off still water, it’s just a white disk. But if the surface is gently disturbed, circular waves radiate and that reflection will begin to shimmer, dance, leap, and distort. Both effects are available in Doxey-Marshall’s art, but whether and when they appear is in the eye (and visual imagination) of the beholder. Part of what makes these images hypnotic is the way they, like bodies of water taking their place in nature, have life and freedom beyond the initial intentions of their maker. 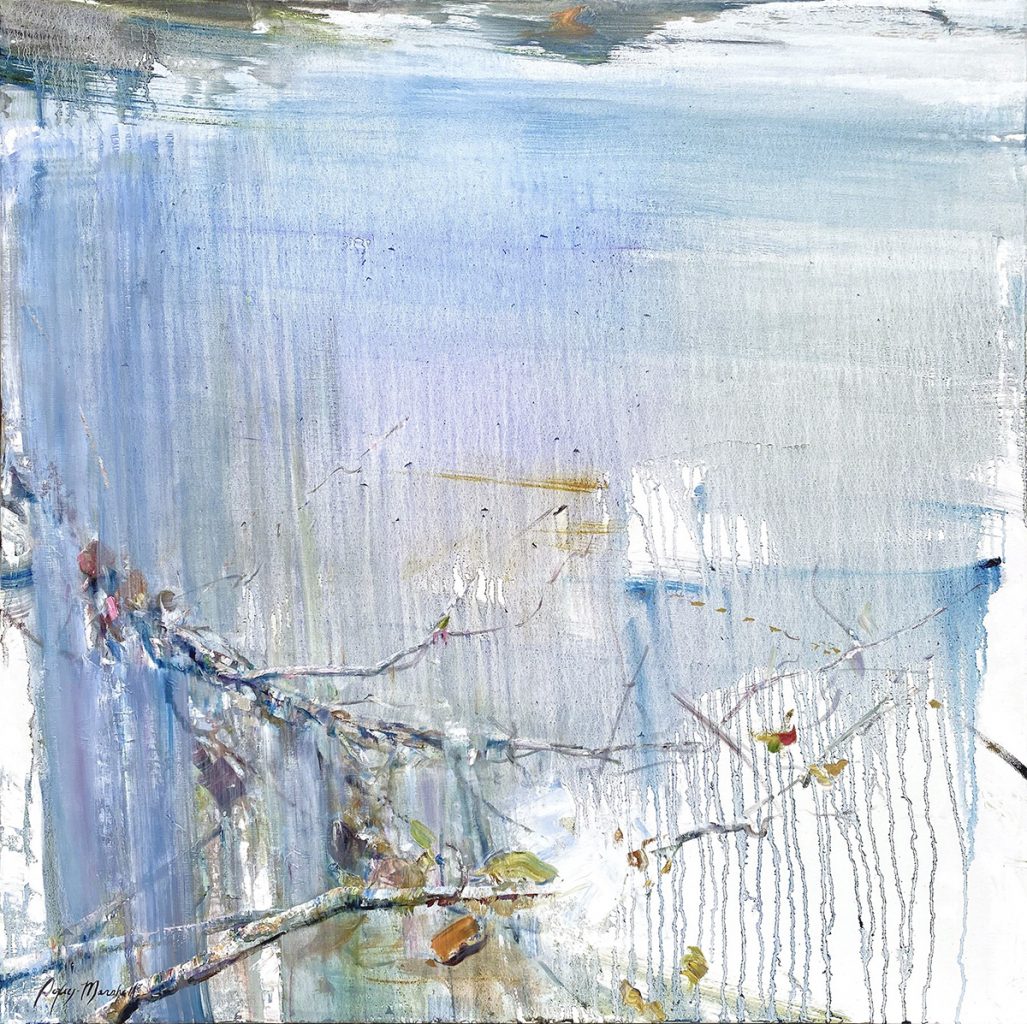