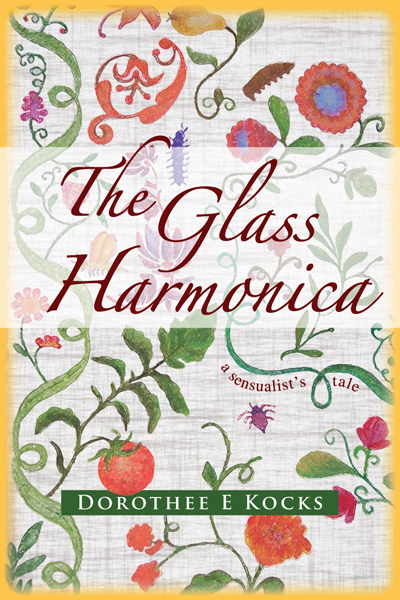 The history of the glass harmonica is fascinating. The invention of Benjamin Franklin, the instrument was once the rage of two continents. Mozart and Beethoven composed for it, women swooned at its eerie sound, and some towns even banned it as dangerous or immoral. Set in a harpsichord-like case, with a series of crystal bowls spun on an iron rod while the performer pumps a foot treadle, the glass harmonica is played by touching wet fingers to the spinning bowls – a parlor trick turned into a symphony. For over fifty years the instrument was a sensation in both Europe and the nascent United States. While they are still manufactured today, they are very expensive, infrequently played and almost completely forgotten.

To remedy that gap in our knowledge and embody her own passion for the instrument and its history, Dorothea Kocks has written The Glass Harmonica, an historical novel set in the early part of the 19th-century. In the novel, Chjara is a lowborn but well-educated Corsican who arrives in Paris as an indentured servant to an ailing merchant. At a séance where she first encounters the glass harmonica, Chjara meets and falls in love with Henry Randall. He is a young American abroad searching for a life beyond his Puritan upbringing, finding it first in science and ultimately in his love for Chjara. After a couple of false starts the young lovers arrive together in America, where the Catholic Chjara is mistrusted by the locals and spurned by Henry’s father. Seeking a fortune of his own, Henry becomes an itinerant bookseller, developing an interest in erotica that first came to light in Europe into a clandestine but profitable trade. From young love to parenthood and middle-life, the novel follows Chjara and Henry along the road of an America that is itself growing up, until a long-kept secret finally exposed threatens their happiness.

Kocks, who has a PhD in American Studies from Brown University, was trained as an historian and the large geographical scope of the novel allows her to explore the “backward” island of Corsica, Paris in the days of a still ascendant Napoleon, and the early American states searching for identity in a post-revolutionary world.  She compliments the novel’s love story with historical glimpses of a time – between the Revolution and the westward expansion – which occupies little space in our national consciousness. The Glass Harmonica discusses the rise of the entrepreneur, the risk-friendly banks that made that figure possible and the development of the concept of a free market; the clash between new secular freedoms and the traditional religious establishments; the era’s market for erotica (which Kocks continues to explore in an ebook); and the influence of the traveling circuit, which featured everything from scholarly lectures and musical performances to risqué books and traveling elephant.

The novel is also imprinted with Kocks’s passion for musical instruments. After writing a well-respected scholarly book, Kocks was climbing the tenure ladder at the University of Utah when a chance encounter with the accordion ignited in her a passion for old instruments that eventually led to her discover of the glass harmonica. Her writing is at its best when she is describing the instrument and the music it makes, no easy task considering both are unknown to her audience but so central to the lives of her characters.

These two strengths, Kock’s passion for music and training as an historian, are evident throughout the novel, and her book sings when the two harmonize. Her writing too can be energized, hitting beautiful notes: though the novel makes some large narrative and historical leaps, the scenes can be vivid and well-focused, as when Chjara’s attempt to learn English result in comical lexical misunderstandings. The writing, however, is not always pitch perfect. Dialogue that is explained, as in early sections of the book, can squawk like a glass harmonica touched, as we learn from Kocks, with the wrong water; and while historical detail is one of the reasons we turn to a book like this, it should be intricately woven into the fabric of the novel’s present — when it comes in the form of authorial intrusions, breaking the world we have immersed ourselves in, the result feels like a musical performance explained by a lecturing professor. Historical fiction need not be simply genre fiction. It can also be great literature (as Hillary Mantel’s two volumes on Thomas Cromwell or Jean-Christophe Rufin’s recent novel Le Grand Coeur demonstrate), and one hopes any book asking for our attention would aspire to achieve it. In The Glass Harmonica, Kocks has given us an expansive love story, and lenses with which to view an intriguing time in America’s history, but disappointingly fails to find the authorial voice to sing her score.

Dorothee Kocks’s The Glass Harmonica: A Sensualist’s Tale, published by Rosa Mira Books,  is a 2011 Utah Book Award Finalist in the Fiction category. Winners of the award will be announced October 5.

Kocks has also published a companion, non-fiction app Such Were My Temptations: Bawdy Americans 1760-1830. And in October her company Beware the Timid Life will be presenting a webinar DIY Book Apps: New Frontiers in Storytelling (more on that in a future post). To learn more about the author visit www.dorotheekocks.com.