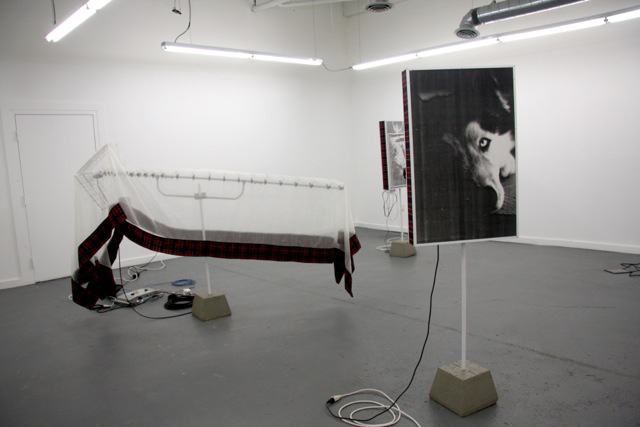 Such desperate subjugation of self, in an effort to pair with another, to mirror love, to feel heard, feels strained and achingly heartbroken when recorded by Thom York. The song is a ballad, but a haunting one, for if true love is waiting, it is at a cost of the individual self which moans with all the vulnerability of a single voice and single guitar.

Radiohead’s 2001 single serves as the title for Maxfield Hegedus and Suhnee Venice’s current exhibition at CUAC, which hedges on the failed communication between two entities. Like the desperate strains of the song, the exhibition positions two artists, whose work revolves around each other without resolution.  There are devices for communication, such as a microphone, a speaker, and an antenna, yet such efforts at connection are fractured and failed. While one piece does speak, it’s in a computerized voice not a human one (or an angelic one as the case may be), and recites Peter Handke’s poem from Wings of Desire: “When the child was a child, it had no opinion about anything, had no habits … and made no faces when photographed.”

This poem is continually recorded by the microphone in the gallery, as are the comments and movements of the visitors. But the child doesn’t speak, doesn’t offer an opinion, and true love doesn’t wait. Rather, the revolving photographic sculptures move around each other like a sales pitch, a marketing effort, all posturing and spin without substance; the captured sound just echoes back a vanity mirror of the other voice without process, drowning its own.

If not true love waiting between two people, then maybe it is the love between the watched and the watcher, in this the age of continuous surveillance. The footage of a fish tank in a restaurant, holding several goldfish, being broadcast on a seemingly discarded iPad on the floor, echoes the work of Eva and Franco Mattes. The fish are being watched, the restaurant as well, but for what end does all this data accumulate?  What does it ultimately communicate? Does it capture the living reality of the human experience in the everyday or does it just kill time through existential nothingness, through the trivial and the fleeting? Similarly, the notion of a veil (as in surveil) is made physical by covering the antenna with sheer cloth, a form that most certainly references Duchamp and a fish bone simultaneously.

The exhibition is organized by Michael Thibault, who runs an eponymous gallery in Los Angeles and is the first of a number of small group shows that will be organized in spaces away from his gallery. The show runs through March 11. This is the second time the artists have exhibited together, having recently participated in Playing Pool with Eggs, a show curated by Tobias Spichtig at Galerie Bernhard, Zurich, CH.